This is another interesting subject that there is lot more to it.
Whilst I have no details of a factory fitted wheel offered for XK120’s
Nardi of Italy
did make an correct wheel designed to take original horn push button for an
XK120
see pic in Roland Urban book page 175 bottom. Luckily I do have one of
these.
I have also seen a Bluemels wheel the wire and plastic type fitted to the
MGTC and TD to suit an XK120 with original horn push button but not sure
whether
this made by Bluemels or fabricated by someone.
The original XK120 steering wheel adjuster knob has impressed into it
“Adjustable Wheel Bluemel’s Pat. no 494902” and maybe the entire steering
wheel was made by Bluemels?
The same applies to the XK140 there was no factory offered woodrim wheel but
there is standard Nardi pattern that was fitted to several European XK140’s
and mainly coachbuilt cars and given that this wheels is a standard fitment
on a Ferrari or something I do not have one
On the XK150 George Camp is totally correct in what he notes see piece below
that the woodrim wheel was noted offered as a proper catalogued item, but
there is always a “but” 0n the 25 November 1958 E W Rankin wrote to Sir
William Lyons
noting he had asked the Sales Department to provide him with a complete a
list as possible
of all extras available and supplied and he noted he was amazed at the list
he goes on to
note 90% could be omitted from any published list of extras and then went on
to ask Sir William
if he would put a tick against those he would wish to be published!
I have copies of the original handwritten document dated 18 November that
starts off
by saying that the 5 page 35 lines per page was by no means comprehensive!
Anyway the list of items makes very interested reading a couple include

instrument panel in matching leather XK150 DHC : this was relatively

Tonneau cover XK150 DHC : I have actually seen a new one of these

But back to the subject at hand a “Bluemels wood rim steering wheel” is
noted on this list
at a retail cost of 12 pounds 10 shillings plus 6 pounds 5 shillings
purchase tax.
I have never seen in any jaguar stuff something that resembles this in any
period photos or
information and certainly nothing that looks like the MGA wheel noted on the
web site
http://www.pbase.com/mdlempert/mga2 and being the original non believer
would need
documented proof that this MGA design was in fact the one that Jaguar used,
I will admit I haven’t carefully looked through English Autocar, Motor and
Autosport magazines
where a lot of these accessories are advertised
The Derrington wheel was certainly fitted to a great number of XK’s by the
late 1950’s and in the
early 1960’s and my own XK150 “S” Tour de France S824021 had one fitted by
1960.
A another fairly common after market fitment was the Les Leston range of
wheels and one I have
seen one on an XK150 that had an engine turned finish and a pressed
signature for “stirling moss”

“woodrim”
http://www.pbase.com/mdlempert/mga2 If anyone recognizes this
wheel from a 150, please let me know.

Terry thanks for sharing that. Are there any part numbers given for
these ‘‘options’’? Also do you know if at that time Jaguar was the
main dealer for the Coventry area? I know they ran a service
department till the 80s but seem to remember Alice Fenton handling
sales for the area.–
The original message included these comments:

Tonneau cover XK150 DHC : I have actually seen a new one of these

But back to the subject at hand a ‘‘Bluemels wood rim steering wheel’’ is
noted on this list
at a retail cost of 12 pounds 10 shillings plus 6 pounds 5 shillings
purchase tax.

Hello Terry. Thank you for the very interesting post. The Nardi
wheels from that era were very elegant and available up until at
least the mid to late 1960s. They were available for an assortments
of cars, including Porsche. They came complete with boss and had
blind rivets securing the wheel to the boss. The trim rings were
machined after riveting, creating the blind rivet effect. A Porsche
version can be seen here:
http://www.pbase.com/mdlempert/porsche_nardi

There was at least one wood rimmed banjo wheel produced by
Bluemel’s that I am aware of. The one I’ve seen had been fitted to
a MG T series car. It was in very poor condition. It appeared to be
a veneer pressed onto a hard putty-like substance.

The MGA wheel, which is what I started this thread about, I have
seen referenced as having been made by Bluemel’s. It was often
referred to as an Italian ‘‘style’’ wheel, but that was not to mean
it was made in Italy. It is not likely that Nardi was the maker.

A customer sent me some pictures of an XK with this wheel mounted.
The pictures were taken in 1962 and can be seen here:
http://www.pbase.com/mdlempert/jagxk Through a search in this
forum I was able to find reference to this wheel in a post from
several years back. Here is the text from that post:
‘‘Skip: My 150S OTS has a wood wheel but originality is uncertain
even though it has been on for decades. Many British cars like MG,
Jaguar, Austin-Healy, Triumph had nice aftermarket wood steering
wheels (made, for instance, by Nardi) installed SOON after purchase
due to the bus wheel size of the original steering wheel !! The
Nardi wheel for the MGA is SIMILAR in appearance to the factory
optional wood wheel, but it does differ in a number of details. -
Dave Quirt, 150S OTS, Mk II 3.8, MGA Twin-cam’’

I wonder if that fellow is still a forum participant and if he
could elaborate and provide pictures.

Coventry Timber Bending (CTB) was indeed the maker of the wood rims
for several types of steering wheels. I have only seen their rims
on factory wheels, but that doesn’t mean they didn’t supply others.
It is my belief that CTB only produced the rims, wood being their
core competence. The metal and assembly of the wheels were likely
done elsewhere, either by the factory or another outsource shop.
There are some traits with their rims that I can recognize as being
theirs. Their rims can be found on the D-Type wheel, two different
Healey factory wheels, and the MGA at subject here.

I wonder if you could provide copy of pictures for the steering
wheels you have noted - and the CTB information as well. I would
very much appreciate having this information for my records.

Interesting topic, somewhat unrelated, what about this steering wheel that was on my '58 OTS S830675DN? It has wood overlay spokes on what seem to be narrower steel structural spokes. I am under the impression that standard spokes are just painted steel, but with the same apparent width as these finished wood pieces. Was this a legitimate option? (I replaced with a Moto-Lita). 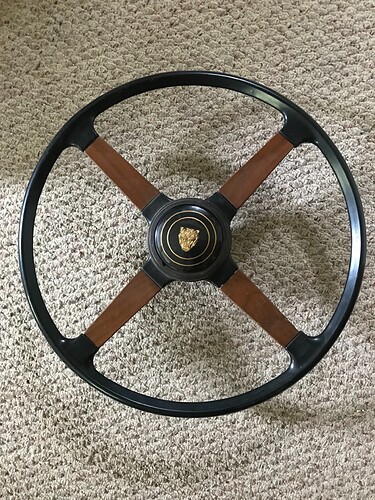 the original wheel was completely covered inc spokes with moulded plastic but it cracks and peels of as per crack in back of your wheel.