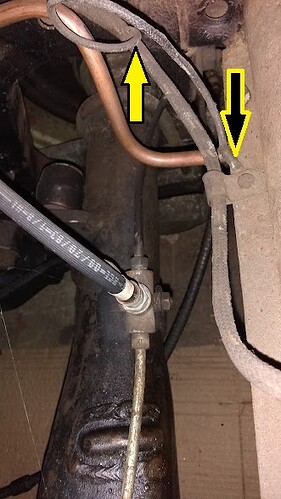 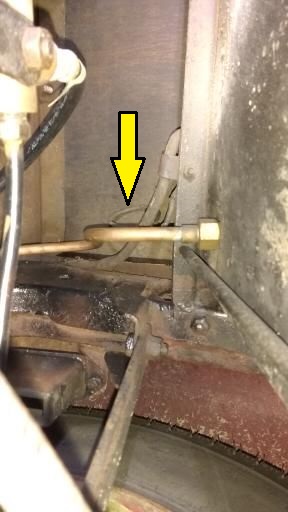 Mocked up the fuel tank today in 112F degree heat. I wanted to make sure I was drilling the stud holes in the right places in the tray. It turned out that the builder of the tray had suggested the right places. If you look at the second picture you’ll see holes in the channels but they do not go through the tray. This exercise also allowed me to start with the right lengths of round stock for making the hanger studs. 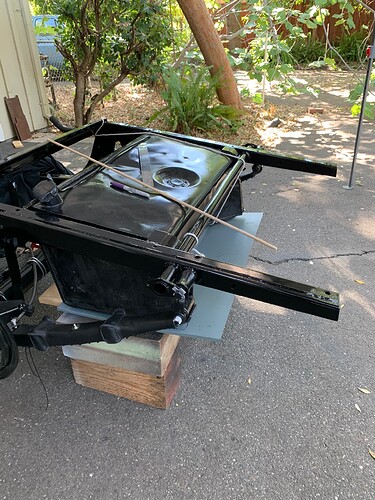 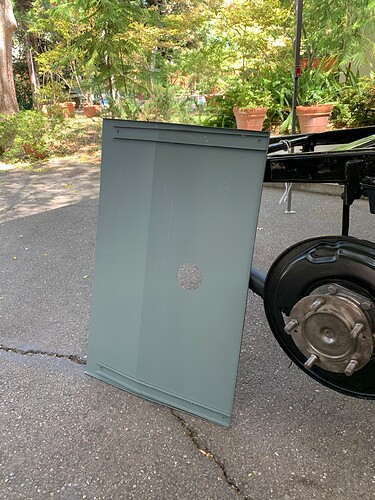 Hello, I just got my new fuel sending unit from Moss. I noticed it had two terminals. The ohmmeter readings are as follows:

I thought the second terminal may be for a warning light within the gauge, but not. Can someone please enlighten me? Thanks. 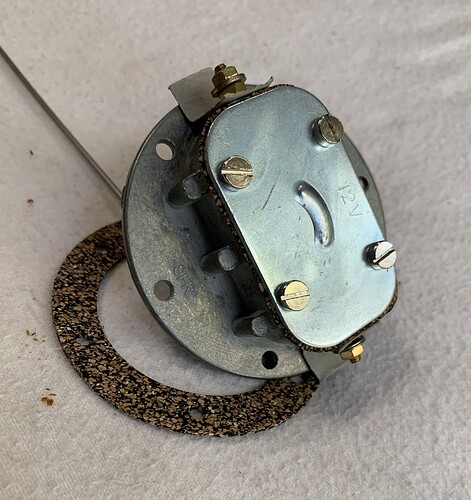 It is indeed for the warning light inside the fuel gauge. 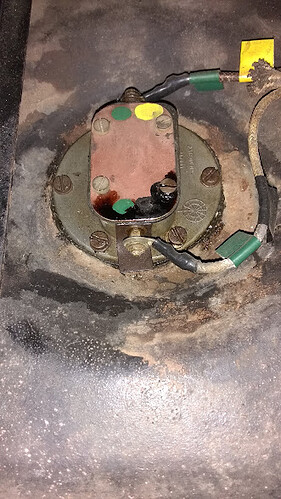 Green with yellow is the light circuit.
Green with black is the level sensor circuit.
As I recall, the float goes forward from the hole in the tank where there is plenty of swinging room for it to operate. 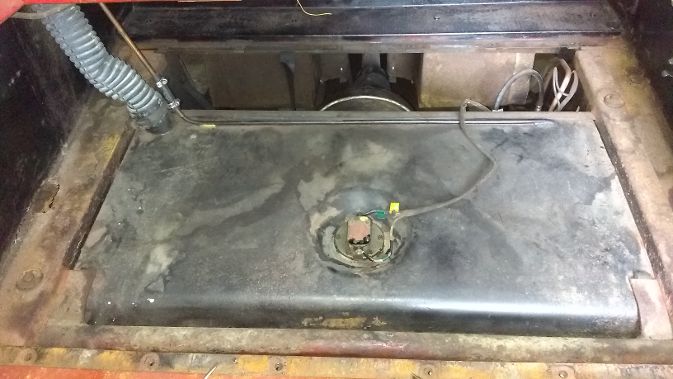 Thanks Rob. Interesting, the ones I’m familiar with, the warning light is an open/close contact, but this one transitions.

Hmm, it shouldn’t. Open it up and let’s see what’s inside.
There should be two wiper arms that move with the float arm (yellow and green arrows).
Both touch the sides of the resistor, wiping along it as the fuel level changes, and making a resistance ground with the green/black wire.
One (green arrow) touches the warning light contact arm (red arrow) when the float is low, and making a direct ground with the green/yellow wire. 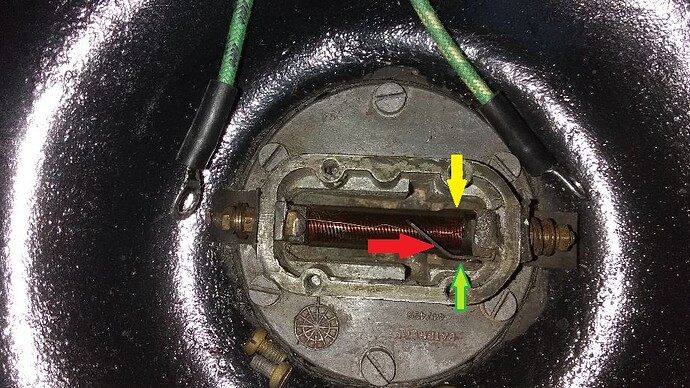 Be sure to get it working before final installation of the instrument panel. If not, you’ll be laying on your back under the installed instrument panel with your test meter and tiny socket set. If the brass bridge isn’t connected properly, the fuel gauge itself will function normally, but the low fuel light will not come on.

As I recall, the light bulb will not stay in place without it.
Here it is with the arrow. 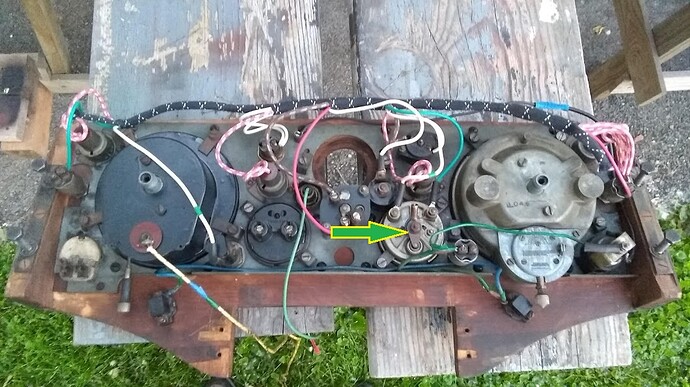 BTW today I discovered my modern Jeep has a low level light. What good idea comes around goes around I guess.

Here’s a picture of the inside of the new sending unit I just got from Moss. Thanks. 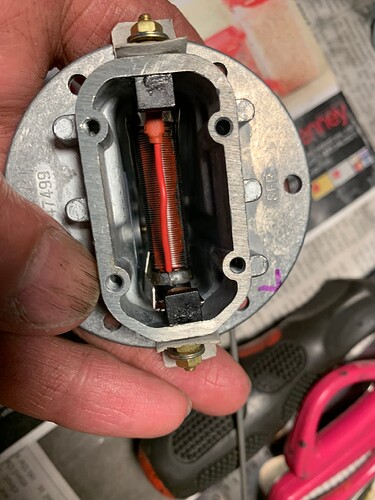 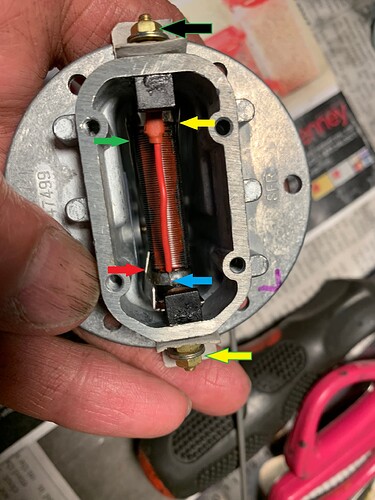 A-HAH! The red/brown blob and blue arrow are on the wrong ends.
Compare it with mine, where you can see the solder joint on the opposite end from my 3 arrows.
So I believe the maker has connected your resistor backwards.

Good analysis, Rob. Thanks. I’ll send it back and keep looking for another.

It started cooling off here and I’m making the hanger studs now. Bernard had measured 12-3/4" and 8-1/4". I made one of each and I’d say that’s just about right for my new tray. Both the UNF main nuts and the jam nuts are machined on one side. Not to be splitting hair here, but do the machined sides face each other when installed? Thank you.

Yes, the idea is slightly more surface contact area and thus more friction to keep them from vibrating loose.

Take a look at the photo of the original nuts I posted earlier in this thread. I forgot that the front 2 had the nut welded on top.

Among other things, if you compare the original sender to the Chinese junk available you can see the wipers are very flimsy.

West Valley Instruments in LA is a great rebuilder.

I may have a NOS sender in my parts stash, I will check and let you know if I do.

Thanks Mike. Moss offered to send me another sending unit. I wished I had known about your NOS.
Let’s see if the replacement will work as intended. I made the studs and the nuts today based on Bernard’s measurements Mike Balch’s photo. 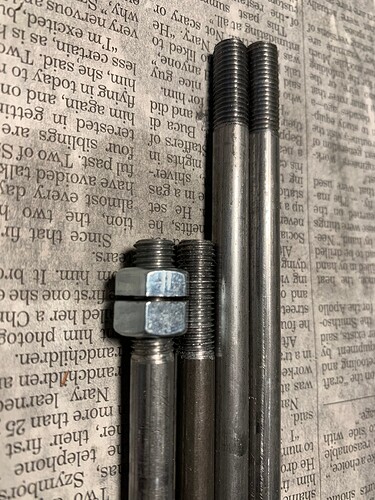 I got my replacement sending unit from Moss today. Here are the new measurements.: