In reply to the question of what is the correct oil for the XK120 Moss
gearbox:
Over the past 15,000+ miles, I have tried SAE30, Redline MTL, and 75W90
hypoid lube in the Moss/od box on my Mark IX. I felt that the 30W required
slower shifts fo prevent grinding. The Redline worked well, but leaked a
whole lot. I have been using 75W90 gear oil for around 10,000 miles, and it
allows faster shifts without grinding, with minimal leaking from the seals
and gaskets. I will drain it in the near future, and check for any signs of
bronze particles.
Greg Bernier
XK120 DHC, Mark IX, XJ6 Ser. III

In reply to a message from Greg Bernier sent Fri 6 Oct 2006:

hypoid lube in the Moss/od box on my Mark IX. I felt that the 30W required
slower shifts fo prevent grinding. The Redline worked well, but leaked a
whole lot. I have been using 75W90 gear oil for around 10,000 miles, and it
allows faster shifts without grinding, with minimal leaking from the seals

Old thread (and there are quite a few on this topic).

I just wanted to comment on my experience going from old-school Mineral to new-school MTL.

Went for some time to Redline MTL, shifts were nice (but they were before as well, allbeit a bit better with MTL). I was surprised to see drops of transmission oil on the garage floor (not much), so yes, it does leak more and also my impression is that the gears whined a bit more with MTL.

Now back to old school 85W140 during summer, NO LEAKS (not even a drop). Gearbox seems to me quieter as well… but it is true, synchro is slower and shifts just less slick (placebo?).

So two cents on a tired topic, I think I stick to old school for this.

When my rebuilt gearbox came back from Vintage Jag Works it had a label attached which said: "IMPORTANT! Shipped without lubricant–Fill with 30W non-synthetic, non-detergent motor oil. DONOT USE GEAR LUBE!!!

Sure, but there is no black magic: a 85W140, non-synthetic and neutral to yellow metal is used in many Moss boxes, perhaps all. Yes, the synchro cones may not like friction modifiers but for example Dynolite has classic formulations with few, but what else is there to fear? 85W is same viscosity as SAE 30, right?

Never heard of anyone using SAE 140 in a Moss gearbox. That’s for steering boxes.
There are bronze bushings inside the gear wheels. 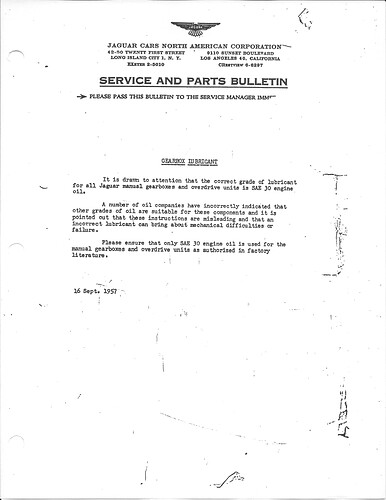 This is the product. It states clearly safe for yellow metal and specifically for gearboxes. Mine did not particularly whine, but please, any concerns, do tell me. What would be the effect of 85w-140 Dynolite on Moss boxes with over-drive?

Apparently not possible to use. I guess cold viscosity would be too high.

The overdrives seem to work with a variety of oils. EP90, ATF, SAE30 at least. It will probably tell you if it doesn’t like it.

Back in the day (that’s more than 30 years ago), I tried a range of lubricants deliberately or by accident (when a mechanic put hypoid gear oil in). For me, ATF was best for change quality. When/if I get my Mk2 running again with its Moss box, I’ll try the MTLs such as Castrol Syntrans.

I note the Dynolite products do not include the initials SAE before their product numbers. This would suggest that their viscosities are not guaranteed to conform to the standards created by the Society of Automotive Engineers.

Hi all and Rob,

I took all concerns very seriously (many thanks): being explicitly GL4, yellow metal safe, I poured it and drove.

Was considering driving with the XK to Brussels, but lacking (I did not ask for it yet) the green pass to enter the center, I took the XJSC (also nice weather, so open top is good).

This weekend we will put 300-500 Km on the car with my wife and will report later.

it would seem that the Jaguar factory printed service instructions that call for SAE 30, and which are emphasized by the publication of a much later service bulletin, would answer the question and close debate on grade. Now we can talk about detergent or non, brands, old oil and new oils, Multi grade engine oils started to show up around 1954. The Jaguar factory in 1957 still emphasized single grade SAE30.
some history: 1930s–1940s
Additives to inhibit oxidation, resist corrosion, enhance pour points, improve viscosity indexes, and more emerge in the 1930s. From the 1940s, they are widely used in lubricant formulations, especially to prolong the performance and service life of automotive engine oils. Prior to this time, engine oils without additives would typically provide only up to 80 to 100 hours of service. Also, the late 1940s marks the beginning of systematic oil analysis: The railway industry begins using it in an effort to avoid engine failures.

1950sSynthetic lubricants are developed, primarily for use in the aviation and aerospace industries. Multigrade automotive engine oils are introduced.

Further to your “warning” regarding gearbox oil, I would like to add the following instruction from Laycock for the use of oils in Overdrives.

Attached is an interesting read about OD oils by John Esposito of Quantum Mechanics.(https://quantumechanics.com/) They are excellent rebuilders of British gearboxes and ODs.
Sorry for the lengthy attachment but their site is under construction

anti friction additive is in many modern car oils…to lower fuel consumption…and meet EPA thresholds and advertising for fuel mileage. Motorcycle oils for wet clutch engines do not have any friction modifiers. Nick

Thanks for the replies.

I do not see this as any warning, SAE30 is the factor spec for the oil, and the GL5 issues with yellow metal, as well as the creeping ability of synthetics are clear of a warning to me.

OD and friction modifiers are also a clear clear no go, as are higher viscosities. But -I think I understand your message clearly Nick- oils have gone a long way from the 30’s, putting a friction modifier in an OD, that works on friction is rather odd. But some people also put ATF in their power steering systems, and they find this normal.

My only message here, was that with MTL, the gearbox -mine at least- really leaked, but performed well. For the rest I do not see any technical issue with a GL4, but will of course not debate about it.