Question: In what book can I find the greatest concentration of pictures of
the “lightweight” XK-120’s? I would like to see good shots of the exterior,
interior and engine bay of one of these cars.

Bonus question: are any of the three currently in the US? If so, is it
possible to see one at a concours, rally or vintage race meet?

Daniel,
Unfortunately there has not been much coverage of these 3 cars in books.
There was a story of LT1 in the Summer of 1990 of the Jaguar World magazine
by Paul Skilleter and I believe he did another story later on. The only one
in the US is owned by Tom Hendrix in Maryland. I don’t believe he shows the
car. I think it is in need of restoration. The other 2 are in Japan and
Europe.
Regards,
Terry

One of the 3 is in Washnigton DC. I contacted the owner a number of years
ago. He was most friendly. Unfortunately I do not remember his name.

However, the car was sold to the current owner, many years ago, by a friend
named Michael Tillson. Michael can be contacted through his work on
1-215-473-6400.

Question: In what book can I find the greatest concentration of pictures
of
the “lightweight” XK-120’s? I would like to see good shots of the
exterior,
interior and engine bay of one of these cars.

Bonus question: are any of the three currently in the US? If so, is it
possible to see one at a concours, rally or vintage race meet?

Any way to get ahold of Tom. My grandpa Chuck leighton raced lt3. I have pictures, stories and a letter from sterling moss I would like to get back with the car.

I believe LT2 used to be in the @Wiggles family. He may know something of the other two lightweight.

Contact Chris Jaques: he may have the info you need. He owns LT-2, the one my "rents raced.

As it turned out, Stirling never officially drove any of the LTs, in any official races. We thought as much, and so did Stirling (but, it was 1963, and by his own admission, he was still foggy from his Goodwood ‘off’), when he signed the tail of the Silverstone, but deep historical research by Chris showed he did not… until he drove it, in 1963! Traditional games from Jaques of London online games shop, include English games for children and family games such as board games and outdoor games

Anders Clausager’s book, “Jaguar XK120 In Detail”, has some information on the Lightweights (pp175-176). The book was published in 2006 and he notes that, “Tom Hendricks in Washington acquired the car (LT3) in the 1970s. He still owned it in 2005.” There is one photo of Bob Berry’s car which used the LT1 body on chassis #660917 and it shows the smaller doors, lift out bonnet with louvered panel and the solid rear bodywork with no boot lid.

which used the LT1 body on chassis #660917 and it shows the smaller doors, lift out bonnet with louvered panel and the solid rear bodywork with no boot lid.

I believe all the LTs shared those features.

Yeah. I have what my grandpa told me. Long range Fuel tanks in rockers that’s why the doors were short. If I recall correctly he said one car got destroyed and one got a Chevy v8, they sold it for nothing. He could have retired nicely had he kept it but at the time it was just a used race car. He drove it I’m assuming flat out from St. Louis to Sebring and got extremely wind burned. It was straight pipes so as an old man he was pretty hard of hearing. I have his road America 55 trophy and several others. He raced a bunch of different cars but the silverstone was very special. Probably the rarest jaguar race car.

I have that book. Never been able to track anything down. Been trying off an on for 6 years to track it down.

Long range Fuel tanks in rockers that’s why the doors were short.

Certainly never such a thing in LT-2.

For an old, beat-up race car, it was exactly what it worth! Had I pressed Dad, I suppose I could have kept it, but…!

I would never been able to do, financially, what Chris did with it.

Is your dad still alive?

No: Dad died in 1997, sadly before we ever found out what became of the car.

Contact Chris through the information in the link above, to his company.

My father and grandpa have both passed. I want to get the stuff back with the car before I’m gone and it disappears

You have the car?? Cool!

No, I just have stuff that needs to be with the car. I’m not finding his business contact information. I’m looking but Not seeing it.

Contact Us  Have a Question? We would love to help.  Real Customer Service is one of our Core values so we will always try and go above and beyond for our customers.  If you cant find what your looking for on our website please...

Without being pretentious, I tried to compile the “LT Story” in an article that was published in 4 parts in the XK Gazette from June till September 2017. In Part 4, three pages are devoted to your granddad Chuck. In short:
Late 1952 Charles Hornburg sold LT-3 to Art Feuerbacher of St Louis and your granddad was invited by Feuerbacher to race LT-3 during the 1953 season. He attended at least 6 races that year. Late 1953 he bought LT-3 from Feuerbacher and continued racing the car for the 1954 season although only occasionally and “close to St. Louis”. There was probably another owner in the late Fifties before the car was sold to Bud Eiler of St. Louis. In November 1970 the car was sold to Jack Reuter (also of St. Louis). See more info here: www.cliffreuter.com. Finally in September 1974 the car was sold to Tom Hendricks (Washington D.C.). 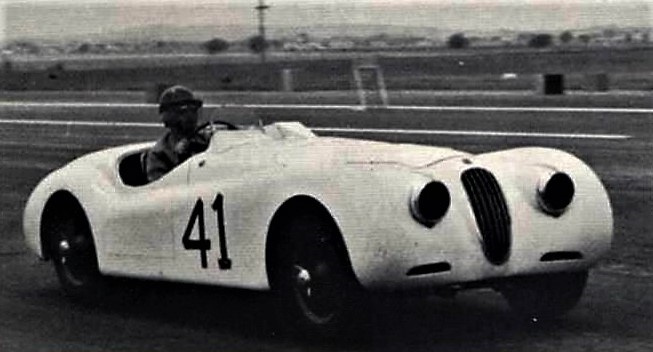 You could ask the XK Gazette people (Porter Press) whether there are still copies of those magazines available (or at least the one with your granddads info of September 2017 (number 240).
If not, send me a PM and I will make a copy of that part on basis of my original script.

Funny: 41 was my ‘rents’ racing number, for most of their racing career!