I found this bit on paul borel his car is currently listed on the XK Data
site no owners name but where is paul?.

Paul Borel
And from the U.S.A., Paul Borel of Hollywood writes of his XK 120 roadster
which has won so many Best of Show and First in Class awards in Concourses
from California to Florida that he has had to retire the car .from events
for lack of competition.
The car is completely original with all parts being repaired where
possible or replaced with original items, even down to the cigar lighter
element and the spark plugs marked “Made in England”.
To the best of the owner’s experience he has not seen a better restored car
and he would like to express his thanks to all those who helped especially
the late Ken Bowen of Jaguar Cars and the present Chris Thorn who has been
invaluable in his assistance on 671275.
Paul includes a few photos of his car along with a letter from the President
of the Rolls-Royce Club of America who says that “in 15 years of judging
cars… I have never seen a cleaner car with all the accoutrements so neat
and flawless…the most amazing thing is that this car was driven to the
(Florida) meet from the West Coast yet showed absolutely no signs of being
driven one inch since restoration - absolutely fantastic1.” Photos: Top; -
the car itself (the design on the LHF wing is the owner’s personal crest),
while the bottom photo is rare indeed; a genuine full undershield for the XK
120 as used to be an optional extra and as was used by the record-breaking
I32mph Jabbeke 120 in 1949* All hail.

Hey Terry
its very interesting and im very happy to read that Story. Its unbelivable for me. Since 2016 i´m the Owner of the XK 120 671275 you write about. The Car is still in a very good Condition, shows some small signs of using, bit still a beauty. Do you have some old Pictures and also Documentation from the Car!? It would be great, if we can get in touch. 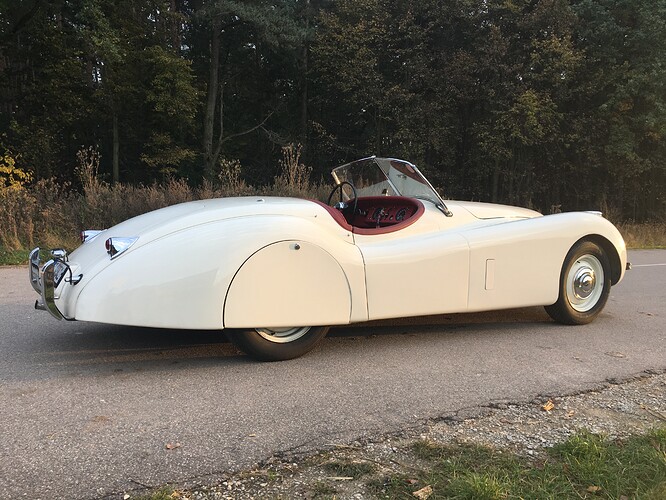