Did I say that? I did not. All said was that I now have photos of all five engines known to exist. The last photo was from Australia yesterday.

I think you can upload pictures now, at least that’s what it says. In the field you use to write your text, in the top row, there is a little icon with an upwards arrow. On mobile devices it is in the bottom right corner.
The rest should be self explanatory. Thanks!

Was it such a big deal to include balancing shafts back in the day?

No upward arrow, but not fussed for the moment. It’ll arrive. As regards the extra cam lobe, I am led to believe that the older SS engines had this too, so this was probably carried forward. So many loose ends to tie up, and each loose end seems to give birth to another. The time line of my engine is now complete, in that I know who first had it from Jaguar, who had it after that, and so on until it went to auction in 2005 and then I acquired it. I have the sales brochure from the sale too.

My engine was the sole surviving 4-cyl “XF” precursor to the 4-cyl “XK” series of engines. Capacities ranged from 1732cc to 1970cc. Quite a few 4-cyl XKs have survived (as blocks at least) and there are certainly more than 5 worldwide.

Here is one being given the beans on a dyno: 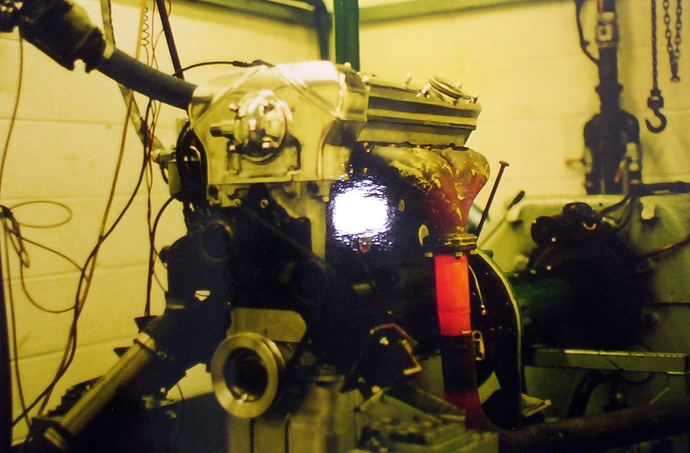 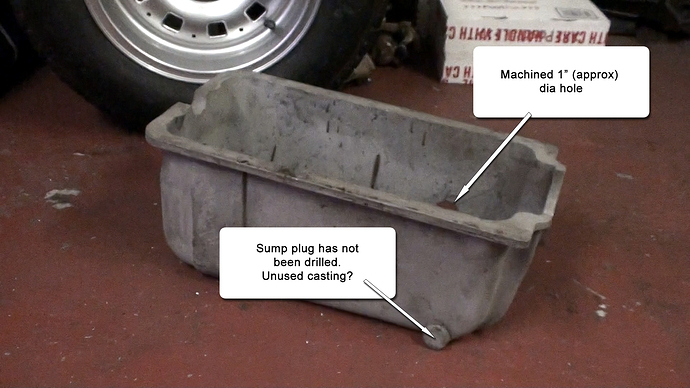 And head detail showing the purpose of the extra “damping” cam lobe (the boss shown contained a spring and follower for the extra lobe). This detail wasn’t carried forward to the XK100 engines. 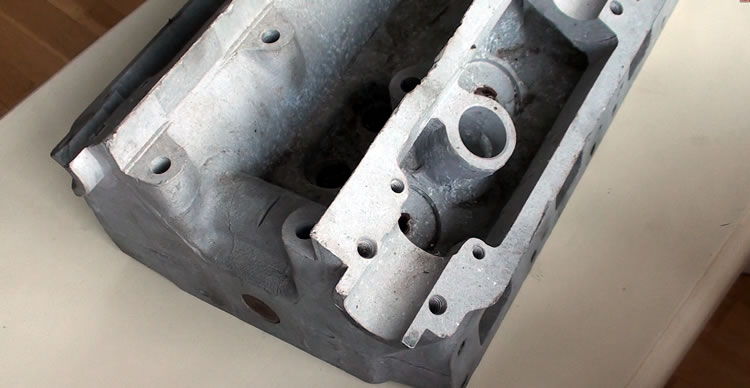 And what were the dyno numbers?

Also, what was the purpose of this “extra lobe?”

As far as we could tell, it was an attempt to reduce vibration in the camshaft - didn’t work! 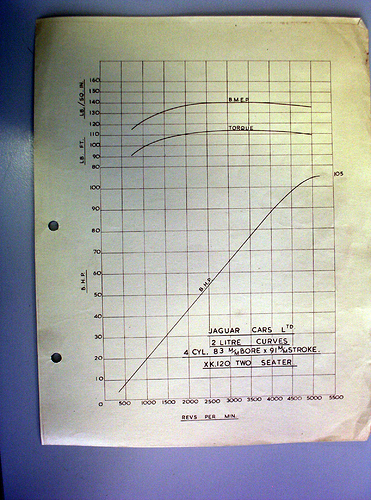 That’s the second photo of an XF engine I have seen recently - in fact in my life! - and the other one has half-moon cam covers and seemingly from the photo but three studs. I have been asked not to publish it so I can’t show you. could it be another prototype at all?! This the number on the block of the engine i have acquired.

Others I have seen have an oil level gauge in the sump on the left hand side.

Here is a photo of the “balancer” cam 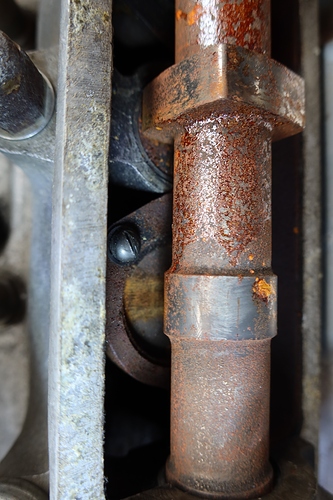 One of the XK 4-cyls was installed in “Goldie” Gardner’s record-breaking car (now in the museum at Gaydon). When run on pure methanol it achieved a maximum of 140 bhp @ 6000 rpm 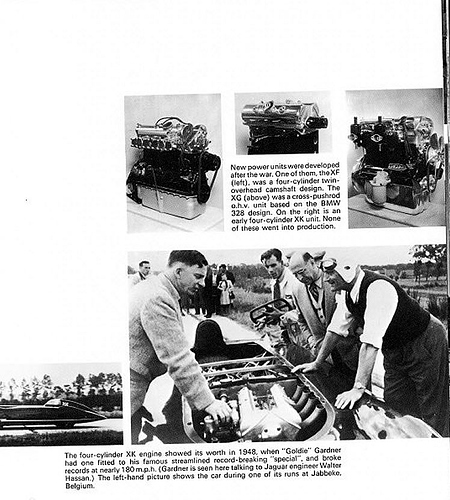 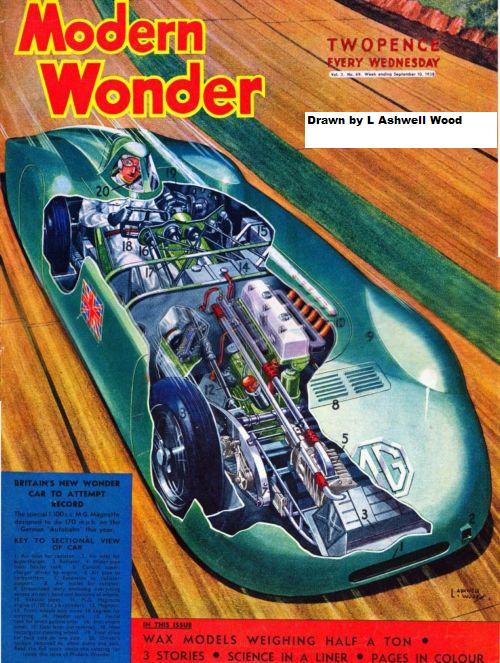 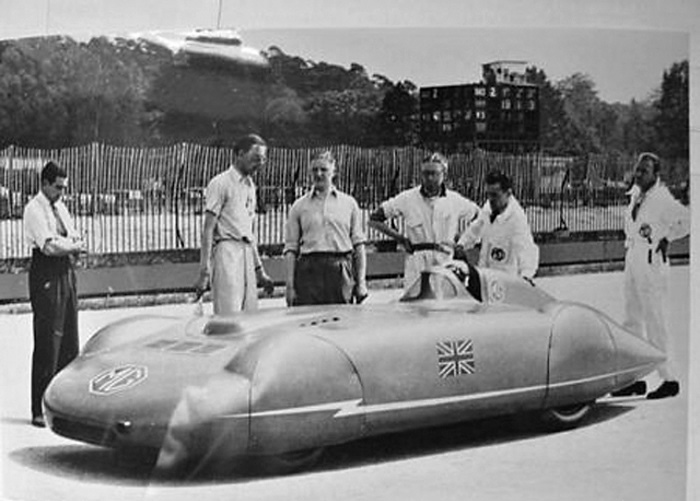 The engine is covered with water outlets, two in the core plugs and four on top in between each cylinder plus of course the water pump.But if it is an XF why does it have XK on the block? 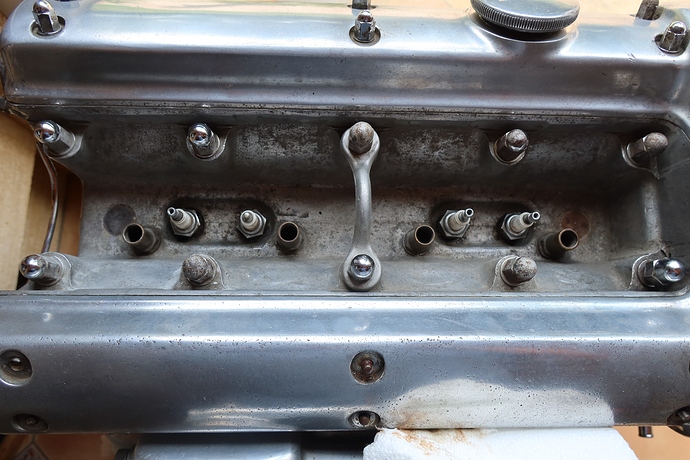 In general, XK prefix denotes experimental. I have a prototype engine for example where every component is labelled with XK followed by a series of numbers. When in production a C prefix was invariably used in place of XK.

The cam bearing covers are all marked XK 499 for example, and a chromed nut XK276. I suppose the only way is to try and measure the bore/stroke to see. 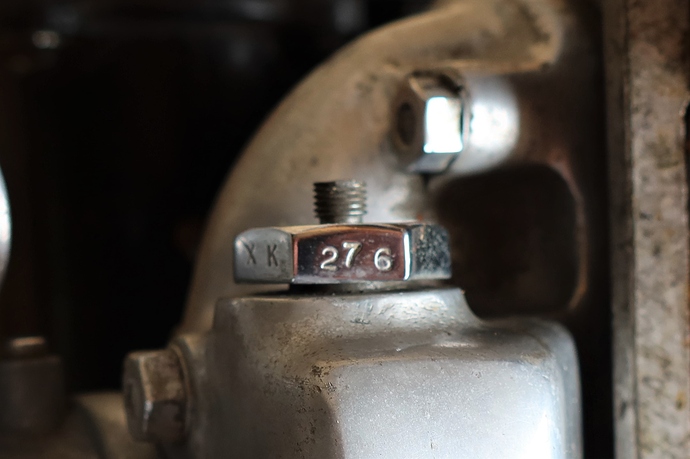 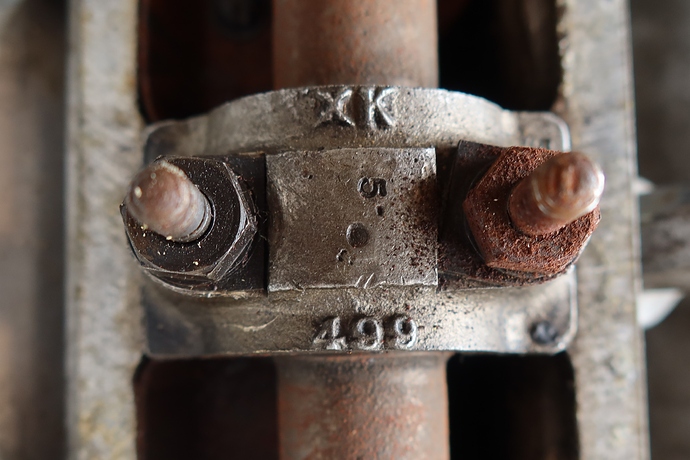 I’ve been reading up on the bore and stroke of the XF, XG and XK engines, and what we have decided to do is to mount the engine on a frame and turn it upside down, then remove the sump.Hopefully we will then be able to get enough access to measure the bore of the engine. The XG was 76x106 and the XK #1 76x98 and the final was 83x106. I don’t have to hand the bore and stroke of the XF engine though. But, if the bore is 83mm then by definition this must be an early XK test bed. It has no oil filter nor provision for fitting one, and the block does not have the flange at the bottom that the Gardner engine has. I am told that the bolt on the bottom of the block under cylinder #4 may well contain an oil pressure release valve. Frankly, I am in unchartered waters here. I knew, until a couple of weeks back, that these engines had existed but no more than that. You might like to read the two blown up excerpts from the brochure that was sent to distributors. Once again, things have changed. The bore and stroke are now 80.5x98. Confusing, isn’t it! 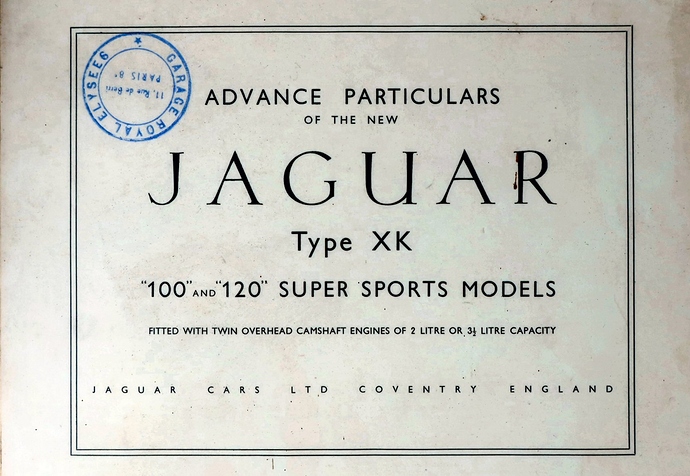 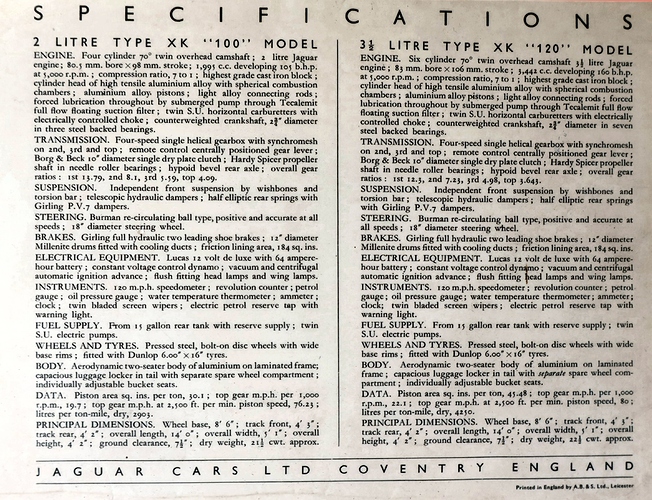 Presumably you have seen attached cross-section of XF engine… 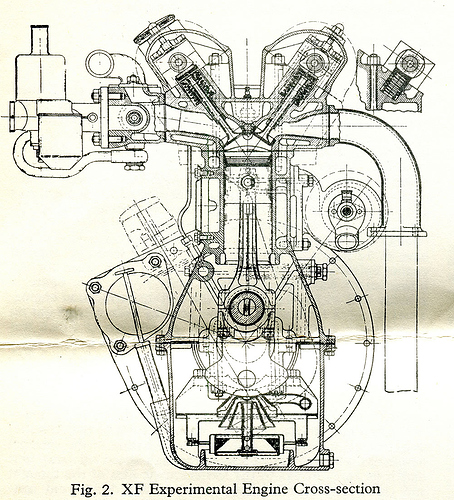 Thank you for that and I have a photo of an original XF engine, and what puzzles me is that the shape of the XF engine’s cam covers follow exactly the schematic. They are rounded. 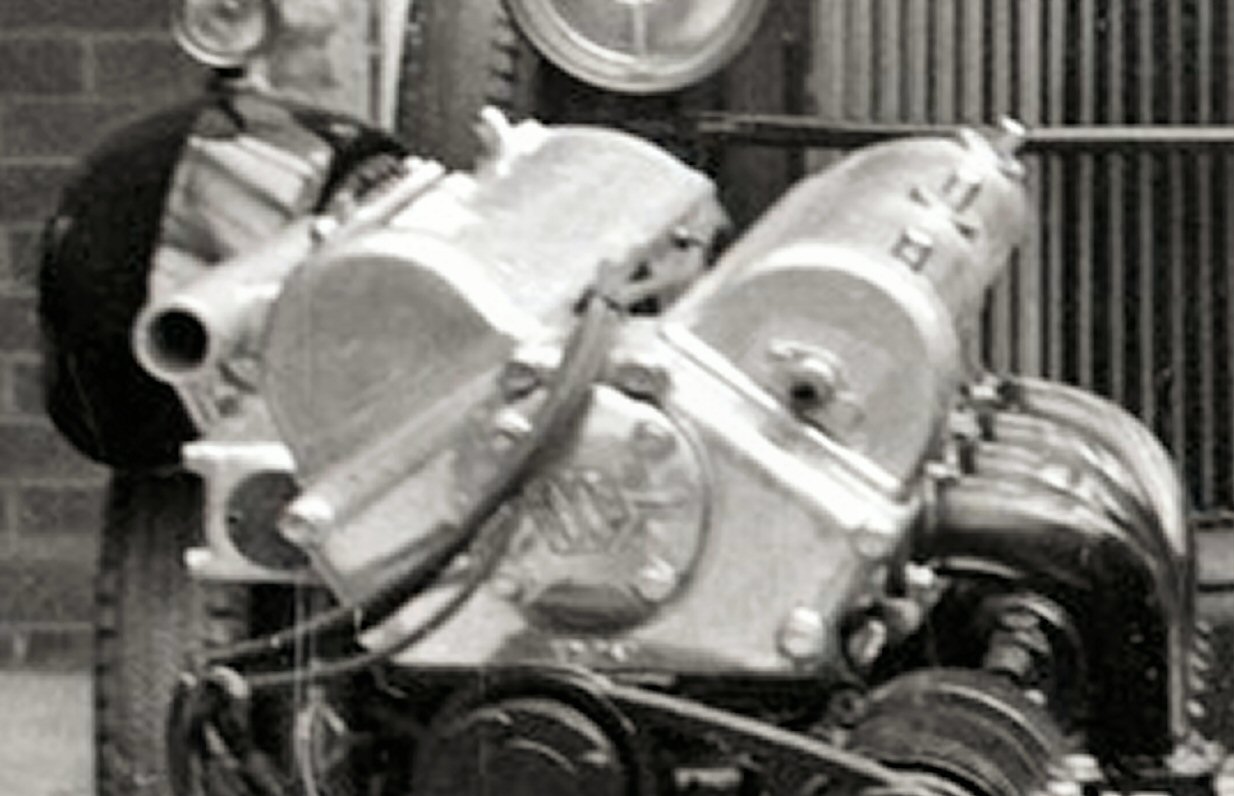 On first glance at my engine one thinks it is a normal XK but missing two cylinders. 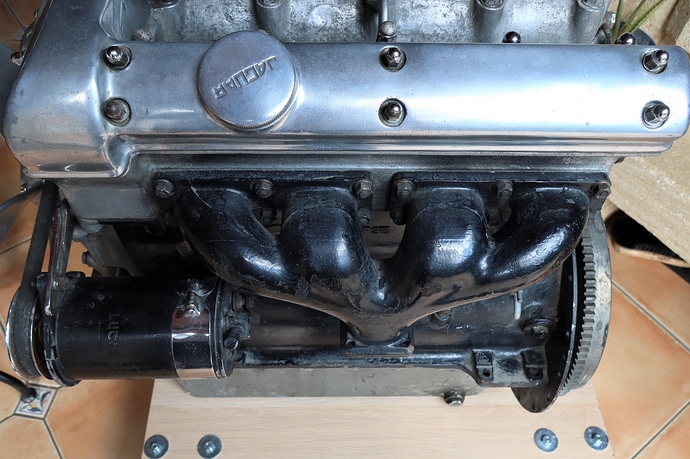 I am not the engineer here, just someone who has for years written articles on Jaguars, which is why I turn to you experts for advice. To me it looks more like an XK than an XF, but I have read that development was so fast that it is virtually impossible to find a time line through all the changes made.

In general, XK prefix denotes experimental. I have a prototype engine for example where every component is labelled with XK followed by a series of numbers. When in production a C prefix was invariably used in place of XK.

Neville, Tony
I always ‘thought’ the ‘X’ denoted experimental, and presumed ‘XK’ numbering was experimental/development for the XK engine, thus presumably XK-6 and XK-4.
And yes, once into ‘Production’ all parts then received a ‘C’-prefix part number.
The very earliest ‘production’ XK-6 heads had cast on them XK774 and C2242, and indeed the earliest XK-6 head I have confirmed with both these numbers had a HSN ‘Head Sequence Number’ of A23 - or the 23rd Head machined/assembled and was built into XK120 Engine No W1009-8 the 9th XK120-6 engine built. Presumably A1 to A22 went into the earlier engines, a few spoils/rejects, and maybe a few still used as test/trial heads, and I have always presumed possibly XK-4 and XF-4 heads as well, with the HSN allocated in order of Heads through the machine shop, regardless of being an XF-4, XK-4 or XK-6.

Now I do have one 4 cylinder engine with HSN A78 on what I thought was supposedly an XF-4 head. But I have nothing that says when this HSN started, so there may well have been experimental Heads made prior to the introduction of this numbering.

But if XK prefix denotes experimental numbering for XK engines (as I thought), then do we know of any numbering used on components of an XF-4 engine?

The XK-4 engine presumably dates ‘about’ the same as the XK-6 engine, and even though never put into XK100 car production despite being catalogued, was still being considered to be put into production as late as December 1952 (according to an internal memo), with ‘Modifications to the valve ports to bring into line with latest Mark VII practice’. This suggests to me several iterations of the XK-4 Head, as you would expect over its development phase, starting 1948 (?), an aborted XK100 effort in 1949, and imminent production again in Dec 1952, so presumably a number of changed XK prefix experimental/development part numbers with XK774 being the final XK-6 Head casting but now allocated part number C2242.

Richard Hassan asked me if my engine was fitted with a harmonic damper, which it isn’t, and which confirmed as far as he was concerned that this was an early block for the XK-4. Is the time line correct though? Well, yes. if we are to believe the JDHT who state that the first XK-4 ran in October 1945. For Richard says that a bunch of XK4 blocks were made in 1952 and that these engines all had the damper. He is coming to Le Mans in September for the race and has asked to visit, a request to which I will gladly accede. I too wonder why parts would have been stamped XK if they were, for example, being made for XF, XG or even XJ. Here is the photo of the engine block:- 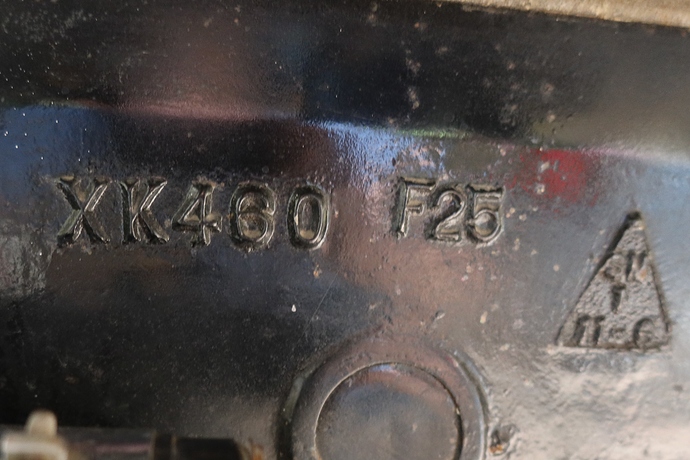 The two engines in the JDHT have no block numbers though. Another query while we are moving along. Here is the inlet manifold number. WM is the foundry I presume, and XK428 the manifold number. But the 901 is what? 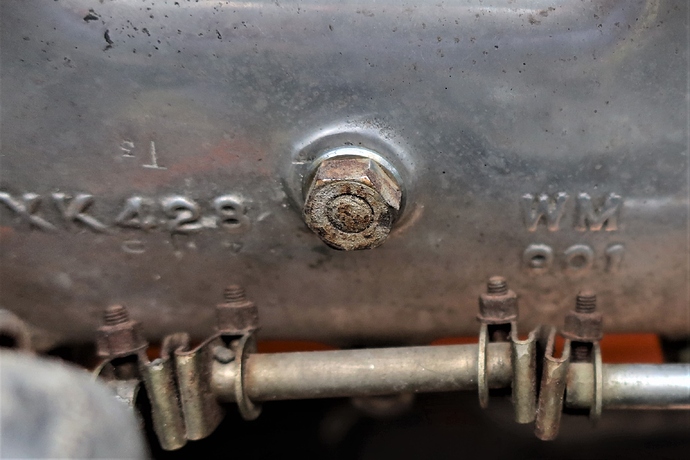 Another batch of photos has come in, but prints not email, so I’ll scan and post later. Makes for interesting clarification on a number of points.