My apologies if this has been discussed before but I did a search and nothing came up. Viewing other XK120 vids on You Tube keeps me motivated to work on my own when my energy flags. I thought this was interesting as it almost seems to mirror my own car – but an OTS – in that the color and overall patina seem to match. The sales guy speaks of originality but I’m seeing a number of low-profile mods back in the day. The most obvious being the passenger side top fender ventilation duct. That’s a new one. Anyway, it is something of a time capsule and I find these to be generally more interesting than restored cars as cars like these have a visual story to tell.

Disclaimer: I have no connection with these guys and I would imagine this car has long since been sold. 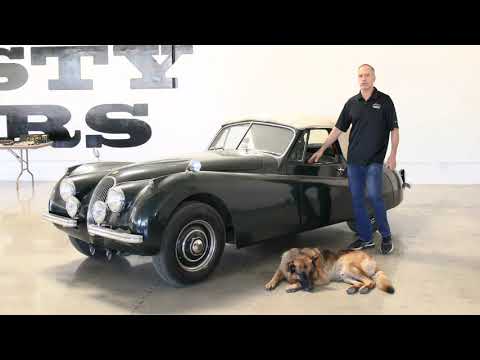 After a quick look at the video and aside from the strange vent atop the RF wing a couple of other things struck me about the car: the coil has been re-positioned from atop the front carb, the brake fluid reservoir appears to have been painted red, the horns seem to have been remounted as they show below the front bodywork and there is something circular and silver on the LF firewall that I can’t identify. I am sure a closer, more stop-frame viewing would probably reveal more anomalies, but that said, what a find! The car is certainly in far better shape than my old girl was when I purchased her back in 1963!

677432, W8867-8
$4415 plus $37 for a radio and 3% sales tax.
Interesting wrap-around rear bumper addition.
Front sidelight tell-tales faded but on the correct way.
Red hoses on the air intake.
Inside door latch handles horizontal.
Black tire pump handle.
Plain brown tool roll, no red inside.
The coil might not be Lucas?

Add to that the extra gauges on the dash left of the driver. It’s also interesting/ amusing the extra fuel pumps and labeled/ bagged spare parts along with the salesman’s comment that the former engineer owner was “fastidious” and didn’t throw anything out. I’ll admit to seeing a little of myself there. I’m sure you guys can too.

The “Arrowhead Foreign Car Club” makes sense after looking at the sales receipt. He lived at the time in Corona (San Bernardino County) with Arrowhead and Big Bear (skiing) being just up the hill from him. I wonder what became of the car club?

Maybe the red painted brake reservoir was to highlight the fact that it took DOT4 fluid and not 3?

A previous owner had relocated my horns too but instead of keeping them underneath, they were placed inside directly in front of the radiator (I’ve since rectified that).

rear bumper was US accessory,
love to see close up of top/hood fabric seems to light
note the air intake on top of RH fender

So presumably air filter front of radiator removed.
Notice a couple of extra gauges on drivers side
The red air intakes hoses I actually have one new old stock definitely black.

rear bumper was US accessory,
love to see close up of top/hood fabric seems to light
note the air intake on top of RH fender

Sorry, I didn’t mean to suggest that red intake hoses were correct, just interesting. Red rubber hoses used to be seen a lot around here.
The car is on xkdata so you can see it does have an air filter in front of the radiator and the full intake system.
He says the spare is original but its a Firestone so probably the same age as the others.
Looks like the guy collected parts at swap meets. I see an 8 blade fan with unpainted blades.
xkdata has pix underneath.