I know a lot has been already written on this subject but a fresh perspective is always good. Spent the winter rebuilding the brake system including re-sleeving master and wheel cylinders by Whtie Post. New brake lines installed and entire system flushed out. Also installed heat shield on MC which was not there before. Brake shoes and drum turning was done only several years ago so all ok there. Castrol LMA fluid used and brakes bled properly (frustrating experience!) so good hard pedal. Took it out for the maiden drive and all was well with lots of brake use, However upon returning to the garage it felt like brakes were dragging, jacked up each front wheel and cannot turn either front wheel at all - wheels are also hot. Rear wheels were fine.

Went to the forum and read what was pertinent. Came back out after maybe 1/2 hour when things had cooled down and wheels now turn easily!

Good news I guess as it is not anything in either wheel assembly. My guess is that perhaps the front piston on the tandem master cylinder (54 jag) is not returning properly when hot? Not sure what else this could be. Anxious to hear from the extraordinary wisdom of this collective group.

Couple of things: Do you have the correct clearance/free play at the brake pedal end? Condition of the tilt valve responsible for the front brakes?

Echoing Chris, the front system is not releasing the pressure when you let off the pedal. It releases slowly over that half hour. 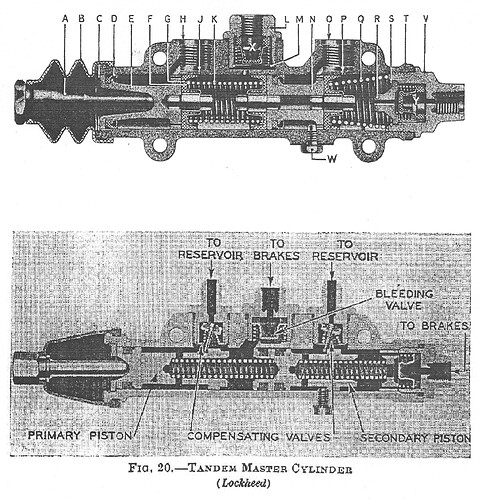 Did not change what was there on the free play before the rebuild but will check that and back it off tomorrow to see how that works - thanks for the feedback.

OK - gave it some more free play and took it for a short drive until it warmed up. All seems to be good now. Thanks for your input on this issue.
Tom

I’m back – took it for a longer drive to really let things warm up and the front breaks heated up and started to lock. Made it home and jacked up one front wheel (both were hot) but could not turn the wheel. loosened the bleeder and then could turn easily. I have lots of free play in the pushrod having just adjusted it so I am thinking that the front plunger (tandem system) is not returning or the pivot valve is not working? Guess I will have to remove the master cylinder (again) and have White Post take a look at it?

You aren’t the first to have trouble with this tandem master cylinder.
First look for damage in the tilt valves, aka compensating valves. They are supposed to be tilted (i.e. opened) when the primary and secondary pistons move back.
Secondly, look for damage or failure to release in the bleeding valves, one at the top center and one in the front end, also labeled X and Y in the other view. There should be a rubber cup in there, the idea being to make it easier for one man to bleed the system.

Thanks Rob but before I remove the MC for the third time I wanted to discuss further. This morning when all was cool I checked both front wheels and was able to easily turn them although there was some slight drag on the shoes from out of round condition I suspect. I then applied pressure several times to the brakes and could still easily turn the wheels so no lock up. This may indicate that the MC is OK? In any case lock up only occurs after driving for a while and things heat up - could it be that the slight drag on the front shoes is causing the heat expansion and lockup? Also I drove the car for 45+ years with no heat shield and finally installed one after the MC rebuild last month - don’t think that is the problem as it should have helped!

Thinking more about it the fact that if I relieve the pressure from the bleeder when hot and that frees up the front brake - leads me to believe it may be MC and heat related?

OK did another test. Warmed up the car for 1/2 hour to 80 C but did not drive it. Shut it down and used the brakes going both for and aft in the driveway. Front wheels not hot obviously – Jacked up each and both turned but with some drag. Bled one side and then it turned freely! Not sure what to make of this?

Hate to say it, but the only time this issue has occurred in my 59 odd years of living with a tandem m/c XK120 it has been either insufficient clearance on the main push rod or the tilt valves. The first occasion, which occurred shortly after I got the car, it turned out to be that the tip of one of the tilt valves had broken off. Did you follow the workshop manual carefully when rebuilding the unit or was it done elsewhere? In some instances mechanics not familiar with the cylinders do not follow the proper procedures and assemble incorrectly. I seem to recall an instance on this Forum several years ago where a car that had undergone an extensive restoration experienced a similar issue and it appeared that incorrect assembly had caused the problem. I recognize it is not an easy job to remove the cylinder, but…I experience the slight, occasional drag when rotating a front wheel and, even though I had the drums turned back in 1964, put it down to out-of-round, however, it has never developed into full lock up on the car. I also once had the same problem with a Mk IX and it turned out to be a build up of crud in the push rod boot preventing a full return, thus eventual lock up.

Thanks Chris - the rebuild was done by White Post Restorations but might still be that the MC is the issue.
Following is their response to my email yesterday: “These are notorious for sticking due to heat; we compensate for this by increasing the bore diameter slightly. You should be able to test on bench to see if problem is due to piston sticking. If you find that is the issue, or you want us to check it over just send it in with a note of explanation.”

Tommye, my experience is these tandem M/Cs are extremely finicky and that’s likely why Jaguar gave up on them and went back to the single system on the XK140s. That said, I think the front wheel lock up has three likely causes, and the first two you have already addressed.

Fortunately, White Post provides a lifetime guarantee on their work and this includes the tilt valves which they typically require customers to purchase new from them as part of their rebuild service.

In my case, the White Post rebuild did not work properly the first time. It’s a big chore removing and reinstalling the tandem M/C, but White Post was good to deal with. The second time back from White Post the brakes worked fine and have continued to work fine for the past 15 years.

Thanks Mike and yes I have ruled out the first two. This will be the second time I send the unit back as the first time it was leaking from the pushrod end! They did not replace the tilt valves but I am asking them to do that this time as that appears to be the culprit or the bleeding valves as Rob describes above. After all my testing the fact that the brakes release if I open the bleeder does point to the MC as the problem. The heat effect only worsens the problem it appears.

Thought I would follow-up to close out this saga. Returned the MC to White Post and they concluded that the front cylinder was in fact getting hung up so they honed it out further and also replaced both tilt valves free of charge in case that contributed to the problem. Although frustrating to go through this process, Billy at White Post was very agreeable with follow-up and making good on their work. MC is on its way back and I am hoping that no further discussion from me on this thread will be needed!

That’s good to hear. I have had wheel cylinders sleeved at the same company as mine were beyond honing and have been pleased with the results.

Well I hate to open this discussion again but still have problems. Following is the last communication with White Post upon returning the MC for rework:
“The techs found the piston was still sticking at times in the bore; they honed the bore further in order to give you more clearance. They reassembled and provide new tilt valves just in case those were an issue too. They tested it and it seemed to be working fine.”

So all is back together now and i bled the brakes (about 8 times over several days). Quite sure all the air is out of the system. When I push the brake pedal it goes all the way to the floor and I see a slight rise in the fluid reservoir. I then pump the brakes quickly and can get a pretty good pedal and hold it with no pressure releasing. I also see the fluid level go down when I do this pumping action and when I then release the brake pedal the fluid level comes back up. Anyone have any thoughts on this? I have also emailed White Post to see what they have to say.

White Post says take it to a Jag mechanic! -That sounds like you guys! I can only conclude that there is air trapped somewhere in the system. It does appear to me that the MC is working properly and I can engage the brakes and brake lights when I push on the pedal. Just can’t get the pedal to stay up except when pumping which I assume compresses the air and inserts more fluid in the system.

Is this a LHD car? Do you have the heat shield installed between the master cylinder and the exhaust?

I’m starting to think there is a blockage somewhere in the front lines.
Did you replace all the rubber hoses? Steel tubing? Maybe there’s something in the brass tees? 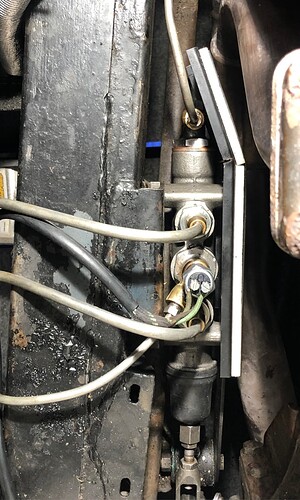 Not heat related because the car is cold and stationary. No blockage because I can push lots of fluid through each bleeder valve. New rubber coated braided hoses. Steel tubing was all removed, cleaned, blown out and pressure tested.