As found, yuck. Take notes on the correct angular movement before you disassemble it. 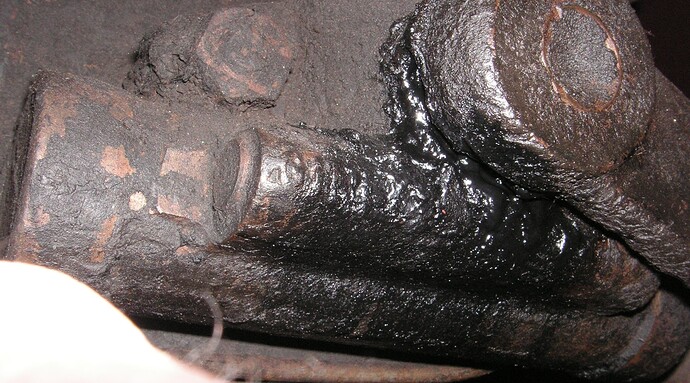 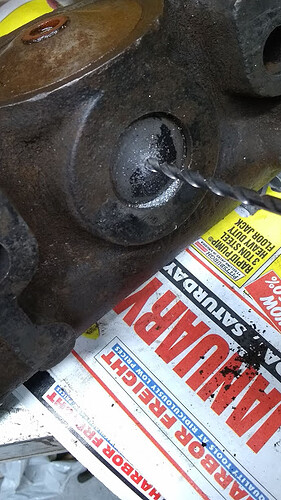 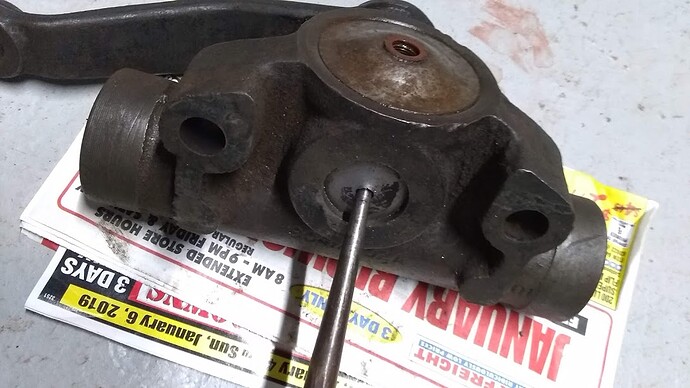 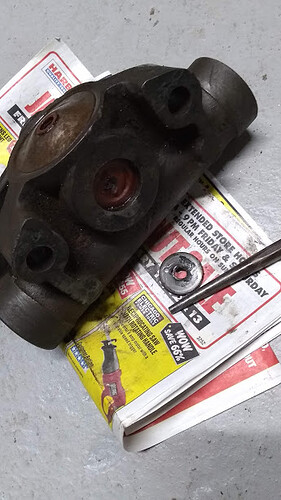 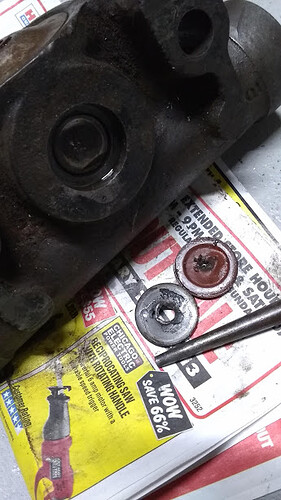 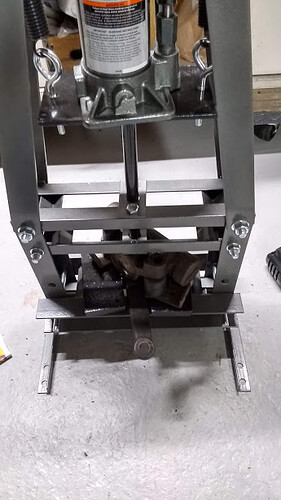 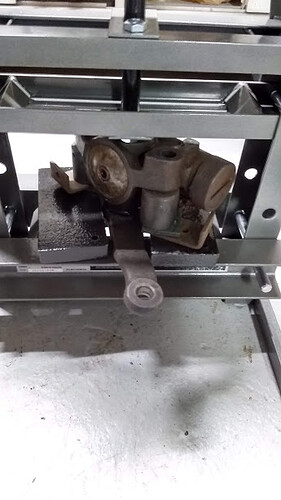 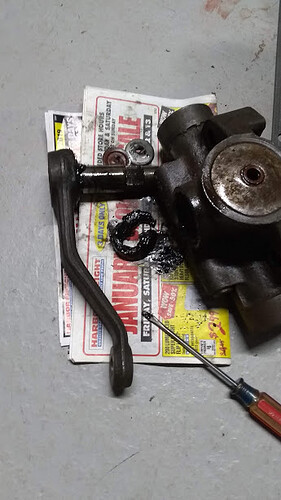 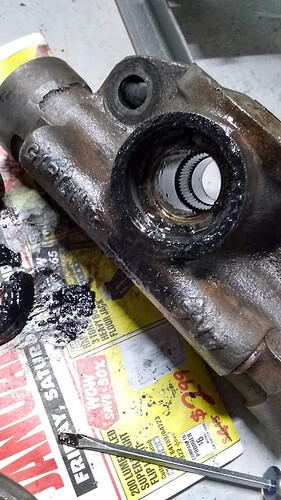 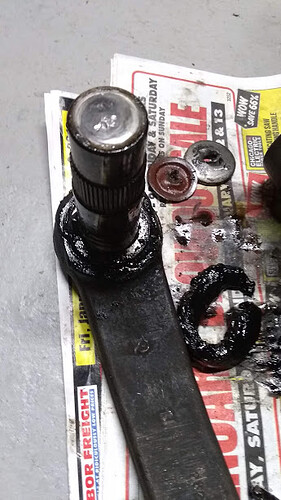 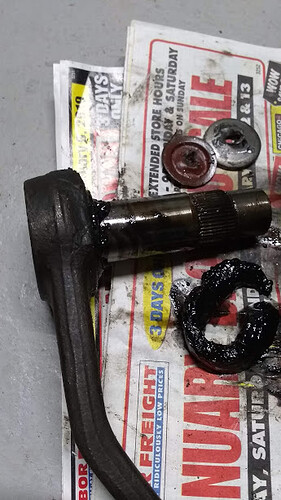 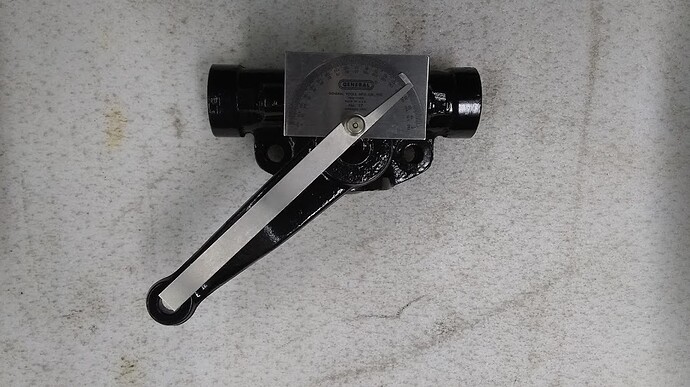 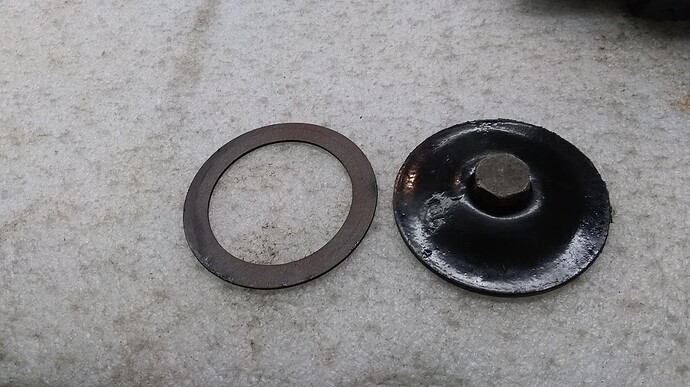 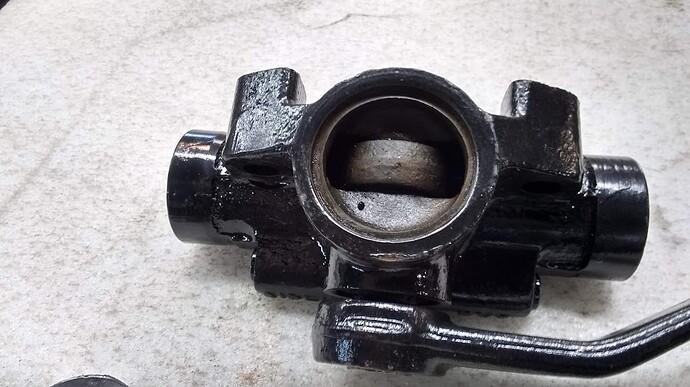 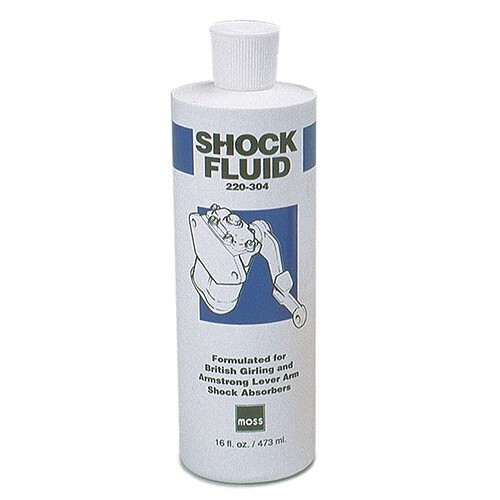 Thanks Rob, very nice write up.

My rear shocks were originally black as can be seen in my second and third pictures above.
Grey is correct for Lockheed single master cylinders and Newton front shocks.

We agree on black for the Girling rear shock dampers, but what I see in various documents is that the later (post April 1952) Newton front shock dampers are either black or a very, very dark grey.
See also the photos presented by Urs Schmid (Vol 1. pg 118) and by Graces Guide (pic below).
Also most Jaguar’s factory XK 120 documents show a black damper (although B&W photos of course).

The earlier Newton front damper may have been grey, although not a particular bright grey (but then there are of course “Fifty shades of grey”)… 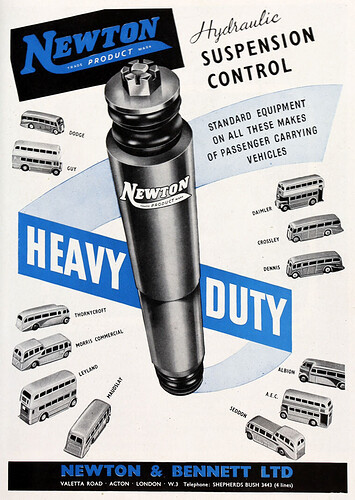 Probably one of those questions for which there are several answers.
April '50 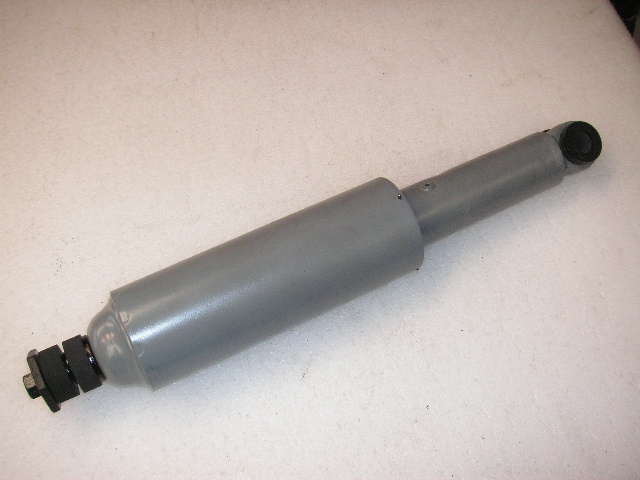 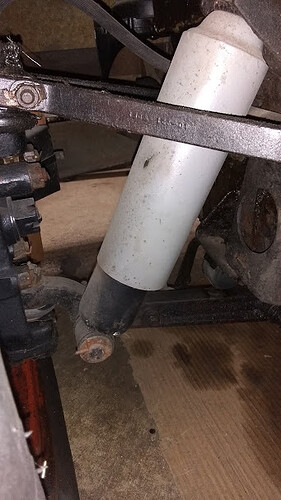 Your second photo shows a kind of “compromise”: top part grey, lower part black. But in any case these are both the earlier Newton version, not the 1952 version.

what I see in various documents is that the later (post April 1952) Newton front shock dampers are either black or a very, very dark grey.
See also the photos presented by Urs Schmid (Vol 1. pg 118) and by Graces Guide (pic below).
Also most Jaguar’s factory XK 120 documents show a black damper (although B&W photos of course).

Bob, it’s pretty rare to find a pair of Newton front shocks with intact original paint, but occasionally they turn up. Urs Schmid’s photos in Vol. 1 are not good enough to arrive at a reliable paint match. The Newton advertisement you’ve provided is for commercial vehicles and shows an incorrect upper castle nut. I don’t think it’s reliable for a paint match.

Years ago a friend gave me an excellent pair of second generation Newton shocks from his March 1953 FHC, but unfortunately a restorer had repainted them the blue color found on later XKs with Girling telescopic shock absorbers. About the same time I was looking for a paint match, both Tadek and Paul Gavaza from this forum informed me their low mileage 1953 and 1954 XK120s still retained their Newton shocks with the original medium gray paint. Using Tadek’s photos, I selected a medium gray paint which is close to the gray color Rob Reilly shows on his first generation Newton shock from April 1950. The link below is to the old Jag-Lovers forum, and contains my Newton restoration photos.

Since that time, two other XK120s have turned up on Bring-a-Trailer with original Newton shocks. S674662 was a basket case, but BAT provided numerous close-up photos of the removed original parts. 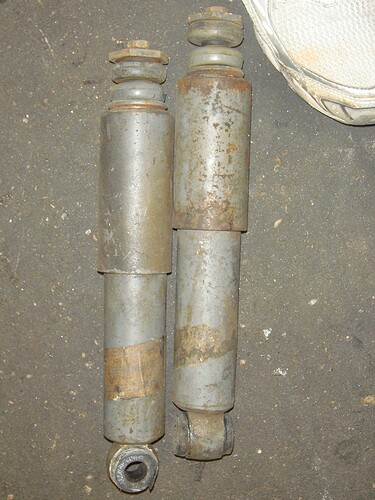 Of interest to me, my pair of Newton shocks have Girling-branded lower shock bushings. (See final photo in link above.) Similarly, the Newtons from S674662 also have the Girling shock bushings. Thus, it appears that Newton had some type of purchasing arrangement with Girling. 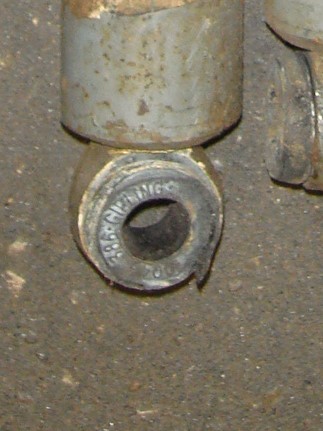 The second car from BAT is S673375. Although the shade of gray is not easily discernable. I think you’ll agree it’s not black. 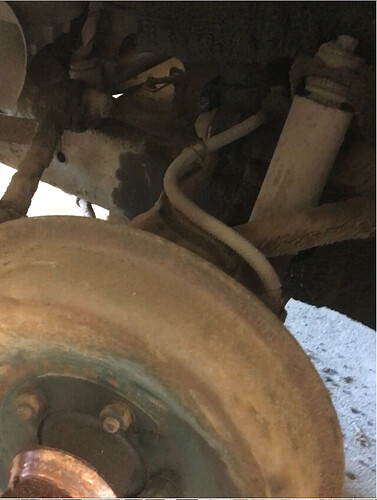 Finally, if anyone needs to mechanically restore an XK120 second generation Newton, I can provide the o-ring numbers from McMaster Carr.

Thanks for this information which is really convincing! Still searching for more information on these old Newton shock dampers and also whether perhaps Newton & Bennett had been taken over by Girling somewhere in the mid Fifties as the XK 140 had Girling branded shockers (and that could also have explained the Girling bushings you found).
Although we’re now dealing with the front (instead of the rear dampers of this thread), for those interested I found some information about Newton in a Motor Sport article of September 1952 (listing all British shock damper manufacturers). It reads:

It should be explained that each Newton damper is stamped with a code reference which tells the user its complete characteristics as well as its type. Thus 14,365 VE12C.2 is a 14,000-type damper with type 300 end fittings and a stroke of 6.5 in. U indicates normal constant leak (from the Code N = no constant leak, U = normal constant leak, W = double constant leak. E indicates that extension setting No. 12 and C that compression or closing setting No. 5, are in use. S after the extension or closing setting code No. indicates that a special stop is fitted in the indicated direction of travel.
14,000 series dampers range from 3½ to 9½ in. stroke and 6 to 13.73 cubic in. fluid capacities. When it is remarked that the extension and compression settings available range from 10-30 lb. at 15 in. per sec. (Code No. 0) to 2,300-2,500 lb. at 15 in. per sec. (Code No. 21), the builder of a “special” car will appreciate that there is a Newton Suspension Unit for every need. The price of the type 14,000 is £6 per pair.

I found that the early type Newton shock absorber (Jaguar C.3035) had Newton part number 12553E. This apparently is a “12000 series” damper with “type 500” end fittings and a 5.3“ stroke. Other sources indicate that the XK 120 shocker has a fully extended length of 16.25 and a fully compressed length of 11 inch. The resulting stroke of 5.25 inch is identical to the mentioned 5.3 inch (rounded).
E indicates that extension setting No. 12 is in use, which probably is the required pressure to obtain a certain damper speed, apparently always measured at a standardized speed of 15 inch per second (or 38 cm/s).
Newton indicated that code No. 0 stands for 10-30 lb. at 15” per second and No. 21 for 2300 to 2500 lb at 15” per second. Interpolation would mean that No 12 would be somewhere half way that range at about 1200 lb at 15 inch per second.
The later type Newton Shocker (Jaguar C.7183) had Newton part number SK1743 U. This code is different from the earlier ones provided by Motor Sport and therefore the code reference is unclear. The letter U may stand for a “normal constant leak” construction. The 1952 Motor Sport article refers however also to a SK1662 damper used on the Le Mans Replica Frazer-Nash meaning the SK damper type was already available in 1952 (next to the xx000 types).
See the 1952 Newton advertisement below, also used by Urs Schmid, showing the later XK 120 shock damper.
Bob K. 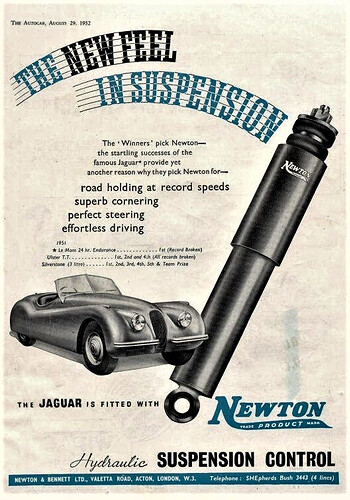 Hi Rob, Bob, and Mike,
I rebuilt two pairs of later model Newton shocks about 4 or so years ago, one pair for my 52 120 FHC and one pair for my brother’s late (10th from the last) 54 DHC. Paul Gavaza helped me in this effort, having successfully rebuilt his. I also used Mike Balch’s pictures to help in the reassembly. Rebuilding entails disassembly and thoroughly cleaning each part (especially the bottom of the tube) and replacing the various rubber O-rings inside. Lastly I filled them with shock fluid (from Moss Motors) with the proper amount specified in the Jag shop manual. They work very well and have not leaked a bit in 2200 miles so far. I painted them with medium gray enamel.

Regarding color, I have two later style pairs on hand to examine. One is my original set, removed from my August 52 FHC, and the other is a set I purchased from a CA restoration shop. Both pairs are primarily medium gray but with spotty black paint over the gray. I first thought the black was just grease and oil accumulated from running, but after cleaning with a rag and paint thinner it appears like a spotty thin layer of black paint. I will take some pix and attach later today.

This, of course, proves nothing as far as how they were originally supplied on the car, but perhaps they were painted (by Jaguar) as part of the front end assembly with the same thin crappy paint that was used on the undercarriage. The black paint extends the entire length of the tube which suggests they were painted fully extended. And both pair have the 1’" square brush stroke of white paint randomly applied to the bottom edge of the upper cover, signifying something.

Attached are pictures of the Newton front shocks. 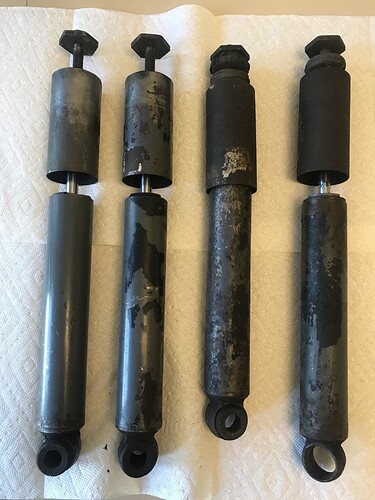 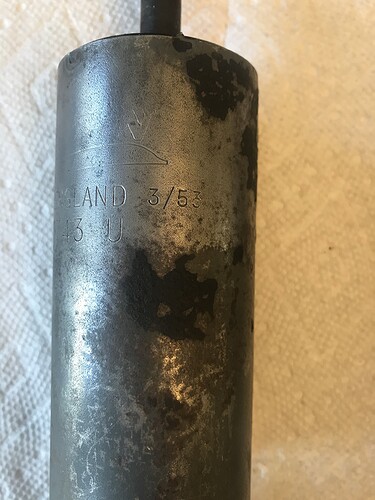 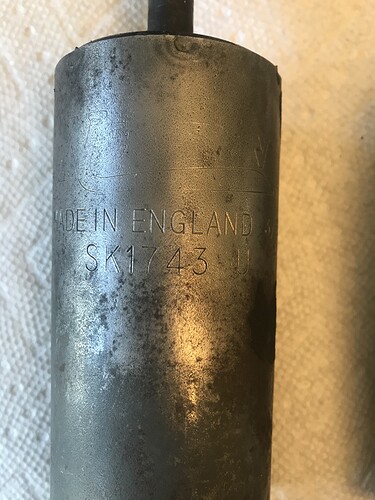 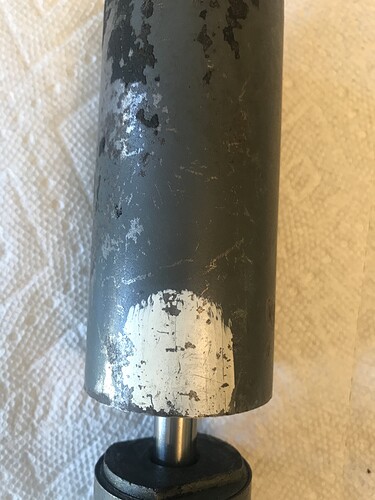 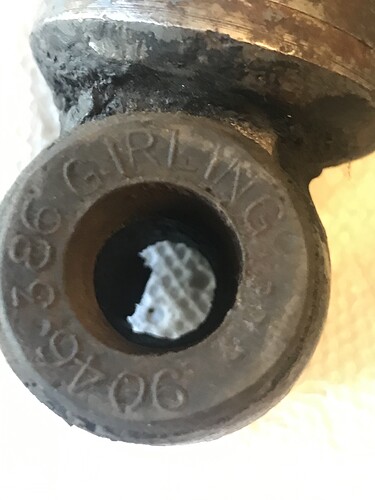 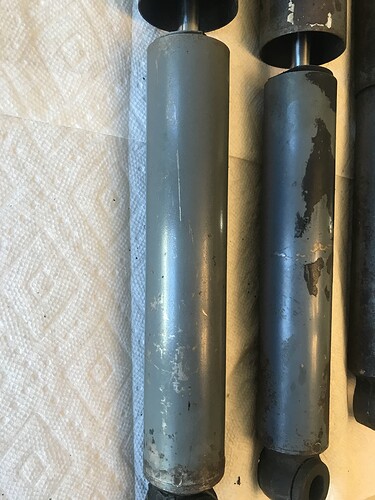 Man, would I like to have one or two of those buses they showing that in that ad!

Paul, you’re living in the wrong country and should move to England. There must be many of those buses still left there. Or try one of the former “Commonwealth” countries: British buses were also used in those countries. As an example, look at this site: https://www.classicbuses.co.uk/
But this is way out of the scope of this Forum item (but I’m guilty myself by starting addressing Front dampers).
Bob K.

Bob, please do not forget about the white paint smear!! 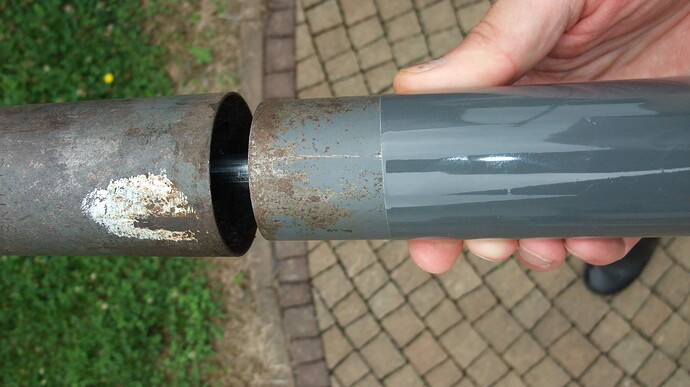 If you need more photos, pm me.

BTW, I am looking for one front original shock absorber…

Thanks for that very important bit of information, Tadek; I had almost forgotten the white paint.
Again, you have a lot of additional information there on these shock dampers including that magnificent “exploded view”!

In all honesty: the level of collective knowledge and experience on this Forum is so impressive that together we are able to provide a wealth of additional and detailed information on any part of our beloved XK’s, using the SPC’s or even the “XK Explored structure” as a framework to store and retrieve such information. I see that various (all?) Jaguar part suppliers are also struggling to get that kind of information on line.
In this digital world we’re living in, such a digital library should be feasible whereby every XK Lover should (be able to) upload and store his/her additional information per Jaguar part number.
Am I dreaming or would this be really feasible?
But (feet on the ground) I guess all we (= every Forum member) need is more time….**

Hi Tadek. Did your Newton shock have the Girling-branded lower rubber bushes? Also, was it you who said the early Austin Healeys had the smear of white paint on the front shocks?

No yellow paint on mine!.. This means that my car has the wrong toe alignment…

Somehow I remember the white smear could signify the oil grade, but I am not sure.

Mike,
I am afraid the bushes are gone…
Re Healey - possible - I cannot remember. the Healeys had Armstrong shocks though.