Hello, could somebody tell me how the factory fitted fog lamps in a XK120 FHC are wired? I can’t find any XK120 wiring diagram showing this. Is it possible to turn them on regardless whether the sidelamps or headlamps are also switched on? So, where is the switch for the fog lamps connected to? To a switched terminal of the lighting switch, either sidelamps or headlights? Are the fog lamps unfused?
Regards Joerg

This is a long story with some open ends but in short it goes as follows.
There were not many XK 120s that left the factory (or Jaguar’s Competitions Department) with Fog lamps. Most used the XK 120 Lucas kit installed by the dealers or owners.
We believe that Jaguar used special mounting brackets for the fog lamps whereas Lucas used standard (though adjustable) brackets for the XK 120.
In both cases the Fog lamps are wired without a Relay. As the XK 120 doesn’t have the 4 position light switch (including “Fog” position as per XK 140 SE), a PS7 (on/off) switch is connected to the Red cable of the PRS.7 light switch (Lucas 31426/A) and from here to the Fog lamps using a Red Yellow cable.

In your case, the PS7 switch would have been mounted in the wooden panel at the LH side behind the steering wheel (for LHD cars). Referring to the different solutions of Jaguar and Lucas, the switch is in the case of Jaguar is Switch C.2744 or Lucas 031216 which is Lucas switch 31228 with a special chromed knob (see photo). 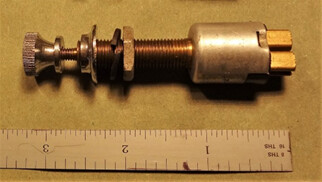 The Lucas set had a different switch (Lucas 031216) which has a shorter stem and black knob which might be difficult to mount in your (thicker) wooden FHC dasboard. See photo. 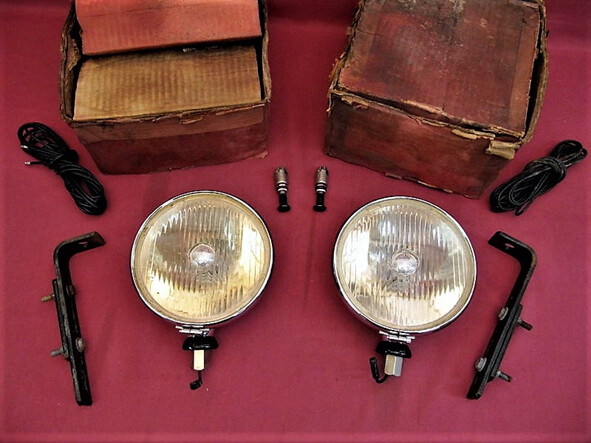 Finally, the XK 120 with registration LWK 707 (the “seven days, seven nights” Montlhéry XK 120 FHC record car) had 2 of these “Jaguar” switches on an extra (metal) switch panel on the (wooden) facia panel to the right of the steering wheel (RHD car!!), the fog lamp switch is one of these two. You could copy this, using only 1 switch and without the metal panel. 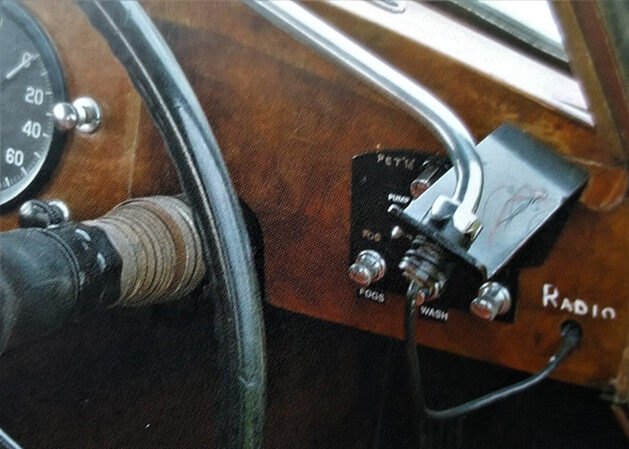 When we were compiling the JCNA XK120 judging guide, we found there was no official record of exactly how the fog lights were wired on XK120, where the switch was located, or even exactly which mounting brackets were used at which times.

There were opinions, some reasoned and practical, and some…less so, one could even say leaning toward arrogant and overbearing.

It’s one of the idiosyncrasies of the XK120, that no two were alike, and there just isn’t the documentation equivalence of the Corvette.

There is this in the SPC.

So what to do?

Or one could follow the example of Mark VII and XK140 which had a main lighting switch with a fog light position built in. There is no fuse between the fog lights and the switch, but the current may go through one of the fuses before getting to the switch, I don’t know.

But my solution is to connect them through the sidelight fuse with a hidden switch under the dash, so they can work with sidelights only, or with headlights and sidelights together.

I am sure there will be a complete thread just on this with photos of mountings, holes through body etc etc 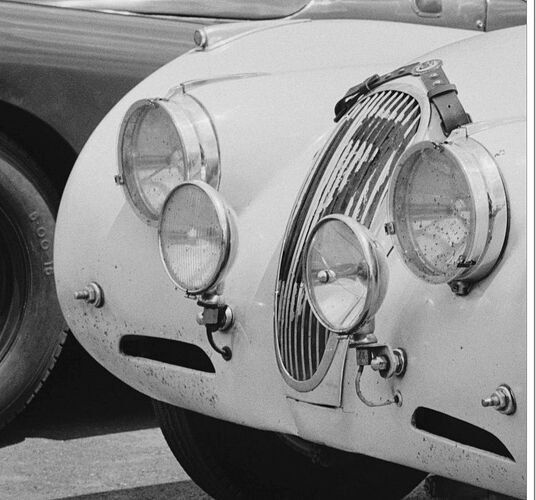 LeMans 1950 car.
This shows the grommet position, at least…

Wasn’t the switch mounted on the dash? Isn’t there a space for it?

Many thanks to all of you for your very comprehensive and informative replies. The car I am restoring was not equipped with fog lamps originally. But as I like their appearance I bought two Lucas SFT.700 and mounted them with brackets I made according to the picture in Tadek’s post.

Bob and Rob, you both agree, that the fog lamps could only be switched on when the side lamps are turned on. So I will do the wiring exactly as described in Rob’s solution. I will connect the switch for the fog lamps to the red/green wire of the SF.4 fuse box. This way the fog lamps are fused together with the side lamps.
I will certainly not drill a hole in the freshly restored dashboard but will mount the switch thereunder. And I am not sure whether I should drill extra holes for the wires in the freshly painted fenders or instead route them through the brake ventilation openings which are about 1 inch next to it. At the moment I’d tend to the latter.
Regards Joerg

I wrote a complete story on the subject which was published in the XK Gazette (Porter Press) in 2019. With the help of “more knowledgeable” people we arrived at your conclusion that “there was no official record of exactly how the fog lights were wired on XK120”.
But by carefully studying the photos of all 1949/1950 race cars that participated in the various events in that period, we were able to reconstruct both the Jaguar mounting brackets and the (most likely) place of the switch.
Tadek provides one of the many pictures we found regarding the Fog Lamp Bracket that Jaguar (or better the Jaguar Competition Department) used.
We became also convinced that switch C.2744 was placed on the dashboard behind the steering wheel. See photo of JWK 977 as an example… 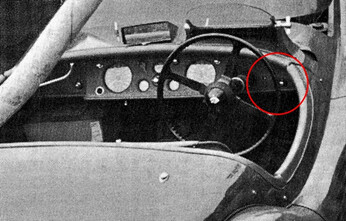 In my earlier reply I described the switch that the SPC refers to (C.2744), a switch that has been used by Jaguar in more cases up to the 1960s for e.g. (optional) heated rear window on some of the E types.

The Lucas Fog Lamps Set is quite different and has nothing to do with the original Jaguar solution.

Don’t know what the final verdict was in the JCNA XK120 judging guide, but it is my believe that we came close to what Jaguar actually used for these SFT.700 lamps.

The electrical leads for my spotlights route through the brake vents, I never could fathom why, when the vents are so close, they drilled holes through the wing and added a grommet? Mine are also wired separately as I only have the 2 position dash switch. Many years ago, after I no longer felt the need to listen to music while I drove, I removed the radio and fitted a panel trimmed with Rexine to match the doors/dash top in its place carrying toggle switches for the electric choke, spots and one that I was going to wire up for the fuel pump, but never got around to doing!

I’m another that didn’t like the idea of drilling holes and ran my wires through the brake vents.
I made brackets out of 3/16" x 1-3/4" steel flat stock after our discussion which I think are pretty close to correct. 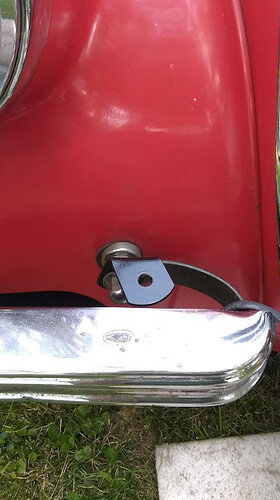 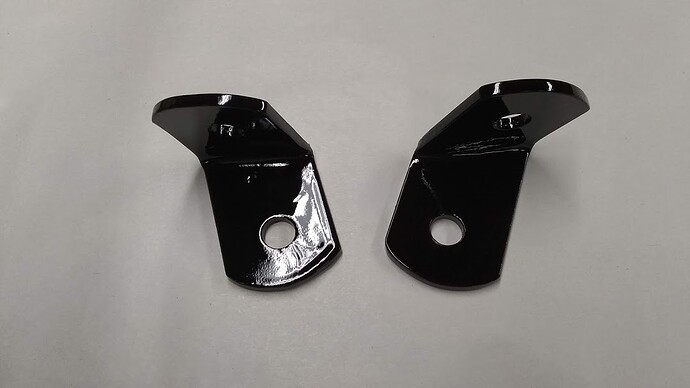 As to the grommets in the factory race car, I suspect the thinking of Lofty and the other engineers was that preventing the wires from flopping around at 120 mph was more important to them than any aversion to putting holes in what was at that time a brand new car.

Beautifully made. How did you bend them? I need to make similar for the Square 8’s that were optionally fitted to S1 XJs in lieu of the fake horn grilles.

First make one out of cardboard to check you have the right bend angle.
Mark the steel with a scratch awl at the angle, allowing for bend radius.
Put it in the bench vise.
Oxy/acetylene torch heat it orange hot at the bend region.
Bend with a hammer.

Add a fuse. Mine shorted out after a small bump shorted the leads in the bulb. This caused a small fire at the switch which then melted.

We totally agree Rob, but I went for 2" wide material as the diameter of the lamp foot is rather large. This is what my bracket looks like: 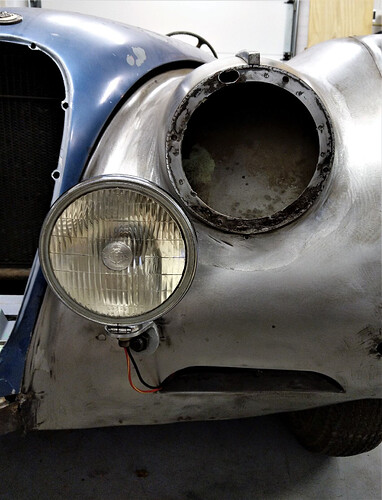 The position of the SFT 700 on the XK 120 is a “compromise” between opening the bonnet (yes I know,) and not blocking the light from the head lamps.
The drawings look like this. The LH and RH versions are mirror image. This is the best we could come up with, but might still be incorrect. 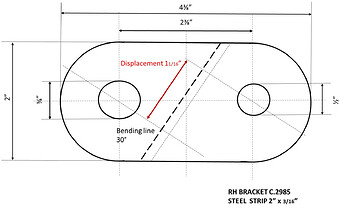 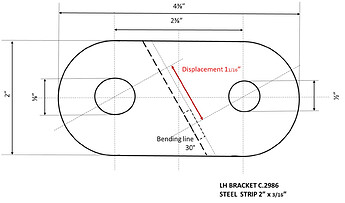 OK, here’s my thoughts on the XK120 fog lamp brackets. Rob and Bob appear to have closely copied the brackets the Factory fabricated for a handful of early competition cars.

Fog lamps were a potential dealer option, but I suspect there were very few fog lamps actually installed by dealers when the XK120s were brand new. If there were, we would have a much better understanding what the brackets looked like.

Years ago Bill Bassett told me he had seen a few XK120s with what he thought were early dealer brackets. So he copied the design and offered them for sale. The “Bassett” brackets mount to the inside bumper irons and are totally hidden except for the small top surface which has a convex shape around the fog lamp mounting hole to accept the concave shape of the underside of the Lucas chromed mounting donut. It’s a very elegant and well thought out design. Bassett no longer offers this design for sale, but Rogers Motors does. I don’t know if Rogers Motors simply copied the Bassett brackets or came up with the design independently. 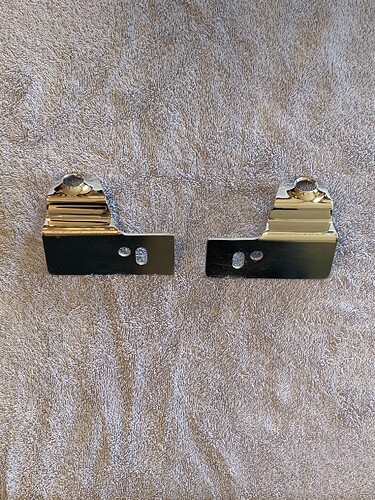 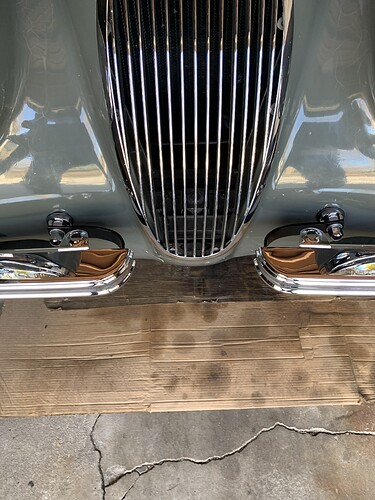 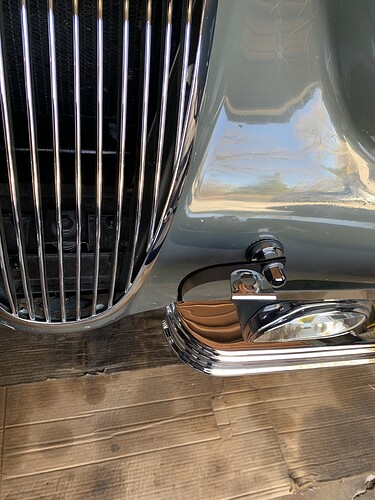 During my research on the subject I found many of these (and other) brackets, but there’s sincere doubt whether these were made by Jaguar. See photos. 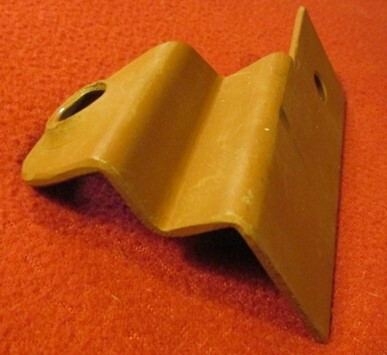 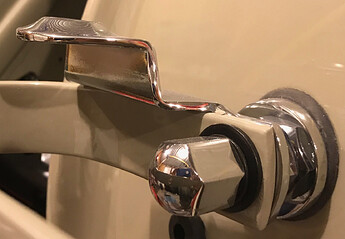 As (most likely) no production XK 120s ever left the factory with Fog Lamps, I guess the most "honest’ solution is in fact to use the Lucas brackets as they have been well described by Lucas and could be ordered by every dealer around the world. 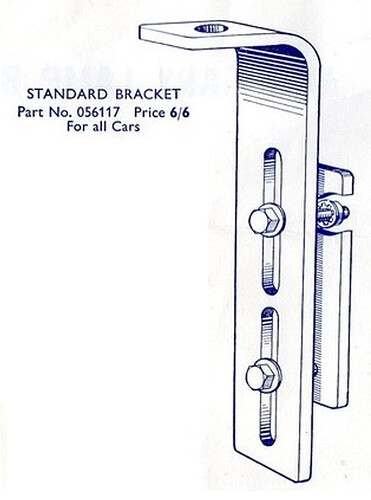 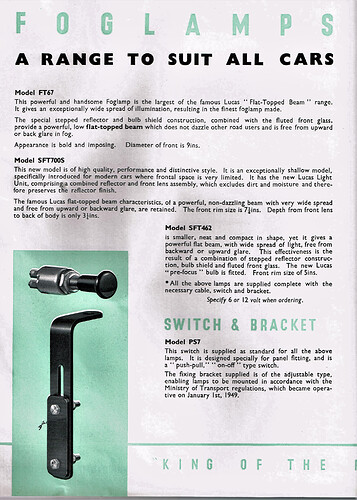 Bob, I agree with your thoughts 100 percent. I didn’t mean to imply the brackets on my car are a copy of a Jaguar design or part number. Just that it’s an older design custom made to fit the XK120 and Lucas Fog Lamp base.

A friend owns an XK120 with fog lamps date stamped from 1955. The fog lamp brackets are another special design that are very attractive. I’ll take some photos of them so you can add them to your research.

Here is a dashboard photo of Jan 1952 679265 as found. The lamp brackets are exactly as per Rob Reilly’s photo above and the wires lead through their own holes in the front wings. 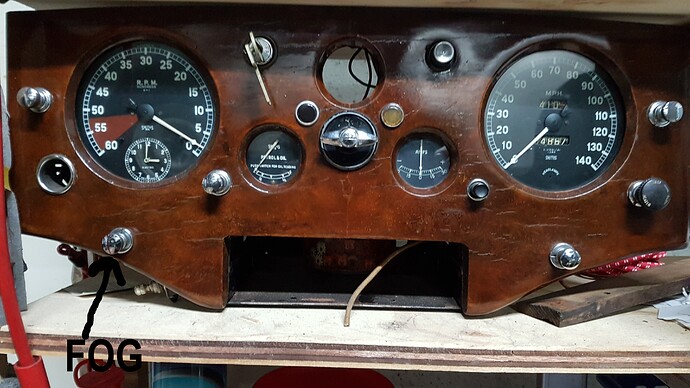 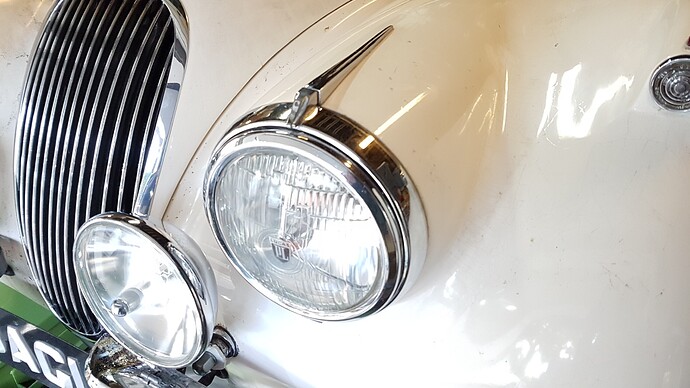 Growler, we would love to see more pictures of your fog light brackets.
Your dashboard is interesting to me for three other reasons.

Are “Optional Extras” (like these Fog lamps Jaguar C.2988) normally mentioned in the Heritage document? They should have been noted in the factory records or not?
Would be very interesting to see how Jaguar referred to these Fog Lamps…