I am interested to know of any recommendations of sources in the UK for XK120 single pipe system silencers in stainless. I would want one made to the original pattern. The one on the car seems to have the front mounting tab in the wrong place (too low down) with the result that someone seems to have thought that the silencer hangs from the rubber mount instead of the tab sitting on the top of the bobbin, which itself sits on top of the welded-on chassis bracket. I’ve had problems with noise from the exhaust hitting somewhere on the chassis, and now I have the floor out, I can see why! The front pipe is sitting way too low where it exits the hole through the crossmember. I suppose it’s possible someone may have installed the silencer backwards, and will check that tomorrow. Any tips welcome!
While I’m at it, does anyone know if the side-exit type rear pipe is made by anyone these days?

I purchased a single pipe stainless system from Double ‘S’ Systems via Norman Motors in London, UK back in 1999. The system lined up with the original mounting points in all respects except for the piece that went from the down pipe through the cross member. I ended up going to a shop that specialized in fabricating custom systems and they made up the step up section. At the time the chap suggested I purchase the type of clamps used on truck exhausts (long with large bolts that clamp down over a length of some 5-6 inches) as opposed to the usual ‘u’ clamps. The advantage being ease of removal at a later date, undo the bolts and spray a little WD40 on the join and they will separate readily he claimed.

I am sure if I had been in the UK I could have resolved things with Norman Motors, but being in Canada it was quicker, not to mention cheaper, to do what I did. The system continues to function well after some 20 years.

Try P D GOUGH who make excellent and authentic copy exhaust systems in both Stainless Steel and Mild Steel. They were recommended to me for their excellent workmanship and authenticity, so after thoroughly checking other systems available, I purchased my XK140 Twin Mild Steel system from me. See … https://www.pdgough.com/

They did send me photos of an original XK120 single system during my discussions, but do make both single and dual XK120 systems in mild steel (my preference) or stainless steel (if you must)

I had much trouble with the branch downpipe from Ames/Falcon. I believe their problem was that they only see RHD cars in the UK and made it to fit RHD cars, and don’t realize how very little space there is between the sump and the brake master cylinder on LHD cars. I had to do some serious bending to get it to clear the master cylinder shield.
I also found the rear mounting tab on the muffler would not reach to the chassis hanger, so I had to grind it off and reweld it.

Thanks, guys - this is all very useful information.

Took the silencer off today. Basically, it seems fine - just the front mounting bracket welded on in the wrong place. Also, the rear strap which the rubber bobbin sits on has been bent up way out of shape by some cowboy who seemed to think that the exhaust system should hang off the rubber mounts, instead of sit on top of them. I’ve taken it to a welder round the corner who is going to cut off the offending tab and re-weld it at the top front edge of the silencer. I’ve measured it up pretty carefully and the front pipe should be sitting nice and central in the crossmember hole when it’s all back on.

Still have body off chassis on my LHD 120 fhc. Very tight quarters near the MC heat shield.

You definitely want to work out the exhaust before putting the body back on, infinitely easier to make corrections that way, especially with the single system on LHD.

Can anyone show me how the tailpipe (single rear exit not side exit) mounts to the body or chassis of the 120 OTS? I was hoping the revised XK120 Explored might show this, but it concentrates on the twin system, unfortunately. At the moment I have a rubber bobbin mounting directly to the floor of the spare wheel compartment, but I’m not sure if this is correct?

There is or should be a tab welded to the inboard side of the chassis frame just ahead of the rear spring mounting point. 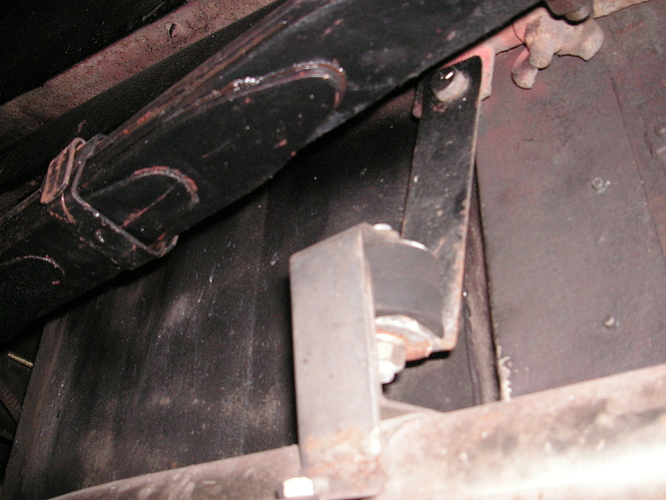 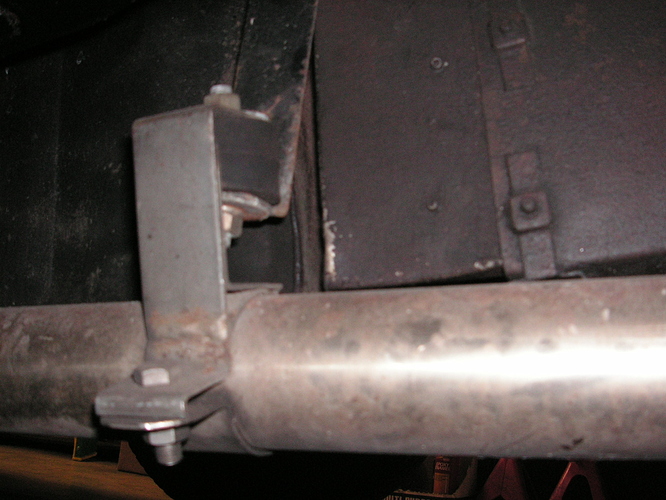 Could this be original one? 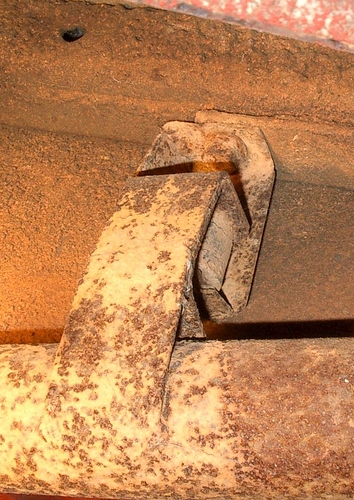 Tadek’s may be a later variation.
Here is one shaped like a channel on an early steel OTS. 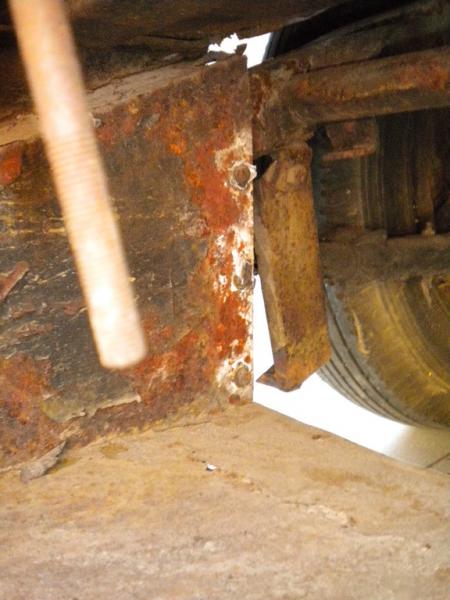 This is really useful, Tadek & Rob. I will look for a tab on the chassis where you suggest. I wonder if anyone makes the hanger which mounts on the exhaust pipe? Mine (stainless) just has a small tab with a hole in it, so would not fit on the arrangement you describe. I suppose one can easily be made, though. I wonder where exactly the tailpipe should emerge from the rear, in relation, say, to the LH bumper?

absolutely totally correct never seen the full set up.
was this a side exit exhaust or single out the back?

Terry, mine had the side exhaust originally, but now has the rear exit type, which I prefer the look of, I think. No one seems to make the side exit type these days, anyway.

Mine exits directly under the LR bumper. This is a Falcon stainless system from Dick Ames about 25 years old. The clip-on hanger around the pipe came with it. 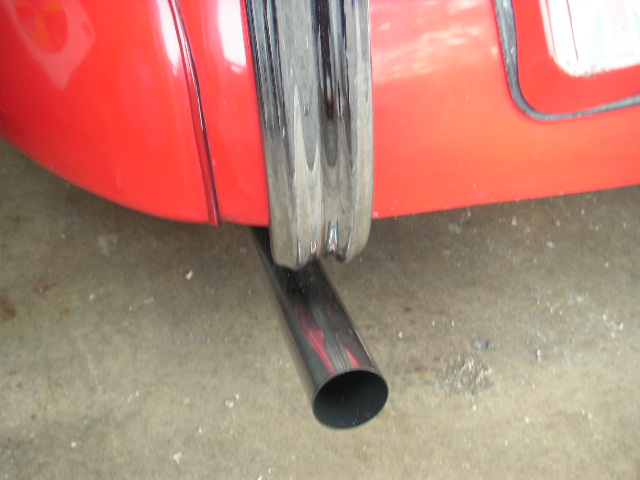 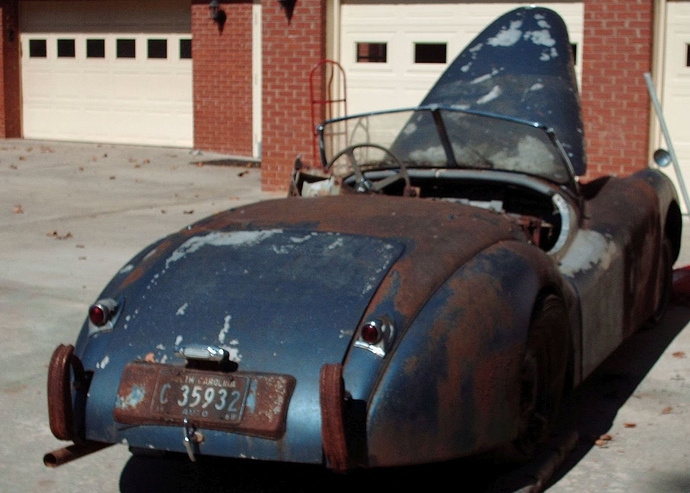 Rob, I will look for the tab on my chassis. Tadek, your picture seems like the bracket may be attached via the front mounting bolt for the lower part of the bumper iron. I can see the same hole in the side of the chassis leg in photos of my car. 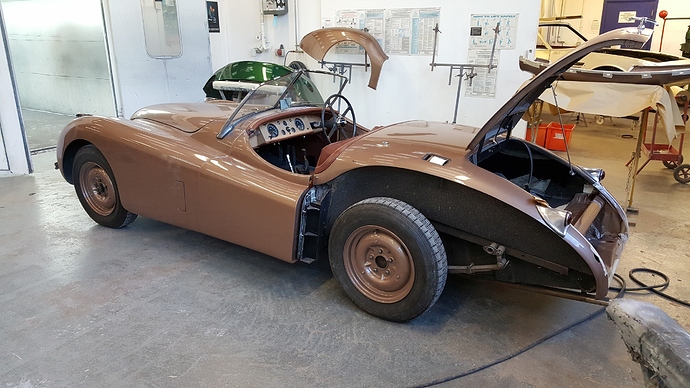 Thanks for the pics of tailpipe position, guys - very useful. Strangely, “XK120 Explored” shows the layout in plan view on p144, and shows the single tailpipe apparently mounting to the floor of the spare wheel tray. Maybe this was the case with later XK120s? Confusingly, it also states “early cars with tail pipe exit on side of the car until May 1952” then 3 pages later contradicts itself by saying that the lateral exhaust was fitted to steel bodied cars prior to 660093 RHD (which is May 1950!) I know from period photos that my car (built Dec 1950) had the lateral exhaust.
Urs Schmid’s book has one photo of the tailpipe mounting for single rear-exiting exhaust which is similar to Rob’s pictures above, except the horizontal flange is hanging from the rubber bobbin, instead of sitting on top of it. However, it seems to be a modern stainless system, so accuracy can’t be certain… As the rear tab for the silencer also sits on top of the bobbin, it seems likely that this is also the way the tailpipe tab should sit.

When in doubt, consult the…
or maybe that should be, to increase your doubts…
consult the SPC? 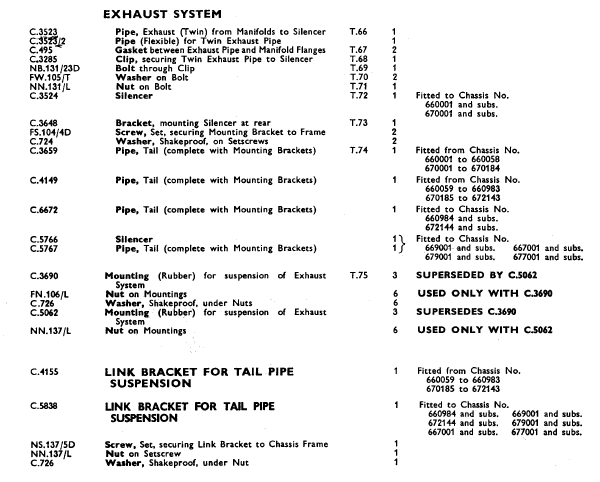 It would appear the side exit pipe ran to about May 1952? But not on FHC which had a different silencer for some reason.