I have a 1950 xk120 and it appears that the starter just died on it. Any tips on removing it? It was a workout getting the bolts out, but was able to do it. It helped that I removed the throttle linkage to get to the top bolt. Now I cannot remove the starter. Could it be hung up on the flywheel? Any help would be appreciated.

It should drop out, perhaps with a sharp rap or two with a rubber mallet. If however the stater pinion is jammed in the flywheel you may need to either put the car in reverse or first gear and attempt to rock it free, or gearbox in neutral whilst rocking the engine back and forth with a socket on the damper bolt, both easier done with the spark plugs removed.

Have you tried taking the cap off the front end of the starter and using a 1/2" wrench to turn the drive? When my MK IX starter jammed years back this method popped it free.

Remember that the pinion is behind the flywheel! If you’ve removed the bolts, the starter may drop a little bit and you cannot get it out. Just lift the entire starter motor a bit and then pull it forward (horizontally).

Unless of course you’re pinion is jammed as mentioned in the other reactions.

On an early 120 bell housing this may possibly be a case of wrong starter.
The later starters have a larger diameter coil spring on the back end of the pinion, which will not fit past the flywheel and through the opening in the early bell housing.
Why did you have to remove the throttle linkage? Is it RHD?

Don’t do what the PO of my car did - drill a 2" dia hole in the bottom of the bellhousing, getting the first one in the wrong place, so drilling another further over. According to the invoices that came with the car, this was to enable removal of the starter motor in '83.

I did and can turn it easily. Maybe I need to wiggle it to get it removed? Thanks for your help.

The car is LHD and the rod for the throttle linkage was directly over the upper bolt. By removing it I was able to get the wrench on the back side of the bolt. Made life a lot easier. I am going to try lifting the starter up to remove it. If that doesn’t work I will then compare starter numbers to the numbers on the car. I appreciate all the help. I am new to Jag ownership and have a lot to learn. Love the car though.

That is surprising that your throttle linkage was so close to the upper bolt. Mine is also LHD and much higher, in fact above the shelf on the firewall (UK = scuttle). 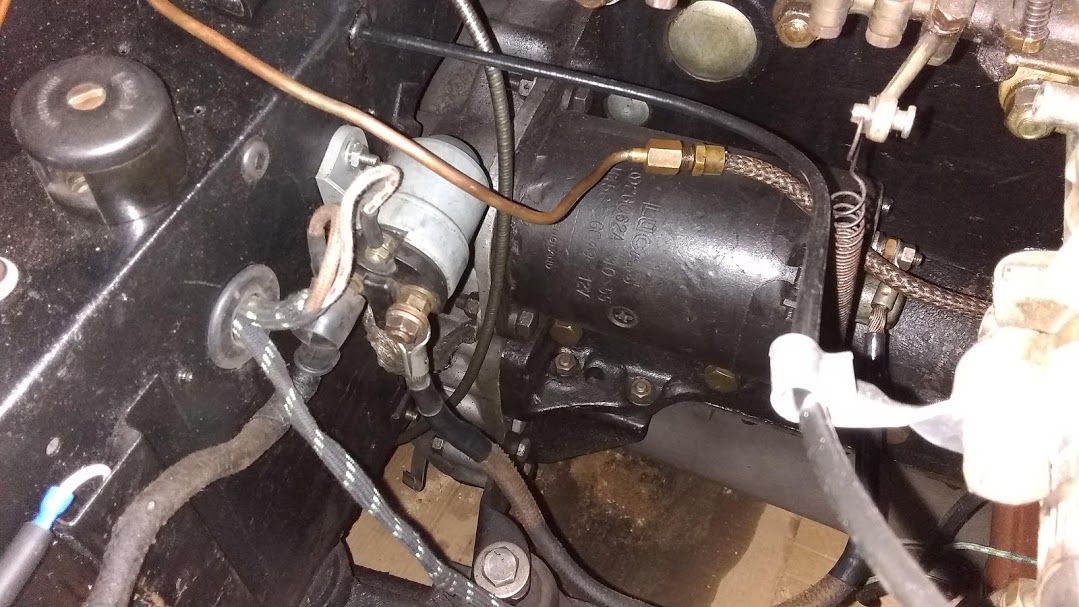 The earliest bell housing can be recognized by having a straight hump for the starter pinion spring. 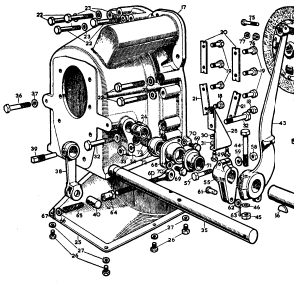 The later bell housings all have a stepped hump, larger at the front than the rear, to give more clearance for the pinion spring. 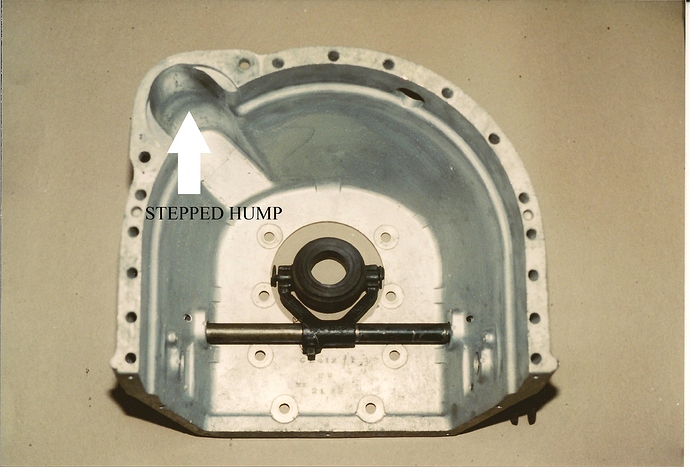 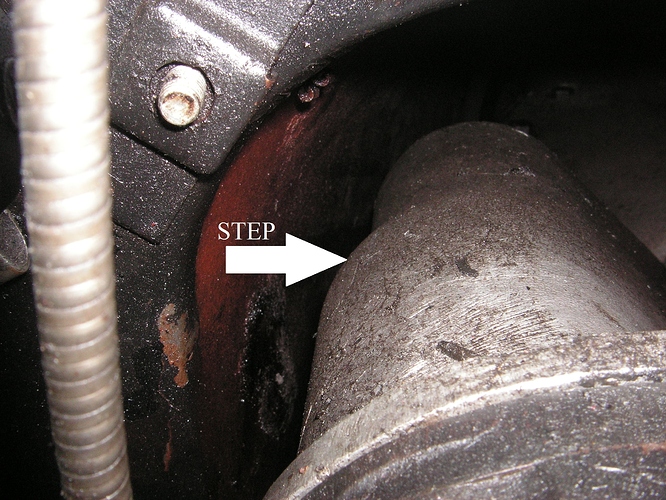 PICT00262560×1920 1.12 MB
Also the bracket connecting the bell housing to the engine block on the steering side will have only two bolts on the earliest one, where all the later bell housings except the second one have three bolts. 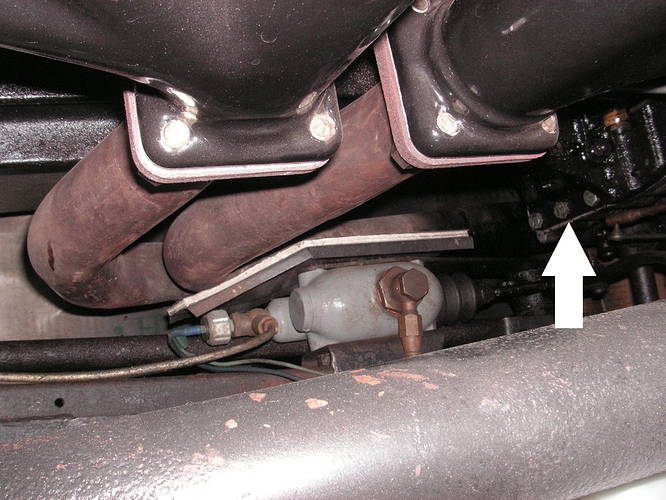 PICT00212560×1920 1.11 MB
The factory Spare Parts Catalogue gives engine numbers for which of the bell housings was used on which engines, and which starters are associated with which bell housings, but this is not necessarily reliable as yours may have been changed at some point.

We have also come across cases of incorrect flywheel from a Mark 1 or 2 saloon used in an XK, but it is slightly smaller and probably would not prevent the starter removal, so let’s not go there until we identify the bell housing and starter.

Thanks for all the info, I really appreciate it. From what I know so far the car was restored in the late 70s. Still trying to find out the history on it. Here is a photo of it. The previous owner put the racing numbers on it. The engine has been modified to “M” specs, but still has the matching head on it. Looks like it is still a numbers matching car for the most part. 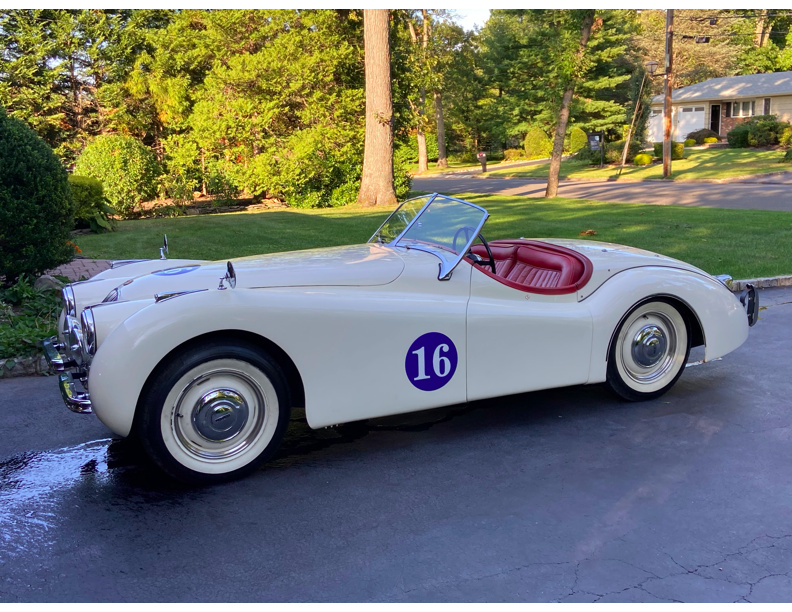 Rob, thanks again. I have a stepped bell housing, but with only two bolts on the drivers side of the housing. Will make another attempt later today.

Well I am running out of options. Starter turns with the wrench with slight resistance. Can only get the starter out about 1/4 inch. Tried pivoting it in all directions. To me it seems like the spring? is hanging up? The starter is a 26062 A which is proper for the bell housing on the car. Any further advise would be appreciated.

This then is the starter you have. 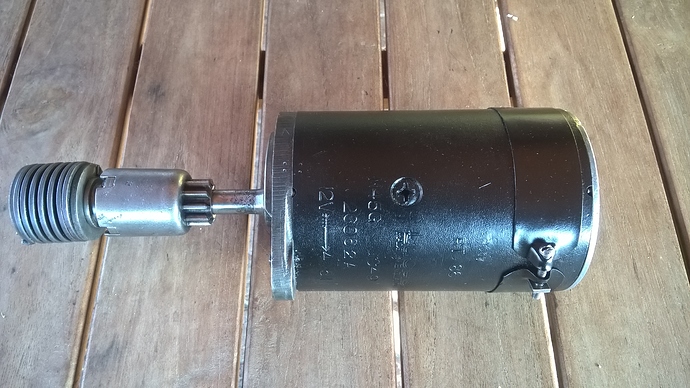 Yes that is the starter and I have the stepped hump bell housing. I will keep trying, Thanks for your patience

Something isnt right here. 4 hrs of trying to get this starter out. Im out of ideas.

Can you post a picture?
We began with the statement that it was stuck. Does this mean the pinion gear is stuck on the shaft?
Is the pinion moved back against the spring, or is it moved forward against the starter body?

Here I. Photo. That is as far as I can get it out 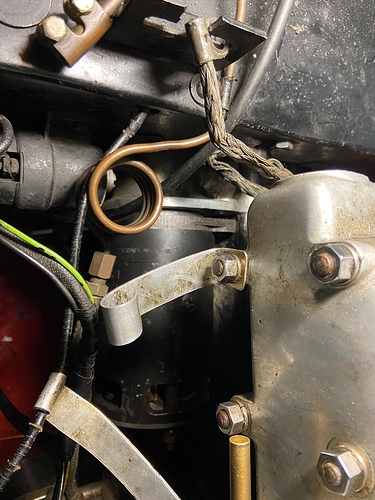 I can rotate the pinion gear so I assume we are free from the flywheel. I can’t seem to get an angle right to pull it out. Could the spring be extended somehow?

Ok I am inclined to think the pinion gear is stuck on the shaft and not disengaged or slid back as far as it should. Try spraying penetrating oil in that gap and maybe some of it will get on the shaft and loosen up the pinion. It would be better if you have a spray can with a plastic tube to direct the oil in there, rather than a scattering spray.

Ok so I finally got it out. Hurray. I sprayed penetrating oil in the gap. Took out the plugs and rocked the car in gear. The pinion released and got the unit out in no time at all. thanks for all the help here. I couldn’t have done it without this forum. Once again Thanks for the help.