I’ve had my XK120 back on the road for just under three weeks and approaching the end of the fettling process - new guts in the control box, new water pump, resolved sticking brakes (m/c freeplay) and clutch adjustment. Carb tuneup next in line.

I’ve installed an NOS mild steel exhaust system with a twin flow through silencer branded “Servais Nolos”. But “silencer” is a misnomer. The exhaust note is very LOUD, as in race car loud. Too loud for my taste, and doubtless my quiet neighbourhood.

Is there a muffler option that preserves the lovely XK120 exhaust note but at a lower decibel level?

Looks like I’m left with a visit to one of the local shops that does custom exhaust work.

Unfortunately, I have a single system on my DHC. I went through the “Hawthorn on the Mulsanne” phase some years back and fitted a dual system complete with two Thrush fiberglas-packed mufflers (remember those?) which produced a glorious racket, but then I got older and wiser (!?) and switched to a Double S stainless single system. As such I cannot vouch for their double, however, the single has a really pleasant muted drone at cruising speed and does not make excessive noise if the revs are wound up a tad.

P.S. Transmission going back in tomorrow, all being well.

A quiet single system is what I have planned for my fhc. My opinion" fwiw" is that the cars really do not need a “look at me” loud muffler. They stand out in the crowd quite nicely on their own. Keep in mind I am an old guy who does not want people on my lawn.

P.S. Transmission going back in tomorrow, all being well.

Congratulations, Chris. Hope it goes well. I expect to be pulling the engine/gearbox this winter to address a few issues. The Moss gearbox operates as well as might be expected but the new seals I installed a few decades ago are leaking. I did only an engine refresh - boilout, cylinder hone, modern front seal, lapped valves, new springs, rings and bearings - and it runs well but burns a bit of oil. I’ll get the head rebuilt with guide seals and go for a rebore to fit a set of new pistons. I really like the Mahles I put into the E-type.

Agreed. I’ll stick with the dual system but see what the local custom shop can come up with a muffler that will fit under the car. I’d have no problem fabbing and welding on the front flanges and rear mount. Another project for winter. For now I’ll go easy on the throttle while in town.

The stainless 1-in, 2-out system offered by Engel Imports, under part # JR035, has a much softer sound and also has he advantage of improving the car’s profile by passing through the opening in the frame, instead of under it.
I have been through several standard 2-in, 2-out systems only to have them get louder and louder as the internal packing/sound-suppressing fiberglass disintegrates and blows out the back. Dick Ames provided a full replacement muffler after I told him that, on a couple of long trips, the back of my black car was covered with minute shreds of fiberglass from the muffler. He told me to strike the muffler with something metal… if it made a “klunk” sound, the packing was still intact…, if it made more of a ringing sound, it was essentially “blown-out”. The “klunk” sound won.
No question why the FHC’s and DHC’s went to single exhaust systems on later models… the early ones were just too loud.

Is there a muffler option that preserves the lovely XK120 exhaust note but at a lower decibel level?

Nick, PD Gough in Nottingham, UK can supply accurate mild-steel exhaust systems for XK120, both authentic complete single systems or complete twin systems, and they are happy to supply just the downpipe(s), just the muffler(s), or just the tail pipe(s), whatever you want… I don’t have first hand experience with their XK120 systems, but am a very happy customer for their complete XK140 Twin System with the only omission being they supply tail pipes with just bare mild-steel ends, rather than the originals having the last 9inches or so directly chrome plated - easy enough job for your local chrome plater… (Have also put a local friend onto the same twin XK140 system, as he also didn’t want stainless-steel system given apart from being non-authentic, they have a higher-pitched ‘tinny’ noise, and he also is very happy, … Exhaust Manufacturers | Classic Exhaust and Manifolds | P.D. Gough (pdgough.com)

No issues at all shipping complete system to Australia, so Canada will be a snack…

I tried the Burgess Double system on my FHC in the '90s, but it was just too loud inside, like riding in a tympani. Ok for racers in OTSs, but even the factory dropped it from the FHC after a few months.
I went with the Falcon single system from Dick Ames of Florida. He is gone now so I don’t feel too bad about saying the Falcon system was bad, nearly impossible to fit into a LHD car, getting around the brake master cylinder. The double system drops below the master, but the single passes beside it.

I was in a hurry and on a low budget so I managed to modify parts and get them to fit. I squawked about it on this forum so you can probably find my old rantings.
I keep saying I’ll get a new one from Double S someday, but it’s still on there.

If you ask for a new “original” type of mild steel silencer, let them use glass wool around the perforated pipes, just like the original Burgess versions.
Although I’ve never been able to compare the original Burgess silencer with the later “straight through” versions without glass wool (even made by Burgess themselves but probably cheaper to manufacture), Burgess claims that the glass wool would absorb the sound of the expanding gasses much better. See also the picture of another Servais Straight Through silencer packed with glass wool around the perforate pipe.
In any case, the sound of a Stainless Steel silencer will always be different. 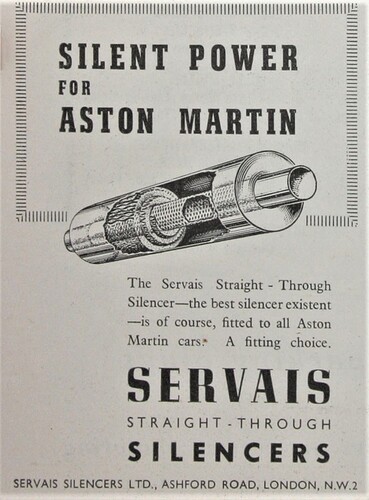 Hello Nick, Always good to hear from you ! This topic strikes a chord with me. For 40 years, I had a single exhaust on my OTS. It was a great system, out of the UK from a company no longer around. It was great because it was a little louder than other singles, but not as loud as a dual,… however it kind of lacked a growl that I envied on my brother’s DHC. So I bought the same exact system ( Double SS) as he had, and guess what… mine was louder ! A lot ! It was then that we realized the difference was in the engines. We both have later heads on our cars, but mine has more compression. Also, my car was running much richer. Recently, I had my carbs rebuilt and they are running much leaner now. Guess what … it is a lot quieter now. My point is, there is more to the sound of an exhaust system than just how many pipes it has ! Which explains why, on this List, a dual may be too loud for one person, and just right for another; there are other factors.
Before the carb rebuild, I was thinking of putting my old system back one, but now, I’m not so sure.
The 1-In, 2-out, is a nice compromise, but in my opinion, lacks the signature “rip” at 1800, and again at 3200 RPM. For me, its not about anyone noticing me !! I like to hear the engine as it changes through the revs when I’m driving. Its the driving experience, whether you was a sedate gentleman, or exploit the racecar qualities. And an XK120 can have either character, which is very cool !
Which just means you need to have 2 or more XK120s !! And in keeping with that, I don’t think I’d ever put a dual on our FHC. It is a swift gentleman’s car, and the single sits its character perfectly,…(for now :-))) Take care, Knight

Well, that is very interesting indeed, Knight. I am running very rich at present according to my sometimes blackish exhaust and have yet to take the time to balance and tune the carburators. I had no idea a rich fuel mixture will contribute to higher decibels.

Looks like wet weather here in Niagara over the next few days. I’ll get back around to fettling in due course.

Being on holiday with little connectivity its hard for me to answer.

I have the bell ss single, before i had the double. In a fjc it was too loud i really love the single and vividly recommend.

I have installed a single 2.25 inch O. diameter exhaust pipe, stainless, no muffler , it has a Ansi Resonator twin chrome tip end. Looks nice. The .2.25 fits thru the frame hole so does not have to pass under, Math shows a 2.25 pipe gives abut 3.94. area, while twin 1.75 gives 4.2 total of 2… (not accounting for pipe wall thickness on either) I noticed a substantial hill climb power gain with the new pipe, over the old skinny single that gave only about 2.0 area, (climbs easily in 4th on hills that had required 3rd.) and a (to my ear) much nicer OTS SE sports car sound…(yes you would need to like the sound). Like a Chris Craft inboard at idle, like a sports car at go pedal down…and quite nice at cruise.
The twin chrome tips exit rear at the proper location.
Nick