This is my first post. The knowledge here is incredible, so thanks in advance. I’m looking at a 1954SE to buy, but the head number represented as matching the engine, which it does looks suspect, so I asked for a picture of the head casting. It is C4953 and below that is WM2724, and there is a smaller font “41” off to the left side. Is this really a matching head for a 1954 XK120SE? Many thanks, Dennis

Here is a pic 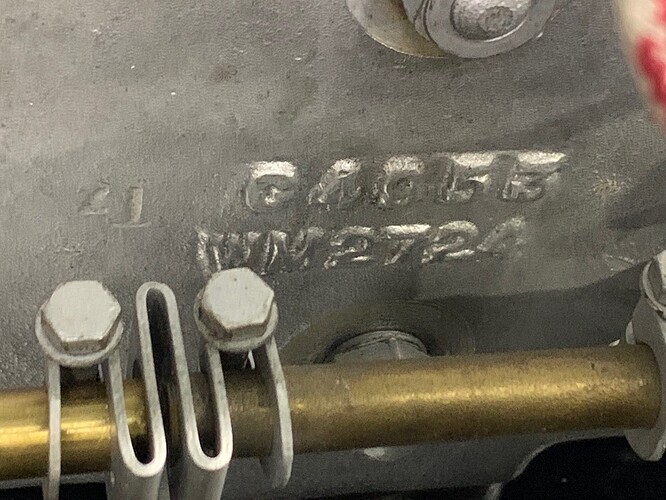 Welcome Dennis.
C4953 is the part number of the intake manifold.
WM2724 is an internal factory number used by the William Mills foundry.
41 is an inspector’s approval number.

For engine serial number you want to look at the front of the valley on the head.
And on the shelf where the oil filter is attached.
These two should match the number on the ID plate.

Thanks so much for that answer. I asked for the head casting number and they sent this photo. I have to say, after reading your 2013 casting numbers post, which is quite good, and not seeing a number close to this one, I am now relieved. What is the best description of the correct location for the casting number?
Many thanks,
Dennis

I was derelict in my query. I am looking for the head casting number exact location description so I can ask for that. So sorry about that. Many thanks, Dennis

Here is another pic of the cylinder head. 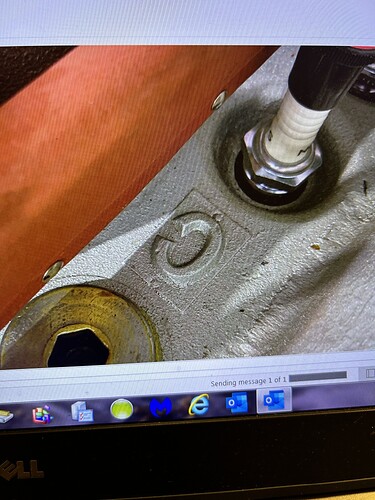 Your cylinder head with the large cast ‘C’ adjacent to the spark plug is 99% most likely from a 1955-56 XK140, and would have originally had a stamped in Engine Number at the spark plug valley vertical face with a ‘G’ prefix.
Your earlier photo showing a stamped in W3962-8 is 100% clearly not a factory original stamping which was always applied onto the as-cast aluminium surface. As you can see the background to the W3962-8 stamping is filed/ground smooth consistent with repairing the damage after removing the factory original ‘G’ prefix engine number stamping…
So up to you if this matters or not, this cylinder head is not the original for an XK120, and the restamping the W3962-8 is clearly an effort to present as a numbers-matching car - it is NOT. But then these XK140 ‘C’-type heads are 100% interchangeable, and give a significant improvement in power/performance relative to the original XK120 ‘A’ type head…

Opinions vary whether having a non-original XK140 C-type head, is preferable or not, to having the original numbers-matching XK120 A-type head…; a lot depends on what you prefer, and what you intend doing/using this XK120

If you go to the very rear of the head, on the flat spark plug surface area, there is another stamped in number. If you can provide a photo, or at least advise the number stamped in, I can narrow down its age to much better than just 1955 or 1956…

Thank you for your reply Roger. Very helpful.

Just to clear one point-the photos you referenced with the W3962 are not mine, but are part of Rob Reilly’s answer to my question and he provided the pics as examples.

Your information is quite helpful and I have requested the head “tail number” and the casting number.

Here is a pic of the head number that does match the engine. 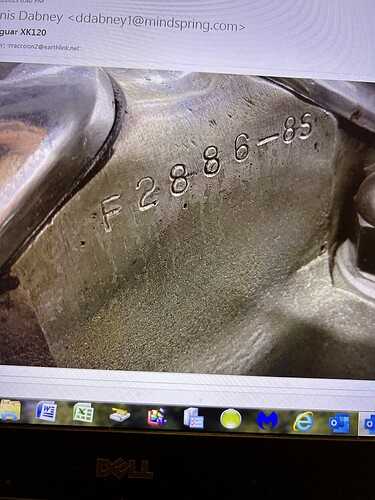 Roger, here is what they sent 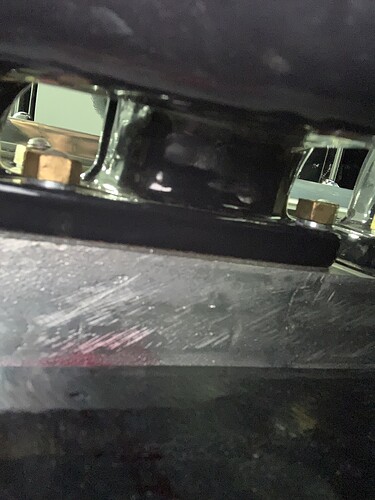 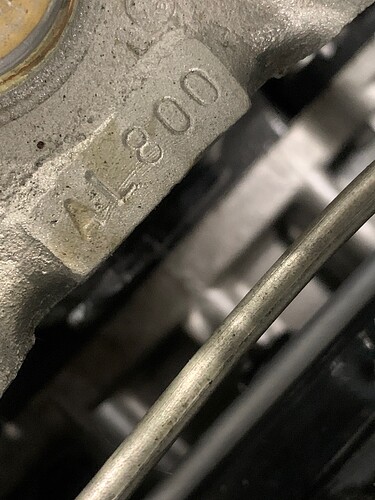 Roger, the top photo is of the Casting Number on the suspect head and the second is the number on the back top part of the head, as you requested to hopefully provide the head source or vintage. Many thanks ! Dennis

Roger, the top photo is of the Casting Number on the suspect head and the second is the number on the back top part of the head

Denis - this is getting VERY interesting…
The AL800 stamping is what I call the HSN (Head Sequence Number) and this is an reasonably accurate indicator of the age of the head, as they are stamped in in sequential order by the Jaguar machine/head shop as the raw head casting is machined up to its required specification, for subsequent allocation to the Engine shop that then builds up complete engines at which point the ENGINE No is stamped in…
Where I go now is speculative, albeit reasonably informed based on a huge amount of research into XK engine Cylinder Heads, but at this stage I am somewhat short of any confident conclusions…, thus my ‘very interesting comment’
The F2886-8S Engine Number stamping, is under normal circumstances an Engine Number you would find in about a May 1954 XK120…; presumably matching the Engine No on this cars original CHASSIS-PLATE - can you advise Chassis Number (send me a personal message, if you dont want this public )

Photos of the underside of the head usually reveal all, but the picture you have provided is of some concern…, as it appears that this near-central exhaust side is fully machined, suggesting considerable planing/machining of the head. With a WYF Head that is the usual foundry that made the heads with the large cast in ‘C’, and there should be raised cast letters visible there, so I wonder also about the scratching still evident that the planing hasn’t removed, a better photo would help. There is another possible explanation, but I would need to see numbers under the inlet side of the head, towards the front end…

You mentioned in 2005 that "The first of these ‘production’ C-type heads did not have the raised-cast ‘C’ on the spark plug valley, that being added in early 1955 (I have rough demarcation point)"***.

If the picture with the “C” in the spark plug valley of the head casting, belongs to F2886-8S (May 1954) than this would be really a novelty and even a revolution regarding the development and production of the C-type head.
As the HSN number seems correct for early May 1954, the real question is whether the “C” photo really belongs to this head.
In any case we all know what the correct casting number should be and it all will soon become clear (I assume…).

The “C” definitely belongs to this head.
Thanks,
Dennis

Can we get a better original photo of C casting
I note most C type head seem to have serial numbers BY BZ etc AL ssems to be unbelievably early and the stamped font is unusual.
Can we get some over pics of motor. 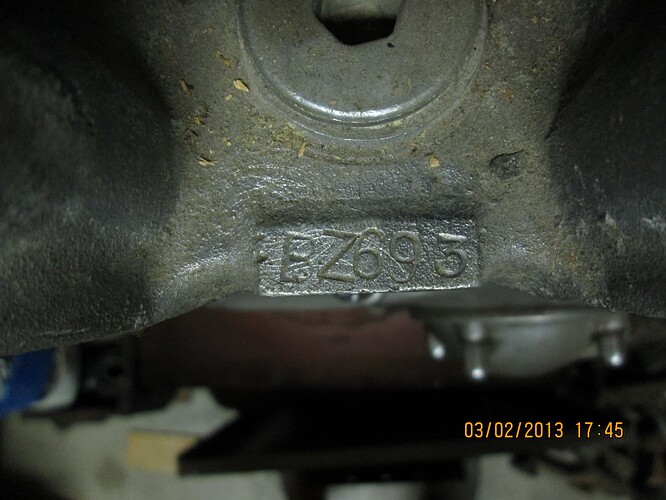 Been a fair bit going on privately/direct, but for those following this string, I am 99.999% convinced the Head on this XK120 is indeed a reidentified/faked head originally an XK140 C-type head dating from later 1955/56, and definately not the original XK120 A-type head with Engine No F2885-8S.
So if a numbers matching XK120 was a priority, then this is not a car to buy…
Having said that, on XK Data there are many photos of this car, revealing it to now have disc-wheels, rear spats (wheel covers) and a single exhaust system, somewhat at odds with Heritage Certificate confirming it to be a Special Equipment XK120…
And for those into detail - lots of other minor and major things wrong, regardless of being apparently by photos, a very high standard restoration…

I have advised Dennis accordingly…

I wonder which favour did the seller -or restorer- do to this car: a matching numbers car, with block, gearbox, chassis matching would be very appealing, and possibly forgiven, for having a non-matching (and improved) head.

When I bought my FHC, matching numbers was frankly secondary, but honesty of the seller, of primary concern. 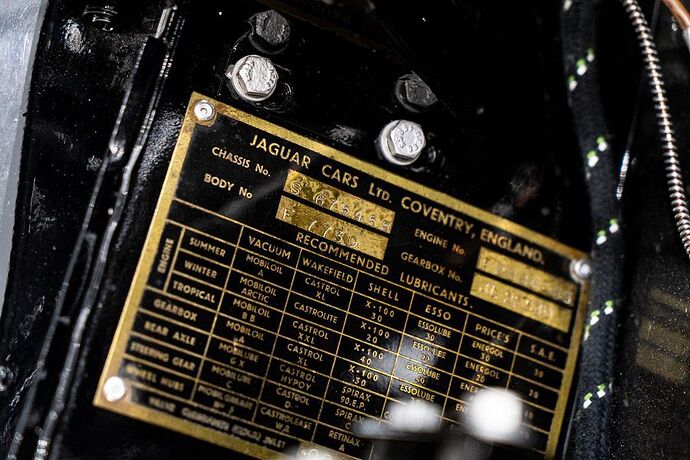 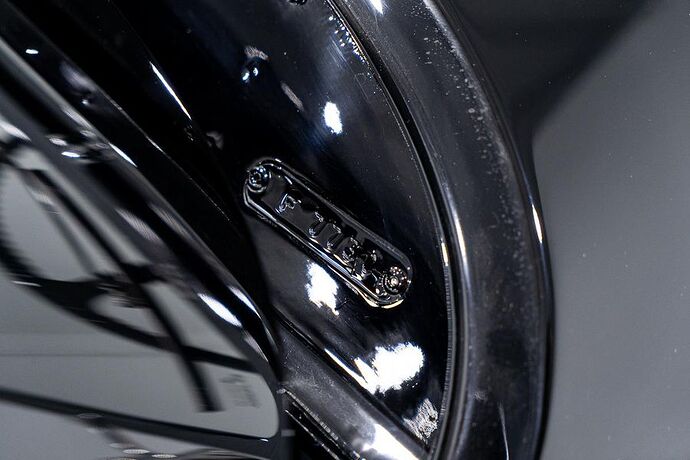 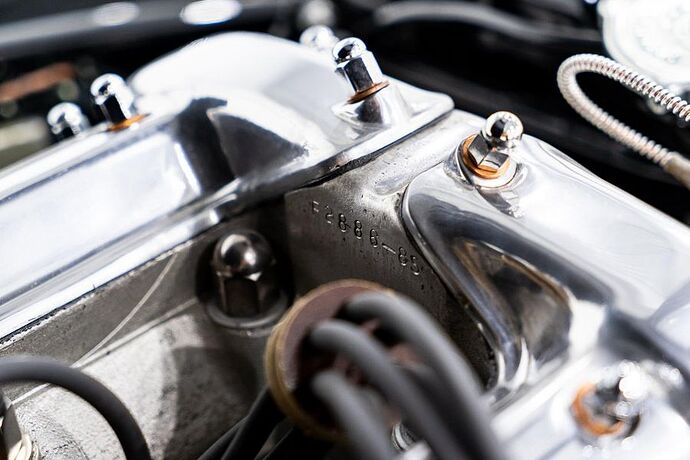 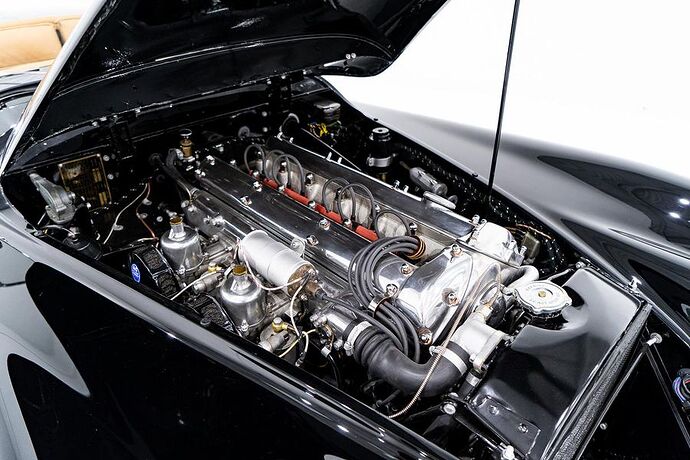 with all that is going on here…have we seen: the engine number on the flat by the oil filter; a chassis number actually on the chassis frame, left side rail…and hopefully verified by a chassis number on the front cross frame in front of and below the radiator–(often “missed” when someone fools with the left side frame number. Then…I think as Roger is looking for , would there be a C7707 under the head lip?
Nick