My Grandfather (Harry James Butler) worked for many years for the Dunlop Aircraft Division but in the late 1940’s was tasked with adapting the early aircraft disc brakes for use in cars. As the Chief Design Engineer and overcoming many problems,
Harry devised the first disc brakes to be used in cars. His ingenuity resulted in their demonstration and ultimate triumph in the Le Mans 24 hour races in the 1950’s Jaguar D type. Their superiority in braking performance over drum brakes meant that the D types could decelerate much later when approaching corners and this was attributed to their winning streak.

I have many of the original detailed technical drawings, specifications and patents which may be of interest to your forum members. His design, first used on the D type and put into production on the XK 150, was the predecessor of the disc brakes we all use today.

In addition, I have some photographs, launch brochure and pre-launch publicity information which I would be happy to share if anyone is interested in! This includes an intriguing Nazi alternative to the use of as asbestos for brake pads- which I believe Dunlop didn’t follow up on.

In addition, I have some photographs, launch brochure and pre-launch publicity information which I would be happy to share if anyone is interested in!

I think a lot of us would be extremely interested in receiving ANY of the info and photos you are willing to share Jon. wonderful story.
best regards

If I recall my history right, Dunlop disc brakes were first used on the C-Type for the 1953 racing season.
One of the development challenges was that for airplanes the brakes are used once very hard in a landing and then have plenty of time to cool off. But for racing cars they are used many times in a circuit and the cooling was the big problem to solve.

You are correct, I have re-read an article that appeared in an edition of Autocar in 1983. See attached. I tried sending this earlier together with a lot of other material but exceeded the allowed limit, so I have reduced the number of attachments. Hopefully you will see the article now. 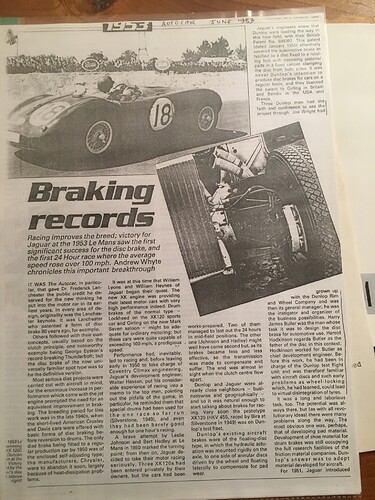 Jon
PS it appears I can only upload one media article at a time to the forum. The actual article is three pages long!

Here’s a taster of other stuff. 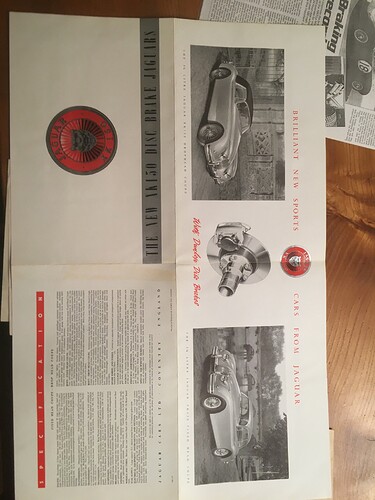 Wonderful stuff Jon. Thanks for sharing

Here is the second page of the article. 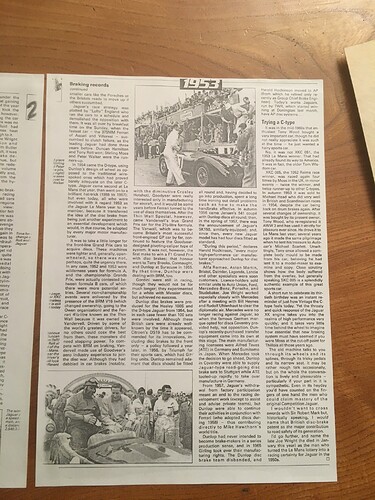 Let me know if you want the last page and any other newspaper clippings and details of the launch publicity and specification for the first XK150 drop head and coupe.

Hi Jon, Welcome! I would love to see any detailed drawings or photos!
The development of these disc brakes on the C-type was a major undertaking by Jaguar, and a bit of an evolution. I am putting them on the car I’m building, and I will tell you there is way more than just bolting them up!
The first evolution used just a single solid caliper with no power assist. This set up was used on cars 001, 003, 005, and 011 up to mid 1952. 005 won at Reims in 1952 on disc brakes, with Moss at the wheel. The first win with disc brakes.
By the end of 1952 they were redesigning the system. The second evolution used a separate steel bridge and aluminum calipers, this increased pad thickness for longer running at Le Mans. But there was another major issue they had to tackle. The Salisbury rear axel had a lot of pay in the components and really could not be tightened up. When running at high speed the rear disc would rattle and push the pads back in the calipers. When applying the brakes it would often take a few pumps to get the peddle firm. -This did not inspire confidence!
So Jaguar developed a type of power asset for just the rear brakes. This was done by adding a pump to the system. They took the aluminum tail case off the JH gearbox and modified the main shaft to accept a gear to power a pump, similar to the speedo gear but a little larger. This required a completely new aluminum tail case and chassis mounting. This tail case had a Plessey pump (used commonly in aircraft and agriculture) that was powered off that new main shaft gear. A new master cylinder along with other components were developed to control this pressurized system for the rear brakes.
Now when the driver applied the brakes the high pressure would travel to the rear calipers and take up the pad slack immediately. This system worked very well, but because the pump was hooked up to the main shaft of the gearbox the faster you went the more pressure the rear brakes received. The drivers just had to be aware of this, but it was like throwing a boat anchor off the back of the car at high speed!
This same system was carried over and used on the D-type. They continued the development with the works long nose D-types and designed the single pad system.
All of this racing design made it’s way into the XK150 road cars, and eventually into almost every car today. 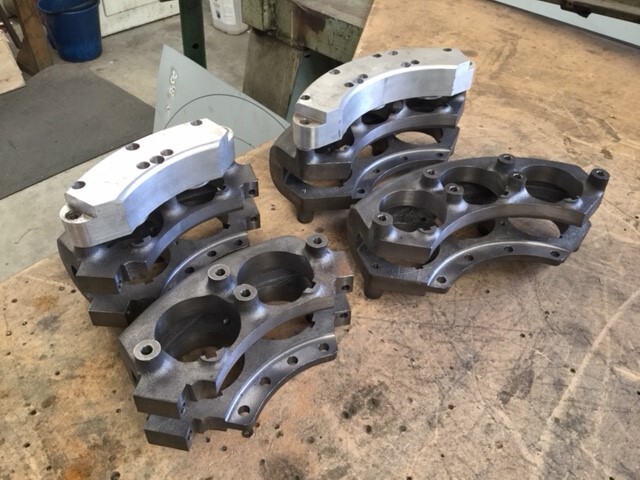 Thanks for the interesting potted history. I have all of the original patent applications, and loads more besides. If you google Henry James Butler Disc Brake (he was known as Harry by the family) you will see some of the patent applications. Maybe one will be of help in your rebuild.

There is a far amount of information in a book called “We Re-invented the Wheel” by Ron Vice.

I would like to share more details but seem to be limited to one image at a time on the forum. Here is one comparing the aircraft plate brake with the car calliper disc brake. image|375x500

The missing page of this article. 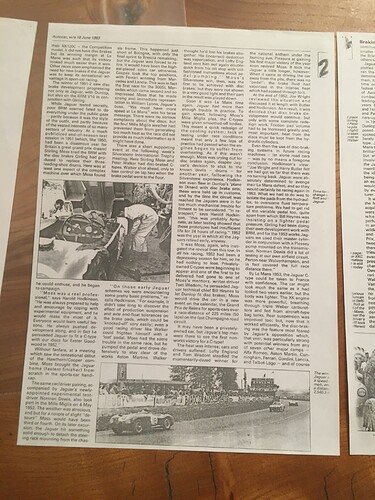