Hi All…refurbing the front end of my 150fhc 1960…im after photo/info on the panel that closes the under side of the A post front wing/fender. …whats under there…is it attached to the wing/fender or just butted up to it…mine are obviously home had from ali rivited on and covered in black underseal…thanks for your help…Steve

That plate is only attached to the underside of the A-frame, it must be clear from the fender.
I bolted it down, so I can remove it to get dirt out of it, if needed.

Thanks for the reply…if anyone could post a photo that would be great…is the whole area covered?..thanks…Steve 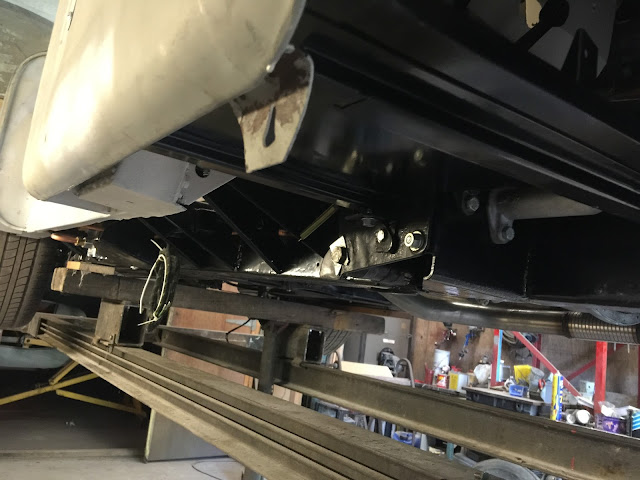 I can’t really make out what’s in the photo, Steve - but I think it’s different for 140 anyway. I only have the vertical splash panel, nothing closing the bottom channel of the A-post assembly. On my car that bottom channel is exposed, which is why I’ve taken the liberty of adding a couple of drain holes to it which the original didn’t have. After years of restoring cars for use in the British climate, I have given up trying to keep water out, and focus instead on being sure it can drain out easily.

here’s what the XK140 DHC roadster had

Are those factory fitting for the 140s, Terry? No mention of them anywhere in Viart’s 140 book, and there was nothing like that on my car when I dismantled it, nor signs of where they might have been. How do they fit? There seem to be a row of holes along one side.

Edit - just had a look in my copy of the Jaguar Spare Parts Catalogue, J.15, Amendment List issued in Feb 1957. No mention of these panels at all, so must have been a 150 part only, I think.

I’m helping with the reassembly of an XK140 OTS that was taken apart many years ago, and we’re trying to identify all the missing parts. There are two missing panels that close a rectangular space between the bottom of the scuttle and the bottom of the wings on each side of the car. This rectangular space is below the air vents and measures approximately 2 inches by 12 inches. Does anyone know the part numbers for these closing panels and if replacements are available from suppliers? Also, …

The subject of these panels has come up previously. On most XKs, they seem to have quickly rusted away, as they are made of untreated thin sheet metal. They are still intact on my XK120, which has spent most of its years in dry Arizona. In the above link, there are chassis numbers and photos of what appear to be original XK120 and XK140 panels.

Here is the underside of (XK150), Chassis No. S838240, showing the panels circled in green. The uncovered openings between the panels and door bottoms allow access to the bottom side of the lower hinge boxes. 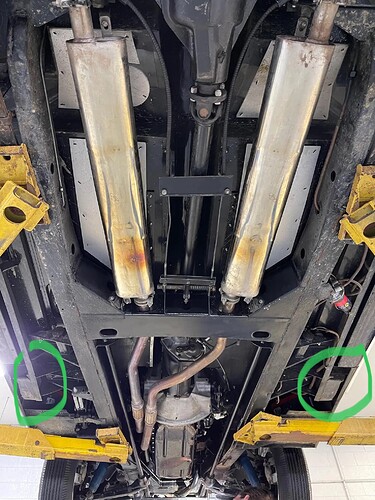 These panels usually rust out as mentioned, I have since replaced mine with galvanized material, I remove them every couple of years and spray a lubricant as far up as possible so as to reduce rusting.
Also spray as much as possible inside the chassis members.

I’m still not clear on this, being a bit dim…

Surely the metal circled in green in Mike’s photos are the undersides of the hinge boxes? I don’t see any extra panels in there - here’s a photo of the same area on my car, which does not have these panels. The metal with the two drain holes is the bottom channel of the hinge frame. 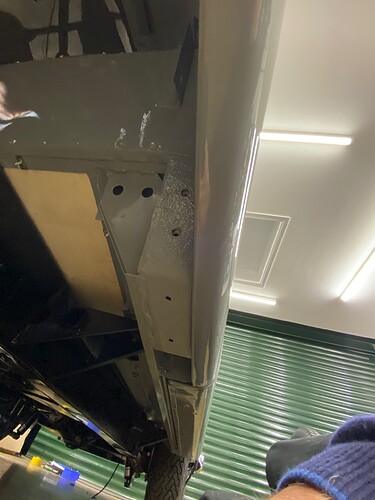 Roger, on your car the opening forward of the door bottom is the access for bottom of the lower hinge box. That area was left open from the factory and was not covered by a panel.

The drilled panel forward of the hinge box access helps protect the cavity containing the vent box assembly. From pictures I’ve seen of other XK140s, your panel appears to be original. I helped reassemble an XK140 several years ago, and fabricated replacement panels very similar to those on your car.

From what I’ve seen, these panels were of different construction for the XK120, 140, and 150. But I believe the purpose was the same - to help keep water out of the cavities containing the vent box assemblies.

Mike, the panels I’m referring to are the actual hinge box frame - in the photo I posted, the panel in front of the gap for hinge bolt access is the one shown inverted in this photo, taken when I was doing the metalwork on my car. It is the base of the frame the door hinges hang off, and is not removeable as it’s an important structural part of the body. I don’t think there are any panels in my photo that were designed for spray protection. 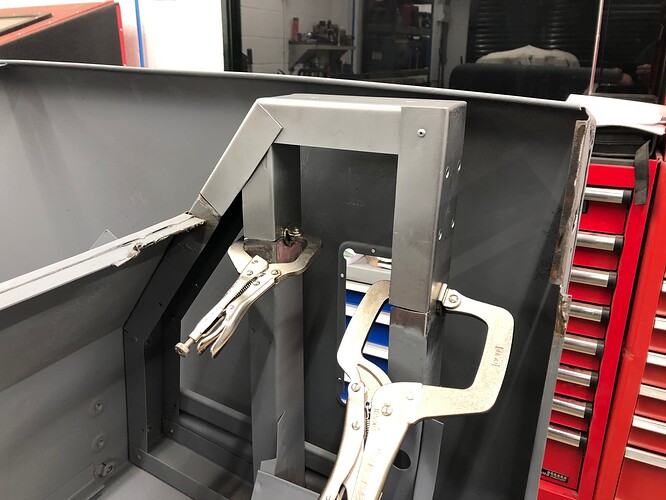 Hi Roger…the structure of the 150 is quite different to your photo above…but does basically the same job…the 150 parts catalogue lists 2 “Sealing plate between Sill and front wing” BD.10078 & BD10705…and also shown in the150 Viart book…and the drawing looks the same as that on the facebook link someone posted of the 150 panels…I think they are different to the panels circled in green a couple of photo,s above…In mybopinion that photo dosnt have the panels fitted…the clue is in the parts catalogue where they are callex “plate between sill and wing” dimensions arnt shown but i will make them long enough to cover the lower wing area…so under the vent box and covering the hinges…you should check the 140 parts catalogue for similar plates…140 either had them or didnt…Steve…ps these are the 150 panels shown on facebook with a slight turn down edge that must go towards the wing and prevent traped water…apologies if iv used someones photo. .i can easily delete it if tbere are objections…thanks 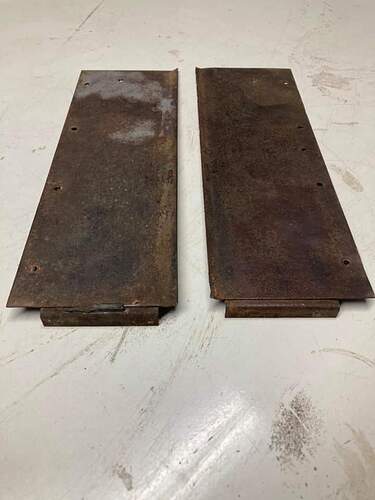 Steve, I don’t know 150s but would agree, I don’t think they are fitted in the photo. I have the 1955 J.15 parts book (not so easy as no diagrams) and the later 1957 amendment list book, both exclusively for XK140, and neither book makes mention of these panels either by description or by part number. I’d assume they are therefore 150 parts.
Possibly a good idea, though - I might make up some simple ali splash plates to keep the worst of the muck from the front tyres out of that gap. The car will have to get used to British weather now it’s left California…

HI Steve, my measurements for the panel is 270 x 110 and it has a slight turn down where it sits on the guard edge and is held on by rivets.
John

Hi all,. I think the panel in question is shown in the final YouTube episode of Richard Michael Owens XK150 Restoration at the 5:50 mark…

I’ve been trying to find out what was missing under here and now I know.
Thanks for that. Rod