My '36 sedan has developed an issue with the clutch dragging slightly (I think) as the engine/gearbox warm up. Although adjusted correctly, the clutch linkage seems to elongate so that the pedal does not have enough travel to disengage the clutch, leading to crunchie gear changes. Eventually, when hot, it will cause the car to creep forward even when the pedal is fully depressed; (engine idling, and in 1st or 2nd gear).
I can think of a number of things to check, but unfortunately some require access to a hoist or pit, so I would be most grateful for any suggestions as to where to look first.

I’m going to start with the assumption that your clutch linkage is the same as mine. 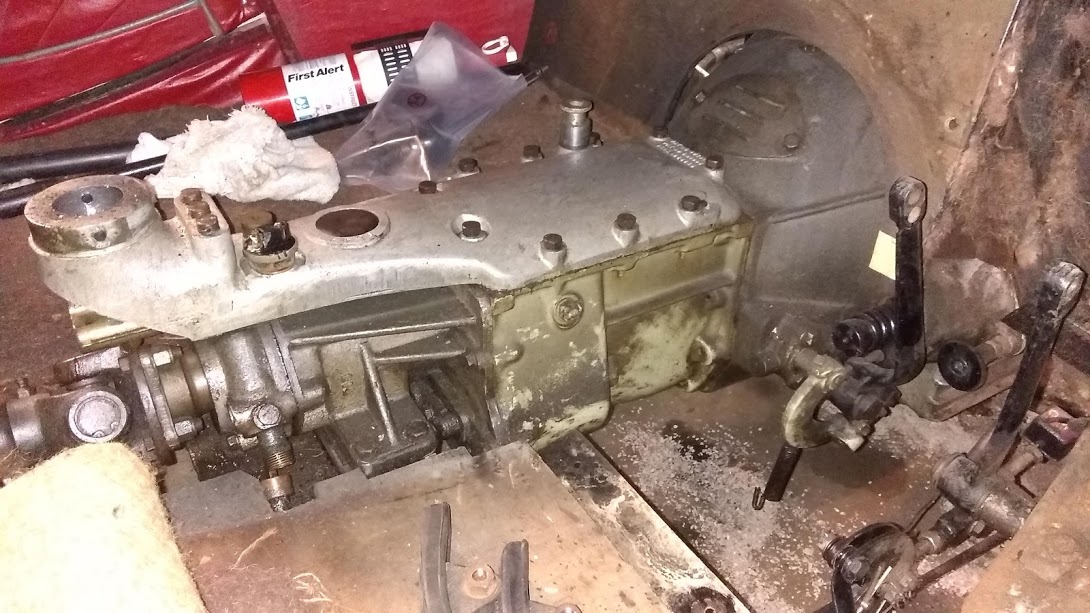 Start with the easy things first. Check the oil level in the trans.
Then look at the pedal stop. Maybe it’s put together wrong. 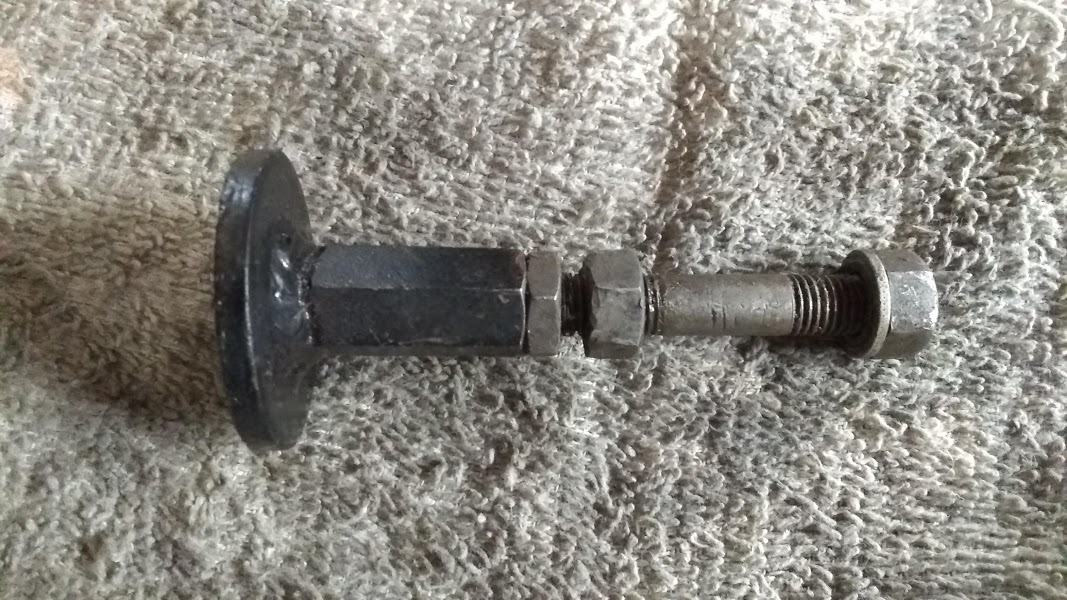 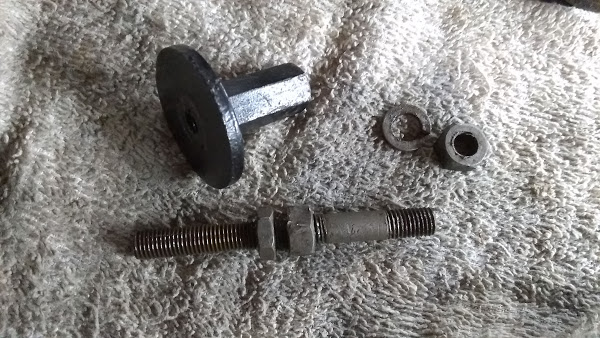 Finally, the pedal arm could be moving on the shaft. Is there a Woodruff key, or just a set screw? Set screws have been known to shear off, or partly shear. 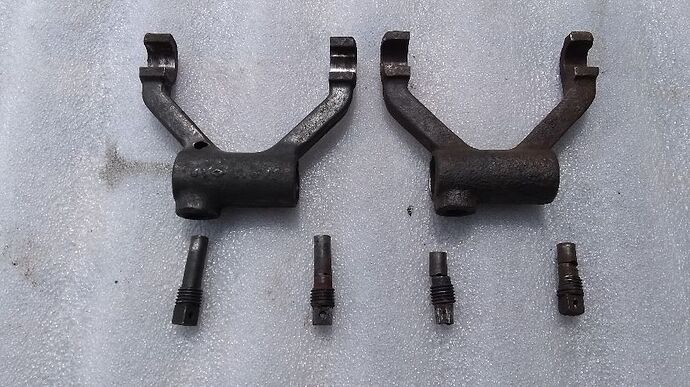 Edit: Thinking about it awhile, I think it’s a sheared pin. This problem has been reported quite often among XK120 owners, especially if they have an extra strong pressure plate.

If you adjust for zero free play in the linkage when the car has warmed up do you still find that the clutch is not fully disengaging? (I know there should be free play normally.)

The sheared pin situation is what I have found in two out of three of my Mark V 3 1/2 engines. One spare engine had sheared pin found when taking it apart. My car which was my daily driver for many years displayed the split pin sheared 5,000 miles after engine rebuild (when pin was not showing shearing evidence). The split pin was functioning partly due to the safety wire holding it in place. The damaged clutch operating shaft now is out to pasture.

My last original pin is in the assembly now. Pins in my possession which were manufactured at later dates all have some deviation from the original specification which makes them unsuitable.

That’s how I got home yesterday. Adjusted free play to ‘minimum’ I could bear, given the dire warnings about reducing the free play too much; no issues for the relatively short drive. I have done this before, but have not used the car for months, so assumed it would not have changed. If the linkage is somehow working itself loose this is intriguing, but still have no idea how to fix.
Unfortunately I can’t remember if the cross shaft has tapered pin as per the later models. The external set-up on the '36 car is not the same as the SS1, nor the later models. I will try to get a decent photo of it. I sent Alan Gibbins a very rough sketch of the linkage many years ago, as whatever model he was working on was thought to be the same as the '36, of course I now can’t recall which that was. Could it be the SS100 set up? 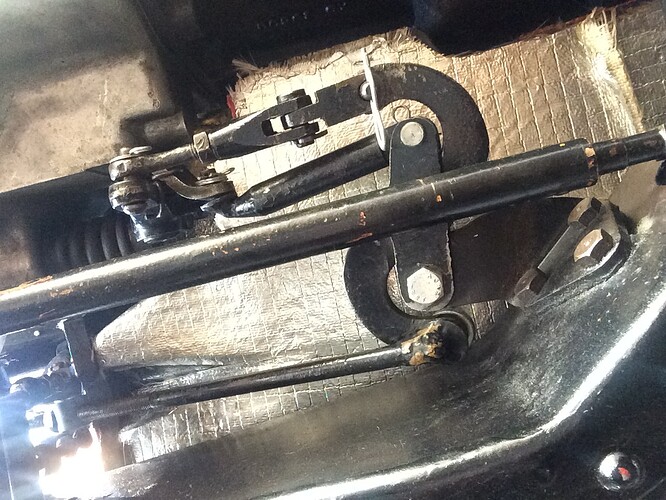 That is certainly a rather different linkage from that in the all steel cars. Roger’s shaft pin sounds like a good thing to check. My 1939 car has a similar but different problem to you. In mine my clutch doesn’t disengage properly when cold but sorts itself out after perhaps 10 miles of driving. If my car has been left for weeks without use I often find that the clutch will not disengage at all making it impossible to select first or reverse. I have always assumed that this was due to flywheel corrosion and the clutch lining welding itself by way of the corrosion. I get around this problem by holding the gear lever against the second gear synchro cone and that then lets me select first but works best if the idle speed is low (400 rpm).

One of the square headed pins is here on the throw-out yoke. 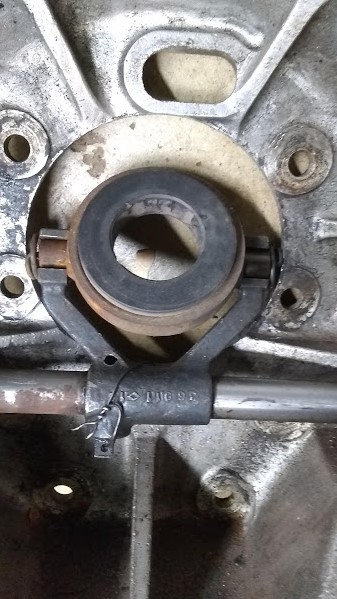 The other is here on the lever arm. 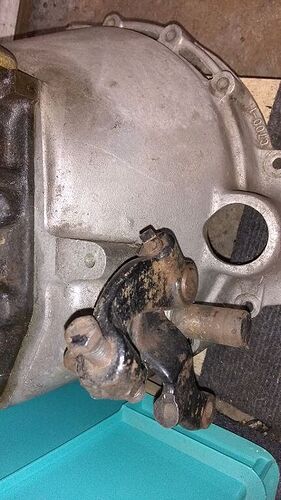 The one on the yoke gives the most trouble to XK120 owners.

Great photos thank you!
I think mine did have a wire on the square peg head on the yoke but can’t confirm! Does anyone understand why the XK120s (in particular ) have this issue? Is it just that they are driven more enthusiastically with a more powerful motor? Surely not a manifestation of the old ‘square peg in a round hole’ problem?
I am going to double nut the adjuster on its pedal end on my car and see if that stops it unwinding by itself, although this does seem unlikely to me. See my photo of a couple of days ago.

Certainly XK120s have a stronger pressure plate so there is more force required on the yoke to operate them. And they are driven more enthusiastically.
It’s a shear problem. The force on the pedal arm and the yoke arm put a shearing force on the pin. The design probably dates back to the Standard Motor Co. As a mechanical design engineer, I tend to see this as a poor design that could be improved. If I had been at Standard in the 1920s, I would have put a bolt through both sides, and maybe had a Woodruff key in there.

Here is what the Mark V clutch operating shaft and broken pin looked like when removed. The broken pin was still threaded and safety-wired in place in the yoke. The damage on the clutch shaft was from an earlier episode before my ownership. The current sheared pin occurred somewhere in the last 5,000 miles since I rebuilt the engine (it is out now for slow replacement of broken tooth in tranny). You can see the sheared element still remaining in the clutch operating shaft. 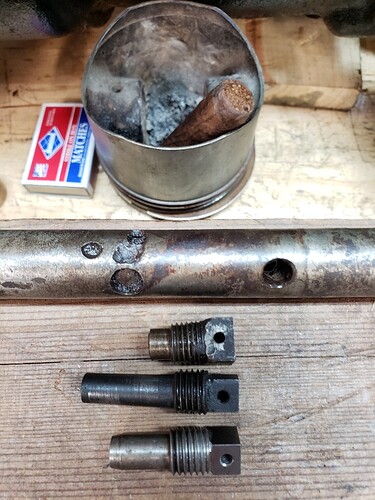 Here are three pins: one bought from a modern supplier, one remaining original in my possession, and the sheared pin parts. 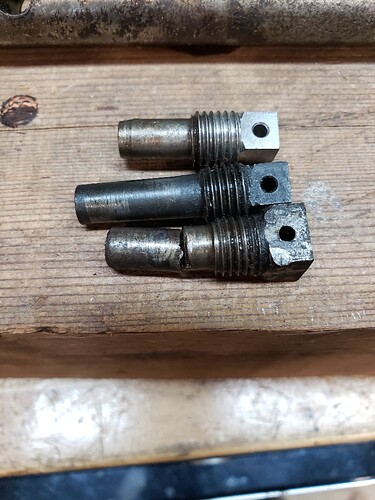 And here is the assembly ready to be married to the engine again. I’ve used the good original pin and double safety-wired. In addition, the machine shop cleaned up the shaft of a spare clutch operating shaft (by reducing the radius) to even up the wear surfaces at the bushings, made custom bushings for both ends and the yoke (about a 0.001" clearance on the yoke bushing). I put bluish mixture of demethylbenzyl hydroperoxide/acrylic acid/cumene (1 drop on yoke bushing and 1 drop on pin threads. Initially I tried four drops on yoke bushing but the 1 thou clearance caused the adhesive to set before I could align to the pin. Mapp gas application freed it up for another try). 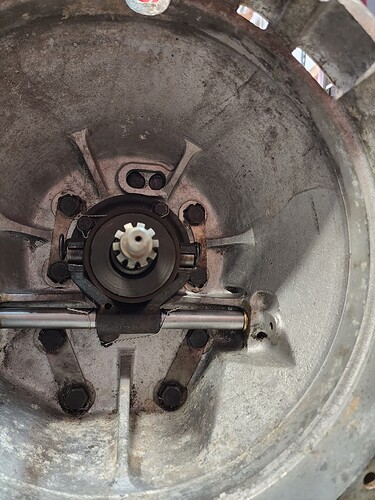 The yoke design is not good for transfer of torque from operating shaft to yoke. For most circumstances most of the torque to move the yoke is received through the pin. Why on earth was there not at least a second pin? Too hard to line up two pins (the pin has a 3/4 degree taper)? Machine shop recommended the blue adhesive to help spread the torque along the yoke tube and not just through the pin. We shall see.

Good idea on the adhesive… Hope it works. I would have preferred a woodruff key arrangement the length of the yoke, but we work with what Lyons gave us

Thank you all for useful replies. I love looking through the old (pre-1950) handbooks English car handbooks. The illustrations, usually drawings, often show superb detail. For example the Series iii Wolseley clutch shows a slot in the opening of the withdrawal fork (presumably for a key) and the Morris ‘Modern’ Eight show either the head of a rivet or a couple of threads of a screw coming through the fork and shaft.
The 1946 Hillman Minx linkage incorporates a swinging ‘S’ shaped relay lever, as does the early Mk VI Humber Hawk, similar to my car.
The mechanics of the Standard/SS/Jaguar arrangement certainly do not look robust. Why use a tapered pin instead of a through bolt?

A tapered pin will give tightest fit, least wiggle (I guess that means the smallest in the Paul Wigton lineage).

Here is a photo of the container for the adhesive I used. 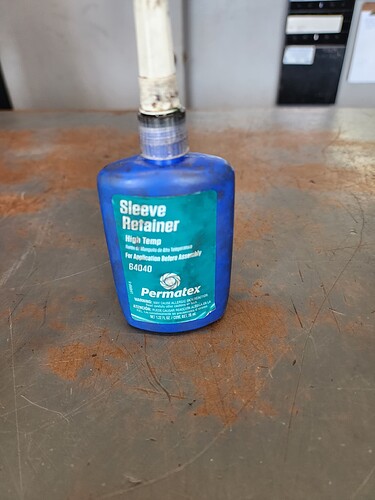 I put some high quality adhesives in the fridge, and use gladwrap between the threads of the cap & lid, which I wipe and clean first

This will keep expensive specialist adhesives for several years, instead of the several month/use shelf life they tend to have otherwise