Hello everyone. I’m heading here because of an issue I’m having with My Series I. At present, when I fill up the drivers side fuel tank it empties into the right tank. I have had issues with it overflowing the right tank and I am hoping that those in the know would be able to provide some advice on what steps to take. Thanks in advance

In a S1 XJ6 the only device stopping the left and right tanks from being open to each other as you describe is the internal check valves in the SU (or SU style) fuel pumps that only allow fuel to go out towards the carbs. Sounds like something is going on with the right side pump check valve. It could also be that a PO changed the right pump to an aftermarket style that has no check valve inside.

Could also have the in and out ports connected backwards on the right pump as well I suppose… Regardless suspect and check the right pump.

**
Do you have submerged or external pumps, Nick…?

As Mike says, check valves prevents cross feeding. A carb pump is supposed to stop pumping as the carbs needle valves close, increasing pressure. With a failed check valve the pump will continue running into the ‘wrong’ tank…

Remedial action depends on your set-up…

And welcome on board!

Do you have submerged or external pumps, Nick…?

Hi Frank. A 72 S1 XJ6 as the OP described wouldn’t have submerged pumps. Just twin regular SU’s in the covered area behind the spare tire.

the original setup of early carbed cars is quite simple: each tank is connected with one fuel pump “in” and both fuel pumps’ “outs” lead to a “T” in the centre of the trunk containing the valve Mike wrote about. It’s a bit strange though that both parts catalogues for SI and SII cars don’t show any valve, but only a tee pipe C.33901. 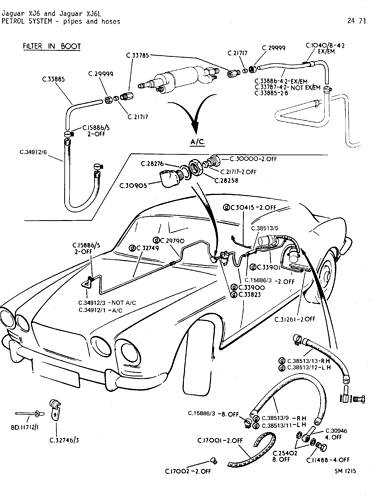 grafik2316×3085 174 KB
The early SII setup should be quite similar and the parts catalogue puts it better on display: 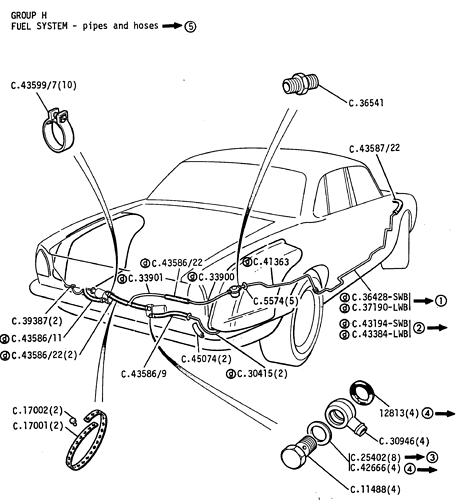 In my (limited) experience there always seems to be some sort of seepage, though certainly not leading to the kind of overflowing you describe (which is physically impossible unless the car is parked in an incline).

Just as you’re talking about that overflowing and in order to make sure as during 50+ years strange things may have happened, I dare to ask whether your engine setup is still original.

Someone may have put both tanks together and put (only) one fuel pump (what a waste anyhow;-) behind the T.

Maybe old and rusty fuel tanks and a worn out engine may even have been swapped for a nice working FI setup from a later SIII car. In this case there has to be a return valve co-ordinating the fuel returned with the tank chosen for supply. If this valve is stuck or otherwise not functioning the fuel return may cause a forced induction of unused fuel to the wrong tank and overflowing. Maybe - looking deeper into the crystal ball - the PO switching to the SIII setup chose to omit the return valve thinking he’d never fill both tanks …

it’s a bit strange as both parts catalogues for SI and SII cars don’t show any valve, but only a tee pipe C.33901. Maybe on early cars the cross feeding was avoided by the fuel pumps serving as one-way valves

Hi Jochen, Series 1 XJ6’s have no external valves. The fuel pumps have internal check valves - it’s the nature of these SU pumps. Given the OP’s description of the symptoms and his car it is most likely a problem with the right pump. If the car’s fuel system has been severely modified then we definitely need more info to diagnose

that was my initial idea as well; it’s just that in my trunk there is a quite massive brass “T” that looks original, but you would expect it to be flagged out separately in the parts catalogue as it is clamped on. 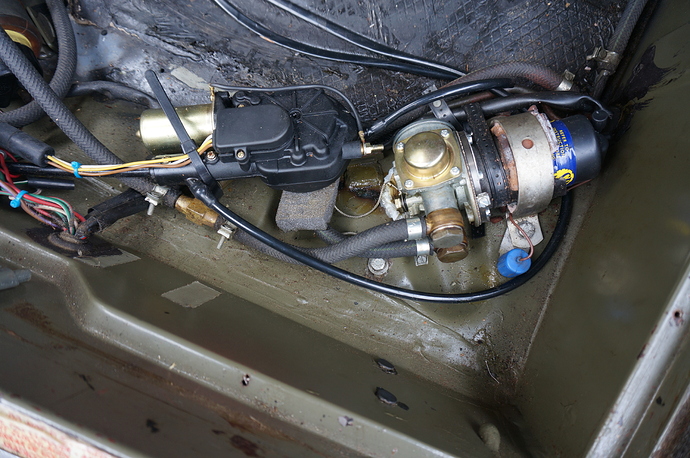 Given the OP’s description of the symptoms and his car it is most likely a problem with the right pump.

**
Nor does he state whether selecting the other tank eliminates over- or crossflow, Mike…

The Pumps in the car are brand new and installed . They are the original spec SU pumps. Could it be that the hoses are backwards? Is this why the right tank is taking fuel from the left tank?
Nick

I wouldn’t worry too much about getting the left/right to match the switch, you can easily swop over power leads. It does sound like a check valve issue and if they’re new pumps they may have a fault or a bit of contamination stopping seating.

If its any consolation I am also having fuel pump issues with my S1. My tacho went to full deflection and RH pump stopped. Tacho now working OK but there’s something very wrong with that pump circuit. 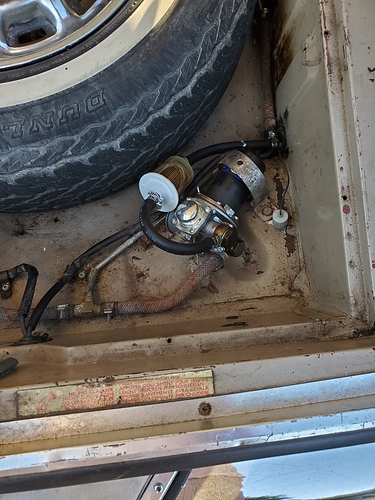 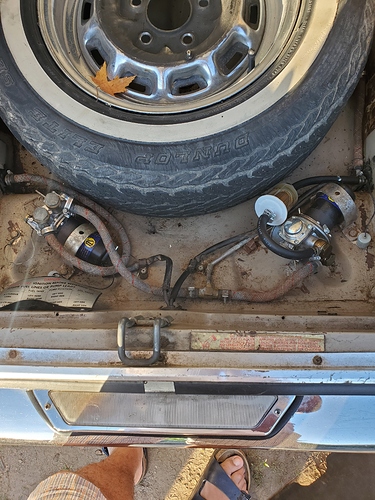 Looks to me like the right hand side one has swapped the inlet and outlet connections. They are not the same on both pumps, but rather mirrored. The pumps are exactly the same, not handed, so the connections should be identical. This would indicate the solution to the priblem is very easy.

The ‘in’ (from tank) and ‘out’ (to carbs) should really be marked - have you checked? Running the ‘right’ pump; fuel will not be delivered to the carbs with the ‘wrong’ hose connections - unless ‘right’ pump polarity is also reversed (which is not a solution)…

To add; if the problem is the ‘right’ hand pump’s non-return valve; the engine will run OK with ‘right’ selected - and the polarity is correct…

Only, the pumps are brand new and the correct type, so it’s reasonable to assume they are the same (as original). They just look a little different on the photo, as they are turned 90 degrees longitudinally compared to each other.

Both pumps are identical. I did not install them, but see that the inlet and outlet are reversed. will change today. I’m thinking this is my main issue.

And put a inlet filter in the other pump as well.