I live in California and must get Smog Checks done every two years in order to renew our registrations. I took my wife’s 1990 XJ-S convertible (5.3L V12 w/ Marelli ignition) in for its Smog Check yesterday and for the ninth consecutive time it passed with excellent results. 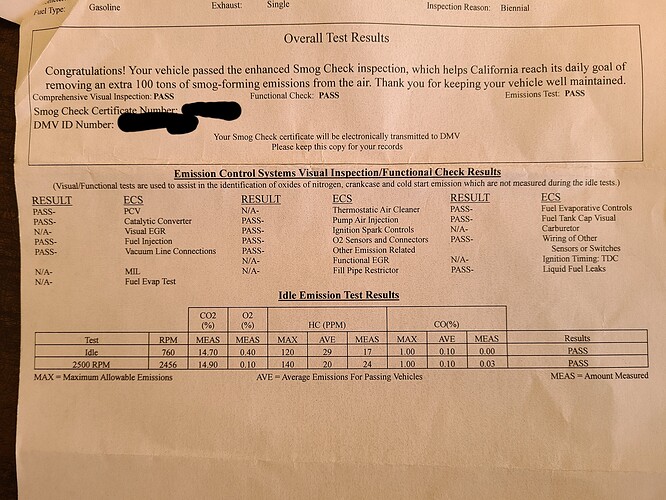 I purchased this car in January 2005 from a used car lot in Phoenix, AZ with 62K miles on it. Unfortunately, it failed CA Smog Check at the Gross Polluter level when I got it home. It had suffered a Marelli meltdown under prior ownership with the two right side catalytic converters melted and destroyed internally. The catalyst debris was in the right side mufflers. I removed and replaced the failed right side catalytic converters myself along with plugs, wires, distributor cap and rotor, belts, hoses, etc. Then in July 2005 it passed the CA Smog Check for the first of nine consecutive passes with excellent results. The technician yesterday remarked about how low the emissions were for a 30 year old car with 133K miles.

Do they test both exhaust sides or just one?

Greg,
I believe that they are supposed to test both exhaust pipes. I did not watch to see if he did test both tail pipes. I noticed that the report says “single” for the exhaust type instead of “dual”. But since the car passed so nicely I did not bring this up to the technicians attention.

I’ll be taking my 90 XJS convertible in for smog check this week also. I’ve had similar problems and have done similar repairs and more and this car also passes with excellent results. These cars do run very clean when properly tuned.

I believe that the test is done on 1 side only otherwise they would have to run the test twice.

David,
Testing just one tail pipe for emissions gases in a dual exhaust car does make some sense. I wondered about that but I never asked. It would be interesting to have the gas analysis results from both tail pipes on the same V12 car at the exact same time for comparison purposes. But that is not something that I am likely to do.

Paul, I will ask about that. I think I’ll go in today if not to crowded. Dave

So technically, you could be having a Marelli melt down on one side, but if they’re testing the other bank, you’ll pass?

In AZ they have a “Y” adapter that they put over both tailpipes that merges into the single hose that goes to the test system.

I see your car emits 0.0 pct CO at idle. Several of mine do the same

Always assumed that the AZ equipment was maybe not as sensitive as the CA equipment (since CA more strict) but that doesn’t seem to true at least in this case. 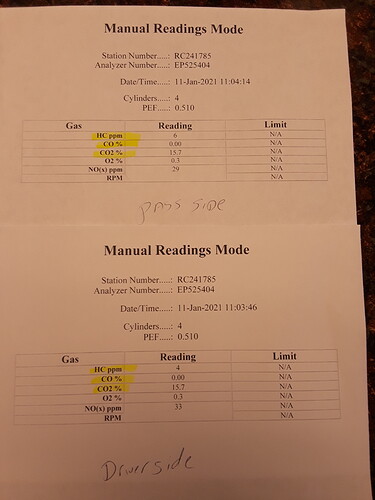 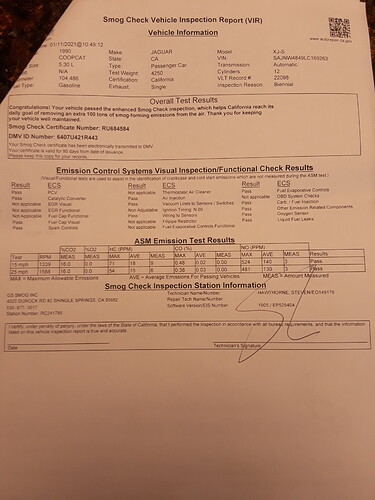 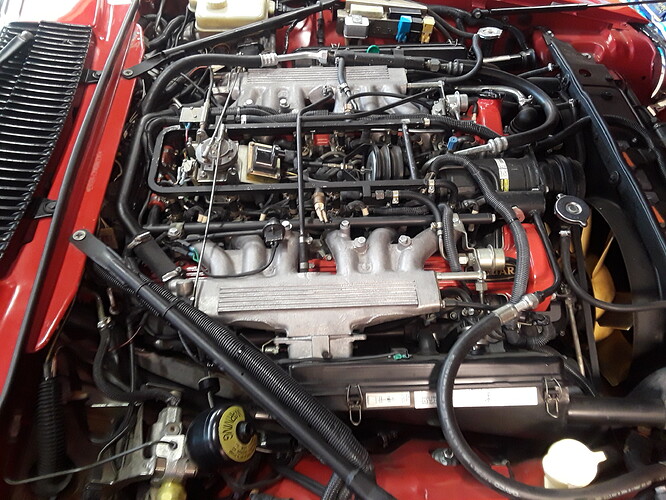 David,
Congratulations on your very good Smog Check gas emissions test numbers.
What I find interesting is that we both live in California, have 1990 XJ-Ss with 5.3L V12s, and yet they were tested to different standards by CA certified Smog Inspection Stations. Your car was run at 15 and 25 MPH and our car was tested stationary at idle and at 2500 RPMs. Because they were tested differently the MAX and AVE numbers were also different. Your car was tested for NOX and ours wasn’t.
Our test station is equipped to test the rear wheels at speed and our Jaguars, including this one, have been tested on it before. But not this time.
I have observed before that the CA Smog Checks can vary by location. I am sure this all makes sense to someone. But we passed another CA Smog test and I am satisfied with that.
Thanks for sharing your CA Smog Check results.

Is it possible that since you frequent the same inspection station and your car has passed with no problems consistently they have have that info on file therefor didn’t check as stringently.

Thanks Paul. It is strange that the tests are different in the same state. I wonder if it’s a county thing. I’m in El Dorado county. Keep-em-tuned and they’ll last a long time! Dave.

Wayne,
I have no explanation why the standards for CA Smog Checks for nearly identical cars within the same week but at different stations were different. But if you are looking for logic, California is the wrong place for that.

We plan to make our exodus from California this summer, along with an estimated 150,000+ others who no longer want to make this state their home. I suspect that this was our last CA Smog Check and I am glad of that.

Ha, you want to see the XJ-S I found? This is the last smog check by the PO. CO% 12.86! The next smog check a few months later was 12.75%. So I guess he gave up, sold the car, and it sat in storage for about 6 years before I bought it. Ended up being ECU problem, plus the engine needed a LOT of TLC. 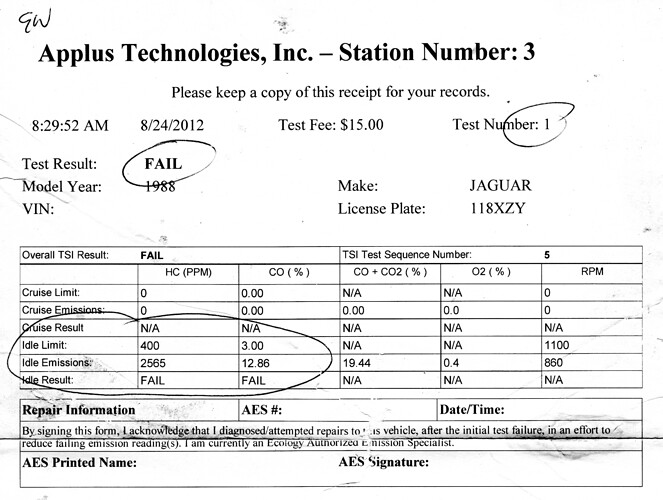 It is strange that the tests are different in the same state.

When we had vehicle inspections here in Florida, each testing facility had its own equipment and hence its own procedures.

One example: The main testing facility in WPB had a platform for testing brakes. The car was driven (by the official, not by the owner) onto the platform and the brakes applied. The braking force from each wheel would raise red fluid in four tubes. The inspector would note the levels and pass or fail the car accordingly. Then the car was driven off the platform, and it leaving would cause the red fluids to drain out of the tubes, ready for the next car.

So my friend had a Lotus Europa that weighed 1100 pounds. When driven onto that platform and stopped, the red fluids would barely move – it doesn’t take much to stop 1100 pounds. Then a couple of them would drain right back down – the car didn’t weigh enough to keep the fluid from draining. Yes, the idiot inspector flunked him.

So he drove the car to the next county where the inspection station didn’t have such a fancy brake tester. They just drove the car up to 5 mph and stomped the brakes. If all four wheels locked up, you pass. Got his sticker and was outta there.