Is there more than one fuse (30A near the relays) in the convertible top circuit? My top will not go up and the rear windows are not operating.

TEF,
Do you have the owners manual for your car? The info about the 30A fuse is on pages 191 and 223. It is the only fuse in the convertible top system. Do you know that in order to operate the convertible top and rear windows the transmission must be in Park or Neutral, and the Parking Brake (hand brake) must be on. This is on page 73.

Please don’t hate me for this…

Instead of rebuilding the rams that were leaking, the PO disconnected them. The rear quarter windows wouldn’t go down. The top was now manual.

I disconnected the controller for the top and jumped the input wires from the switch to the left and right connection points on the controller connector. Now my Roof switch operates both quarter window whenever I like…no park, no handbrake.

I didn’t cut any of the existing harness in the trunk. I simply jumped the connections.

If you followed the above post and still have no luck, test the pins on the roof controller connector in the trunk.

Thank you for responding.

I have no power to the 30A fuse for the convertible top. I would like to circumvent the shifter switch and keep the parking brake switch (which is working).

Can you tell me which wires I would need to splice? Inside or outside the ECM box? I am not real good at diagnosing electrics.

You most probably need to become familiar with a little bit of your car’s electronic diagnosis…meaning learn the necessary tricks for your car at a minimum.

Start with the obvious problem. You need to get a meter. You can get a cheap one or a nice one, up to you, but get one that has a tone signal for ohms (continuity).Test it on known working circuits to see how it works. The obvious problem would be no power at 30a fuse. Take the fuse out and test both sides of the fuse terminal for DC voltage (one side of the meter to a terminal and one side to ground (the battery is right there)). That will verify power to the fuse at least, and lets all hope you have that.

Also, if you’re flexible, you can test the fuse in place. On the back of the fuse should be two open points to test from. Do the same continuity test set to ohms, or test voltage (DC) on either side of the fuse (one point to fuse, one point to ground).

Ok. Basics out of the way. Anytime you want to remove a switch in a circuit, you have to find out how it operates. Does it close the circuit to function, open the circuit, or use resistance? Your temp sensors under the hood use resistance. Think of it as a switch that allows so much or so little voltage through to tell something else what to do.

Now! I would be careful about circumventing the shifter switch, or at least the one at the shifter, as I would be willing to bet it does more than tell the top it’s ok to open. Do some digging online and find the wiring diagram for the roof controller in the trunk. You may be able to bypass what you’re looking for there. To be honest, it will probably bypass both shifter and handbrake safeties (I’d go this route).

Just be careful and take pictures of what you do change up (especially near the shifter).

I swapped the two center relays with a new one. No change.

I installed a new Roof switch in the console. Nope.

I disconnected the connector to the ECM and tested the individual wires (with a light). Only the white and green are showing power. I do have have an ohm meter. But I am sure the problem is in the switch because the quarter windows are not working either.

The side windows work fine.

I had a similar problem about 4 years ago. Then it was a simple matter of replacing the relays. Now there is now power to the relays #30. I remember another Forum member advised me to jump the wires. He did it with a paper clip.

I might just take it to a shop. I dread spending hours chasing this down. And I am having a new top installed next week.

You can jump the wires on the relay. That would tell you if your 30A fuse is working. Start with the power to that fuse. The quarter windows won’t activate unless the controller tells it to. You can jump those relays to test function too.

If you have somebody you really trust, you can bring the car to them. BUT, this is a diagnosis problem, which can either cost a lot, or you may have some new cut and splices done where they shouldn’t be.

If you don’t want to test the 30A fuse, jump the relays. Check the wiring diagram to make sure you jump the right ones. Buy a cheap set of crimpers and connectors and some #12 wire. Or you can use a paperclip. It’s nice to have a good jumper on hand (keep in the car) for when something happens on the road and you need things to work.

It could be the controller.
Honestly…
Test the fuse…if good
Jump the relays to test operation (disconnect the roof controller in the trunk next to roof pump)
This will tell you a lot about the problem

There should be power to the window relays and not the top relays.
Here’s the diagram: 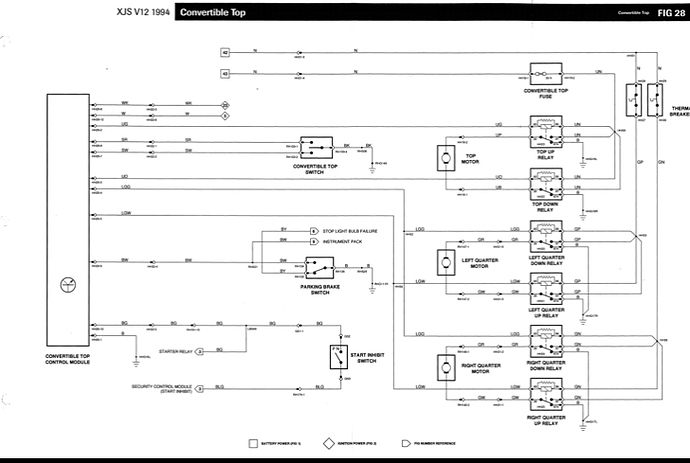 I took it to a neighborhood mechanic who services it for me. Just down the road from here.

He found the problem in the trunk and fixed it.

Thank you very much for your time and help.

Would it be possible to report the diagnosis and the action taken?

This info will benefit others in the future.

Sure.
I thought we were already doing it.

The action the mechanic took to remedy the problem is what I was getting at. Thanks

Glad you got it fixed! I am a little jealous of your soon to be new roof! Mine has a leak. I think it’s the seals. When I get the time, I want to engineer a hard top convertible version. I hate to chop up the existing structure though.

As a consequence of all this aftermarket work, there is an additional 30A fuse in the trunk which is piggybacked on the top circuit. Cannot discern why

My trunk has a spider’s web of wires around the battery. That is where the mice chewed a fat white wire which has the second 30A fuse in line.

BTW, the CD deck is gone. Bumps made it skip. And the bazooka is faulty.

Not pretty. But it works and I am not a purist. I am leaving it alone.