My '87 XJ6 just failed California Smog due to O2 – the technician was very helpful and we identified a substantial enough vacuum leak that is the likely cause.

1.) Picture #1: The vacuum port (I covered it with a cap)
2.) Picture #2: The hose that was attached to that port, with the opposite end wide open creating the leak.

I’ve looked in the manual and have measured everywhere this hose could feasibly get connected to no avail. Realistically, the car will now pass smog with the vacuum leak sealed by the cap, but since it had the hose attached during the test, the inspector is going to demand that the hose be back attached SOMEWHERE.

Can anyone help me figure out where the vacuum hose goes? I’d be very grateful. 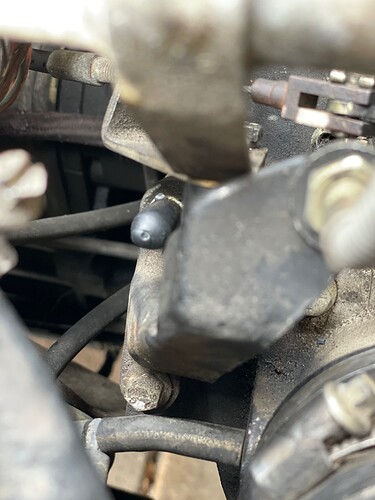 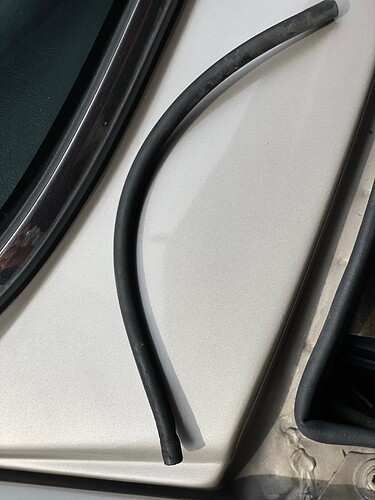 Connected to hardline which runs to the other side of the engine to another hose to the cruise control bellows. What color is your car? Looks very close to my Talisman Silver. 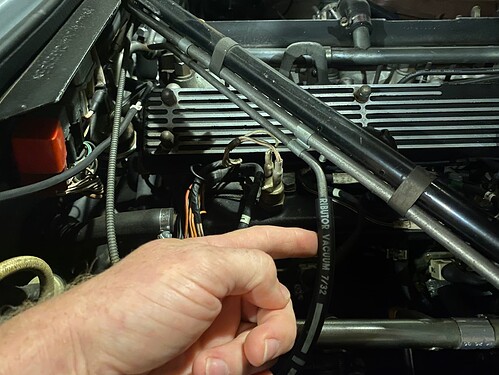 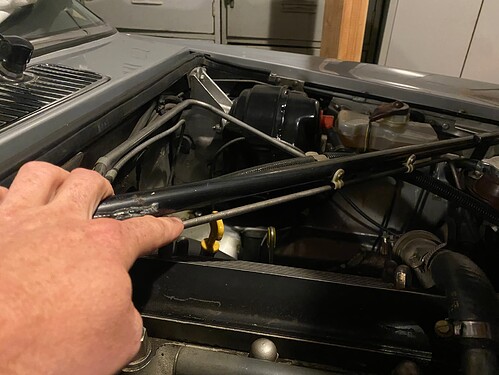 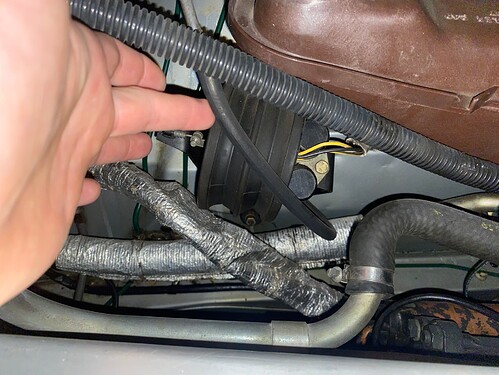 THANK YOU very much for the thorough example with pictures! Much appreciated. I plugged the port with a vacuum cap to seal it to see about re-trying a smog check.

As an update, I went back to the smog shop and it’s still running far too rich; even more so than a vacuum leak could cause. Everything else on the car is new-- plugs, wires, cap and rotor, coil, O2 sensor, and rebuilt injectors.

I’ve got to narrow what’s left: The cold start injector could be malfunctioning and remaining on, or possibly the Mass Air Flow meter is maladjusted.

Any opinions welcome. And thanks again for your reply.

And your question: My Jaguar is “Silver Birch.” It’s really a great color and one I’ve not seen much.

So it idles well and drives well but fails smog?
I don’t know the lambda equipped cars but if one cylinder misfires you get more O2 and the ECU fattens the mixture. Leaking injectors are a possibility.

If the smog test fails at idle, there may in fact be a misadjusted AFM if the system operates in open loop (no lambda control) at idle. You could make changes to the small bypass screw in the AFM to make it run leaner if that’s the only thing that fails the test and it really runs in open loop at idle.

My '87 XJ6 just failed California Smog due to O2

**
That must be CO, Brian - carbon monoxide…right…? Never heard testing of O2, which is pure oxygen - though California has some ‘funny’ rules…

What is your reading and what is the maximum allowed?

still running far too rich; even more so than a vacuum leak could cause

A vacuum leak usually cause the engine to run lean, not fat. David has a point with the O2 sensor; it fattens a lean and leans a fat mixture.

Other suspects; the CSI ‘leaking’ will cause fat running. So will excessive fuel pressure, failed fuel pressure regulator - and on the fuel pressure regulator. Also, disconnect vacuum line and check if fuel is leaking out - if so, this is drawn into the engine, fattening the mixture. A failed, maladjusted, AFM will certainly cause mixture problems - the bypass screw is used to regulate mixture, but has limited range.

Properly set up, the xk should pass most emission test even without the cats, but the ‘deeper’ way of pursuing a ‘fail’ is to run tests with a broadband gas analyzer in conjunction with various tests. Just ‘doing something’, then take the car to a testing stations repeatedly is somewhat hit and miss - adjustments really needs continuous feedback from a cooperating agency…

Thanks for catching the error. Yes, “CO2.” Here are the copies of the reports: 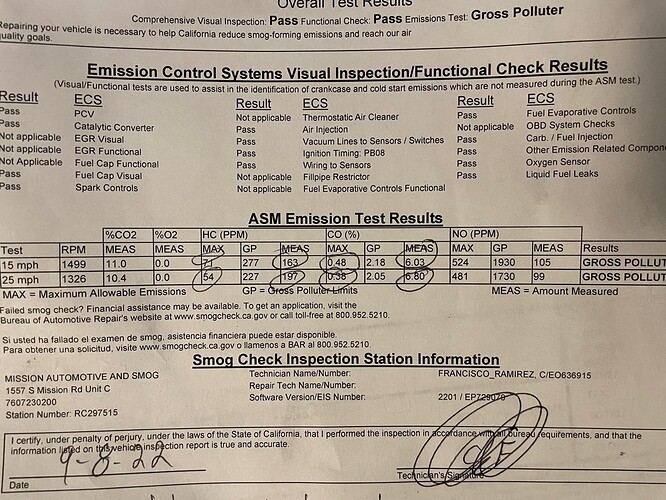 The Max vs. “measured” are so far distant that it is really running richly. I hadn’t considered the Fuel Pressure Regulator – those are inexpensive and easy to replace. Unfortunately, sourcing a new Cold Start Injector is difficult and expensive – it may be prudent to remove mine and test it.

But yes, I agree that picking one component at a time and then bringing it back to the shop for emissions analysis is asking a lot of my smog shop.

Any other ideas after seeing these readings?

As always, much obliged for your expert opinions.

HC is unburned fuel, CO is not completely burned fuel; that means not enough oxygen for complete combustion.
Points to an overly rich mixture, either because the engine runs too rich or because you have a misfire and the ECU compensates by adding more fuel (it sees a lot of O2 and decides the engine runs lean, while it actually runs rich but has a misfire that doesn’t burn the oxygen in that cylinder). Easiest fix is to move to a different state. Other ideas:

Block the line to the cold start injector, it’s not important. Unplug one injector at a time while running and see what change you get. Look at the spark plugs. Is one different? Why?
Maybe some E85 helps with smog but read up on it first.

Any other ideas after seeing these readings?

**
It is indeed gross, Brian - likely far more than a simple adjustment problem.

As David says; clamp the hose to the CSI - it will stop fuel passing through the injector, no matter what. Also check if the the fuel pressure regulator leaks fuel out of its vacuum port. Both, if faulty, will add fuel - amount depending on fault extent…

Further, whenever a fuel fault is suspected; the O2 sensor must(!) be disconnected - any adjustments will be negated by the Lambda system. The Lambda is not necessary for running the engine, it is just a mixture refinement. The engine management systems, properly set up and functioning, will run the engine at similar emission levels.

However, the recommended adjustment is 05 - 1,0 % CO, but the Lambda will also counter some fuel ‘imperfections’. Bearing in mind that the Lambda corrections are only present with steady throttle/speed - which seems to be the case for the Californian test regime.

Having eliminated the obvious; fuel pressure (must(!) be checked) and eventual CSI and regulator leaks; it gets a bit complicated - and some repeated analyser help will likely be called for…

As an aside, the xk engine’s capacity to swallow fuel without impeding performance is legendary - but with the slightest lean it will misbehave…

The Max vs. “measured” are so far distant that it is really running richly. I hadn’t considered the Fuel Pressure Regulator – those are inexpensive and easy to replace. Unfortunately, sourcing a new Cold Start Injector is difficult and expensive –

The typical failure for a cold start valve is they get clogged up and don’t open. I would put it way down on the possibility list. Check ohms reading on your CTS (coolant temperature sensor)…also check its wiring all the way back to the ECU and also the connector that plugs into the CTS. May need to open up its plastic cover to reveal hidden/broken wiring or corroded contacts. SD Faircloth Jaguar Fuel Injector Service

Check ohms reading on your CTS (coolant temperature sensor)…also check its wiring all the way back to the ECU and also the connector that plugs into the CTS. May need to open up its plastic cover to reveal hidden/broken wiring or corroded contacts.

What made me suspect an ‘external’ leak into the manifold was that the Lambda/O2 sensor seemingly did nothing to correct it. It may have some upper limit for correction, but inherently it can only correct for ECU induced fuel delivery. While a grossly leaking injector may exceed the Lambda capacity, an ‘external’ fuel delivery will continue even if the ECU reduces fuel delivery to ‘nothing’…

I trust the Californian test regime runs the engine fully hot - though of course, a failed CTS may grossly overfuel when hot, though I would suspect that a hot engine would misbehave with the CTS failed ‘cold’ or were disconnected…?

though I would suspect that a hot engine would misbehave with the CTS failed ‘cold’ or were disconnected…?

The ECU can only interpret an ohm reading, or lack thereof, from the CTS, thru its wiring and connector. Anything that causes the ohm reading at the ECU to be “off” in the CTS circuit, will cause an increase or decrease in fuel delivery. Those “anything” items being the CTS itself, its wiring or its connector. A break in the wiring, or a disconnected connector will give a zero ohm reading at the ECU and one would assume the ECU goes to max mode…whatever the max may be that is in the tables. Any other “shift” in the ohm value received at the ECU will cause fueling to “shift” based upon the ohm reading received. SD

If the more likely possibilities don’t pan out it might be worth taking a peek at the cannister purge system.

As a last resort, even though it’s a’pita’ to get to, a possible leak in the hose which runs from the AAV to the intake manifold, could reveal on close examination to be a factor as well.

Thanks so much for all of the suggestions:

Here’s the progress so far:

1.) Removed the vacuum line from the fuel pressure regulator to check for fuel – nothing.
2.) I removed the injectors one by one to listen to the engine. Upon doing each one, it’s evident that each cylinder is receiving fuel and igniting it as the engine ran rougher upon unplugging. As such, my guess is the ignition and fuel delivery system is working fine.
3.) I looked over the rest of the engine for any additional vacuum leaks and found nothing.

This is going to be a puzzle.

1.) Removed the vacuum line from the fuel pressure regulator to check for fuel – nothing.

Which proves that the regulator isn’t leaking but tells us nothing about fuel pressure. A fuel pressure test is a must, as Frank mentioned earlier.

Or…replace the regulator as a guess, which might be less costly than buying a fuel pressure gauge if you don’t have one

Any other “shift” in the ohm value received at the ECU will cause fueling to “shift” based upon the ohm reading received. SD

**
What I meant was that the Lambda/02 should then at least try and correct the mixture during the test, Faircloth. It’s why it is there - though its capacity to do so is ‘unknown’… 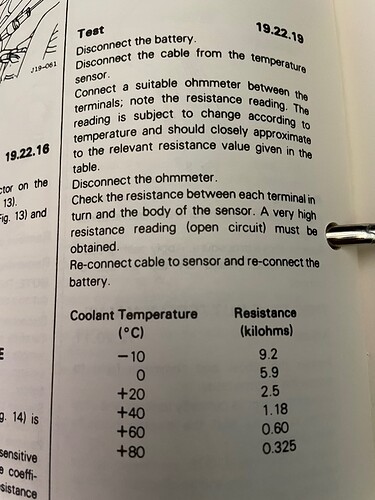 1.) I performed a test on the ECU Temperature sender: At engine cold I got a reading of 1.1. With the engine fully hot I got 0.8. Not much of a spread there, and certainly outside the parameters of the shop manual’s specs.

I ordered a new sender/sensor from Rock Auto and threw in a fuel rail pressure regulator for good measure. With the addition of these two items, I’m curious to see how the engine behaves.

Someone correctly noted that these engines don’t seem to mind being run rich – even obscenely so, per my HC and CO2 readings.

I want to thank everyone again for the ideas and assistance here. Maintaining a classic in California with our onerous smog regulations is not for the faint of heart!

Not much of a spread there, and certainly outside the parameters of the shop manual’s specs.

**
It sure is faulty, Brian, but the CTS’s ‘hot’ reading doesn’t fully explain the excessive emission test’s readings…?

And nother idea. a dirty air cleaner. been there, done that.

Vacumn leak? teh bellowsd for the cruise control

Under the intke are taps for vacumn. and one spgot that should have a cap. to drain the intake?

Ae, the engine must be hot. priamarioy so the cats are at work. but, also so no enrihment system is at work