My 1994MY XJ40 started out 12 yrs ago with no A/C due to a holed condenser. After repairing the condenser, I purchased a new reciever/dryer, some PAG oil, a vacuum pump/set of manifold gauges and some R134A. A/C worked again.
I’ve refilled the system one more time since doing the original work, but
last week it was not blowing cold anymore so I thought I’d try topping it off instead of starting with an empty system.
The R134A temperature & pressure chart is a definite must if you need to top off the system and I wouldn’t attempt “topping off” without a set of manifold gauges to read the hi and lo side pressures.

In Canada, it’s getting more difficult to source R134A unless you travel to the States to buy it. Eventually however, it’ll be phased out in the USA too. I tried importing a case from eBay last week and it got sent back as restricted cargo, so I started thinking about alternate solutions.

After some research into using “duster” (R152A; diflouroethane CAC 75-37-6) as a refrigerant, it seems that not only is it fully compatible with R134A (incl. seals and lubricants) but that you need less of it and it cools more efficiently PLUS has far less environmental impact than R134A. It can also be mixed with R134A in an existing system with no problem too.

Cautiously unwilling to experiment with R152A on my prized Jag, I thought my old Ford Explorer would be a good candidate for a test, so today I gave it a shot.
The explorer A/C called for 32oz of R134A. To get the amount of R152A needed, you multiply by 0.64,- so a full charge of R152A in the explorer would be 32 x 0.64 = 20.8oz. I had about a can and a half (~16oz?) of duster around. Today was Canada Day and everywhere was closed so I couldn’t buy any more.

Anyway, I hooked up the gauges and started the car.
The system pressure was down to about 10 on the low side, so it had some R134A in there - but not enough to start the compressor.

No matter, R152A and R134A are fully compatible with each other so I just thought I’d pop some in there to see if things improved. The ambient temp today was about 80°f so my target pressures in straight R134A would have been 40-50psi on the low side and 175-210psi on the high side. The rule of thumb when using R152A in an R134a system is to reduce the psi figures by 10% for a given temperature range, so if I was running straight R152A in 80°f ambient, ideally my readings should be 36-45psi low side and 158-189psi hi side.

Of course after adding R152A to the system I’d be running a mix of the two, so I set my target about 1/2 way between the two ranges - 38-47psi low and about 164-200psi high. I think I put in roughly 16ozs (10oz can plus about half a 12oz) before I ran out of refrigerant. As luck would have it, this amount of R152A “duster” got the readings very close to my target pressures and gave me about 35°f at the centre vent. That’s colder than the R134A by a couple of degrees, so a great result.

So, that’s the experiment. Using the cheap and widely available R152A “duster” with the conversion formulas above will give you very cold temps. The stuff can be used in R12 systems too, but of course you have to prep the system as if you were converting to R134A (PAG oil etc).
I hear that R152A in an R12 system can even make ice cubes!

Thanks for that! I hadn’t even known that R134 was on its way out, so good information to know.

R12 was available in the great USA long after it was not in Canada. My bet is the same is happening now with R134. That is assuming you wanted to be gouged to buy in Canada in the first place.

Took a spin on the highway, getting even colder 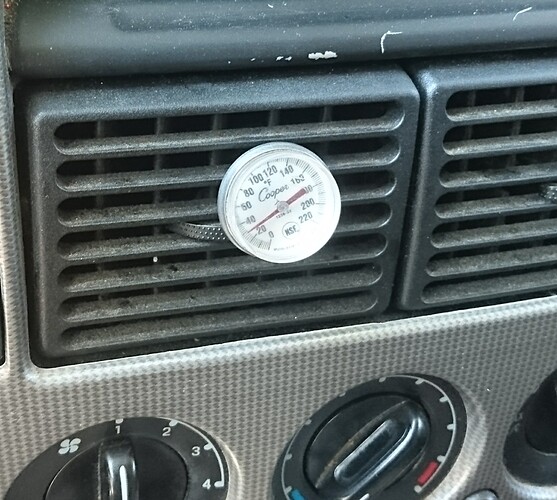 Interesting info on R152A. My 1990 XJ6 was dealer converted to R134 about 13 years ago. Noted a decrease in cooling ability so perhaps a second update to R152A would improve that. It’s just OK for mild Eugene Oregon but would not be so in Arizona or Palm Springs. Would like to hear more about R12 XJ40s that have been changed to R152A.

Apparently the component structure condenser size etc of an R12 system does extremely well with R152A, but best to check that out yourself.

This is an example formula I found for a Chevy S10 R12 system, hopefully it clarifies the amount you would need in a non-factory R134a XJ40 (R12) system.

So theoretically 33F would be the coldest you could achieve without the system icing up. Couple this with probably a 2 to 3 degree temperature rise in the cooled air from when it leaves the evaporator fins to when it actually travels out of the various vents.

So 29 degrees, I’d get a second opinion

example formula I found for a Chevy S10 R12 system, hopefully it clarifies the amount you would need

I can get close with the calculation but not quite there…am I off base with this logic:

Could be that some numbers got rounded up or down too, to be ABSOLUTELY sure, check the molecular weights and go from there if I were you!

Hey it feels nice and cold on a half-hour trip, IDK about reduced efficiency, maybe that takes more than 1/2 hr?

Great info Larry, I had no idea R134a was being phased out let alone the replacement R152a is better and can even be mixed without any mods.

You should NEVER mix refrigerants they dont react the same when mixed, if you have to remove most of the old stuff maybe to 1psi then add the new.

You should NEVER mix refrigerants they dont react the same when mixed, if you have to remove most of the old stuff maybe to 1psi then add the new.

Well in the case of R152A vs. R134A that is not the case. They are 100% compatible and can be combined with no ill effects, on the contrary, the mixture is beneficial if you consider cooling efficiency and compatibility with seals.
My own vehicle proves that, not that it needed to be proven, I thoroughly researched the subject and suggest you do your own research on R152A. It isn’t miscible with the old R12 freon though, or the compressor lubricant in an R12 system - so just R134A systems unless the R12 system is prepped for an R134A conversion.

So how much cooling efficiency is really gained from changing from a converted system now running R134 and doing yet another conversion to R152? ( 75,000 mile 1990 XJ6)

It’s mainly used (in my case, Canada) because my last two shipments of R134A have been stopped at the border. So I can’t get R134A any longer. It is slowly being phased out everywhere although you can still get it stateside for the time being.
Although there are other plusses, off the top of my head the main advantages of R152A over R134A are 1/10th of the environmental impact, better cooling and less quantity reqd. No conversion is reqd for a system already running R134A, totally compatible.

R152A will work well in your car as far as I can tell. The reason it is not in widespread use is because it is classified as a flammable refrigerant and when it does burn it makes hydrogen fluoride which is not real good for the environment.

In theory you should need 63% of the original charge and see up to 10% increase in COP meaning fuel savings.

It has been around for a while now.

Yes I know all that Matthew. Although it is classed as “flammable”, It doesn’t burn very readily - in fact, spraying some across my map gas torch tends to put the flame out.
My other car, now filled with a mixture of R134A and R152A blows ice cubes. I used the 64% rule and 10% reduction in pressure readings to determine correct charge. I’m using it in all my vehicles from here on out.

Oh and of course “released” R152A is 14 times less detrimental to the environment than R134A.

You should see some of the tests they do when judging flammability. You can literally walk faster than the speed of the flame propagating across the room.

You should see some of the tests they do when judging flammability.

I suppose everyone knows that R12 was kicked out because of its potent contribution to ozone depletion. That problem was solved by replacing it with R134A. Both are non-flammable, which is desired. But despite success in solving the ozone crisis, a new form of pollution is upon us–release of agents into the atmosphere that enhance the “greenhouse effect” and thereby cause global warming. CO2 is what we hear about most, but other molecules are far more potent. For example, arbitrarily assigning CO2 a “global warming potential” (GWP) of exactly 1.0, CH4 (methane or natural gas) is far worse (GWP, 28). R12 is 10,200, so it would be kicked out even if it hadn’t already been an ozone depleter. But its replacement R134a isn’t great either–1,410. So it had to go too. Propane and butane have very low GWP (1-4) so they would be ideal (plus they work well as refrigerants). But they are flammable. Two large companies, Dupont and Honeywell, (who had patented R12 as “Freon” years ago) argued that what was needed is a refrigerant that has low GWP AND is non-flammable. And, of course pricey since they would develop and patent it. Their answer was R-1234yf which has an impressive GWP of less than 1. It was adopted by some European marques around 2010 and for the last few years has been required (I think) in all American marques too. Since then, however, it’s been shown to be flammable, something that was suspected but denied earlier. R152A’s GWP is 124 BTW, so more than 10 times better than R134a. Sounds good to me. All these GWPs are only relevant if the stuff leaks out of course, or isn’t properly recovered during system repair.