I have been researching the archives and aside from the A/F reader actually seen in Mike Goodwin’s glovebox, I am contemplating ditching the factory clock and filling the hole with a “dual read” A/F gauge: Innovate 3891 DLG-1 Dual Digital Wideband Air Fuel Ratio Gauge AFR UEGO Kit

As the engine is coming out, sometime soon (I hope) I will have access to the exhaust system, en toto. What is latest consensus on where to weld in the bungs?

Huff, If I recall correctly bung should be at least 24" down from manifold. I installed mine just forward of mufflers . Too far or too close is no good for sensor.
I have killed a few sensors already by running too rich. On the OIL LEAK was running great until my drive home and on steep long grades was running too lean. Had pulled over a couple of times to richen mixture and now another O2 sensor is toast.
Don’t know the answer, live in fear of running too lean and destroying engine.
These carbs are not precision devices as fuel injection and getting them more consistent running is out of my area of expertise .

Hello Huff
Here is some information that came with my HKS A/F gauge:

Thanks much, Doug. Some pitch make sense for shedding moisture. Looks as though they are recommending it be on the horizontal run of the pipe instead of the vertical, to be able to have the pitch. I do want to minimize chances of the sensor failure, which I hear is quite common, as they tend to have a relatively short lifespan (I read 20K miles, or first too-lean or too-rich event), as is, so access for replacement is also key, I would think.

I fitted the WBO sensor immediately after the 2 into 1 confluence for my Megasquirt EFI projects. Space allowed me to fit the sensor vertically. I did wrap the exhaust in that area with fiberglass tape to reduce heat radiation onto the sensor.

I also fitted the gauge of the Innovate MTXL that I was using in the Kientzle clock housing (the metal part) for my '74 Jensen Interceptor. 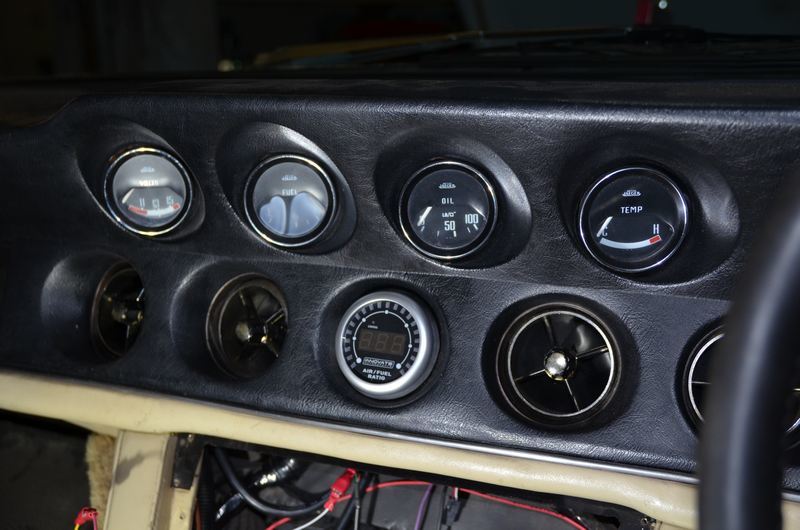 Looks good! I was contemplating the exhaust insulating wrap, as well, which sounds like a good idea to protect the sensor (Rowan and Martin’s Laugh-In would be proud, if anyone out there remembers that show and the “Where’s the censor!” bit) but will try to install two sensors, one in each pipe so as to be able have a better chance at balancing the carbs. I have yet to suss out location(s) which may dictate scope of work, though.

Have you had any sensor failures? My plan is to keep the bungs plugged until after my upcoming engine rebuild settles in a bit, and then putting the sensors in-line.

Thanks for the info.

A sensor in each of the two pipes will provide more info than just 1 for sure, but they will still report the AVERAGE fuelling of the two carbs together. If you set your WBO for the fastest response time, you should tune for the most STABLE situation first and then for desired AFR, maintaining max stability of the readings.

I’ve had many sensor failures but I also believe that my sensor failures can be ascribed to the LC-2 controllers I was using which are very sensitive to power surges during cranking. I now power them up AFTER then engine has started and cranking has ceased, and the sensors no longer fail.

Its a good idea to get your engine sorted as best as possible before fitting the WBOs. Excessive rich mixtures could damage the sensors.

Thanks Philip. Am still some months out at my current earning rate. Will post results, after. Thanks for the tips. Huff

I installed 3 “bungs”(?) so that i could measure each carburetor and adjust the mixture accordingly. I haven’t finished the project, but was told the each had to have power continuously, even it you weren’t using it in order to avoid fouling. I’m just finishing up my restoration, which also includes Ray’s EDIS.

but was told the each had to have power continuously, even it you weren’t using it in order to avoid fouling

That is correct. If a sensor is fitted it really ought to be powered while the engine is running. The Innovate Motorsports documenation states that very clearly. I did have several instances when the sensor was not powered for some reason and it seemed to have survived at least a few such instances. Better to remove the sensor if not being powered.

I have widebands fitted on my v12.

I have (or have had) them fitted at two locations:- 1/ in place of the balance pipe I have made up two plugs which have the appropriate thread and have them horizontally across the car just behind the sump, one measuring each bank of six cylinders; and, 2/ I have had the bungs welded into the downpipes which is much closer to the cylinders than position #1. I have had one sensor failure (I think due to radiant heat) in this position so would consider it “marginal” as far as long term reliability is concerned.

Your concern about exhaust gas temperature (“EGT”) is very much rpm related. I doubt you’d have a problem unless you persistently run above about 4000rpm. I have EGT sensors about 1" from the exhaust valves on all twelve cylinders and you are welcome to look at a datalog to see how hot things get at what rpm.