A New Failure to Proceed Mode

Probably most of you all know that there is a brass screen filter in the gas tank drain plug, a brass or plastic screen inside the fuel pump, and brass screens in the carb float bowl banjos.

These catch larger debris, but I have had two instances of “failure to proceed, fuel starvation” in which the culprit debris was ultra fine rust dust particles, approximately the consistency of powdered sugar.

In the first instance, about 20 years ago with the XK120, I had one of those plastic inline filters between the tank and the pump, but the fine dust rust accumulated down in the fuel tank drain plug until it blocked the pickup tube. The dust never got as far as the inline filter, which was still clean.

The second instance was a few weeks ago with the '38 SS saloon, which has the same brass screen filters as the 120, and I have cleaned the gas tank but I have not yet rigged up a paper or composite filter. The fine rust dust got through all the brass screens and accumulated down in the bottoms of the float bowls, and blocked fuel getting to the jets.

I have one of those glass bowl filters made by AC with a paper or composite element which I was going to put on the SS because it looks period correct. Those were used on millions of cars, trucks, tractors and stationary engines here. We used to call them sediment bowls. I remember as a kid helping my uncle clean his on his Allis Chalmers farm tractor. You have to mount them properly so they don’t vibrate, use the right gasket, with a rubber disc on the bottom, and don’t over-tighten them.

But I think the ultimate answer for our old cars is either sealing the inside of the gas tank with a product such as Bill Hirsch makes, or making one out of an alternate material such as stainless steel, aluminum or brass.
I’m no great shakes at TIG welding stainless or aluminum, but I can solder brass.
I’m thinking about what it would take to make a new tank for the SS out of brass.
Has anybody gone down this path before me?

Put a magnet in the tank

Great idea, I’ll see if I can find one that fits in the tank drain plug.

You could get a magnet and stick it to the outside of the tank, near the drain plug, and it would probably have the same effect.

Rob
The following is to be ignored by Concours aficionados.

A colleague suggested to me to drill and tap the tank drain plug for a 1/4 inch BSPT (or similar) steel plug, attach the magnet to that. More control when draining the tank and any detritus comes out with the plug.
Regards
David

A colleague suggested to me to drill and tap the tank drain plug for a 1/4 inch BSPT (or similar) steel plug, attach the magnet to that. More control when draining the tank and any detritus comes out with the plug.

If you copperslip the main plug, it comes out easily

@Rob_Reilly POR15 Fuel Tank sealant I have used a few times, and it works very well indeed, no trouble after 20 years

After finding sediment accumulating in SU float bowls, I put a paper filter in fuel line between fuel tank and fuel pump. No sediment in float bowls in 15 years and about 10,000 miles on Mark V since paper filter installed. I changed paper filter once when fuel starvation experienced at 40 mph steady speed followed by acceleration. New filter solved fuel flow issue.

Whilst magnets do work to capture some debris, they don’t stop the actual problem of the fuel tank disintegrating from within. I’ve used in the UK for my classic cars with steel tanks “Tank Guard Seal” (a 2 part mix you pour in and slush around the empty tank - with the tank out of the car unfortunately and all the connectors, fuel float, etc disconnected). You need to make sure the inside of the tank is fully dry. I’ve even used it on tanks with pin hole leaks and too weak to weld up - serval coats slushed around and dried off between applications and you end up with good and long lasting fix - and your original tank.

You may need to drill and tap out the tank connectors if the Tank Guard build up is too great, or bung the holes well before you make the applications.

Here are some pictures of my MK IV fuel tank before and after applications of Tank Guard Seal. As my tank had some small pin holes (and was very suspect to be welded up OK) I sealed it inside with 3 applications and outside with 2 applications - which totally solved the issue of rust and debris getting into the fuel line, and no leaks. I did use a camera probe to take some photos internally before and after:

Rust formed and lined the walls and baffles throughout the inside of the fuel tank: 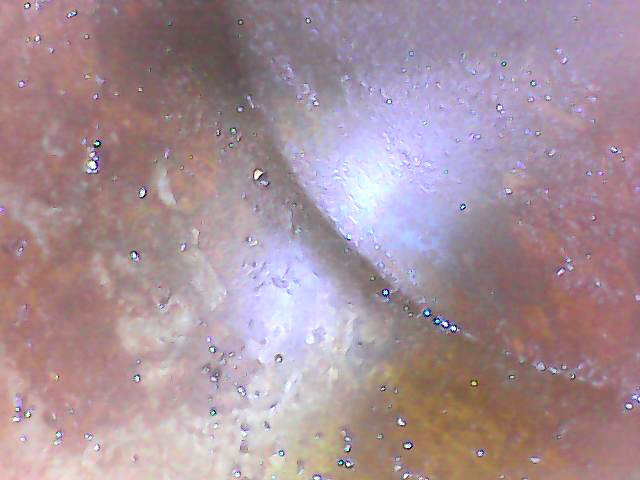 Inside after being sealed with tank slush: 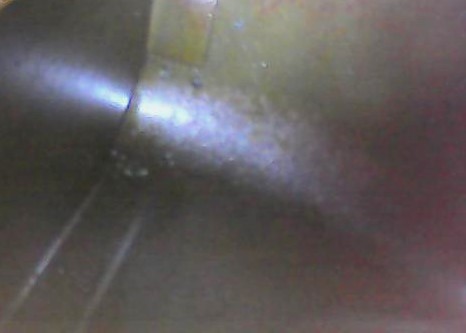 Outside also cleaned and sealed (which was a good gloss finish): 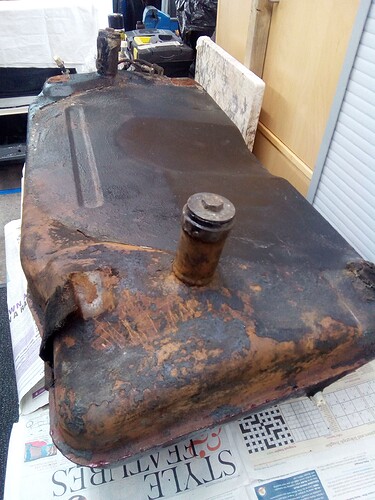 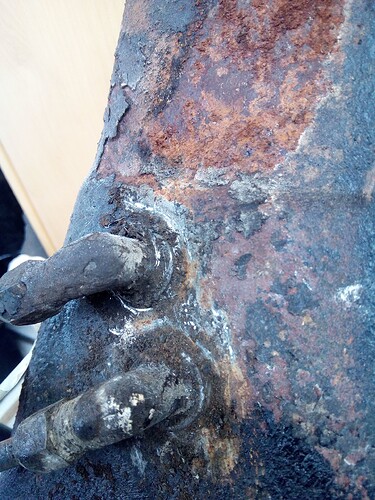 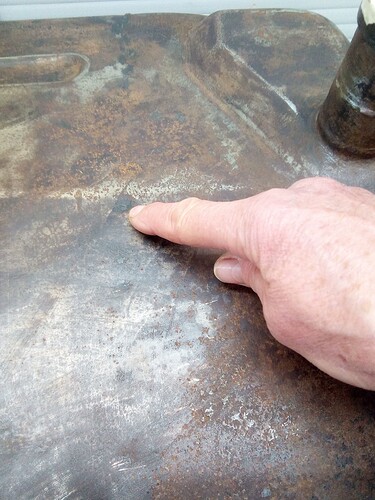 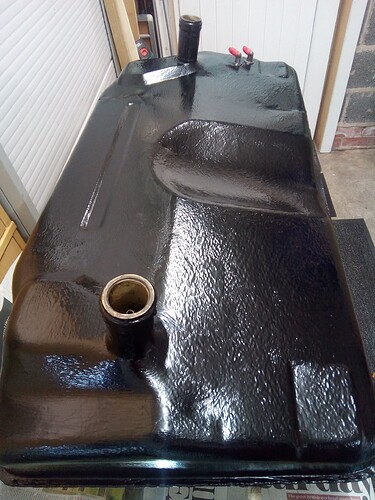 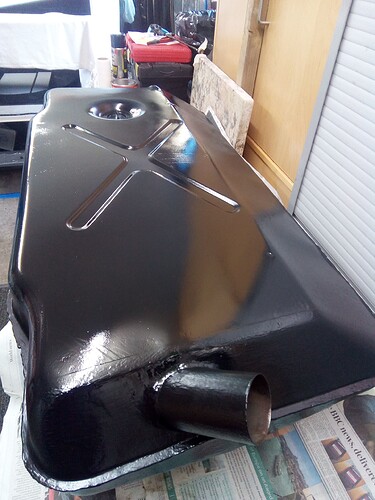 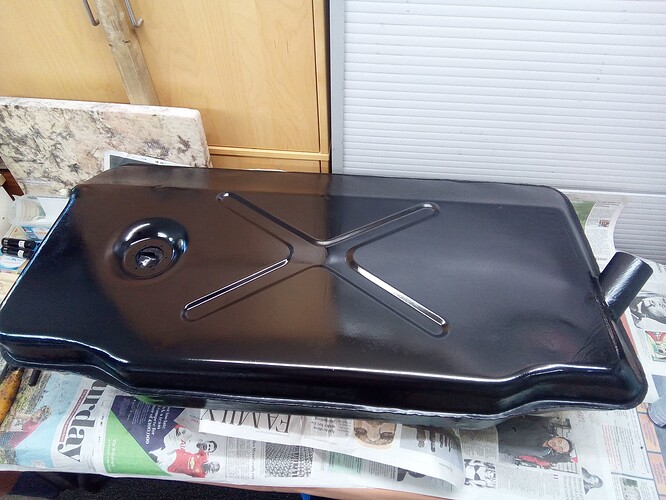 That sealing is very interesting. Hirsch advertises it for tanks that are not being reproduced, and owners that really have no other option. I think I’ll go that route.

Your tank is very different from mine. Here is how they made them when they first went to the all-steel body with the spare tire under the tank. 25 pieces of terne plate all soldered together. 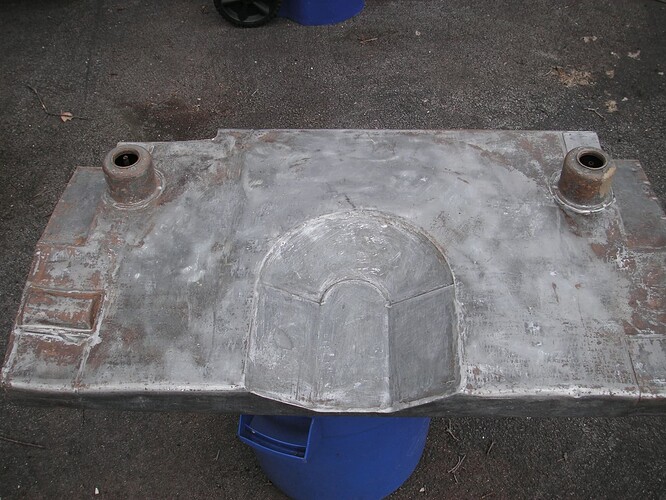 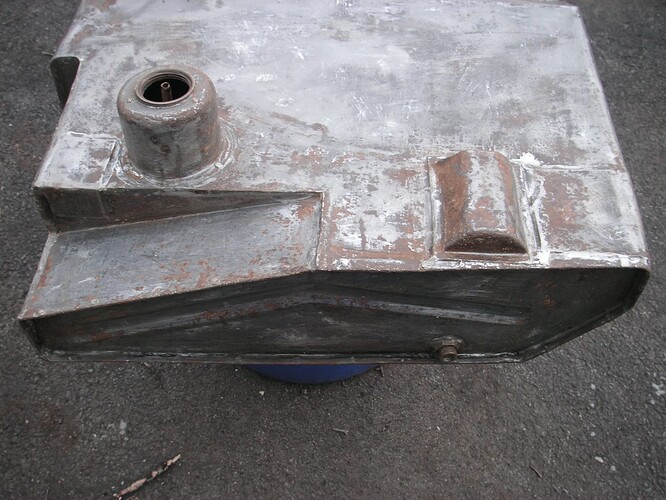 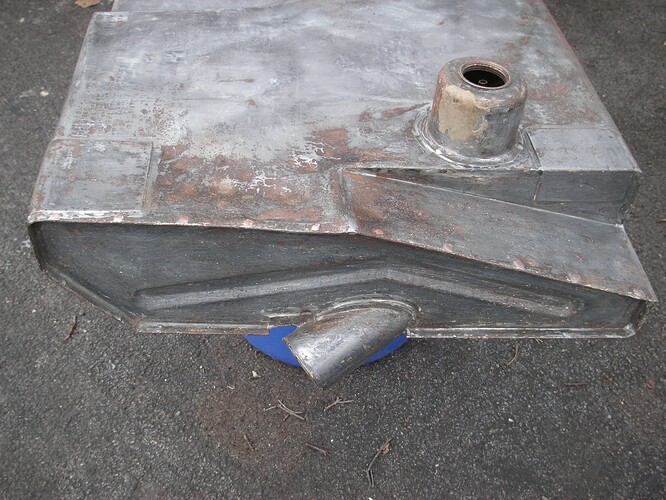 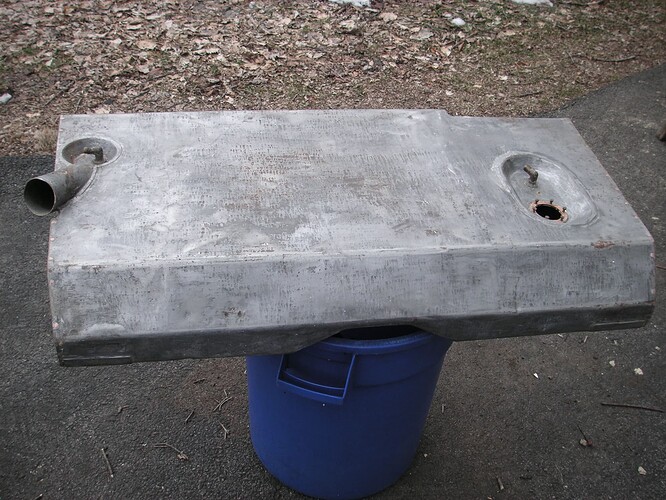 If it is terne plate, I’m surprised that it’s corroding that much… 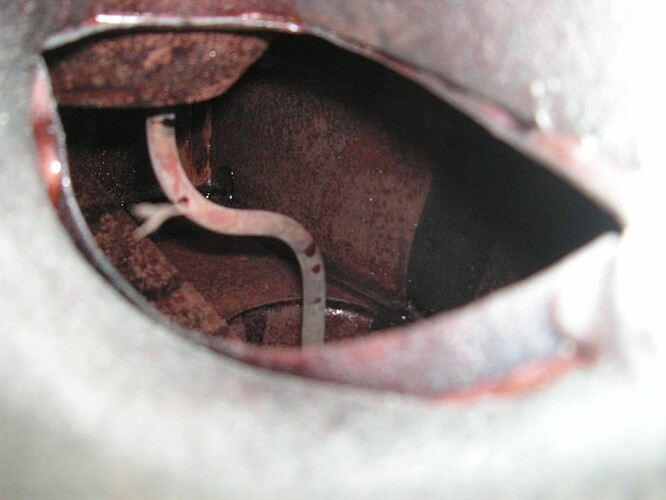 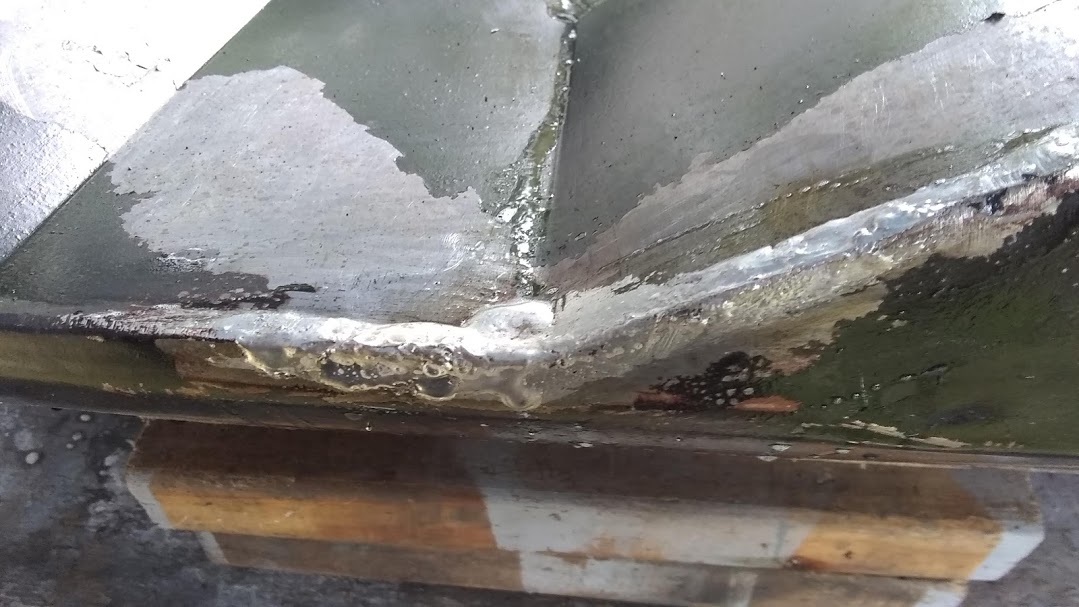 Another annoying thing about the 2-1/2 Litre with H3 carbs, is you can take off the top of the float bowls, but you can’t lift out the floats with a bent paper clip, because there is interference with the screw lugs on the carb body where the damper chamber pots are screwed on. You have to remove the float chambers entirely in order to get the floats out and clean out the rust down in there.

A couple of strips of emery cloth or sandpaper work quite well.