I need help confirming the correct terminal destination for the wiring.
The terminals are C1, C2, C4
The wires are grn/wht , white/red (large ga), brown (large ga), grn/black, and two yellow (or white faded).
There is a small black ground wire attached to the relay mounting stud.

Wither goest these?? Thanks in advance.

The Jaguar XJ6 was made from 1968 to 1987.(series I, II, III)
Electrical Guides are ALL DIFFERENT depending on MY.

Bob,
What model year is your XJ? What does this relay look like? Where is it located? I am not familiar with an “Alternator relay”, perhaps it is something else?.

Is it in the S57 wiring guide?
David

David,
I don’t believe that there is a part called an “Alternator relay” on the Series III XJ6. Perhaps more clues about the part he is asking about, including what it looks like and where it is located might help.

Thanks, David…the relay is described on p. 128 of the Heynes shop manual "Alternator (Lucas type 11AC) relay… " The right side of the page shows a picture of the relay attached to the passenger’s firewall. Below that is a diagram of the terminals marked as I described.

Normally, you would expect to find an 11ac alternator in an early XJ6, not a 1987 XJ6s3. It’s worthwhile making sure exactly what you have. In the Haynes manual, that relay looks like a Lucas SRB301 (rectangular can with mounting ears). This type of relay is also used for the start relay. The start relay pin designations and wire colors correspond to your description; it is in the middle of the firewall. Look at component 194 on p.280 in the Haynes manual.

Bob,
It sounds like you might be asking about the Starter Relay as Doug mentioned. Attached is a picture of the engine bay in my former 1984 XJ6 Vanden Plas. Is the part on the firewall circled in blue the part you are asking about? 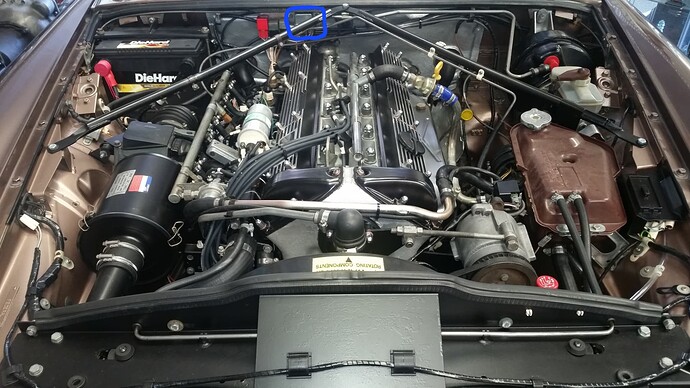 **
As others say, Robert, you are likely looking at the starter relay - alternator relay were only used on S1, omitted on later versions…

One white/yellow, powered with ig in ‘crank’, goes to relay W1 - to engage relay. The other goes the ECU, cold start injector and the diode pack - also powered in ‘crank’. The green/black connects to W2 - it is grounded through the ‘start inhibit’ switch. In ‘crank’, and gear in ‘P’ or ‘N’, relay engages - connecting C1, C2 and C4 together. Brown, constant power from battery, goes to C1 - white/red goes to C2, and connects to the starter solenoid. Actually those three terminals are ‘interchangeable’ - they are all powered when relay engages. The ‘third’ connector, C4 is a ‘spare’ sometimes used for items that needs power only in ‘crank’…

The green white is to the fuel pump - connecting to the fuel relay. Green/white is not connected to the starter relay…it has no business there…

The plain black attached to the relay mounting stud is ground for something else - it is nominally
not related to starter relay functions - unless, as Doug says, the start inhibit has been bypassed; in which case it is connected to W2…

Thanks, Doug. Your responses to my inquires now and in the past have always been very helpful😊. I think the confusion on this issue is my fault…I failed to mention that after the legal Pa. need for inspection/emissions testing, I replaced the air pump with a 100amp AC Delco alternator (not too difficult). That has an “exciter” wire that is powered by the ignition and illuminates the “bat” warning light and allows the alternator to start charging, after which it is self exciting and the batt dash light goes out… So the relay does have a momentary alternator function which probably why it is often referred to as an alternator relay.
Given your obvious detailed knowledge of this car, you already know this and I’m preaching to the choir, but I get excited when I learn something new.

I’m still confused, Robert. The indicator light you mention operates (just as you describe) from power supplied by the ignition switch. This is independent of the starter relay and independent of whether the engine is stopped, starting, or started.

Moreover, the factory alternators used the same excitation via the indicator light (with a parallel resistor BTW in case the light itself is burned out). This is not unique to your aftermarket, non-self-exciting alternator.

Some earlier XJs had external voltage regulators (which look like a big relay) but I don’t think that’s the issue here…the S3 Lucas and aftermarket were all internally regulated. And, while it is true that the alternator won’t begin charging (and extinguishing the light) until the engine is started, I doubt that what you mean? IMHO.

Haynes can be very deceptive. Not long after my Xj came in to my ossession, i saw one at the parts store. Oh tis s what i need!! it was not log fter that I decided it caused more confusion than enlightenment, I have nt opened t in a decade or more!!The usual wireson the aternaor are three at mst. Brownm fr power. Black fr ground and another for the excitement signal. Can not think f any electrical logc for a relay on an alternatr.

Brown, white-red, yellow… that is the starter relay. The alternator doesn’t go through there normally.

Carl,
The original post was very confusing. It wasn’t an S1 and didn’t have an 11ac or alternator relay. I have no idea why he was connecting a modern internally regulated alternator into what turned out to actually be the start relay. I referenced the Haynes manual only because the original poster did; it’s OK for a one-size-fits all manual.

I don’t know must about S1’s. Just from analyzing the documentation (I used to be a EE) the 11ac alternator and 4TR regulator are basic. A separate relay is used to bypass field regulation during start in order to excite it. Simple and crude.

That has an “exciter” wire that is powered by the ignition and illuminates the “bat” warning light and allows the alternator to start charging, after which it is self exciting and the batt dash light goes out… So the relay does have a momentary alternator function which probably why it is often referred to as an alternator relay.

**
Starter relay has no function related to the alternator, Bob - as Robert W says; the alternator is excited through the indicator light from the ign switch. With the alternator stationary it grounds the light. When the alt starts charging,there is 12V on both sides of the lamp; no current is flowing, and the lamp stays dark - unless the alt stops delivering…

As an aside; alts are really self-exiting due to remanent magnetism - but it may take a bit longer to start charging…

Ahhh, hysteresis and remanent flux that takes me back! I have a linishing belt that will only buzz if switched on. If you give the belt a quick flick it’s up and away. I suspect its a capacitor start induction motor - the workhorse of small motors - with a dead capacitor.