I’ve been trying to do some research on factory tan and like colours. I found references to Biscuit, Beige, Tan and Cinnamon in various E-Type factory colour charts on google.

Has anyone seen these colours side by side when new? I’m sure if still original, 40+ years on everything probably looks washed out. Most upholstery shops that sell interior kits only list Biscuit.

I’ve looked at photos on XKEData of these different colours but on the computer they all look the same.

What do you guys know about these colours?

Vikram,
They most certainly are different colours, but please appreciate leather colours are not so precisely controlled as paint colours.I have no solutions for inaccuracy of colours you see on an electronic screen , which you can adjust as you like anyway, but if you can get access to a set of the factory leather sample booklets, the colour variation is very clear and distinct.
Also keep in mind, Jaguar only offered certain leather colours at different times.
Roger

As you can see Biscuit and Cinnamon were different and wer even offered at the same time. None of them are to be confused with “Tan” which was a very saturated brown, a bit like a typical American football.

I have a couple of original Jaguar Connolly leather sample booklets, which have the advantage that the Connolly colour code is printed on the backside of each sample. The samples intended for customers that I have also collected during many years have the leather samples glued onto the cards and no Connolly codes are given, so they would have to be compared to known samples.

There are some pics in the old photo albums, I’ll go and dig them up and post them here.

The Jaguar Tan was available for very few paint colours in the 1960’s, IIRC only Black and Opal. Dark Green. Opal. Golden Sand was available with “Light Tan” which is also quite saturated and bright, almost orange or amber in bright light. That brochure and colour chart you have is from the 1970’s, I would say 1973/1974 with some very funky colours, I have never seen a Turquoise car with a Tan interior, nor a Fren Grey / Tan or Greensand / Tan but apparently they were available at the time. The Jaguar Beige again was very, very light, something the Ferrari people might call “Crema”. The original Tan gets often called “Tobacco” or “Cognac” in some cultures. In the early 1950’s there was a variation called “Pigskin Grain Tan” often called just “Pigskin” but it had the same tone of colour as Tan, hence the name. A few colours also had different grain, the most common was the Vaumol Luxan grain, but also Vaumol Crushed grain was used on Jaguars.

Biscuit and Cinnamon are not so far from each other that they easily get confused in photos as contrasts can vary depending on lighting, however Tan is way darker a d more brown and Beige is again way lighter. 885005 has a Beige interior.

Hi is your research for finding the best match for your interior.( if so post a few photos)…or is it general…i have a 69 2+2 that i recently retrimed…it was a beige colour(as on heritage cert)…after talking to a few of the top trimmers in tne UK and looking at there samples a colour called Barley (beige) that they all said was a known Jaguar colour was used… 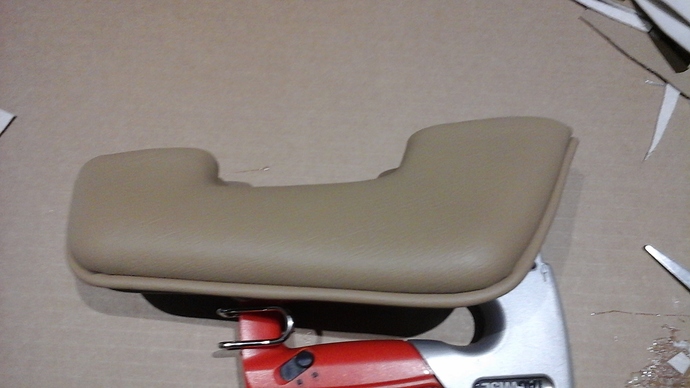 The photos below depict a beige interior from a kit that I purchased from OSJI (Bartlett) in 1987. It has been in the original packaging (sealed plastic bagging inside boxes and stored in the dark for 30 years). The seat coverings are Connelly leather and are jus a tick darker than the surrounding trim pieces. I believe the materials are sourced from the original Jaguar suppliers. The color shifts slightly in sunlight versus inside with a flash. The color is slightly more toward tan than what appears on 885005. (Yes, I know the side pockets were originally gray in color…quite ugly with a beige interior). 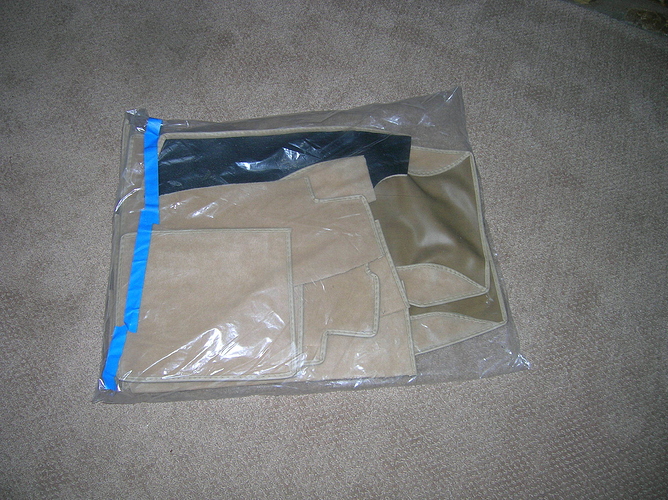 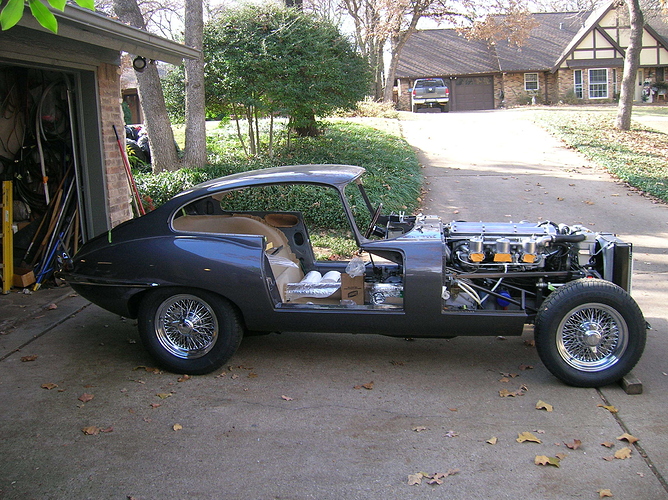 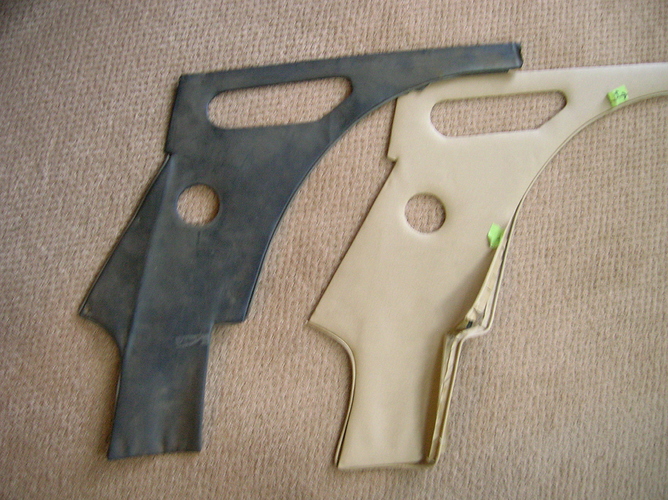 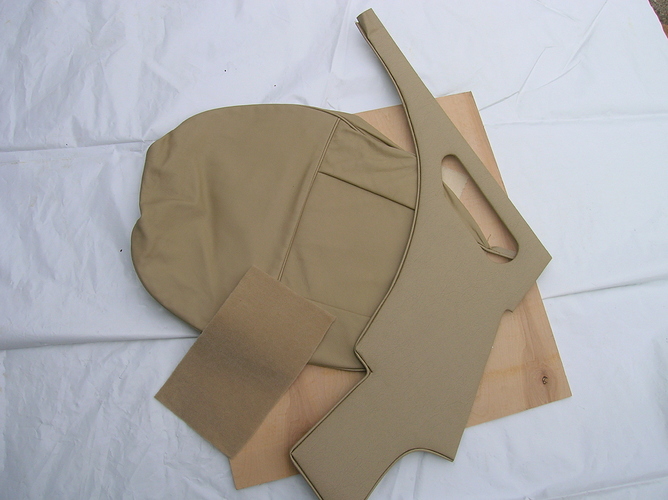 Here’s another example of a Beige interior and looks very similar to Eric’s. This kit was supplied by Suffolk & Turley who were original Jaguar trimmers. It was difficult to keep clean though. 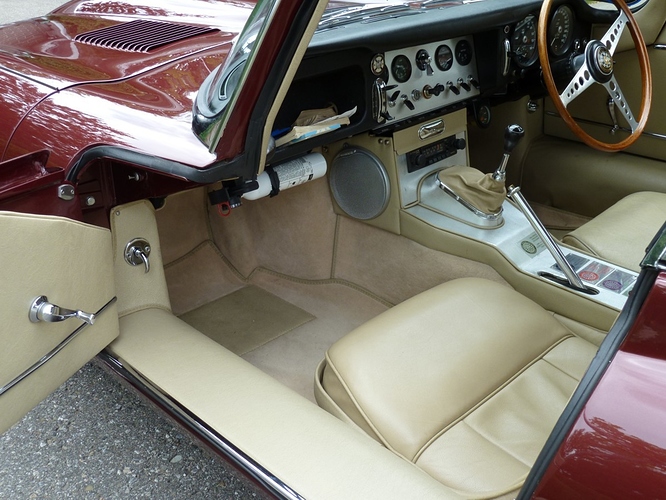 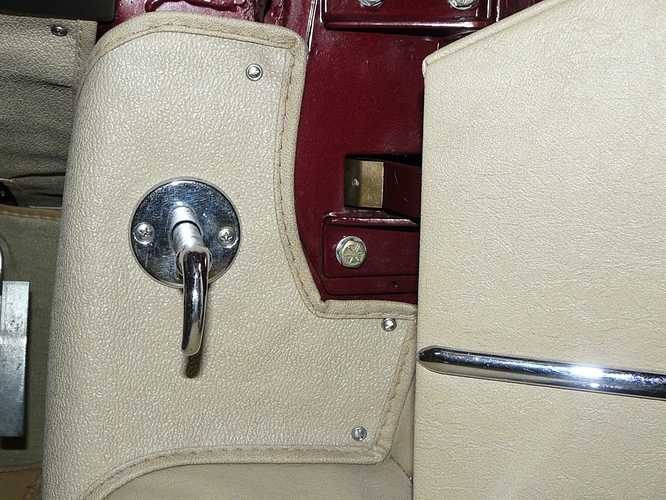 Thanks for all the info. Makes a lot more sense now. I especially like @ptelivuo translations, i.e beige = cream, tan = cognac.

I have a regency red car with an aftermarket interior installed by one of the previous owners. The interior is completely water damaged, torn and will need to be replaced. I think its a Biscuit colour. Originality is long lost (as the car was initial Sable on Cinnamon according to JDHT) so I’ve been entertaining the idea of getting a different interior colour than what I got the car with.

I think regency red on the exterior would go well with Jaguar Beige (i.e. Cream) or even Jaguar Tan (i.e. cognac) on the interior.

Vikram, my interior kit is Biscuit and you may have seen it on the CCOL: 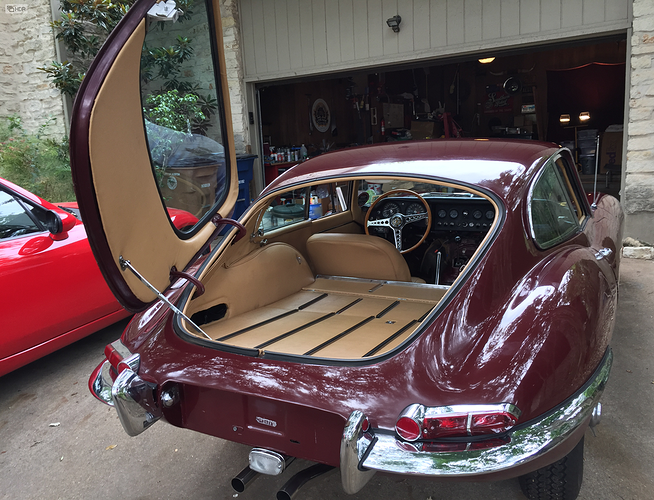 Mine is Beige, with Regency Red exterior and also ‘as seen on the Oil Leak’: 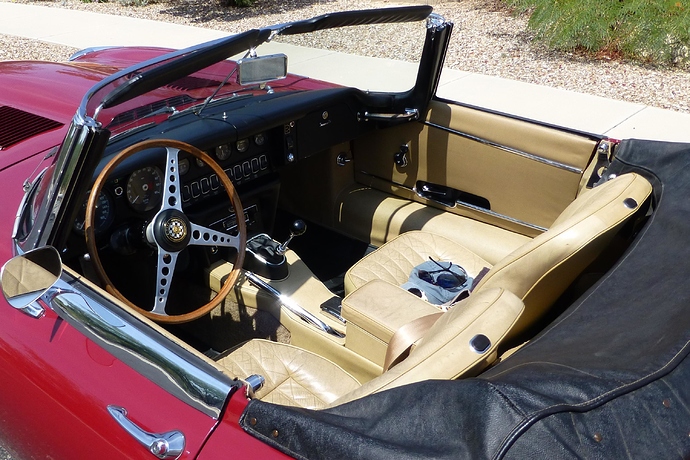 Hi Vikram…you should be able to have a kit made up in any colour. for your price $4/5k…best option is to get samples so you can see exactly what the colour will be…have a look at BAS in the UK they supply top quality trim …they are well known to this forum but dont get them confused with BAS in the US…its a different trim company…try here http://www.car-hood.co.uk/jaguar-interiors

The beige in your car looks closest to the colors in my Bartlett NOS mid-80s vintage kit. Clive’s photos and those for 885005 appear quite skewed toward white/cream. By the way here’s a photo of the writing on the package containing the Connelly seat covers in my kit. The numbers might mean something to a trim shop in the know. The top number is FAX 119, then 10688, Lt Beige 1964, S1 F.H.C. Bucket seat covers…maybe just internal Bartlett numbers. 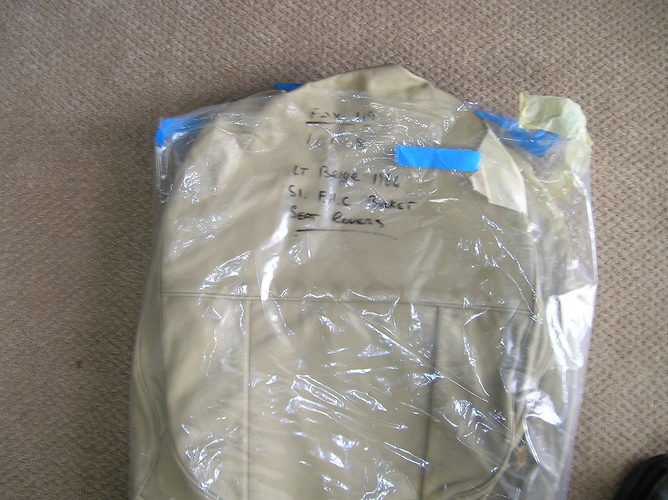 Clive, I’ve been drawing inspiration from your many photos for a couple years. I believe you sold the car (correct me if I’m wrong) and wish I could have visited and seen it in person before that was done. (I get to Ontario on business now and then).

FWIW - I’ve already got my interior kit and paint has been applied to the bulkhead and subframes so I can get the car moving under it’s own power. Interior will be the LAST thing on my car for obvious reasons but I’m planning on running cinnamon/brown Coco Mats because of how difficult I know that Biscuit interior is going to be to keep clean.

Still won’t solve the scuffing on various bits when we contort and crawl into these cars we so love though.

BTW - I was offered a cinnamon interior for a coupe by Chuck Hadley and I tried like the devil to convince my family that cinnamon would look great with opalescent maroon, even though it was not a factory color. I still think it would look great, but since I’ve already bought the biscuit interior kit it’s too late to turn back now!!!

Scuffing is not as big a problem as you might imagine. I drive my car a lot, not that careful about getting in and out, but cleaning scuffs works pretty well. Red not biscuit, but how hard could it be?

cleaning scuffs works pretty well. Red not biscuit, but how hard could it be?

[quote=“RonS1, post:12, topic:350283, full:true”]
Clive, I’ve been drawing inspiration from your many photos for a couple years. I believe you sold the car (correct me if I’m wrong) and wish I could have visited and seen it in person before that was done. (I get to Ontario on business now and then.[/quote]

Thanks Ron, that’s nice to hear and it was too bad you couldn’t stop by when I had it here. Yes, it’s sold and now back in England. It’s almost 20 years since I finished it and it was getting harder on my knees to get in an out of it. Something that probably never occurs to younger folks.

Well Clive perhaps we could still get together in Ontario sometime. Really have enjoyed your contributions over the years; so you have a Word document of your Bonnet restoration process? I’ll be ripping into one of my two bonnets soon I hope, so important in an E and if recall you built a wood template to restore the shape when everything went back together.

Hope you are doing well and enjoying a new automotive journey

Ron, I don’t have a word document of my bonnet rebuild but if you PM me, I may have something along those lines that will help.

Actually, I have a whole bunch more photos of the rebuild procedure than I was able to include in the old JL albums and it occurred to me that now that we have this new forum, maybe a separate “Garage Section” or something similar could be added where such jobs can be described complete with photos, readily accessible to members.

Maye Andrew will weigh in and tell what he thinks.

Here is a picture of an original interior in “Beige” ('71 4.2 FHC) that is an exact match of the current “beige” being offered by BAS International, that I go in the mail last week. 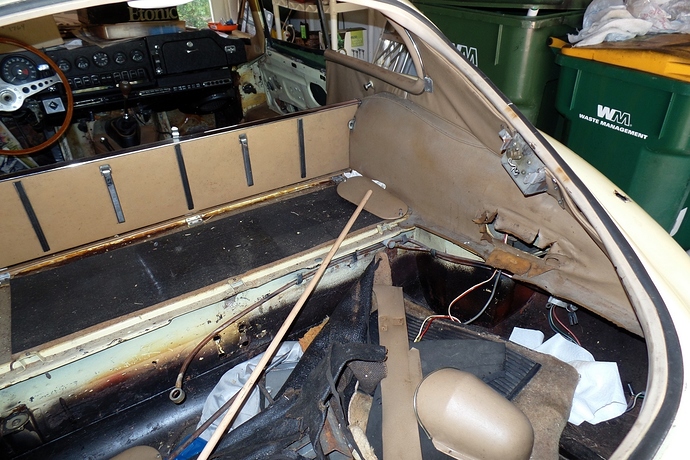 Does anyone have any photos of the “tan” colour interior they could post here? It seems to be quite rare.

Hi…if you look through this post you will see a new trimmed ligh tan interior…look at page 25 http://forum.etypeuk.com/viewtopic.php?f=8&t=5523&start=240