Should there be felt between the body and frame?

I believe there should be felt anywhere the body directly touches the chassis. Some have used rubber strips because the felt tends to absorb water. The felt is about 1/4 inch thick before it is compressed, so I am not sure what thickness of rubber would be a substitute. I believe its sole purpose is to reduce rattles and metal on metal wear.

Some have used rubber strips

SNG sells this as a body-mounting kit.
Works and fits very well.

EXCEPT the 120 DHC’s have aluminum “pucks” of different dimensions and sizes AND the infamous
“Red Fiber Washers” (used as adjusting shims)
As Bob C noted, Felt was used where the body directly touched the chassis… especially in the area of the boot and the inner front wing shields. Common Sense dictates placement… Common Sense ALSO dictates using some “Non-Water Absorbing” material INSTEAD of Felt!! Rust is NOT our friend!!!
Charles Ch #677556

My 140DHC (and I think all XKs) uses the aluminium and fibre spacers.

The only area that has felt on a 140 (apart from the fuel tank) is where the floor of the passenger compartment sits on the chassis. The positions of the felt are shown in Viart’s book. My very rust-free (all things being relative) car still had the original felt in position, but the moisture it had inevitably held over the years had produced light pitting in the top surface of the chassis rails. The floors on my car were the only areas where rust had destroyed the metalwork completely, but it’s highly unlikely that was down to the felt entirely.

When assembling the body back onto the chassis frame, I used self-adhesive closed-cell neoprene strip, as sold by Woolies Trim in the UK in varying thicknesses and widths. Very easy to cut and apply. I have used this several times over the years for similar jobs and it does not take up water. I would only use felt if:
1 - you will never drive it in the wet, AND
2 - you will never wash the underside of the car
3 - the car is a museum piece and will never be driven
It’s a personal opinion only, but I’ve restored way too many cars over the years to let felt anywhere near steel and water. I use modern paint, engine oil, tyre compounds etc. - why not modern ‘felt’?

I have a different opinion on the use of felt vs rubber and would appreciate feedback about whether it makes sense. It is my sense that rubber spacers would actually promote rust more than felt would. This is my reasoning. Place a square of felt and a square of rubber side by side on a water impervious surface and soak them both down. Leave them alone for a day or two out of the direct sun. When you check them you will find that all the moisture has evaporated from the felt pad but the rubber pad is still wet underneath. Really no different than what occurs between 2 overlapping pieces of sheet steel in a wet area. Perhaps the old engineers were smarter than we think? Opinions?

I would have thought that is actually very different from what occurs between two pieces of sheet steel. If you have left the felt open to the air, then water can evaporate easily from the surface. I suggest you try the same test with both pieces of material lightly compressed between two sheets of steel. Spray them from the side for about 20mins with water, then leave a couple of days. Then remove the top piece of steel and see how much water you have in both pieces. Chances are you would have to wring out the felt, but not the closed-cell Neoprene.

I would not use rubber, as it won’t compress enough to do the job of the felt.

Yes. I agree that the neoprene will not absorb water and the felt will. That Is not the point. The concern is capillary action resulting in a layer of water between the neoprene and the steel that then is trapped for long periods of time with no drying out much as happens with a pinch weld. The felt will also get soaked but I would expect that the water will wick out and evaporate much more quickly. I am hoping to hear more comments.
I agree that my example was not optimal. I should have suggested covering both materials with steel for the test.

I’d have thought that there’s a lot more capillary action going on in a compressed layer of absorbent felt than in closed cell neoprene. Long strips of felt held compressed in a sandwich are not going to give up water easily, I’d think. With regard, and respect, to the old engineers, I don’t think closed cell neoprene would have been available in the fifties. Original materials are not always the best… but if you want 100% originality, you have no choice, obviously.

Any thoughts on how wide the original felt was?

I have used the neoprene on my 140DHC, but there’s no route for water to get in. It comes with a strong adhesive on one side, and I’ve used a contact adhesive on the other. It’s worked before on aluminium-bodied cars, so should be OK on steel.

There’s is felt and felt: an enormous variety in quality from pure natural felt down to synthetic versions.
In the lighting industry we’ve used felt between the housing and the glas or plastic bowl for decades to allow e.g.road lighting fixtures to “breath” without letting rain water enter.
Felt made of wool (the original material used for ages) has natural oils in it and is therefor water repelling. In addition there is nowadays an additionally “impregnated” version that will even live longer.
It may require a bit of effort to find a good quality felt, but they are still out there. I support the idea that Jaguar engineers knew what they were doing when opting for felt (as there were already many rubber varieties to choose from then). 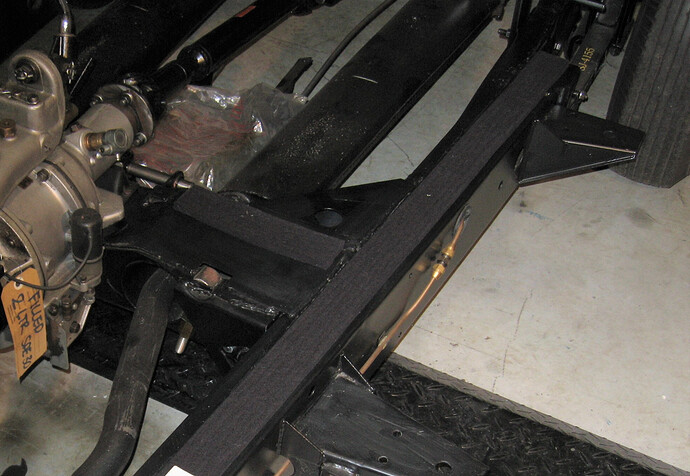 Got good felt from SNG, any recommendation on how toght the body should squish the felt?