I need again some help.
Does anyone knows a supplier of the bonnet pull cable bracket Part no. C.10055 for an XK 140?
Even a drawing with the dimension would help.
Regrettably it is missing on my car, no clue why it disappeared during the restoration of the body.

Any help would be highly appreciated.

Here is a picture of the bracket on my car which is a RHD dhc. There is also an illustration on plate 7g-1 of XK 140 Explored. As you can see the bracket is welded to the underside of the scuttle. 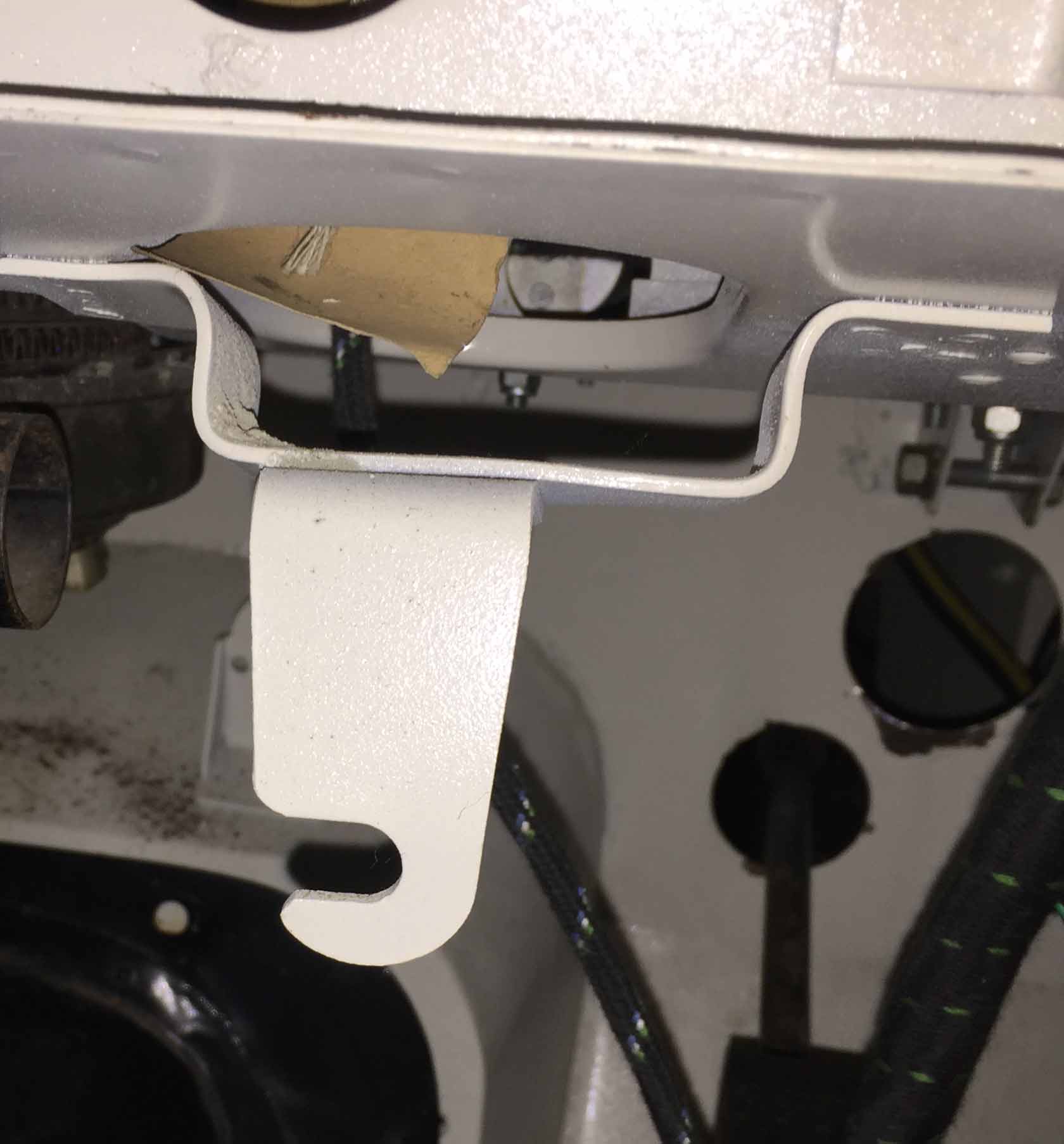 As a corollary to this and for the aficionados of minute detail, may I just point out that although the illustrations in XK 140 Explored are for a LHD car the bracket seems to be mounted in the same position as on a RHD car, that is on the right hand side of the scuttle. The only difference is the illustration shows the slot the other way round ie open side to the right rather than the left as on my car. If the illustration is correct it would mean either that Jaguar made two versions of the bracket or alternatively and more likely, they stamped out the slot first from flat material but then weren’t fussed about which way they bent the return at the top.

Further to Eric’s comment: this is same bracket in a LHD XK 140 FHC. Looks absolutely identical to me. Photo was taken before restoration started. Part of the outer cable of the release cable just still visible. 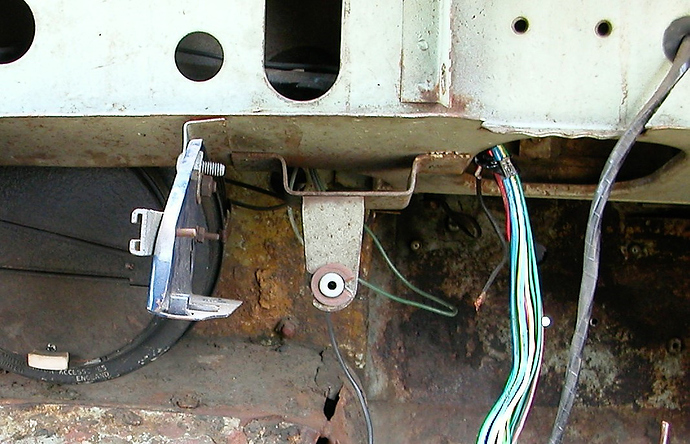 Most interesting Eric.
When preparing XK140 EXPLORED I cant say I noticed these brackets with opening to left or to right, but doubt its a LHD/RHD issue, more likely an OTS/DHC/FHC issue or maybe just a case of it didn’t matter, just depending who was making bracket.
See my LHD OTS bracket before I fully stripped car.
UnderDash.pdf (1.3 MB)
Also see same bracket after body shell has been fully restored, converted to RHD, and in primer only, this bracket was not touched as I was unaware of any potential RHD/LHD variations. 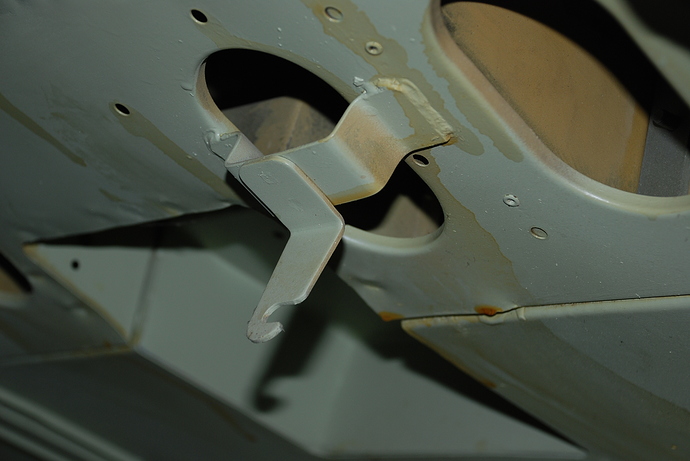 So be interesting to hear of a few more brackets - LHD/RHD and OTS/DHC/FHC and see if any pattern, or maybe a body shop workman having to many pints on a regular basis

on my 1957 LHD OTS the bracket is exactly like Roger Payne pictures. perhaps it is handed that way so as not to be easy to pull out of slot when done from drivers seat? i remember it coming adrift in the distant past.

My 1956 DHC, left hand drive, has the style of bracket with the opening to the left. 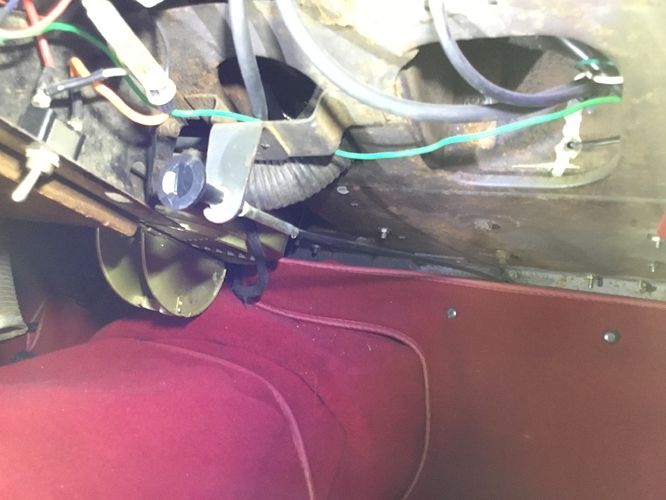 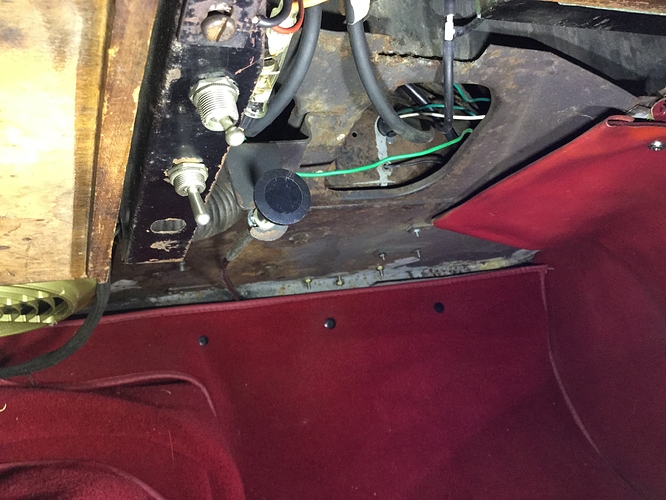 By the way, thanks for making me look at this area of the car…you can see in my bottom picture, the nut on one of the small bolts attaching the windshield washer reservoir to the firewall has come unwound and is just about ready to fall off.

Another vote for the slot opening on the right for my LHD 1956 OTS MC.

I guess this really is the category: “just depending who was making the bracket”. Both versions have the centre of the 90 degree bent angle piece in the same asymmetrical position spot-welded on the larger bracket. Even with the drawer or radio installed next to a bracket with the opening from the left, there is still enough space to slide the cable in.
In fact all that differs here is how the (pre-stamped) blank was put in the machine to get the 90 degree angle.

Looks to me as though the bracket itself is the same.
What is different is its orientation of the second-part of the bracket.
With OTS, the Knob mount is further forward, so the knob will be further under the face of the thin leather covered dashboard, but on the Coupes, knob mounts further rearward to be more easily seen/accessed under bulky thick/timber dashboard.

Still not something I had picked up on before, especially DHC being different. OTS/DHC are ‘mostly’ the same bulkhead assembly, with FHC totally different.