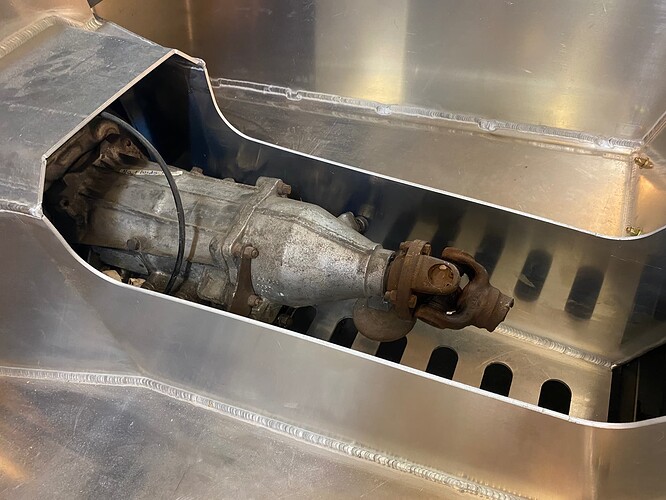 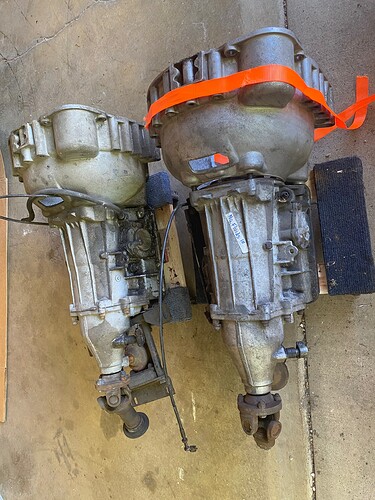 I believe I have two BW-12 transmissions. The badges are faded away except for the stamped numbers, which are 14153 and 38753.

So the big question. Is there any reason why I shouldn’t obtain a BW-66 rather that use one of the BW-12s that I already have? From my research, the 66 seems to be better built (by BW standards) and it looks to be the exact same size as the BW-12. Am I wrong on either of those two conclusions? If the 66 is wider than the 12, then it’s a moot point as it won’t fit.

To save responses and answers, I’m restricted to automatics because of a disability, and the BW-12 with its narrow width is the only transmission that will fit in the Jag replica I’m building.

As far as I am aware, that is either a BW 65 or BW 66 transmission: it’s identical to the one I have in my hot rod.

Ok. I’m just confused because I can’t find a definitive way of identification, which seems completely useless and very British. Only visual difference between the two that I can find are the pans. All the stock specs I’ve found for a 1975 Series 2 XJ6 says it had a BW-12, which is on the left. I found a BW-65 for sale online that was claimed to be out of an early 80s Series 3 XJ6, and the transmission pan looked like the one on the right. I guess I’ll have the BW transmission on the right rebuilt and hope it’s the better of the two. I’m honestly giving myself a headache thinking about it. 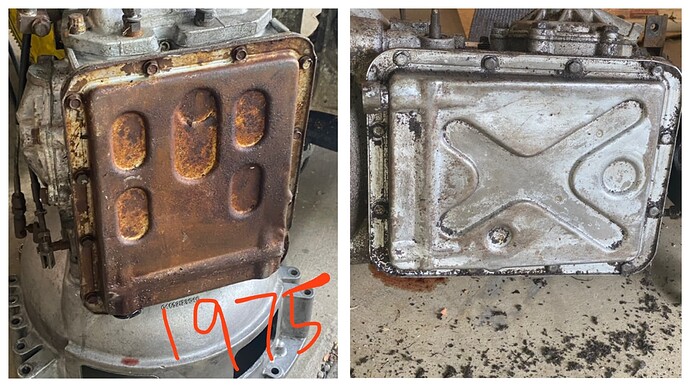 Neither of these is a BW model 12 transmission Doug. BW12 is a big heavy cast iron casing and these look like aluminium…

Both are 65.
12 is the strongest, 66 is okay (not my favorite but some like it better) but 65 is perfectly adequate and will work exactly like a 66. Minor changes to cope with the heavy XJ and its large engine back when they were used hard. Lighter car like a D type, surely not a problem.

Make sure the throttle valve/ kickdown cable is set correctly or it’ll eat bands and break relatively soon. Wonderful welding, good to hear from you.

I can testify to that…

The shift cable is the same, but the cam it controls may be slightly different; doesn’t matter. As long as the shift quality is okay (light jerk slowing into 1st, no flaring up during gear changes, not too smooth, shift points close enough) it’ll be alright.

The main changes they built into the 66 are stronger shafts and more oil thanks to a deeper oil pan. Both not really necessary for a light car, maybe if you go racing a lot but you won’t do that if you use an old 3 speed.

Not a BW-12? I can’t believe that the Internet lied to me…

Huge huge thanks everyone. Yeah, I won’t be doing much racing. This is my childhood dream car and I’m making a sunny day two lane cruiser and not a track day car.

I have a while before I’m on the road, but in regard to setup, is there a YouTube link, book, or Forum Thread, etc to help me get the throttle valve and kick down cable correctly set?

You need a workshop manual. You can find the values here in the forum too.

BTW, I think the S2 might have come with a 12 at some early time, but I wouldn’t know, I have sat in 3 S2s but not yet driven one.

The kickdown cable tells the transmission (via the throttle valve) how much torque it gets. The more torque it sees, the higher the shift pressure and shift points. Since your car will be different in a good way your main focus will be to get the pressure right at idle and you also want kickdown around the full throttle position, the latter doesn’t have to be so precise.
In other words, pull on the cable and make sure you can go through the full range of the throttle valve - make sure you can make some adjustments when the engine runs. From memory the right setting is around 5mm away from rest at an idle of ~750 rpm. The gauge or some driving will tell you the rest.
Keep us posted, It’ll be nice to drive!

I have a BW65 for sale in the classifieds.