My 1967 S1 4.2 OTS has just started making an odd noise. Right after the engine catches on startup (within a couple seconds), there’s a short chattering sound that seems to come from the bellhousing area.

The chattering sound lasts no more than a second. Could this be a starter issue, perhaps it not cleanly disengaging? If so, does it mean a starter out rebuild job, and is it foolhardy to give it a few more dozen start cycles before addressing it?

i think they all eventually do that. mine started after i switched from reg oil to semisyn motor oil.

69 roadster
I would heartily disagree that “they all eventually do that”. At least none of the three I’ve owned over the last 40 years ever did. And very unlikely a simple change of oil would be the culprit, even for valve train clatter unless you also make a significant change in viscosity.

Have someone else start the car while you are observing/listenting to the engine so you can narrow down the source of the sound. If the starter is indeed hanging up and making sound, there is a good chance the ring gear could be damaged so I would avoid starts until you get it sorted. Sometimes old starters just need a disassembly and cleaning. Personally I’m a fan of the aftermarket gear reduction starters, but the stock starters work fine if they are fully healthy with clean and solid electrical connections.

I can hear it pretty well from the driver’s seat. It sounds like the noise comes from the right side of the transmission area, which suggests the starter. I can’t think of any other explanation.

The stock starter works well enough for me. If it has to be replaced I’d certainly consider a modern gear reduction unit, but I’m suspicious of potentially ill-fitting “upgrades”. Replacing the stock starter is absolutely not worth embarking on a “fitment project”!

Also, the manual talks about routine maintenance of the starter drive, saying that if there’s some meshing issues it may need to be cleaned. If I’m on the right track suspecting the starter, then this is what I’m going to try first especially if it can done in place (I have a lift to get to the underside fairly easily.) But I’m not sure about that.

If it has to be removed and dismantled then I’d consider a replacement - if I can find a reputable one that fits without “fettling” to get it to work properly.

I’ve owned my car for 26yrs, it was overhauled around 5 yrs ago, other than that it has never been touched. Works great! (Touching wood).

On my '68 4.2 I can view a section of the ring gear through the forward bell housing inspection hole. Mine has a cover on the forward hole that pivots open. Maybe that would show you if any ring gear damage is happening ? Just a thought. 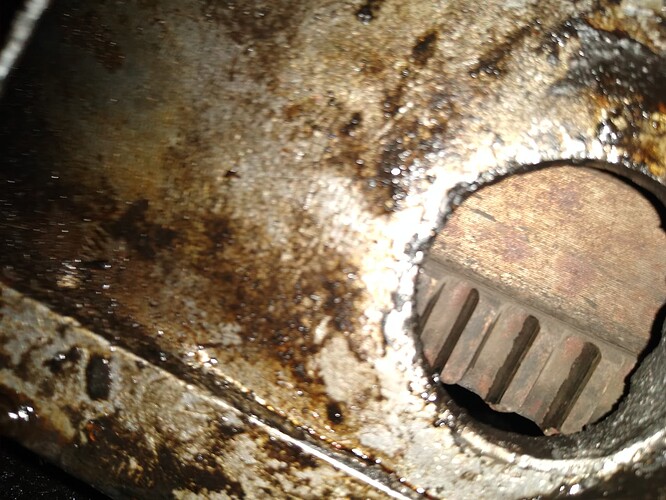 Thanks, it looks like OTS driving weather is ending where I live so I’ll park the Jag back on the lift and take a look at the starter bolts and see if the flywheel has signs of being nicked.

To correct an inaccuracy in my previous post, I was looking at the service procedures for the 3.8 starter. The 4.2 pre-engaged starter is quite a different animal and described in the 4.2 addendums.

There is a nut to set the pinion movement gap, this may be the equivalent of moving the starter around. If the gap became too tight, maybe it’s not clearing the flywheel teeth when retracting. Thus slightly increasing the gap might let the pinion clear the flywheel. (I hope, it would be an easy fix.)

is it conclusive that the chattering is from the starter?
if so, why only on minitial start up and not when warm?

I don’t know for certain it’s the starter - but I can’t think of anything else that would make this sound, that seems to come from the lower right region of the footwell/firewall space. Any other possibilities are most welcome.

As far as I can tell, it happens on any start cycle, not just cold start. But I haven’t driven it much since I noticed the issue. It had finished a 700 mile drive. I didn’t notice it during that trip, only a day or two later as I moved the car out to clean up it.

Our 72 XJ6 has the same starter I suspect. We bought it in 1987 - correctly dated for car - so expect its original. I have never attended it in 35 years.