I have been lurking on the MKII and XK8 forums but I am now starting the re-build on my MKII 3.8 engine I have removed the head which will be sent to the machine shop for welding and milling.
While it is there I am cleaning up the block and I am sure this has been covered before but times change and so do methods, SOME of the head studs I can remove with an extractor but some do not play nice, obviously I do not want to shear off the studs but want to remove them prior to installing new ones, any advice and getting the old ones out would be gratefully received 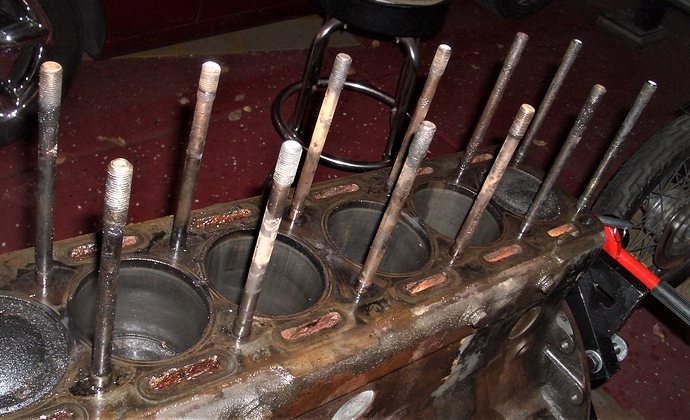 Have had great results with one of these.

I simply wouldn’t renew your studs, unless individual studs were badly corroded, and then I would only replace the individual studs that are badly corroded. If you are doing work on block (hone/bore) you have no choice. Hard to tell from a photo, but from what I can see none of them look bad enough to replace, some minor corrosion is not an issue as these studs were made of high quality steel, and were somewhat over-engineered for the recommended torque.

If you do replace them, be exceptionally careful you replace/renew the one dowel-stud in its same correct position - left-side, second from front. You can see the dowel stud in photo with the dowel part obvious just above the top of the block. This oversize dowel locates precisely in a similarly oversize reamed hole in the cylinder-head. Otherwise, thoroughly clean them, and apply an anti-seize coating all over apart from the thread, as this stops any further corrosion, but also ensures head can be lifted off next time without any stuck studs. New studs are a lot of money unless actually needed, and by leaving them in place no issues with removing them and frozen threads that could damage surface of your block.

When you get around to putting them back in, they don’t need to be any tighter than finger tight. The operating tension comes from the nut end. Clear the block threads with a bottom tap and put a dab of antiseize on the stud threads.

Also, when the studs are off, it’s good to use a large, fine file across the deck: use lightly, and if will indicate the flatness of the deck.

On a 3.8 I would check for cracks in the block running between the sleeves.

I used TWO dowel studs to locate the head…the second one installed into the next-to-last hole on the intake side. But, verify that your head is just like the earlier heads in the sense that there are actually 4 locations where a dowel can be used…both holes (2nd set in from the front) and both holes (2nd set in from the back). Seems silly to me that Jag did not locate the head in a more positive manner using 2 dowels like virtually every other engine design, especially since the head casting already provides for this.

When it comes to refitting, I installed just the dowel studs before head replacement, then threaded in the remaining studs thru the stud holes in the head. I did not want any aluminum chips getting knocked off down onto the mating surface by the upper stud threads scraping against their bores. OR, you could wrap some electrical tape around the upper threads.

Buy a bottle of “Oil of Wintergreen.” Its the active ingredient in Ben Gay ointment.
Place one drop at each thread to wick down.DO NOT get in eyes.
48 hours and any stud in aluminum will come right out.
I pulled all studs from a 4,2 this way.

I will have to give that a try!