Hello there. Long time reader, first time poster.
I have a '74 XJ6 S2 and I’m in the process of rebuilding the air con unit. My car had a molested hvac system so have pulled it out and reco-ed what I could.
I’m putting it back together now using the Delanair Mk2 schematics available on the interwebs, but I’ve found one difference. The schematic I’ve found includes a solenoid valve to direct the air to the blower case flaps (to control recirc) but on my car all I can find is a solenoid with a single port on it. So it seems that it’s venting to atmosphere. It has the same pink & black wires going to it, so I’m assuming it’s on the same circuit. Does anyone know why this is different?
Thanks in advance!

Welcome @tyoung
I don’t have anything to add to your post, because my '74 has suffered the same issues. It sounds like at least you’ve got the Air Con bits. Unlike my '74 XJ6 it doesn’t. I also have a question. is your XJ a short wheel base XJ6 or a XJ6L ? The reason why I’m asking is because I’m trying to get a count of SWB '74 XJ’s. So far I’m up to 5.

**
Don’t know ‘why’, Tim - but there may be subtle differences between early and later versions of the Del 2 ?

On later versions the vacuum control solenoid vented the vacuum system to air in one position - to default the system to defrost. While in the other position the valve applied system vacuum to the blower case flap actuator - vacuum to the actuator being controlled from elsewhere…

The later set-up did indeed require two vacuum ports on the valve - with one position open to air. So is the valve you have open to air in one position? Nominally; if the blower case flap actuator is just connected to a ‘T’ - adding another ‘T’ with ‘your’ valve connected to the vacuum line, should serve the same purpose; evacuation the vacuum in ‘Def’…?

Since your hvac was molested; a PO may have bastardised the set-up - or the ‘old’ hvac was indeed different. And the schematic for the ‘new’ set-up cannot be slavishly followed…

Well that makes six worldwide that I’m aware of. Send a Pic please. Also where are you located if you don’t my me asking. If you don’t want to post it on the forum, PM me.

Pink and black are indeed the appropriate color wires to control the recirc flaps.

However, the solenoid should have 2 ports. 1 to connect to vacuum supply and the second to connect to the flap actuators. There is a third internal port…which exhausts to atmosphere.

In one position the vacuum is directed to the flaps…and in the other…the vacuum is blocked and the residual vacuum in the flap line then bleeds to atmosphere.

It is not uncommon for the plastic hose nipple to become brittle and break off…and relatively clean. 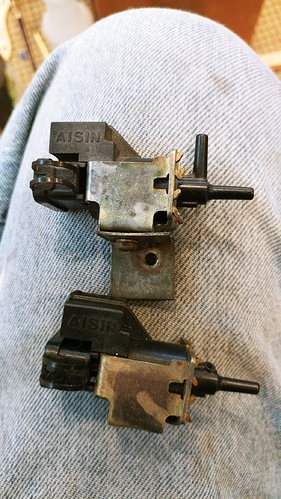 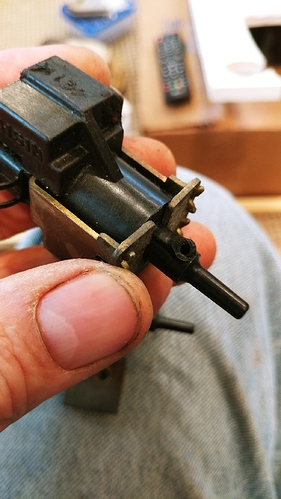