Do you think that I could install an ECU close to mine, but slightly different, like the LNA2500AA or BB, which seems easier to find?

I had my car diagnosed by a professional Jag expert who confirmed 100% that I need to replace this part. Before, the engine used to stop when hot after 15 - 30 min drive. Recently, I drove 500km and the engine did not stop. Hence I hope that a miracle happened, by expert told me that there is no chance that this problem goes away by miracle and that I need to replace the part anyway.

PS: the engine stops mostly when the car is not moving or when it is moving at very slow speed and the engine is hot.

Does anybody have this part for sale? Did you face the same trouble as me? Any opinions, advise?

Does anybody know if this ECU has capacitors in it? The type that might have gone bad by now, and could easily be replaced using a soldering iron?

Hi Kirbert! Thank you for your comment! That would be great indeed if I could fix the spare part instead of changing it as it is very challenging to find as Jag discontinued its production…

Would it be complex to change the capacitors if the issue is as you think?

If there are typical electrolytic capacitors in there, you can just look at them and tell if they’ve gone bad. They have a flat aluminum top with a couple of creases in it. If that top is domed, it’s bad. Read the ratings on the side, order replacements, install with a soldering iron. It’s amazing how many electronic gadgets can be brought back to life with this simple fix.

Trouble is, I don’t know if your ECU has that kind of capacitors. That’s why I was asking if anyone else here does. Of course, you could just remove the cover and snap some pix and post them.

Perhaps I should point out that another popular fix for electronic boards is to toss them in the oven at a very particular temperature and leave them for a while. It remelts all the solder, allowing it to flow a bit and corrects any cold or failing solder joints. There’s also a contention that it fixes some of the components soldered to the board.

Isn’t this the ‘body processor module’ as opposed to the engine management ECU?

By 1995 build the X300 XJ12 should’ve been on the Nippon Denso ECU rather than Lucas injection ECU & Magneti Marelli Ignition ECU.

Yes it is the Nippon Denso ECU indeed. I will try to attach a picture. 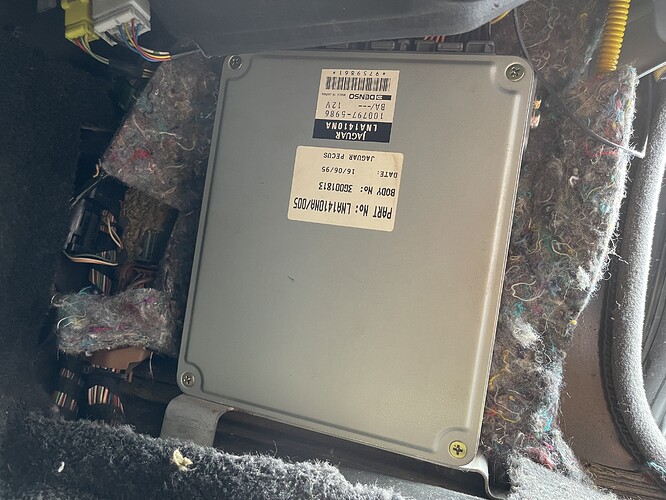 Perhaps I should point out that another popular fix for electronic boards is to toss them in the oven at a very particular temperature and leave them for a while.

Re-flowing solder is possible but not something that I would contemplate doing in a domestic oven. If there are electrolytic caps on the board it is likely that they are only rated to 105C, you would need to heat the whole board to way more than that to re-flow solder. I guess you would take them off first for replacement anyway. Possibly a high temperature heat gun would do it as you could localise the heat.

If it were me, I would take the manual approach with a regular soldering iron, plenty of flux, and lead based solder. Concentrate on areas where there is the potential for physical fatigue, such as the connectors and around the mounting holes. Sometimes you can actually see where a dry joint is causing the problem.

If it were me, I would take the manual approach with a regular soldering iron, plenty of flux, and lead based solder. Concentrate on areas where there is the potential for physical fatigue, such as the connectors and around the mounting holes. Sometimes you can actually see where a dry joint is causing the problem.

I totally agree.
Solder melts at 180° to 190° C, I can’t see how you could do it in an oven without causing serious damage on the components.
On the factories they dip the whole board in a bath with molten solder, but it’s just for a split second.

Thank you for your advise gentlemen!

However I am not good at manual exercises like repairing this ECU myself. Could you recommend a professional to do it? I am based in France.

I will try to attach a picture.

Nice pic of the outside of the box. Now take that cover off and post a pic of the inside.

However I am not good at manual exercises like repairing this ECU myself. Could you recommend a professional to do it? I am based in France.

Roger Bywater
http://www.jagweb.com/aj6eng/index.php
but, unfortunately for us, he is in the US.
The easiest might be to find a good second hand unit.

Where are you in France?
Good luck.

Bywater is in the US? Since when?

Don’t know why I had this impression, cause big letters on the bottom of his web page: England.

Hi Kirbert and Aristides for your valuable advise!

Something strange happened: my problem disappeared on its own so far. The engine does not stop anymore and starts normally when cold or hot. I am afraid of being overoptimistic, but so far so good.

I am trying to find explanations to this miracle and can only envisage that the car needed a good healthy drive to recharge all the electronic parts (including capacitors in the ECU potentially) and provide signals to the ECU that all is fine with the engine. After I drove the 500km from Nice to the South of Corsica and left the engine working for a couple of hours while the car was immobilized, the problem seem to have evaporated on its own.

As I think I said initially, before the problem appeared initially, the car stayed immobilized for some time before the issue happened: 6 to 8 months (after this, the accumulator was completely flat), 6 months (I disconnected the accumulator to preserve it), then 1 month, then 3 weeks. Do you think that those long periods of immobilization may have caused the electronics of the ECU to discharge and disfunction?

I meant: thank you for your valuable advise)

Don’t want to disappoint Antoine, but electronic parts don’t fix themselves… disconnecting these kind of modules has no effect, and they should work a few milliseconds after re-connection.
If it’s indeed the module that is causing you trouble, maybe a cold/intermittent joint/contact that somehow with heat expansion/contraction decided to stay put? This doesn’t mean that in the future it will not decide to break the contact again and leave you stranded in the South of Corsica.
I am not familiar with your engine, but if it was me I would want to know what and why it’s happening.
A replacement module, at least as a spare, just in case, might not be a bad idea.

Unless there was something else that was causing the problem to begin with.
All the best.

Hi Aristides! Wise advice indeed. I will try to find a spare ECU just in case. Would you have any idea of a supplier who could have it available?

Do you think that it would be compatible with my engine?

What is the difference between the two?

Have you tried talking to an official Jaguar workshop about this? I think they would have access to this information.