Finished wiring a 16" Derale electric fan onto the radiator to replace the yellow clutch fan a few weeks ago. I wired it to a non-switched source. Originally, it came with a 180F on and 165F off NPT switch that I put in the NPT that was vacated when I removed the air pump stuff - A bank, rear. I have a battery kill switch in the trunk, so if I think the fan runs too long I can manually kill it, which is why I wired to the non-switched.

With that low of a shut-off and on a non-switched source, the fan ran forever and never shutoff - well at least in the 10 minutes I allowed it to kill the battery. At 180F it comes on even before the smaller, original aux fan.

I next tried a 200F on and 185F off thermostat switch, thinking that would be a better solution. Comes on after the aux fan, but still ran at least 30 minutes after the car is shut-off.

I ran infrared temperature checks as best I could and the temp after about 2 minutes of the car off and the fan still blowing, read from 186 down to 172 - which shoulda cut the temp off.

I’ve got more diagnostics to do to figure out, but the first one I thought about was maybe the temperature really does stay about 185 for a long time where I have the probe positioned on the A bank.

Pics first, then any thoughts would be greatly appreciated! 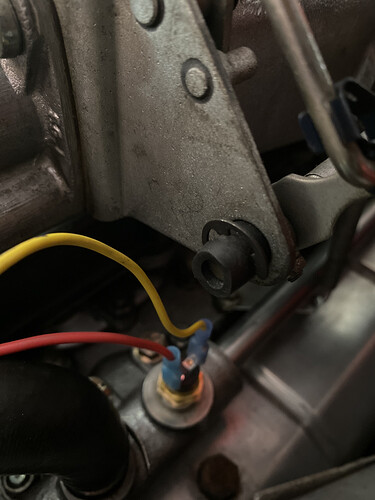 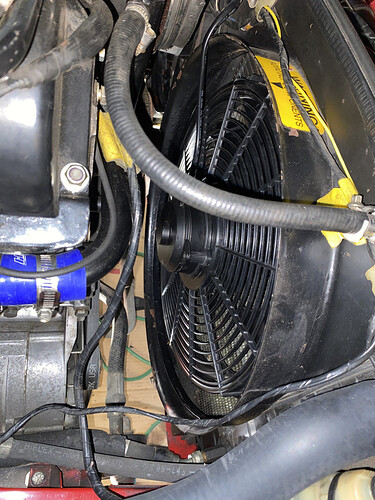 The problem is not the switch but it’s location.
As it’s mounted on the water rail it will stay hot for ever, there is a lot of residual heat and the switch will not turn off until the entire block cools down, and is taking a very long time to do so.
Either you connect the fan to a switched source, either you mount the switch somewhere on the the radiator. You could even use the existing switch for the Aux fan.

I also see that there is a huge gap between the fan and the shroud.
You should close that because this way the fan is just recirculating hot air from the engine compartment.

With minor drilling and tapping, you could put your switch here- “B” bank thermostat housing. 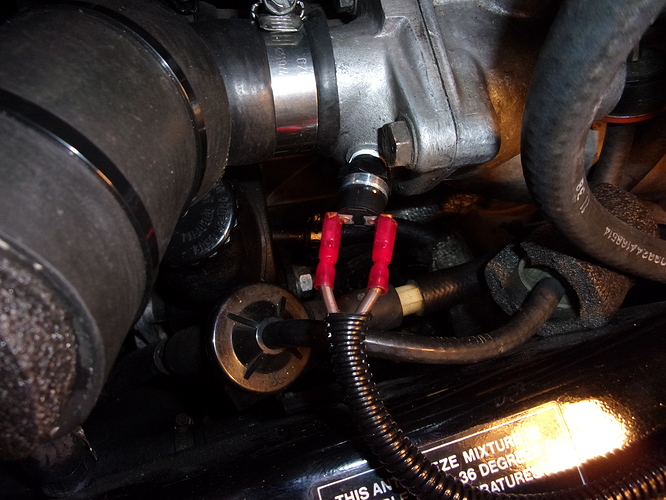 I bought a Derale 16769 adjustable fan controller for my car, wired in parallel with the temp. switch for the aux. fan, and placed the probe under the hood so that it responds to air temperature, not coolant temp. This helps deal with the heat-soak underhood temps, but the possibilities are endless.

I also see that there is a huge gap between the fan and the shroud.

This seems to be the case, however, the new fan with its own shroud is positioned in the old shroud (now defunct). This can actually be taken off, I guess.

While I am a fan of electrical fans (lol), we seem to underestimate the air flow of the original fan and replace with less capacity versions ones. Bear that in mind.

I’ll probably look at fabricating a seal, but as it stands, the fan produces as much if not more good air flow over the motor as the clutch driven fan. It’s rated at a little over 2100 CFM.

I think I’ll look at wiring to the aux fan first. That open NPT port was just too good to be true - so easy to access and just begging to be used. I wonder if I can put it to use for something, maybe a gauge to measure the high coolant temperature.

we seem to underestimate the air flow of the original fan and replace with less capacity versions ones.

Not me… and can’t see how an electric fan can do more.

If you still have the thermal valve you removed from the port you like you could use it again to make an adjustable fast idle scheme for when the engine is cold. (Depends on how well your AAV works.)![ 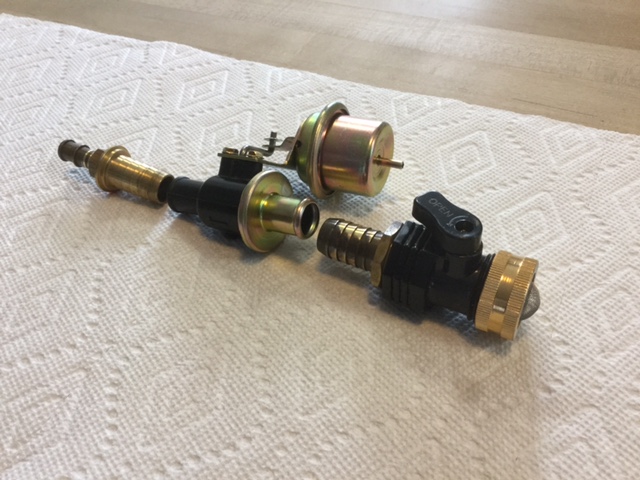 The thermal valve is open when cold, and closes as the engine warms up. I ran a vacuum line through it and hooked the vacuum line to a N/C heater valve. All the parts you see in the photo are joined together with short pieces of 5/8 heater hose, and the whole thing is tee’d into a 3/8 existing supply line below “A” bank, which normally allows more air from the supplementary air valve. The funky hose shutoff in the photo means that you can adjust the extra air for the fast idle you want.

So ended up getting a radiator hose adapter with a 3/8" NPT port (Auto Meter 2282 - cut the 1" connector off). Stuck it on the A bank top coolant hose. Uses a 200F on/ 185F off thermostat switch from AmericanVolt. Main fan now kicks in just a few seconds after the aux fan kicks in at idle. After a hard run and engine off, aux fan and main fan both shutoff about 20 to 30 seconds before kicking off.

Wish I had taken pictures of the before and after on the adapter. It’s actually 5 inches long and fits both 1" and 1.25" IDs. At 5" that adapter no way it fits nicely on that hose, so I just took the hacksaw to the 1" extensions. After hacking those sections off, it’s just a 1.25" adapter (of course you take your dremel to it to clean up the hacking). At about 3" it fits nicely into the coolant hose.

I mounted the switch under the hose thinking that there might be some anomalies with air pockets if mounted at the top of the hose, figuring having the sensor at the bottom of the hose would be more consistent with temperatures. 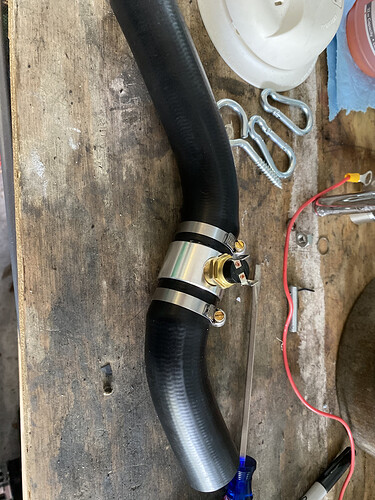 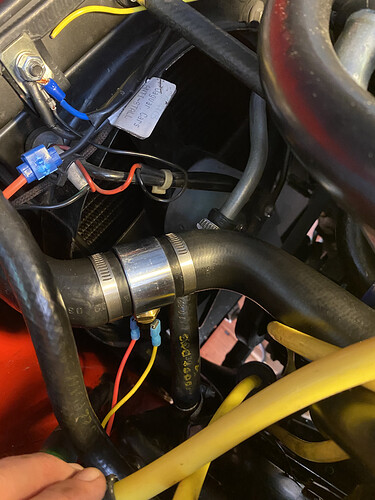 If you still have the thermal valve you removed from the port you like you could use it again to make an adjustable fast idle scheme for when the engine is cold. (Depends on how well your AAV works.)

So - I took out the AAV and removed the filter housings with trumpets to increase the overall air flow into her engine, so don’t have any problems with fast cold idling:)

For the NPT port that is so easy to get to and see, I ordered a high-visibility plug that has a window so you can see the fluid - figured it’d be fun to see if that was useful at all until I found a better use for it…

Not sure I understand why you removed the AAV, or removed the filter housings with trumpets. Was there a problem with the fast idle? And just so I don’t get more confused- you placed the switch adapter in “B” bank, not “A”. Correct? One other thing- consider removing the blue crimp connector shown on your photo, and re-doing it. They are unreliable.

. I totally got myself confused. I like the idea of having the adjustable cold idle. I actually cleaned and tested the AAV and it’s operating great. I removed the air pump, not the AAV, doooh.

I put the new switch on the A bank with the reasoning that the aux fan switch I believe is also on the A bank. The result is what I wanted though with the fan shutting off about 20 seconds after the ignition is turned off.

What would be the benefit of moving it to the B bank hose?

Thanks - sorry for the muck up

Jeff, the photo shows “B” bank, which is driver’s side on a LHD car. The aux. fan switch is on the front of the engine, close to the water pump. It senses the temp. of the coolant returning to the engine through the lower radiator hose.

And that’s my dyslexia going again, can’t get my lefts and rights straight. I prefer pointing, yes, it’s that way (pointing to the B bank).