I’m sorry to have thrown so many new topics up to the forum in the past couple of days. I am really working hard on this project and I’ve multiple tasks underway simultaneously: wiring, defrosters, starter, radiator, distributor, etc. I am wanting to turn it over soon but I want to do no harm.

I can get a number off the piston tops if anyone wishes it.

The following pictures are the first time the cam covers have been off this car since I bought it in 2003. It’s a '63 S1 FHC. Engine was totally rebuilt…presumably. So far what I see looks encouraging. I’ve looked inside the sparkplug holes and all looks very clean. Sparkplugs still have the paint from painting the block/head on them. The exhaust ports look fresh. I haven’t pulled the intake as yet.

What I see below is clean cams and assembly lube. The chains mostly appear dry but leave an oil mark if you touch them. I plan to oil everything. Please tell me what you see or notice? 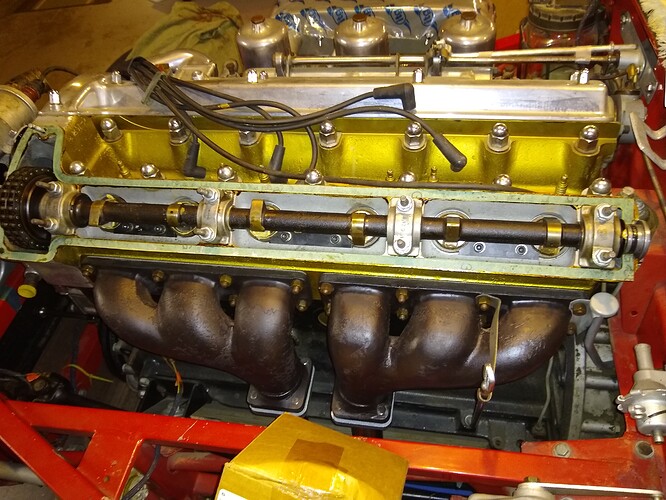 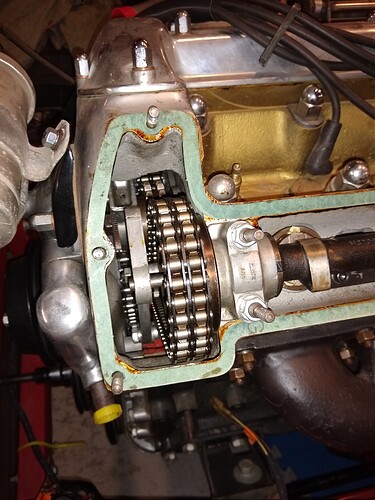 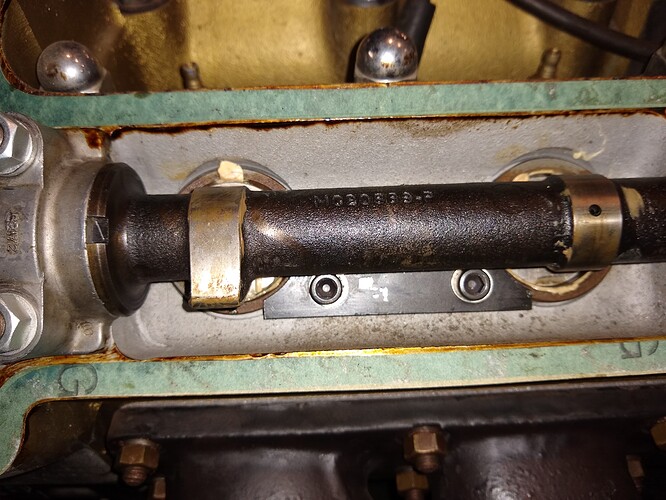 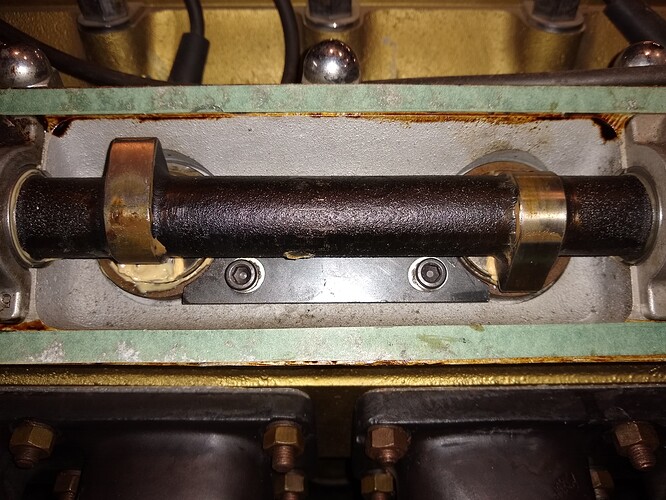 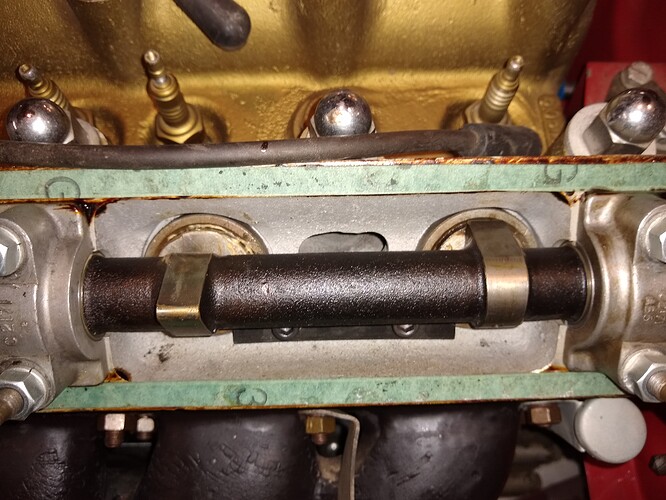 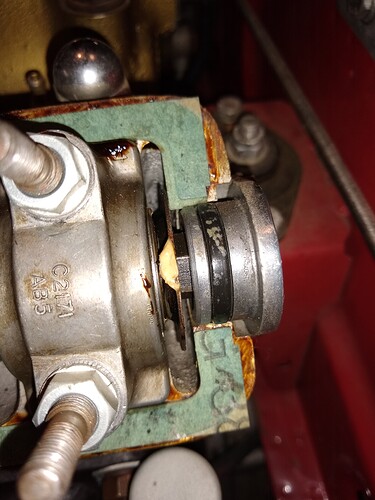 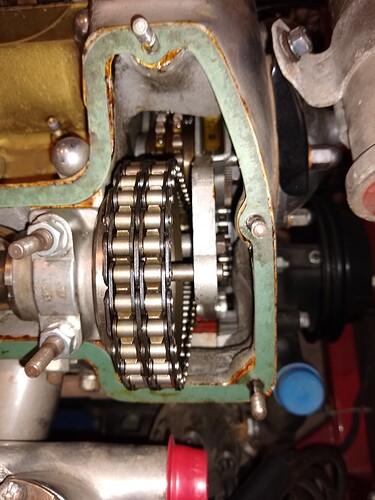 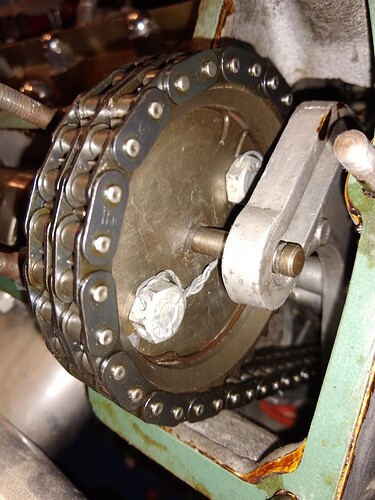 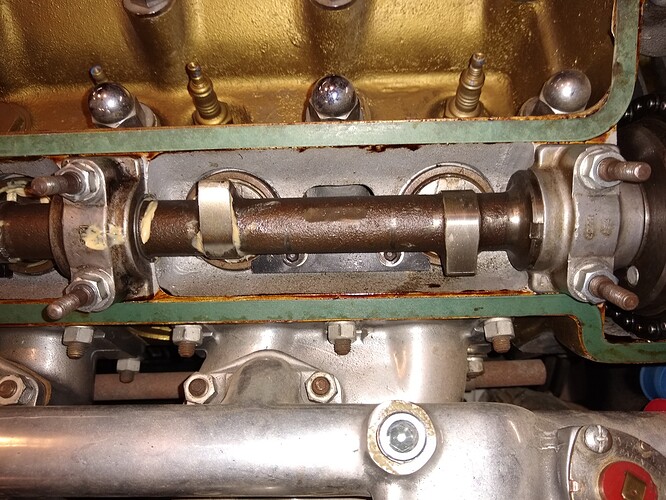 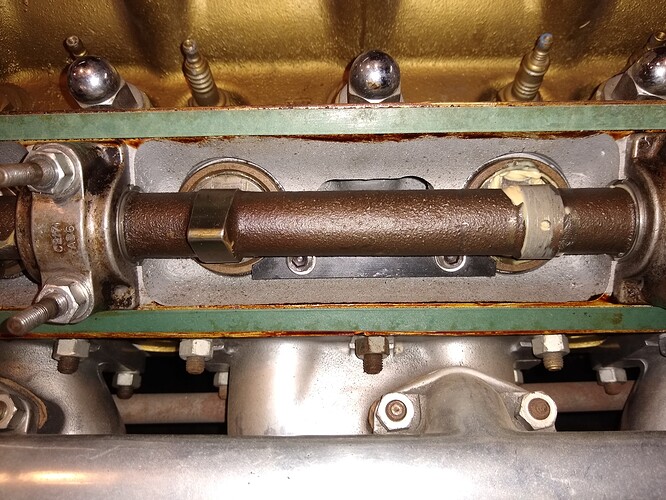 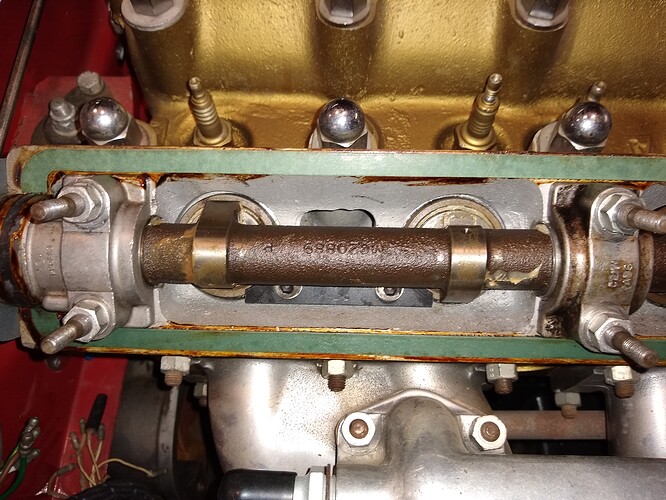 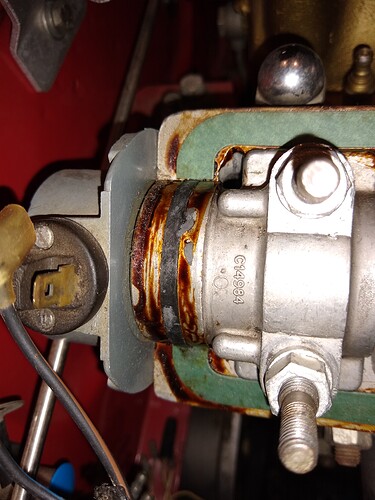 I suggest cross posting this over on the XK engine forum to get the most eyes on it. At a glance I think some people will balk about the fact that the builder left out the D-washers on the cam stud bearing caps. This most often happens because it can be challenging to get them started because with the extra thickness the nuts won’t grab on the threads. It’s easy enough to get around that by starting the nuts on a few studs to get it threaded down to the point where the D washers fit on, and then go back and put the washers on the studs you started with.

Since you already have it open, I’d take a moment and verify the timing. I’d verify compression if you haven’t already. Take a swipe on that assembly lube and make sure it hasn’t petrified. If it has then the oil won’t wash it away and you’ll burn out the bearings in no time. Hoping this isn’t the case because if so then you’ll be pulling it apart to clean them and also pulling the pan to remove the main bearing caps.

Before getting ready to start it, go ahead and fill the cam galleries with oil to the point it starts to drain back. No sense waiting for them to fill up, assembly lube or no.

Hmmm. I need to look up D washers.

The assy lube smears nicely when I touch it. So I’m hoping it’s okay. I’ll add oil as you suggest

I can’t verify compress until I get the engine to turn over…there is no starter at the moment either.

I had planned to pre-pump the oil through the galleries before starting, but not before I turn it over by hand. What I’ve done in the past is force the oil through the engine by hand or electric pump. Then crank the engine no plugs, on the starter for 5 secs. Do that several times before cranking in on the starter for 15-20 secs. And do that 4 or 5 times. I’ve had good luck in the past. Still taking advice.

There is no shortcut I know of. Just hit the edit pencil, and select all and copy. Then go to that forum, create a new post and paste it all.

Good deal on the assembly lube. I would have been awful to tear it down.

Dump oil all over the timing chains as well.

SNG Barratt UK | Keeping your Jaguar on the Road

I suggest you put a few tablespoons of oil into each cylinder. The oil will work its way down to the piston rings

Is that a 3.8 thing? Mine (if I understand what you are referring to) just had serrated washers.

The lack of D washers will in no way make a difference in the engine’s performance.

Later engins went to plain round washer with spring washer on top…so no need to refit D washer. …Steve

Okay, I get it. The D washers (or some washers) prevent this:

Yep. If you been reading the thread on E-type you know I have now turned the engine by hand. Big breaker on the damper piulley. Oil in the holes, oil on the chains, I re-applied and smoothed the assy lube on the cam lobes and then poured oil over the whole camshafts. I was difficult to move at first as in it took a lot of force. Maybe 80 lb-ft. But it was smooth, no noise, not rough. Now it moves pretty good. I’ve gone a bit more than one full turn. I’ll move it every hour that I’m awake tonight.

Thanks to all of you!

The lack of D washers will in no way make a difference in the engine’s performance.

The cam journal caps are very lightly loaded, so there’s no need to get hyper vigilant here. The only thing you need to be careful with is that the stack-up thickness of whatever nut and washer combination you use is not thicker than the original combo. If the stack-up is too thick, you won’t be able to get the cam covers to seal.

This engine was never run after it was assembled. If it had been, there would be a pool of oil along the bottom of both cam valleys at a depth roughly halfway up the tappets.

You say that it was difficult to turn over by hand. Did you first remove the spark plugs?

Hi Mike. Because the bottom of the cam cover will hit the top of the stack-up before it seats?

And your right about it never having been run. Indeed, it has likely never been turned over even since it was rebuilt (1995) and certainly not since I bought it from family (2003). But there is oil there now!

It is enlightening how you guys that know look for telltales. I’m getting there! I’ve run a lot of rodeos, but I think this might be a Rugby match!

Because the bottom of the cam cover will hit the top of the stack-up before it seats?

Yes, that would be the risk.