I’m now getting to the stage of engine reinstallation on my 140DHC restoration, and would appreciate some tips. I’ve done a lot of engine/trans installations, but never a Jag of any description. I’m assuming I’ll need bonnet off and car over pit.

1 - Should I install engine and gearbox together, or gearbox (with o/d) first, then engine? I usually do this separately as I get nervous about the amount of weight hanging over everything, but there are no gearbox mounts as such in the XK so it’s not so straightforward. I’m hoping the reach of the crane can cope but obviously that needs to be longer if I have a complete unit.

2 - Are there any components I ought to fit before installation? I have head, cams and covers, water pump on, but not much else to keep the weight down. Manifolds etc. are easy enough to do afterwards. What about the 140 clutch shafts etc.? Can the entire clutch operating mechanism be installed with the bellhousing in place? Last thing I want is to find I can’t get a shaft in with the motor in.

Two ways to do it; from the top or from the bottom.

Here’s a typical install from the top: 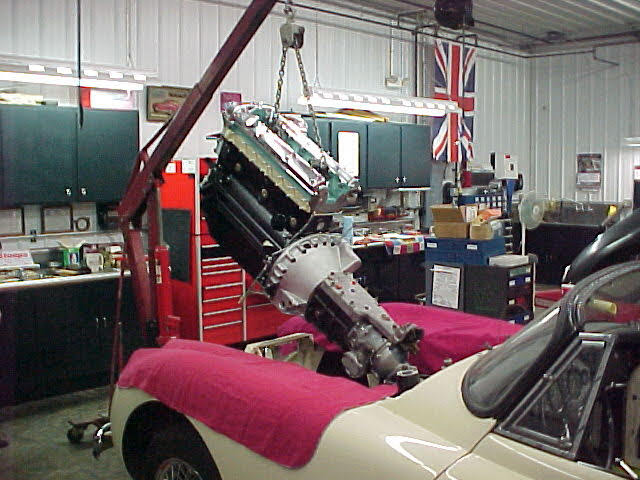 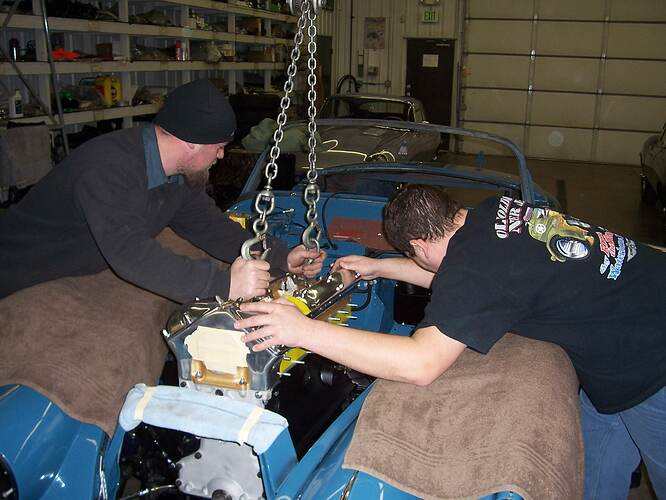 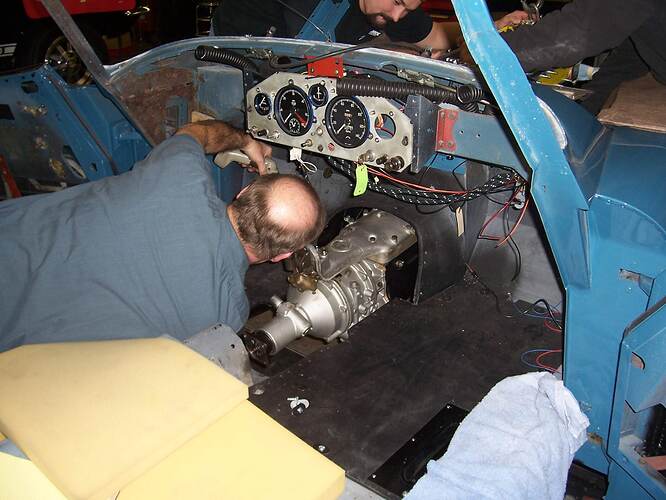 And here’s a video of an install using a lift.

I use an engine hoist as my garage is too small for a lift.
My tips:
1 - I found that taking the top cover off the transmission helped with clearing the firewall.
2 - Same with the cranksahft damper
3 - I had the starter installed prior
4 - I use a little furniture dolly under the transmission end as the engine shoehorns in
5 - I use hoisting rings from an XJ6, I think they are better than the early MKII type
6 - An Oberg engine tilt helps tremendously
7 - I have the car on the ground and roll it under the raised engine vice rolling the lift over the car. It keeps the engine stable.

Not too long ago, there was a post on the pros and cons of top or bottom. There were some good tips in that. Oh, and have I have done it by myself but wouldn’t recommend it. For my 150, I plan to have at least two helpers.

Thanks for that David, some good tips there. I’ll stick with from the top as I don’t have a hoist for the same reason. I usually install engines over my inspection pit, then I can use a transmission jack down in the pit to raise the tail end of the assembly. Starter first is a good tip, as is removing the gearbox top cover, but not sure I want to fight with the crank damper now that’s fitted and torqued. I hope that’s not quite such an issue in a 140 as the 150 has that large radiator frame up front.
I haven’t found any hoisting brackets for Jag that fit - I don’t think I’d trust repros of the aluminium ‘hoops’, and the HD pressed steel ones I bought don’t match any of the headstud spacings (transverse or longitudinal), so it’ll probably be a couple of bolts threaded into suitable holes as usual. 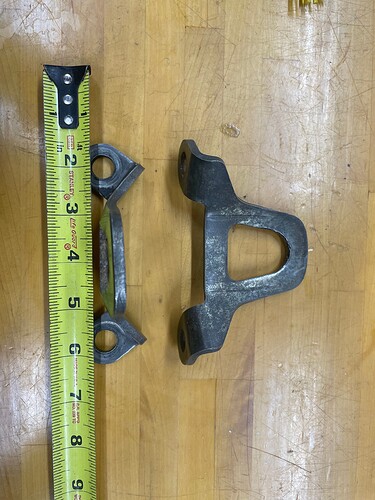 Just make some or modify those ,looks like you’ve got a well equipped shop ,welder?

Thanks David, I’ve found a pair of used ones cheap.

I have Jim, but as a one-man-band the tricky bit is time!

Off course
On my etype I’ve made notes to my self
Remove the damper and water pump for clearance on frame. The more vertical the engine the easier it slides in ,rotate the transmission up as it goes
Cheers

After completion of the restoration I had to take out the engine and re-install it once more.
I kept engine, gearbox and overdrive together and it is feasible (but not easy) as it probably is the longest combination there is (I guess even longer than the automatic). I did it all by myself with a standard (read: hobby) engine crane. This was in an XK 140 FHC which is very cramped in the front and it was a tight fit to get the engine over the “cross bar” at the front while the overdrive was meanwhile entering the cabin under a very steep angle…
Of course radiator out and also the gearbox tunnel out. You also have to remove the upper cover and gear stick of the JLE gearbox and cover the opening. I believe you have the DHC which should be easier with more space in the engine compartment. 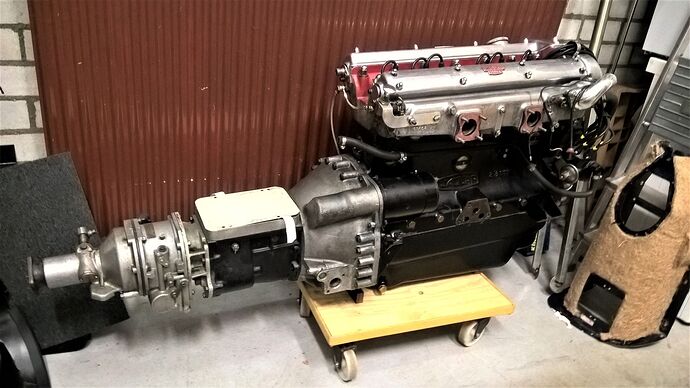 On an XK120, removal of the stiffener between the two inner fenders greatly eases remove and installation. Is the sheet metal brace on an XK140 removable? I also use a rolling jack under the assembly to aid in managing the tilt and location.

I won’t ask why it had to come out again, Bob - the memory might still be painful!
I can remove the gearbox top, which is taller anyway being an overdrive 'box. I was going to fit manifolds after installation, just to keep the bulk and weight down. I was hoping not to have to pull the damper (there’s no pulley on it) - does the damper alone really make that much difference?
The front crossbar is technically removeable, but I don’t want to do that either as it will affect the front body alignment. Actually it’s never been removed, having been in place throughout all the body repairs. There was vitually no metalwork required ahead of the bulkhead and I didn’t want to disturb panel alignments that were still good, so left it in place. All the engine bay side panels have yet to be installed, and I have the seats, carpets, tunnel, floorboards, dash centre etc. all out as well.
I usually do engine installs myself - the most challenging was probably the Jensen Interceptor’s 440 Chrysler, squeezed into a European-sized engine bay - but as this is so long I’ll get a helper in. It’s a good excuse for a beer and a curry afterwards, too, in time-honoured British Friday evening fashion.

does the damper alone really make that much difference?

I too did the install by myself. It was the pully that hit the frame crossmember on install. So I lifted the engine back out and took it, the damper, and the trans top off. Without those, the second attempt went much, much smoother. I am not going to do a solo install again though, too risky.

I think you may be able to leave the damper on if you have the pully off. Taking the trans top off will also help.

a beer and a curry afterwards, too, in time-honoured British Friday evening fashion.

Oh boy, does that bring back fond memories !!!

a beer and a curry afterwards, too, in time-honoured British Friday evening fashion.

Oh boy, does that bring back fond memories !!!

The same friend first helped me with heavy engine work in around 1980, when I finally decided two pairs of hands were better than one. The standard routine was do the job after work on a Friday, then walk down to the Oliver Cromwell for 2-3 pints of Adnams/Greene King/Wadsworths/Courage*, then into the Kushiara for a Chicken Jalfrezi. What’s not to like?

*delete as appropriate, or maybe one of each…

Could I ask a couple of supplementaries?

1 - there is a rubber buffer to screw to the rear crossmember under the overdrive unit. Should I fit this before installation, when I can get to it easily, or will it get in the way of the output flange during installation? I presume it can be fitted after.

2 - Should there be a paper gasket between the gearbox and the bellhousing? The parts book seems to show one, but the gearbox restorer has fitted the rear casing with the oil seal already, using a gasket under the oil seal housing only. The gasket supplied by the specialists looks to go under this housing, so it would need to be removed and refitted. Not sure I want to do this. The 8 mounting bolts are in blind holes so the only part that could leak, as far as I can tell, is the end of the countershaft which can be seen below the input shaft. I would normally use a thin bead of RTV around this anyway to stop any leakage. Will that work?

then walk down to the Oliver Cromwell for 2-3 pints of Adnams/Greene King/Wadsworths/Courage*, then into the Kushiara for a Chicken Jalfrezi. What’s not to like?

Maybe the drive back home?

Well. I remember a party at a friend’s house many years ago. Some guy was in the kitchen preparing in a blender a massive quantity of a cocktail called mudslide (vodka vanilla ice-cream and more} I had never heard of it and he poured me a large glass. You can’t detect the vodka in it from the taste and it’s very pleasant to drink. So, I had another glass! I was fine for about a half hour before the high-octane concoction kicked in. I remember 3 attempts to climb a flight of stairs to reach my bedroom, been scrutinized by 3 bemused little dogs watching my efforts. Enough said and sorry for deviating momentarily from the engine installation topic. By the way, I really enjoy English beer whenever I visit the UK.

Let me know next time you do, Bob!

1 - when installing, what’s best to do with the engine mounts? Fit to engine before installing, fit to chassis, fit once engine’s in position?

I have the rear engine brackets mounted with the rubber pads attached loose enough to move, front brackets on but without rubber pads.

Once the engine is in, the front pads are fairly easy to fit and tighten. Not so with the rears. There is little room to get a wrench on the big bolt.