Shucks. I need some help understanding what is going on, so please give me your opinions and advice.

The engine seems to run pretty good, idles smoothly and is responsive to the throttle. It does not smoke on starting. However as the water temperature increases, it starts blowing blue smoke. Quite a bit of blue smoke. The engine has not exceeded 185F (70C mol). Oil pressure is 60 psig (2 gauges).

I have run it now about 5 times, varying the speed from idle to perhaps 3000 rpm, no load. I’ll hold it steady, say at 2500 rpm, and increase that to 3000 rpm, then back to idle and then increase the speed to 3000 rpm. A couple of times I have blipped the throttle to 4000 rpm and let it fall back to idle. Altogether the engine has maybe 15 minutes of run time. I have a temporary fan belt running the water pump from the crank; it turns the water pump, but it is very loose. If I let the engine get up to near 180F, it will make a lot of blue smoke (not white). I have now ceased starting it until I determine a path forward. 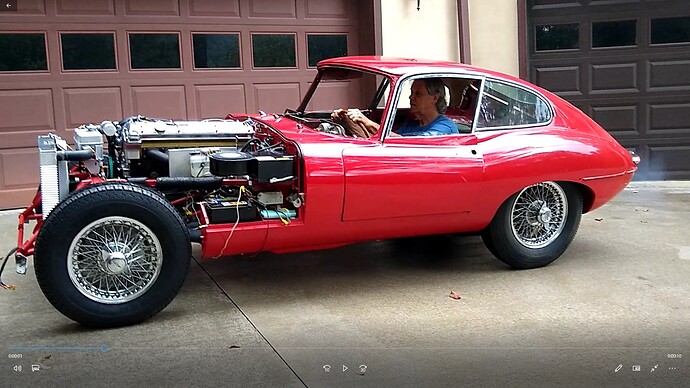 I have never had an engine smoke like this on initial startup and it bothers me greatly. It cannot be driven on the road at this time. Questions: What is the problem? What can I do about it?

This is a '63 E-type 3.8 FHC coupe. The engine was built by a shop between 1990 and 1995 and never started or even turned over as far as I know. I have spend considerable time (the past 12 months!) going over the engine without pulling it. I did not pull the head, but I inspected the bore, checked main and rod journals, the timing chain, set the valves. On August 19, it started right up. It idled very fast and I’d guess it was running between 2000 and 3000 rpm. I got that under control fairly quickly.

Before you ask, I did not build this engine. I do not know what the cross hatching technique was. I don’t know if the rings are chrome. I did look at the cross hatching with a borescope and it was visible and that is about all I can say. I believe the pistons are new but I do not know if they are oversize. There is no discoloration on the pistons (top or bottoms), combustion chamber, flow passages, etc. The number on the piston top is: J06 P39 -508. 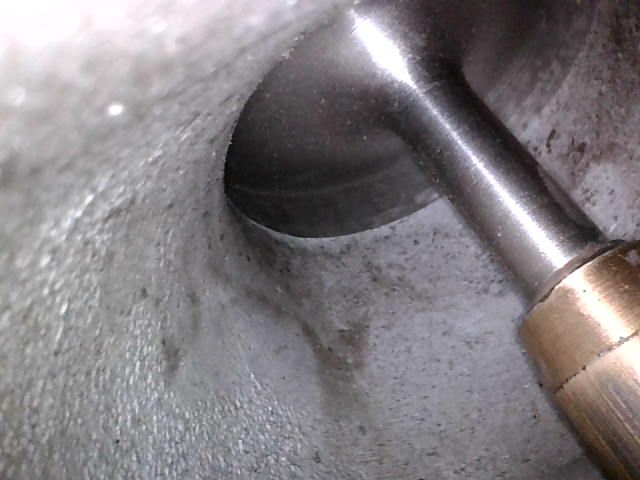 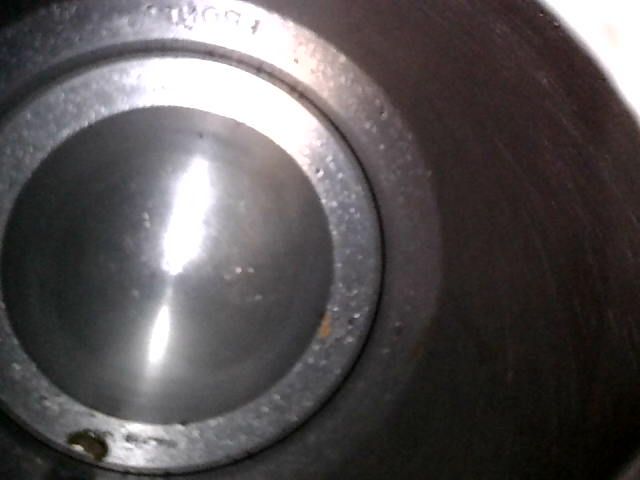 There are three ways for oil to get into the exhaust: the valve guides and past the rings.

The valve guides would produce a lot of smoke on startup. They look fine to me.

The rings smoke especially under load and you should take the oil filler cap off and look for excessive blowby. Look at the spark plugs and see if there are a few oily ones. Your piston looks oily and not as if it’s been to temperature yet.

It could also be a puddle of oil that has collected inside the exhaust and burns off when the exhaust gets hot. That would fit in very well with your symptoms.

If possible this needs to be driven until it is really hot. Then see if it’s getting better. Idling is the death to any new engine so I say leave it at that until you can drive. 15 minutes is not an issue though. I don’t think the bores could be glazed after that little time. Maybe the rings are stuck a little or something. It has to make some heat and see some load.

I’d put some mikes on it, and see if the rings seat.

If:
-the rings used were chrome, and
-they were not used in Sunnen-honed new bores, it’s likely they will never seat.

Driving instructions - high load, 1500-2500 rpm or so?
Why would it only smoke when getting warmer, is that normal? Just wondering

Not a clue: engines sometimes do weird stuff.

And that reply my friends, is from a mechanic! What are we poor mortals supposed to do!

Thanks guys. I really didn’t relish the idea of publicly announcing the engine is burning oil, it’s embarrassing. Nonetheless, it is what it is and I need a go-forward plan.

The pictures were taken before I started the engine. When I first determined to turn it over, I put a tablespoon of Shaler Rislone in the plug holes and turned it by hand. The pistons were wet because of that. I took pics of all the valve guides I could get to and just uploaded one as they all look the same. I was just showing the engine was clean and had obviously been worked on (back in 1990).

I understand that there is a possibility that the scraper ring could be installed upside down? That would route oil up to the combustion chamber vs. down to the crankcase.

I did not state what oil I used but it is Shell Rotella straight 30 wt. I put a pint of Lucas ZDDP Engine Break-in as well. I didn’t feel it was necessary as the engine is not a push-rod motor, but I had 8 qts of the Rotella and thought the Lucas oil additive would not hurt. I am still of the opinion it is not an oil problem, but rather a ring seating problem.

I did not have the oil filler cap off, but I do have the blow-by pipe with the filter end open. When the engine starts to smoke out the exhaust, blue smoke comes out of the breather pipe too.

I have read much recently on chrome rings and their difficulties breaking them in. Some say no difference and others say you need many miles - several hundred even - and you need to load the engine. Well I can’t do that until I put it on the road.

Why would it only smoke when getting warmer, is that normal? Just wondering

And that is a good question David and Paul has a good answer.

So, I am inclined to not start it anymore until I can get it on the road. Unfortunately that will be a long time. Bummer. Is this the reasonable go-forward? Leave it alone until I put some load on the engine?

Do you all think it would be doing harm to run it as is while I finish the alternator project? I’d like to get the pulleys and belt settled and see that I’m generating current. That needs to be done before I drive it.

When the engine starts to smoke out the exhaust, blue smoke comes out of the breather pipe too.

That strongly suggests a ring issue: if it doesn’t dry up in a couple hundred miles, it’s likely going to be necessary to pull the head, pan, and inspect the rings.

You will not harm it by running it, and yes, Id not sweat it till you can put some miles on it.

My thought too. Blow by is getting past the rings. dagnabit! Well I guess time will tell.

A leak down test would be interesting, with a listen at where the air is coming out. Plus did you repeat the compression test with a bit of oil in number 6 for a better ring seal?
SAJ in NZ

Maybe the battery got low but those are good enough compression values regardless; don’t start it until you can run it, and give it some throttle then. It’s a new engine after all.
A lot of blowby corresponding with the blue exhaust rules out my exhaust theory. I thought that was a pretty good idea, what a shame.

Hi Stuart. No I did not do a leak down test. I don’t have the tool and at the time I did the compression test I talked about it on J-L and most thought it wouldn’t be worth the effort. That was then, now maybe so. I also did not do the compression with oil in the combustion chamber. I felt the 160 psi was good on its own merit even though it was off relative to the other cylinders. I may redo the compression test, wet and dry, now that the engine has run.
David, the battery had a battery charger on it, so it wasn’t cranking slowly. Besides, I repeated the compression test several times and always got the same results.
On the blow-by coming out the breather pipe: it is a bit noticeable when the engine gets warm. But the exhaust is very, very noticeable. Both the pics that follow are with the engine being revved up. The first pic is on the very first start and the engine is still cold and being revved to maybe 3000rpm. The second pic is the next day and I had turned the car around to put the exhaust out the garage door; the engine is probably at 70C, revved to maybe 3500rpm (not very aggressively) in an attempt to record the exhaust sound. (I don’t know how to post videos…if anyone does?)

BTW, the exhaust system was all brand new except for the headers. SS with no packing in the mufflers. It is not loud. 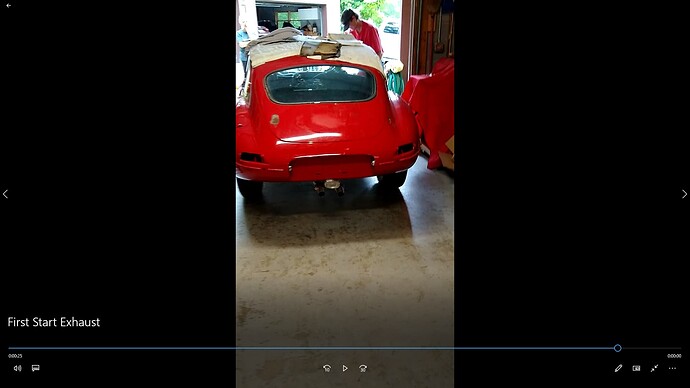 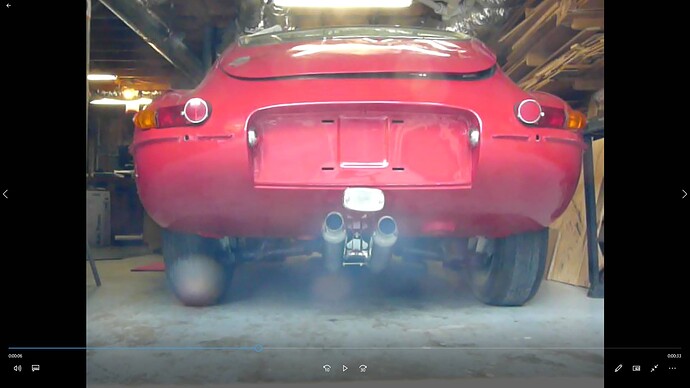 Okay. I was afraid of that. My wife’s account at Google took over my YouTube account and I haven’t been able to access it for over a year. I’ll fix that and upload the video. Thanks.

It’s not too much of a stretch to envision a stuck or broken ring in #6 Why don’t you put a tablespoon or two of Marvel Mystery Oil in each cylinder and let it sit for a day or two. It’s a Stoddard solvent and if a ring is stuck in the groove from sitting…couldn’t hurt. Unlikely stuck on a rebuilt engine but MMO is inexpensive

It’s not hard to bust a ring when going on and off pistons. One never knows what went on that piston if one of a set was broken.

I can say that Total Seal was willing to sell me one 1st over ring, I didn’t have to buy a set of 18.

I’ll do that David. I have MMO around anyway, so it won’t be much of an effort. I will say though that for the past year, I had Shaler Rislone in all the cylinders. I had placed a tablespoon in each way back when I was first attempting to turn the engine over and so the cylinders so a good bit of upper lubrication for a year. And, when I first got the car, I had put a tablespoon of oil in the cylinders. Still, it is a good idea.

It had talked about doing a leak-down test a few months ago and as I didn’t have the tester, I didn’t do it. They are not very expensive and I certainly could buy one if the group thinks it might yield some information.

They are not very expensive and I certainly could buy one if the group thinks it might yield some information.

Great diagnostic tool: that, and its purchaee will further enter you into The Mysteries.

Scott, I think this is the one I bought…reasonable enough… Cylinder Leak-Down Tester

Plus, aren’t you somewhere in Georgia? If you are close to Atlanta, I could make a road trip. JS 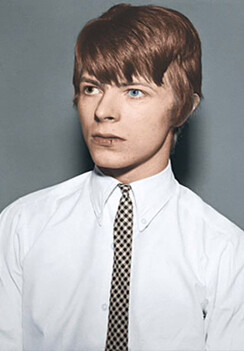 No Jeff, I’m in Franklin, NC. Dick Maury had offered to lend me his tester, but I really didn’t see the need and a long talk with Wiggles back then further convinced my. If I do it, I’ll just use a HF Coupon and buy it local. Thank you for the offer though. Scot