To someone who hasn’t used one before , I do wonder how the weight of a jaguar engine cantilevered out on half a dozen bolts can remain without something breaking . So how are they attached , and provided they have four wheels and are more than robust enough for the job , can any one be used for a jaguar engine ?

You should look for one with legs that are spread far apart as rotating an XK engine can cause a smaller footed one to tip over as you rotate it. And as for leg, they should extend as far as you can find. As I recall, the front legs on the one I used were spread about 36”

Tons in the archives about this.

I noticed Larry Schear recommending care in fitting a Jag engine to an engine stand, due to the long heavy block putting excessive loads on the head of the engine stand. A few years back (then) Jaguar Quarterly did a series of articles on an XK motor rebuild. I noticed in some of the pictures they had a piece of square tube with what I assumed were old motor mounts welded to each end, and atached to the engine stand in the middle. When this bar was bolted to the left side of the engine, …

Kenny,
How about a side mount bracket that takes away the off balance weight to the engine? In this attached link from The ‘E’ Type Forum the poster has developed a side mounting bracket that is being sold by SNG Barratt. If you are a good enough fabricator the poster describes how to build it yourself.

Kenny
Don’t use a cheap Chinese one it will just bend . Mine was well built more commercial
I bolted mine on with 4 bolts in a semi square pattern and greased the pivot to make rotation easier . It’s not to bad until you install the head I had carbs and exhaust manifolds on alternator, water pump. You could always fabricate a support I didn’t because it will interfere with rotation
Cheers Jim

Hi Gary , I can stick two pieces of metal together using electricity , but I am most definitely not a welder . I thought about supporting the end of the engine in a sling hanging from my chain block , just in case .

During work on your engine you will want to twist and turn the whole thing now and then, any extra straps will only hinder this. The SNGB one is good. I had built one before they had that available. Mine worked fine. Heed the advice to mount the engine weight balanced as good as possible. Turning it over by yourself will otherwise be heavy. These are the only pics I can find atm. Most work was done with the block level. I should have measurements somewhere if you want to copy. It allows to assemble the head and the oilpan. 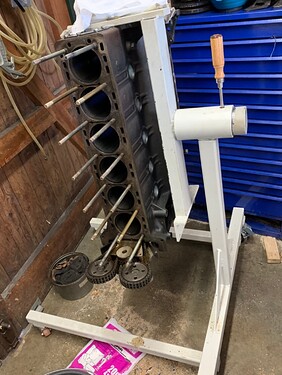 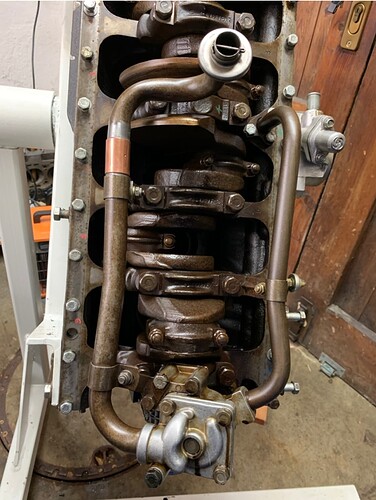 That is an excellent design, and the optimal way to do it. The ones that align with the crankshaft are certainly workable but a side hold like that one is better.

Martin, I would really like to see those measurements you have to fabricate one myself. Thanks in Advance, Gary

I‘ll research them the next few days and get back here.

I think we worry too much about this. Has anyone actually seen one fail? I’ve got a big-block Dodge 440 mounted to one of the same the same stands I used for every XK six. Still only four three inch long 3/8" bolts.

I think we worry too much about this. Has anyone actually seen one fail?

The one pictured in @Craig_Balzer’s posts was the one that had hung off its end an Auburn straight-eight, all 1200 pounds of it! Plus, many XKs, more than a few BBCs, and exactly one 270 Offy!

The Lycoming made it sag a bit, but worked fine!

Got mine from Harbor Freight. I did add a vertical wood brace just for insurance. We will 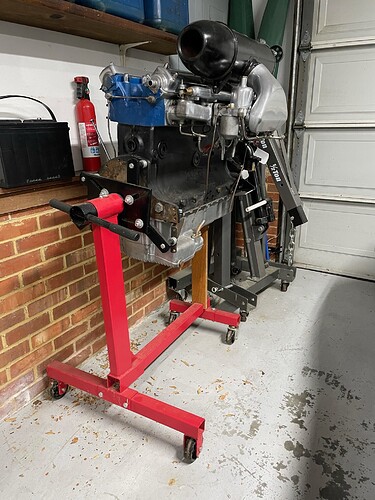 But you wouldn’t want to try and rotate that bugger

I bought my engine stand from Northern Tool maybe 20 years ago. I found it difficult to rotate the XK engine on it to a large degree because of the sloppy fit between the two parts. I cleaned up the rotating part and used sheet brass to line the inside of the length of pipe that part rotates in. Add a dollop of grease to reduce friction and it worked much better. I hope to never use it again.

If I were designing an engine stand from scratch it would employ tapered roller bearings set up like the front hub on a car. 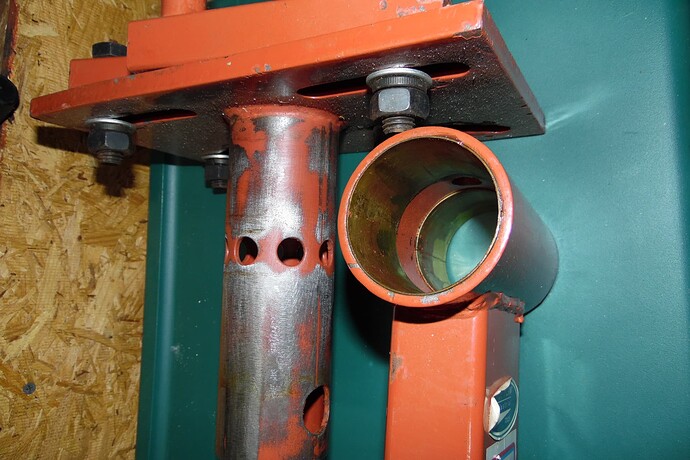 I had plans to do the bearing thing on my engine stand, but never got around to it. I might convince @Craig_Balzer to do the modification on the stand.

Got mine from Harbor Freight.

I did the same, but used a strap with my engine hoist for the insurance.

Actually, I did rotate it to replace the oil pan. You are right that the center of gravity is off and one must be carefull.

The turning inner head pipe with the engine bracket is made as a removable part. It is drilled to set at multiple angle settings. The outer pipe has a downward sqaure pipe into the main stand, lifts up and out of the stand. I can swap that out and exchange for a table or whatever other engine bracket might be needed. The inner pipe has bearings at the rear, helping make flipping the heavy engine a lot easier. I used smaller wheels up front to allow for lower pipes. The larger wheels at the back take the most weight. My garage is really small and the lower the pipes, the lower the risk of tripping. I did have a drip pan sitting on the bottom somehow not in the pics. 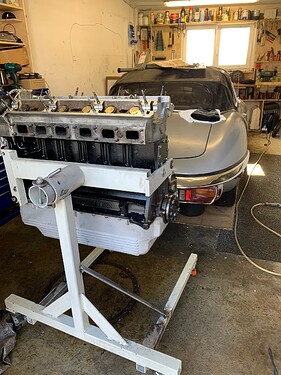 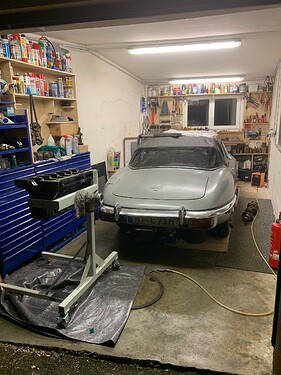 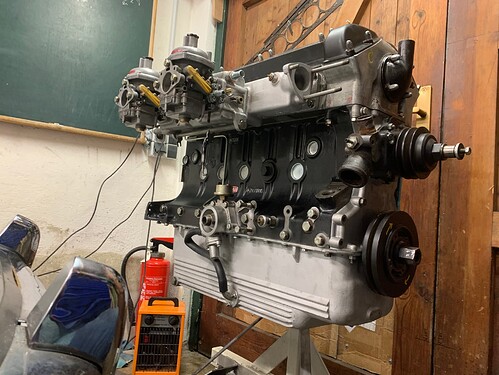 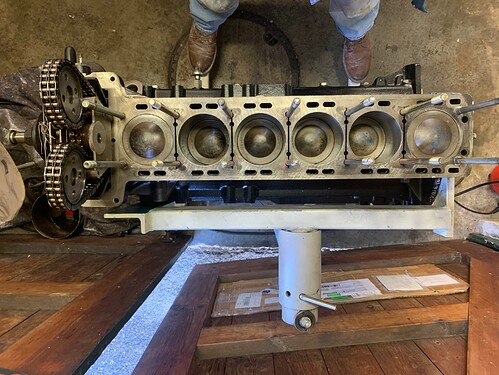 My only modification to your excellent design would be to have mounted the wheels on little “wings” sticking out from the sides of the lower elements of the engine stand. That would’ve lowered it about 2 1/2 inches. That would make it easier to get under things.