I do not want to replace my rusted expansion tank with another one made of mild steel. It is just a disaster waiting to happen and one overheated engine resulting in having to replace the cracked block is enough for one life time.

So I will simply fit a universal coolant expansion tank. Before making the purchase, I thought I would ask you folks for any words of wisdom to guide the choice.

How about this? Aluminum, 2l, pressure cap, crazy discount.

The overflow spigot on the pressure cap faces the wrong way, but not a big deal I think.
It’s missing one connection though, and you also have to figure out the coolant level sensor.
Otherwise, it’s all a matter of space and how to mount it.
Mind you that the pressure cap should be as high as possible for ease of filling.

Can’t see how much the one you found costs, but there is also this one:
https://www.scparts.co.uk/sc_en/expansion-tank-628706.html

Before making the purchase, I thought I would ask you folks for any words of wisdom to guide the choice.

How about this? Aluminum, 2l, pressure cap, crazy discount.

**
Check the connections for compatibility, Eric - and that it can be mounted appropriately. Note the vent lines from the header tank - and the vent line at the cap…

Basically, the S2 expansion tank is under pressure like the rest of the cooling system…

Thanks guys. The one linked above is 1/10th of the price of the SCParts one…

I wonder if 2l is enough (will measure old one this weekend) and if it is tall enough to level with the header.

I bought it, $40 with shipping. Will report my findings

Just for fun, that’s what the 15y old, replacement expansion tank looks like. Only used with coolant…
It was not leaking on the car, but no less than 6 little holes appeared after the first internal clean up with vinegar… 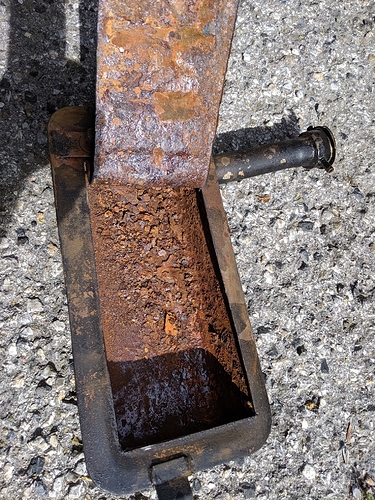 Dis you really have to show this ?
How are we going to sleep tonight ??

sorrry, knowledge is a heavy burden…

When I was working on powering my A Hot rod with a four banger, the sump looked something like that. About an inch of oily sand at the bottom. when I cleaned it up, I saw the cracks and pin holes!! Oddly it was not greasy outside, no leaks?? Sand is a good sealer of holes??

I decided to braze the openings. More opened as I heated it and flowed in the brass. ended up with an
al most solid brass bottom!!!

couldn’t you just start a write-up of your “almost a century with cars”? - And I’m not kidding … a generation growing up not taking a driver’s license but waiting for some AI shuttle to just take them to their destination without disturbance to their so important social media activity will look at your stories in awe! I sure do.

Well, I rushed and goofed up.

I received the aluminum expansion tank. It is extraordinarily beautifully made. I am very impressed, but it is 2 litres only…

Only now do I have the time to do some research and it appears that the volume of the expansion tank should be an additional 18% of the coolant contained in the engine+radiator+heating+ hoses (see breakdown and reference below).

The manual shows a total coolant capacity of 18.2 litres. Supposedly, this includes the expansion tank.

I don’t have the old expansion tank handy to measure it’s capacity, but I am quite certain that it is quite larger than 2 litres.

In any case, at 18%, a 2 litres expansion tank would be suitable for a system containing 11 + 2 = 13 litres, or 5 litres short if the recommended volume for the Jag.

… Or I also fit a recovery tank. That might actually not be a bad idea… engine bay will busy, but may be. 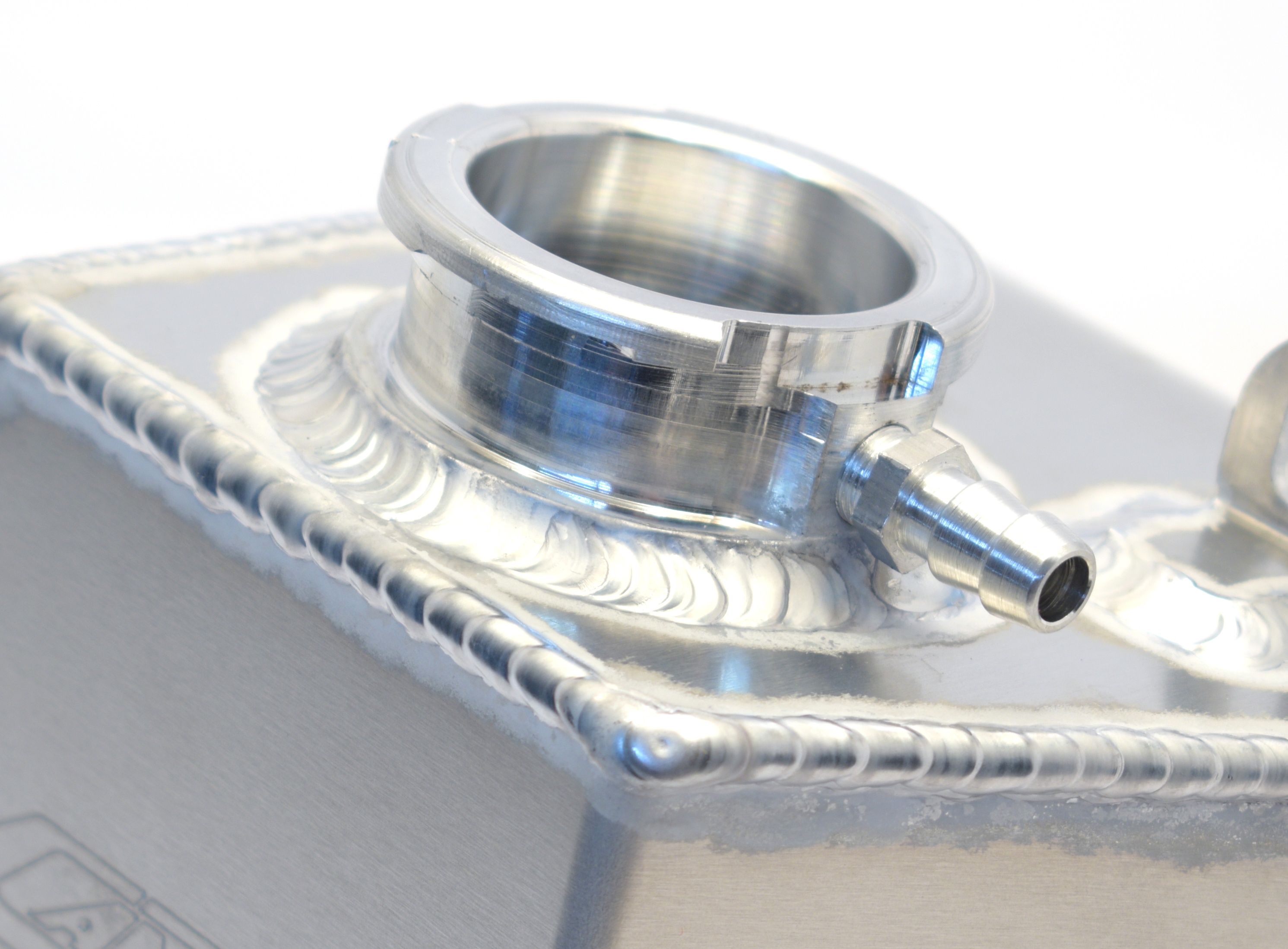 I don’t have the old expansion tank handy to measure it’s capacity, but I am quite certain that it is quite larger than 2 litres.

Just by looking at it, it doesn’t seem to be much larger the 2 litres.

… Or I also fit a recovery tank. That might actually not be a bad idea… engine bay will busy, but may be

Doesn’t the SII have one ?
It’s curious as the SIII V12 does have one and the expansion tank is meant to be always full, the real expansion happens at the recovery tank, it fills and empties at every cycle.
It’s mounted inside the left fender, and I guestimete that it holds 3 to 4 litres.

**
Nothing wrong with your mathematics, Eric…

To me, 18% of system capacity seems excessive - I’d like to see the basis for that advice. It may be based on more than the plain expansion of the coolant…

I would expect expansion, from heating, in the range of 1+ litres - though the S3 expansion tank holds some 3 litres?

It’s curious as the SIII V12 does have one and the expansion tank is meant to be always full, the real expansion happens at the recovery tank, it fills and empties at every cycle.

**
Not so, Aristides - the general fluctation caused by heat expansion is contained in the expansion tank.

Ie, the level in the expansion tank is ‘low’ with a cold engine, and full (and under pressure) with the engine hot. Excessive fluid, ‘overfilled’ system at initial fill, is taken by the recovery tank - when fitted. Earlier versions were not fitted with the recovery tank - the fluid was just vented overboard…

I’m getting confused with the terminology here. Surely the “expansion tank” is the “recovery” tank - coolant expands into it and is recovered from it. The other tank is the “header” tank (which is what I think Aristides is referring to) which is used to fill/top up - being the highest point in the system.

This is the expansion/recovery tank from my 1971 4.2 Daimler Sov (which I spectacularly failed to adequately repair!). My coolant capacity is also 18 litres and the capacity of the tank shown here is 1.7 litres to brim full. I fill it to 50% when cold - it has never overflowed or run dry. 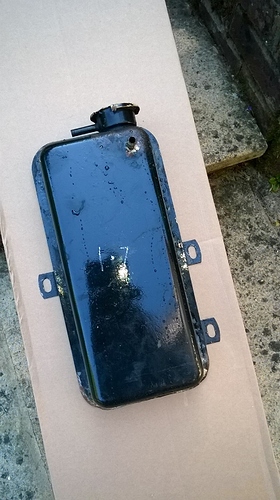 What I am reading from you guys is reassuring: Frankie, since the stock expansion tank is 1.7l, as you say, then I should be more than fine with the replacement 2l!

. I filled it up to measure after I wrote my update and it actually checked out at 2.2l, even better.

So it looks like I should be fine volume wise.

Now to fit this pretty thing will be another story…

I’m getting confused with the terminology here. Surely the “expansion tank” is the “recovery” tank - coolant expands into it and is recovered from it. The other tank is the “header” tank (which is what I think Aristides is referring to) which is used to fill/top up

This is always confusing; the terms are often used interchangeably.

Here’s what I’ve gleaned over the years:

If it’s the intended fill point for a system, it’s a “header”. Remember when almost every car had a cap on the radiator? The cap was on the “header tank”; that’s where you filled the system. Of course lots of radiators don’t have caps, so the radiator’s tanks are just…tanks. Not header tanks.

If you have a V12 Jag you fill the system via a tube at the front of the engine. That’s a header, even though there isn’t a tank. Some 6-cylinder models have a fill point at the thermostat housing and this, too, is a header…but without a tank.

If the system header is a separate vessel entirely, it’s a “header tank”

In other arenas (boats, industrial, farm equipment, etc) you can occasionally see reference to filling a fluid system “at the header”, even if there isn’t a tank involved.

Any tank, apart from the header tank, provided for the purpose of giving hot coolant a place to expand into, can rightfully called an expansion tank. If pressurized with the system the name is probably best left simply as “expansion tank”. If vented to atmosphere it’s probably best described as an “overflow tank” (as that’s where excess coolant overflows to) or “atmospheric tank” (because it isn’t under pressure).

Well, that’s how I see it. I’m not contending that mine are the final words on the matter

Yes, and if the pressurized one gets empty, air will be sucked into the cooling system reducing its effectiveness or worse.

This is the scenario to be avoided.