I think I’m about to do something stupid crazy… I am going to replace my fuel tank. I cannot get rid of the fuel smell after I fill the tank up. It seems to go away when it’s about half full, but summer is coming, and it might be worse than that.

All of the hoses outside of the tank were upgraded to Gates Barricade. Does anyone know what I should prepare for the new tank? I couldn’t find a new tank, so I’m going to have to buy one from a salvage yard.

I recently replaced both fuel sender and evap canister gaskets with homecut Viton gaskets, so I won’t bother replacing those. Anything INSIDE the tank that I should prepare myself for?

I’ll worry about the foam padding if what I pull out ends up being a disaster.

Question: Does anyone know what I’m in for regarding removal of the convertible top pump?

Question: Does anyone know what I’m in for regarding removal of the convertible top pump?

Did mine a couple of years ago. Not a big deal but tight. Managed it without disconnecting hydraulics - just disconnect electrics, unbolt and carefully move to one side. I’ll look out my notes/photos and post anything else that comes to mind.

I remember now that I separated the pump from the cradle (held by 4 rubber bushes) - made it a bit easier. 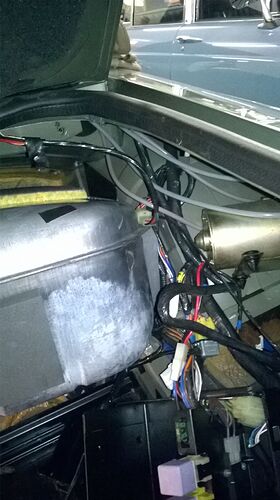 I’ve gone through your super helpful posts and pictures several times…I think it’s what gave me the notion that I could do this myself. I think shop labor is like 19 hours or something…

It’s not a job you want to do unless absolutely essential and I can understand the 19 hours. Are you sure you can’t pin point the leak first? I found one of these helpful

Order online at Screwfix.com. Battery-powered, one-handed, combustible gas leak detector/sniffer with flexi-neck for hard to reach areas. Ideal for pin-pointing the source of a leak with the easy to use single button zeroing feature that provides...

Its sensitivity is about right - it will detect fumes seeping through the walls of fuel hose by osmosis but not so sensitive that it goes off at background fume levels.

Called the Jag shop and he estimated $2k to pull it, send it to get it coated (renewed) and put it back in. The only problem is that it will take several weeks… I think I might just go this route.

Getting a used tank concerns me, since I may simply be installing a ticking time bomb for this to happen again?

I found my fuel smell coming from the evaporative plastic flange at the top of the tank. I pulled the tank to replace the pump and did not get the rubber gasket in correctly and it did not seal as it should. This required me to pull the tank back far enough to redo the flange. The first time I pulled the hoses from under the car. This was a PIA! Getting the clips on and off and the fuel lines seated is a real challenge considering you cannot see what you’re doing and there is limited space. The second time I disconnected the hoses in the wheel well and engine compartment and removed all the clamps under the car and was able to get the tank back just far enough to redo the flange.

I recently replaced that gasket as well as the flange itself!

I believe this has to coincide with an event that caused my tank fuel sender to only show 3/4 tank when full… I believe the tank may have collapsed at some time. I tested a costly OEM sender as well as the URO aftermaket one. I removed the dash and replaced the gauge with a brand new one. I checked the continuity of the wires, and found no problem. I never did find the cause of the problem.

Before I do the tank, I think I need to go back in there one last time and check the hard pipes that vent the tank to make absolutely sure they are not blocked. I was able to blow through it, but it wasn’t easy. Compressed air could make it through a partial blockage perhaps?

I cannot get rid of the fuel smell after I fill the tank up. It seems to go away when it’s about half full, but summer is coming, and it might be worse than that.

Have you checked out the EVAP system pipework valves canister etc?

Yes. I replaced all the rubber hoses with Gates Barricade. I blew compressed air and felt it come out by the rochester valve. I blew into the hose myself and, while difficult, I was able to blow air through. I assumed it was difficult because of the small tube diameter and length of run.

I also replaced the evap flange (mine is metal) and the associated gasket.

IIRC the canister vents to atmosphere - if the purge valve isn’t working correctly or the carbon granules are saturated with fuel/vapour the vent spews out petrol fumes. Can you tell if the smell is worse in the trunk, cabin, under the car?? Maybe I’m clutching at straws, but looking for anyway to avoid tank replacement. Seems unlikely that the tank on a '96 is holed, but not impossible I suppose…

Trunk is definitely worse than the cabin.

I haven’t spent time sniffing under the car when the tank is full. Will do that next weekend probably. On a road trip. Won’t be using it for at least a week.

I appreciate the thoughts. I’m looking to avoid replacing the tank as well. I may go in there one last time and double check the hard pipe connecting the evap flange out to the underside of the car.

I removed mine partially I have a 96 the real Bitch is the lower snap on fuel hoses located just above the rear diff cage. I could not get them at all Someone said there is a tool to disconnect them,However, I was frustrated and just dropped all the fuel lines down from the body and was able to access the fuel pump cover . remove the pump assy and change it out along with the inner hose which was the problem all along as the Ethanol ate the hose. could be just a gasket if the tank is not leaking that would be my first guess. also look into the hose that is connected to the filler pipe that could also be a problem with fuel smell.

Thank you. I have replaced all of the hoses in the trunk with Gates Barricade hoses. I have also replaced the gaiter and o-ring at the filler neck.

I also replaced the two gaskets, one at the evap flange and the other at the fuel sender. I think the tank is the only thing left?

My opinion if there are No visible leaks the Tank is good.Awful lot of work if you are wrong.

Are you saying that the internal hose you mentioned was causing a smell? I really want to exhaust all other possibilities before I decide to pull the tank.

I have replaced all of the hoses in the trunk with Gates Barricade hoses.

I think the tank is the only thing left?

Not if you haven’t replaced the hoses underneath the IRS. There are short sections of rubber hose directly above each rear axle, right where they are difficult to see. When they leak, the fumes can end up in the trunk.

Even the facelifts? I don’t have a sump tank. I think I have three hoses connecting back to the tank outside of the trunk.

The vapor line is metal tubing that occasionally turns to rubber hose then back again. I’m going to take a close look at that again.

I don’t know why any of the hoses inside the tank would smell up my trunk if the gaskets were good.

Are you saying that the internal hose you mentioned was causing a smell? I really want to exhaust all other possibilities before I decide to pull the tank.

A “gas sniffer” or “combustible gas detector” may just give you the conclusive evidence you need. IMHO it is a no brainer.