The rear bumpers on my xk120 are steel and chrome plated but the front ones are not steel and are buffed. Are they pot metal?

The front and rear bumpers were originally chromed c. 14 ga. steel. The quality of the plating wasn’t always great and had a tendency over time to peel. There were aftermarket bumpers available for many years made from a fairly heavy cast aluminum, and I expect from your description that those are what you have.

It sounds like you have those cast aluminum buffed out bumpers sold by JC Whitney back in the early 70s. They also made a repop XK140-like grille as well. My other '120 came with those too. They were quick to go in the scrap metal bin at work. On the other hand, maybe even those too will be collectible given enough time? Nah, I’m only kidding myself.

Correct reproductions are on offer at a reasonable enough price from the usual vendors.

You’re right, they are heavy aluminum. I was able to have them polished and they look like chrome. Cheaper than new ones! Thanks.

Yeah, they are aluminum and my polishing guy made them look like chrome. I’ll use the money I saved on a gallon of gas.

Yeah, and most of the chromed repros I’ve seen are not great. I bought a very nice set from John Farrell years ago but even these are rippled and would benefit from being rechromed after several heavy copper strikes / and finishing wheel treatment - a project for next year, maybe. 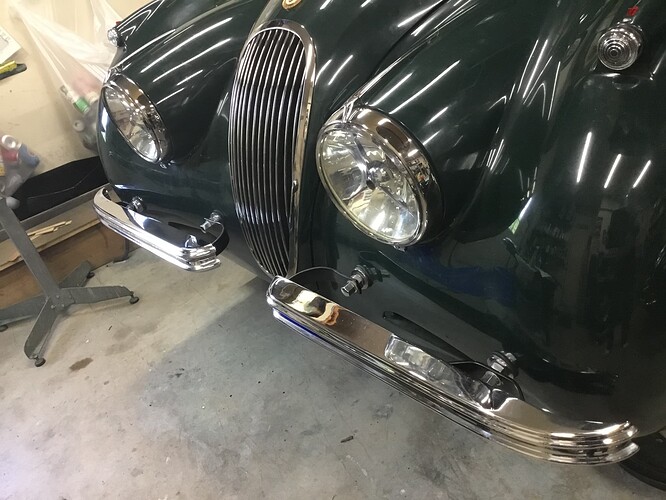 When I first got my car and specifically the brakes sorted and a silencer and tailpipe in order to drive it safely I took a young lady I was dating to a movie. It was a sleety winter night and the roads were covered in slush. Unfortunately, I locked up under braking at walking speed and gently slid into the back of an Oldsmobile. The only damage was to one of my front bumpers which I got straightened and re-plated. During the straightening process they managed to eliminate many of the horizontal indentations resulting in a smooth centre section to the bumper. As a regular runner I lived with that for years until, finally, a while ago I decided to replace it as part of general upgrading. I opted for a new pair from one of our well-known suppliers not a million miles from Coventry and was surprised to note on arrival that the new ones were fractionally narrower than the originals. Unlikely anyone would ever notice and they are certainly an improvement on the old one.

As a result this has left me with one pretty decent front bumper sitting on the shelf. I should probably throw the other one out!