We seem to have a leaky heater core on our 1965 Mark X. The mechanic said it would be around $1000 to replace and that it was a rare heater core. Has anyone replaced this recently and is there a cheaper source or a similar heater core that would fit?

If not, is there any specialty radiator shop that can rebuild stock heater core?

It may be getting to be a lost art, but old fashioned shops can usually fabricate new cores, from sheet stock of brass, and cores cut for the specific shape.

We seem to have a leaky heater core on our 1965 Mark X. The mechanic said it would be around $1000 to replace and that it was a rare heater core

A used unit may be obtainable. I have a couple,

I think Clive would have some for sale, he is in the UK

dont know what Country you are in?

any heater core would do afaic, just fab pipes to the correct location

(now I remember that the heater core is shaped to fit in the heater box, so the air flow must go thru, not around it…a non-original heater core would probably be troublesome to fit properly)

We are in US. DC area. I have not looked at how much work it is to replace the heater core. But it seams like it is more work than etype. I guess if you had slightly smaller core, you could pack it with foam around to ensure proper air flow. I was hoping to find a similar heater core to swap out from other vehicle.

When your mechanic told you that the cost of replacing the MK X heater core would be $1000 did he break it down Parts and Labor? Any heater core with baffles can be made to work. Try to pin him down on the hours needed to replace the old core. Pete

replacing the heater core in a MKX or 420G is VERY easy, and would not take more than 2hrs

its all in the Service Manual of course, but;

that is the easy part.

WARNING…the junction of the heater case to scuttle assembly is very bad spot for rust in these cars, almost inevitable, and really should be checked by removing the entire heater case.

Some extra work here, undo 2 big bolts, and you may be able to manipulate the whole lot out, if not, detach fans, worst case scenario, remove cam covers and rear cam studs to give easy clearance

it certainly would be feasible to to re-arrange another heater core, but all that takes time, if you have time I would fix it myself, but if you dont, one is at the mechanics mercy @$100ph

Has anyone replaced this recently and is there a cheaper source or a similar heater core that would fit?

As I mentioned earlier, Clive, who also runs the 420G/MKX symposium does regularly UK Ebay parts for these cars, and sells via email etc etc.

have seen the correct heater cores Ebay for not much, and postage would cost more, but I reckon you could probably get one landed in USA for that source for less than half what you mentioned + ~2hrs to R&R.

out of curiosity, I am wondering what is a good way to store & preserve old heater cores and radiators, and am thinking of letting used ATF run thru them? , preservative oil on exterior

I think a quality old-skool radiator guy could make a new one for you (good luck finding one)
Have you rung BarratTs or Manners to discuss the situation?

They should be copper, so I would imagine nothing needs to be done to store. Maybe just rinse out.

My father had looked at manual and thought there was more to it than that. 2hrs does seem easy. I also have hose clamps so should make job even easier without having to drain system. I have not yet had time to look at the task at hand.

We may have a spare but have not yet located it. I guess new is always better but I will look on ebay as well.

Thank you everyone for posting.

@Pete55Tbird I think the $1000 included labor and new core from UK. We are told it is rare and hard to come by.

Worse come to worst, I think my “old school guy” could reproduce it.

when my multi-thousand dollar polished brass radiator from a vintage truck copped a wack from the fanblade and damaged it, I used epoxy resin to fill a cut waterway, then rolled it up with pliers, never failed.

I also repaired a leaking copper pipe that some idiot builder has buried in a mortar wall, with a drop of epoxy, many years ago, and it hasnt leaked either

I would examine the core to see if this might work

replacing the heater core in a MKX or 420G is VERY easy, and would not take more than 2hrs

Wow, they sure changed things between the 420G and the XJ6 Series 1. On the latter, it is often said the heater core is suspended in the air and the car is then built around it. This is confirmed when you see what must be removed (from the cabin side BTW) in order to access it.

This is confirmed when you see what must be removed (from the cabin side BTW) in order to access it.

On the S-Type it’s quite straightforward - you don’t even need to remove the engine.

Wow, they sure changed things between the 420G and the XJ6 Series 1.

Yes, the earlier Jags had the heater core accesible from the engine bay, the XJ is a mongrel of a thing, try most modern cars, a heater core job will make you want to cry

If the heater core base, which is just enamel painted metal rust into the shelf it sits on (which they ALWAYS do), and if that corrosion penetrates the 2nd internal metal pressing, you are required to utterly remove all internal dash parts, back to bare firewall, cut the rust out and fabricate new sections.

It is really important to prevent this, I fabricated a new heater case floor, and repaired the top layer of metal on the car, spot welds need cutting and mew metal welded in (from engine bay)

You cannot see under the heater case till it is out…there is seals in there that will be shot, and a recessed area, that builds up dirt and moisture…this is exacerbated if the car is mainly parked with nose pointing uphill

My father had looked at manual and thought there was more to it than that. 2hrs does seem easy. I also have hose clamps so should make job even easier without having to drain system. I have not yet had time to look at the task at hand.

check he read page O7, heater matrix, not O9 heater unit (altho I recommend removing this to check for rust, unfortunately many extra hours labor, and could lead to shipwrights disease )

the vacuum valve is often dodgy too, doesnt fully close

Unless your mechanic is charging more than $100/hour then your heater core is $800. Get a replacement heater core AND a new mechanic.

This forum is just a great place to be. A bit of time and you find all the answers… I was thinking of what am i doing wrong, heater unit is loosen according to service manual, but dont move in any direction… Now its clear, that tons of rust is waiting for me…

Ill try the hint with dismantling fans at first and i pray to get the unit out without cutting the firewall, which seems quite good from the interior side… 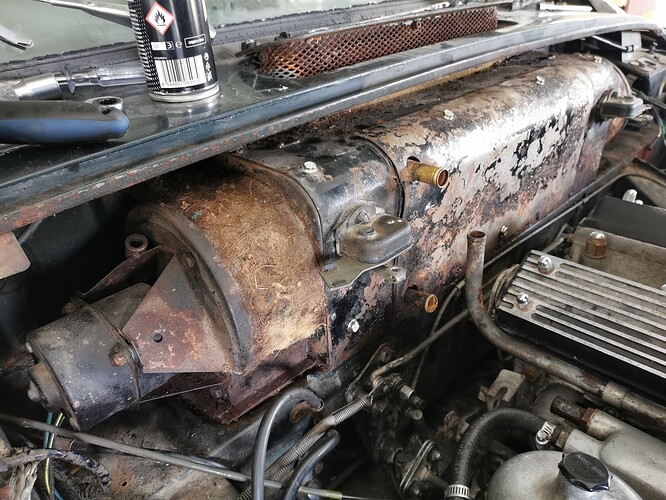 Yes, you should remove the fans

I dont know whether I mentioned this but its VERY difficult to get the whole unit out past the cam covers, and most especially the rear cam studs

In fact mine were cut at a 45* angle, which I dont think was factory, but it was enough to let the heater box slide out, the alternative would be to double nut out at least some of the 4 rear cam studs

Ill give it a try. If the heater unit could be released, I hope to slide it to the side, as all my brake system parts are out of the engine bay. I saw the post about upgrading A/C here, not sure about upgrading heating. A small issue is, that I have to register the car on historical plates (once, in the far future, when the D day comes

) and I have to stick as close to originality as possible, according to Historic cars association regulation here, otherwise car cant be registered on plates and cant be driven on roads. You can make few changes though, but have to decide carefully which ones, as (I think) they are limited to two system upgrades on the whole vehicle (brake system, transmission, eg.). Some “horror stories” are told, that even stainless exhaust system can be the reason of denied register application…

I did this job last year, but with the engine out, which is much easier. I did not have to remove the fan motors, although I did afterwards for restoration of the box, so no harm if it helps you. I see that you have at least one of the two diagonal bolts out already. The only thing holding it to the firewall is mastic (and maybe rust!). That said, mine was quite difficult to unstick to the point that I assumed (wrongly) that there were more fasteners. Do not be tempted to undo the metal ducts on the inside. You cannot tell it, but these fixed with studs to the body and have no direct connection to the heater. I do believe that, as Tony already explained, you will have to remove the valve covers, but the heater box should then come off.

Expect a sorry mess when you get it out as the metal is all plain steel, barely painted if at all. There is what I call a “bathtub” arrangement in the top of the scuttle to catch the water that goes through the heater box, funneling water out the firewall. If there is rust through, it can go all the way through the center of the car, and repair will probably require pulling the engine. If your floors are good in the front center, that’s hopeful. On my car, I had to rebuild the heater box including replacement of the whole floor, remove the old “bathtub” and treat the rust in the center of the car with POR15 through the hole, then build a new catchment basin out of aluminum which I screwed and bonded to the car. I have my fingers crossed that you find solid metal in there. I’ll try to dig up some photos for you.