How to make her purr. Compression, ignition, carbs and idle questions

New to the forum. Have read a lot. See a lot of experience here. I have a number of questions. My 1960 MK9 idles rough and is lacking power. Left exhaust pipe is inconsistent, right pipe smooth.

When clearances are that out of whack, yes, it will lead to weak/uneven running.

Once adjusted, you then need to see why the compression is that low. Do a wet/dry test.

Item 1 & 2
Firstly adjust ALL those valves, ESPECIALLY exhaust #1 and #3, that’s why your compression is low in those two cylinders, and why your car is running rough.
#1 exhaust valve will burn out if you leave it.
#2 inlet must be tapping to high heaven,
Oh yes , welcome.

Welcome to our group. Watch a YouTube video on the operation of a vacuum gauge as a matter of education. It’s a much overlooked bit of kit but ideal for our dinosaurs. Can diagnose multiple faults from sticking valves to late ignition timing. Some of us are big fans. Agree with the other guys as well. Paul.

Not before the mechanicals have been sorted.

do what is essential first, do what is relatively easy next…do "upgrade swap last…That means essential is adjust valves- confirm cam alignment, re-check fuel delivery, Next do the Easy which is replace plug wires (for wires…tho.a problem…if you will use distributor you want no resistance wire set, but if you use the EI module then you will need the resistance wires they recommend) , replace spark plugs, yes the NGK…as they have a wider heat range in a given plug ) and in my opinion do points-condenser-check vac , unit on the original distributor… set timing,…all before a swap to an electronic…so as to get it running nicely first. If all is fine…why swap now? Then Recheck compression and vacuum. Nic

Nic, I think your route sounds best. It seems like the small benefits that may be gained by immediately putting in a EI are minimal. I am adjusting valves now and will just put in a set of NGK plugs for now. I know how to set points and timing. I have a 1960 MK9 3.8L with 9:1 compression. Glenn’s repair and tune up guide calls for Champion N5 with a .025 gap. Cross references call for NGK B5ES or B6ES. What would be your recommendation?

The NGK B5ES is a step “hotter” than the B6ES. .I would install the 6… You don’t want too hot. NGK have a bit wider range within one plug than do Champion. you seem able in the valve adjust…(but there is a fine article-narrative of it in the archives…) .It usually ends up with two adjustments…but maybe you will be the lucky ONE. 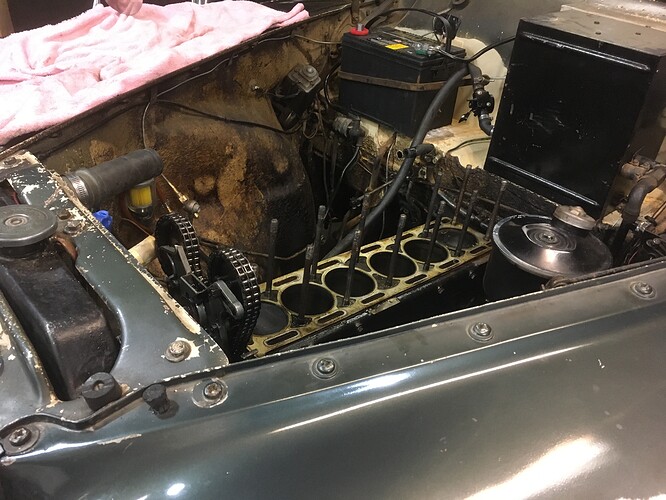 IMG_62684032×3024 2.16 MB
Miss Daisy is having major surgery today.
I took the head in to fix a couple of valves.
The engine had been rebuilt only several thousand miles ago according to the PO. When I bought it, he would not take it for a spin. Said transmission oil was low. Hmmm.
It idled very poorly, and as mentioned at the beginning of this post was low compression on two cylinders.
Well, I tried everything else, including adjusting the valves. Did a leak down test and found air coming out the exhaust side. Pulled the head yesterday and found two valves not sealing.
I really hated getting into the engine this far, but having someone else tear it apart might cost more than I am wanting to invest. I will save the restoration budget for leather. Besides, with the shop manuals and lots of experience, it was not that hard.
So now the head is at the shop, and they will investigate and fix those valves. I had Miss Daisy running, and I hate to see her laid up, but something had to be done. I could not stand having such a pretty car idling so poorly at the stop light. 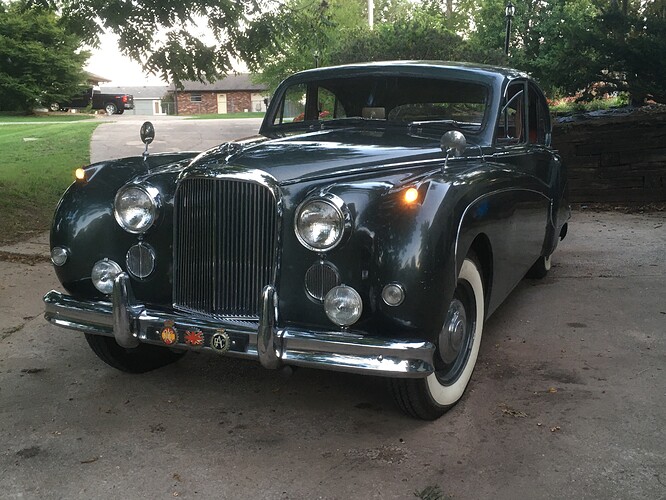 Gorgeous looking car. I had a Mk viii many years ago. Loved it!

We have had our XJ6 since 1987. It never really idled well until lay up in 1993 - even after an engine rebuild. Waking it up again in 2017, was much worse. As your good self I pulled the head, spent $780 on a good head service. All fitted back after a carb overhaul including new throttle spindles. Rock steady at 500rpm in drive, idle at 700. The last improvement was removing the AED. Yours should be similar. Paul.

not familiar with AED. What is that? I also found a vacuum leak in the 90 degree flex hose to the brake booster.

How would that help? what would be used as a choke?

The AED acts as a choke: tt works by greatly enrichening the mixture at cold.

It’s a different method of introducing much more fuel for a cold start.

It is a little carburetor that is set really rich and thus works as both choke and fast idle device.
You should have the predecessor ASC between the two SU, with the black solenoid on top.

I understand the Aux carb and its solenoid and how
it is fed from the front carb. Paul improved idle by removing the AED. What I do not understand is why removing it would be an improvement and what is used to enrichen fuel air mixture and raise idle without it.

Dana
If the AED is removed one would have to retrofit the base of both carburetor to accept a mechanical cable operated choke, no a cheap affair if one had to purchase new parts from Burlen.