Taking the car for a spin and I got about 100 yards down the street and it died. I repeatedly tried to start it assuming the choke was not working and then I pressed the throttle to the floor as if were flooded. Just got short 1 second blasts of running. Called my wife with some starting fluid and it would run for 3 or 4 seconds. I should have checked the clear filter in the trunk/boot first. Upon inspection is was almost dry. After taking off the gas cap it started to fill up.

Hearing that high compression bang brought tears to my ears. Neighbor walked over after we look at the almost dry filter in the trunk and suggested be remove the cap. The car then started as there may have been a venting problem.

Problem is that is runs horribly and there is a nasty sound from the Drivers (USA side) of the cam covers. i fear that I have bent a valve with the copious use of starting fluid? Listen to the video and tell me your thoughts?

Engine is almost fully warmed up in this video and sound like it is running on four cylinders. I checked all secondary wires and they are snug.

As I said, first thing to do is run a compression test.

After a compression test I would look at valve clearance behind the cam heel. If a valve is bent it expect it to show in a large clearance.
A lot of old sedans have rusty tank that may not leak but shed coffee ground like rust to block everything. One of my 420 tanks had what looked like tar. You can’t fix a tank. Replace it.

Are you sure you haven’t just blown out a piece of exhaust manifold gasket ? 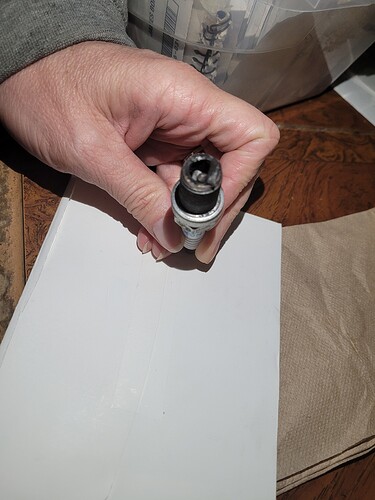 Something very bad happened. Head off.

Sorry to see that, Gerard. What Paul said. Paul.

I really hate these ether autostart stuff. Killed my diesel twice with those.
Cam rockers, timing belt, a few valves.
Consider it a defibrillator to Your loved one.

One of my 420 tanks had what looked like tar. You can’t fix a tank.

I dare to oppose. My tank had an inch of tar-like gunk after sitting for 40 years with fuel in.
Within a week or two I restored it fully, and last weekend I painted it inside for rust protection.

Regarding the spark plug picture - a collision. Hopefully just piston - broken valve.
But this would rattle more when running. Is this piston still moving up&down when crank is rotated … ?

Here are the compressoin readings. We had sprayed the starting fluid into the air cleaner so it was not directly going to either the front or rear carb.
I took these readings with the engine cold, all spark plugs completely removed, six seconds of cranking and not touching the throttle. The engine was rebuilt ten years ago and has only 16,500 miles on it. It was seemingly running fine until it broke down yesterday and I used starting fluid. Not sure this would cause detonation and damage of this magnitude. It will run but I am not going to risk starting it again. Using a borescope it appears that there is a bit of carbon on all of the pistons. The number one plug was carbonized to the extent of being crispy.

This is an 8 to 1 3.8 liter engine
The number four threads are fouled as the spark plug electrode was hammered by something and when I pulled the plug it ruined the threads.

Pictures and video are in posts above.

Head is going to have to come off.

That’s too bad, but at least ya know now.

I will next do a leak down test to see if air comes out of the tail pipe, the carbs or the exhaust to see if the damage is more than the head. Could be the rings and other tidbits. Might be a full rebuild.

Broken a valve that is now embedded into the head and piston! not sure why ether would cause that but over revving could, Re tanks, I have strapped them to a cement mixer drum and filled them with a good handfull of nuts and bolts plus a gallon of traffic film remover, run it for an hour, chamged position a few times to ensure even crud removal, steam cleaned after and then applied an ethonal proof sealer as any steel tank will rust inside out with this modern c++p fuel we are being forced to use,