Hello forum
I am trying to identify the serie of a jaguar 2 + 2 automatic box whose number of chassi is: 1E 77673 BW. I do not have the year of manufacture, but it is between 1967 and 1968.
This is not obvious because the hood is fiberglass, the engine and chassis are not original (I have a manual box and three carburetor). Otherwise I have the switch on the dashboard and not the push buttons.
Are there any other elements to look for to identify the series: between 1 and 2?
what would be his estimate at least with this hood fiber with covered headlights and non-original mechanical box and three carburetors and 2 + 2? (Would there be a big price difference between serie 1 and 2, in 2 + 2?)
It is rolling and not rusty.
thank you so much
Have a good day

Hi Philbert,
The S1 has the indicator lights above the bumper and the S2 has much bigger lights fitted below the bumpers. The 2+2x also have chrome mouldings on top op the doors, just below the window opening.
Then of course the serial numbers of the different models is your best bet.
Regards
Chris

The XKEData pictures show closed headlights so it is probably a late series 1. That car has a manual box and a S1 radiator from the look of it. And a burr walnut dash panel.

Yes, but as I wrote the hood (resin) engine and gearbox are not original. Can not trust these elements to determine the series!
The pictures on Xke data . are that of the modified jaguar: it’s me who put them

The car is almost without a doubt a '67 car. Only reason I say “almost” is because anyone could have modified the car after all these years. That said '68 cars look externally exactly like a '67 and earlier but they have a S2 interior and engine compartment. The engine is the first with smog controls (2 carbs) and the interior with safety features like recessed door handles and of course rocker switches. These were not piecemeal changes as the '68 cars were mandated by law to have these two major changes. These so called S1.5 cars (1968 model year) are said to have started production in mid to late august '67 and all were delivered as model year 1968. All cars prior to these federal mandates had toggle switches and 3 carbs with otherwise smaller evolutionary changes from '61 to '67. As for the covered headlights as you already know it didn’t have them, those were deleted in January '67. Those cars are for clarity sometimes referred to as the S1.25 cars while the '68 the S1.5 truly a half step toward the S2.

One of those pictures shows an interesting take on a non-factory exhaust manifold heat shield.

Best way to determine the dates of build and dispatch would be to acquire a Heritage certificate.

The car is almost without a doubt a '67 car…

I agree. On XKEData both earlier and later car numbers are registered as '67s.

But that was the easy part… Philbert’s closing question was (paraphrasing) : What’s it worth?

That’s not exactly true. Yes all S1s have lights above the bumpers but the open headlights came a year and a half (Jan '67) before the S2 and rocker switches arrived on the '68s.
pauls 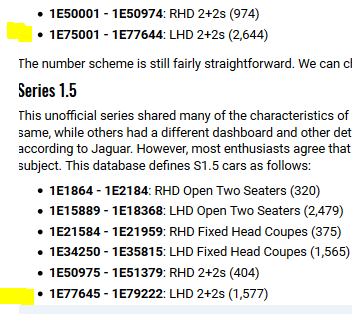 Hello, thank you for your answers. Above two contadictory documents. The painting of the jaguar heritage above seems to identify my jaguar as a series 1. The table of the specialist Paul Skilliter gives a serie 2 .
your opinions
thanks

Trust the 1E77709 number, it is most reliable. It is the number published in the JCNA judging guide with a great deal of research and actual observations… and agrees with tech and service bulletins. I’ve found major disparities in the published books by Porter and Skilliter. No disrespect to them but factory records seemed to sometimes disagree with what was actually published to the field and closer to reality.
pauls