Is this cable the coax cable I hear can cause trouble? I have had fuel injector issues like crazy and this is the last thing I can figure might be causing the issues. 1985 HE with Lucas. 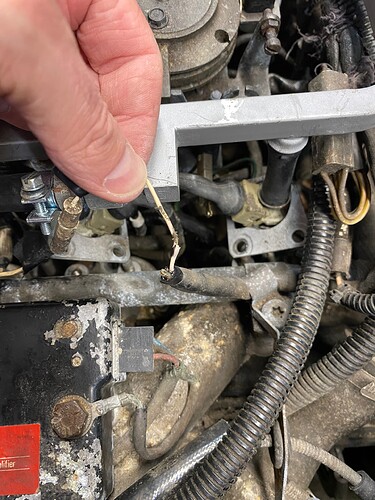 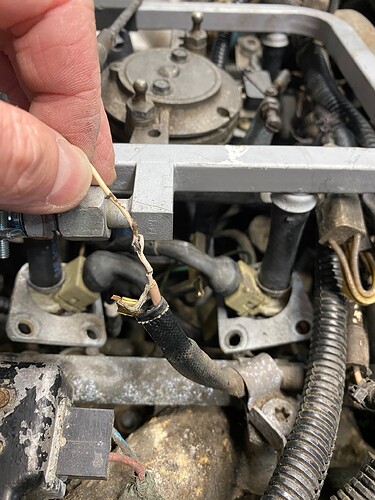 That’s coaxial cable alright (called shielded cable except by Jaguar; coax is similar but has specified dielectric properties for use at high frequencies). Is it connecting the DB-14 ignition amp to the FI? The centre conductor is necessary. The shield is supposed to reduce extraneous noise etc from triggering the injectors. It should function without it, but not if the centre conductor is shorted or open circuit. IMHO.

Thank you! Mines a horrible, brittle mess Would it be prudent to run a wire back to the ecu pin 18 to test if this is indeed my problem? One bank of injectors stays open and floods into the exhaust while the other bank doesn’t open at all. From my research this cable could cause that issue right?

I don’t own a V12 so hopefully someone more knowledgeable will chime in. But yes, I think you’re right. That wire, one to the tach, and the one that goes to the coil are all coming from the same source through isolation resistors–the ignition pulse generated by the GM module. The wire in your hand looks like it’s not shorted to the shield. You could clip onto its (stripped) end and run it to the ECU to try it. Is the short yellow wire in your photo supposed to go to the tach? If so it can stay disconnected but of course the wire to the coil needs to be intact. IMHO.

Well it’s not the coax cable. Same symptoms. I have reached the end of my patience with this car. I have three ecu’s, rebuilt the fuel injectors, tested every single wire for ground faults, cleaned and tested every terminal on the ecu wiring, cleaned and tested every wire that I know that pertains to the fuel system under the hood for continuity and short to ground. I have been at this for several months and I just don’t think I have the patience left for this v12. For the very first time in my life and out of hundreds of cars, I admit defeat. This Jaguar has beaten me. Beautiful car, I can now see how some people are justifiably against ever owning a Jaguar. Id love to see it run but am fresh out of ideas. If anyone knows of a mechanic in the Atlanta/Woodstock GA area let me know. Otherwise I am back to considering a lump for this car.

There is an excellent mechanic in Huntsville, AL at Y.E.S. Motors. But if he takes on your car it probably won’t be a quick turnaround

Have you done a compression test? Do you even know if you’re dealing with a good engine?

Yes I did a compression check last year when I got the car. The compression is good. But that really doesn’t matter if I can’t get the fuel system to operate even slightly like it should.

One bank of injectors stays open and floods into the exhaust while the other bank doesn’t open at all.

No, I don’t think the coax can cause that. In my experience, that sort of failure is sometimes caused by a short in the injector wiring, but more often the ECU itself.

One bank of injectors stays open and floods into the exhaust while the other bank doesn’t open at all. From my research this cable could cause that issue right?

A short at the coax cable would have a global effect, i.e. both banks.
Your problem is either the ECU either the cabling as Kirbert said.
You say you tried three different ECUs? Were they tested and known good working ones?
I would check the injector wiring harness at the engine bay next as it will be at the same state as your coax cable.
Most probably one bank has no ground connection at all and on the other bank the ground is shorted.

Waaaay back in the day, we had a member reporting problems with multiple ECU’s, and eventually discovered his engine wasn’t properly grounded. The notorious 3-ended ground strap down at the bottom of the front subframe is forever being reinstalled incorrectly by mechs who don’t understand it. That’s why I have long recommended an additional ground strap from engine to chassis, up higher somewhere where it’s easy to check on. From power steering pump mount to front anti-sway bar mount is a good choice.

Speaking of ground straps, those were the one thing I forgot to disconnect when lowering subframe.

Thank you. I haven’t checked the ground strap yet. I will get on that next. Should I just rebuild the injector harness for good measure? I have the parts to do so. Is it a laborious project?

Yes, do make sure your ground straps are good and even add an other one.
But even though a bad engine ground will definitely confuse the ECU it would again have an effect on both banks, so check your injector harness, and even more so if you already have the parts.
There is some work involved but nothing extraordinary.

I added one from one of the alternator bolts directly to the chassis.

. I have reached the end of my patience with this car…Adam
[/quote]

Adam, In your other post (the super long one with a hundred + postings) …just yesterday…, it was recommended (by myself and another poster) to swap out the resistor pack…you know…the one hanging there, that the PO was fiddllng with. You were also looking at rebuilding the injection harness and a poster gave you a link to Bywaters site for those details. There are also multiple postings on this site from individuals who have rebuilt the injection harness. Use the search feature on this site and read them, print out the schematics, and determine if it is something you are capable of doing. Someone here may have a spare resistor pack that they may loan you to test out. Maybe even a loan/purchase option if it is the culprit. As far as the harness, you can ohm yours out to check for bad wiring, take it out of the engine and do some serious checking and testing. Do any repairs necessary and cobble it to make it work…even if only temporarily.

You keep asking for help and don’t follow the help suggested. Now you are fiddling with the coax cable., which no-one suggested was your problem (because the faults you have don’t suggest the coax cable is at fault) And again, you are ready to lump the engine because it is not the coax cable.

So, let’s be clear…you have one engine bank with constant Noid lights on (and not strobing) and the other bank with zero Noid light operation. That single solitary Noid light test in and of itself, tells us that you problem is either a wiring fault, an ECU fault, or a resistor pack fault. You have multiple individuals here with a great deal of knowledge on this engine, offering wise advise on what to check, and you don’t do it.

Fix the injection harness and find a replacement (known to be good) resistor pack.

I have followed everyone’s recommendations so far. Including yours. I have tested all the wiring in the harness, rebuilt all the injectors, replaced the ecu(twice), tested for continuity on all related items, tested for ground faults on all related wires, and will now try and figure out a source for the resistor pack per yours and others suggestions from this site. I will also check the ground as Kirby has mentioned. Is there anyone near Atlanta, GA that has a resistor pack they can let me try?

before you replace the resistor pack, it’s worth just unhooking yours and looking for corrosion on both sides of connector. Very common place. Jag connectors back in the day are notorious for not being well sealed. I’ve cleaned plenty on mine.

I checked and cleaned both sides of the connections. I did find a used resistor pack for $100. Im going to grab it tomorrow and see if it has any affect. I am crossing my fingers…