Lowest rpm at idle you've had

I searched the forums and didn’t find a topic on this.

When the idle was down at 100-200, the engine would idle so incredibly smooth and quiet it sounded and felt like it wasn’t even running … like a quiet sewing machine.

I was thinking of this the other day and was curious what the lowest idle any one has had. 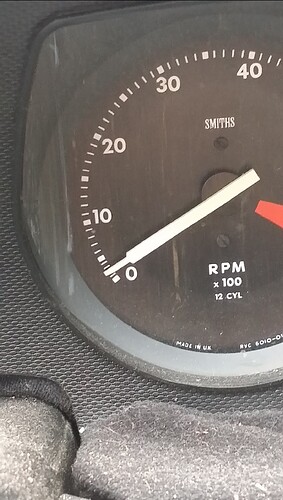 Jerry,
For both of the 1990 V12 Jaguars that I have owned for 18 and 12 years respectively, the lowest RPMs that I have ever seen are about 750 RPMs. I keep the throttle bodies clean, replace the throttle bushings when they are cracked, replace plugs, air filters, fuel filters,and wires when needed, and keep hoses and wiring in good order.
The only exception to this was when I experienced fuel pump failures and the RPMs went to zero.

I’ve never experienced a RPM as low as 200.
My 1982 v12 usually sits around 750 very smoothly but when I bring her back from a run she’s inclined to idle at 500 where she hunts and misses but nothing major so I just let her do her thing. Probably due to some wear in the throttle linkage.

When the idle was down at 100-200, the engine would idle so incredibly smooth and quiet it sounded and felt like it wasn’t even running

A good way to determine if you have any vacuum leaks is to temporarily block off all air to the AAV. The idle should drop to 300-400 rpm, assuming throttle blades evenly set at .002" and the engine warm. The adjuster screw on the AAV increases rpm from there…by simply admitting more air.

He wants to know what the lowest possible idle is, not what it should be -
His issue has been resolved long ago and now we are curious what could be possible.

4.2 with half the cylinders can go really low, 250 rpm in gear and at full lock you can’t feel the engine much.

I assume the v12 with twice the power pulses and more rotating mass can go much lower, until power runs out to sustain the momentum. Or the mixture can’t keep up with the low air consumption. I’m sure it would do 100, maybe even less.

I have a 1996 xjs convertible with 45,000 miles and just recently the idle stays up at around 15 in park and around 10 in drive. When it warms the engine starts to shake the the idle goes down below 4 the it shoots up to 10.

The needle is almost centered over the 200 mark, but there is a little more black space above the needle than there is below the needle.

The lowest I remember seeing it at that time was where the needle was centered below the 100 mark and the 0, yet just covering the 100 mark.

I was too impressed that it was still idling, let alone how smooth it was idling, and also looking for “the how” it was that low … to go get a camera to take a photo of it.

Luckily I had my camera with me the time it was down at 200 again.

Yes, the issue was resolved back then.

Mine was recently that low, but not silky smooth. She’d hunt between the 100 and 200, then if I tried to do anything, like put it in R or turn the A/C on, she’d die.

Thanks to your post, I’ll be trying to get a snapshot of that next time it happens

Ok, no, I’ll be actively trying to get my idle that smooth that low

At this low rpm you need every cylinder to give all they’ve got… maybe a vacuum leak that causes power loss,…?
I could get my (injected 6 cylinder) so low in gear and with the steering at full lock. My new one idles at 500 and it doesn’t go down much further whatever I do, but I’ve seen 200 when adjusting the carbs and it didn’t seem unhappy. Without load however.
I’m convinced the v12 can run much slower. Someone should try to at least get below 100.

Not problems on mine - I had just replaced the G-Power platinum plugs from NGK back to the NGK Nickels (BR7EFS) with new NGK wires. She just wasn’t as happy with the platinum plugs. That switch caused the idle to drop when cold down to almost nothing. Because of my setup (no AAV, etc), I just tweaked the throttle gaps to get the idle I wanted. I’m pretty sure that I could just close the throttle gaps just enough to get that idle down and still smooth, if I’ve got things tuned correctly

Someone should try to at least get below 100.

I didn’t “try” to get mine below … it would do it on its own whenever it wanted to.

The needle would basically be between 100 and 0, being a little close to the 100.

Difficult to tell as those marks are so close together. Only way to know would be to connect a digital tach to it. Which I don’t have and didn’t even think of.

I’d be interested in someone with an unmodified smooth running V12 connecting a digital tach and intentionally gradually adjusting it to as slow as it will keep running.

I’m thinking it could go to below 30 rpm.

If I did my math correctly: V12 means 12 power stokes per 2 revolutions (4 strokes for each cylinder), which would be 6 power strokes per revolution, giving 30 rpm 180 power stokes to keep it running.

Is my math correct?

Not at all related to Jaguar, but the lowest consistent, smooth, engine idle I ever saw was on my parents 1935 Phantom III Rolls-Royce: in proper tune It would idle at about 200 to 250 RPM. It was eerie, because you could almost count the fanblades!

Sounds like a 1929 Rolls Royce a friend of my father had back in the 1960s. I have no memory of how fast … slow … the rpms were, but at idle, we best described it as like a smooth running sewing machine, which may well have been the fan blade air noise, which we didn’t think about.

On Her Majesty, you couldn’t even hear the fan!

It was just a slight rrrrr.

Shouldn’t: if there’s 1 psi going through the system at that low an r. p.m., nothing bad will happen.

Paul, we were standing next to the engine, hood … er … “bonnet” open, leaning in and listening closely to that beautiful motor just setting there idling so smoothly. A true masterpiece of automotive work.

Was your “rrrrr” while standing outside next to it with the bonnet open or closed?