Was looking for a correct Lucas Wiring Diagram for my 1954 Jaguar XK 120 OTS. I do have the FHC version for 1952 - 1954 and I’m possibly able to “deduct” some of the items the OTS doesn’t have, but nevertheless: does anybody have the OTS version for the later years?

The subject has been dealt with in the past (with an important contribution from Roger P.) but not everything became clear. When I started making an inventory of Lucas Wiring Diagrams for Jaguars of the Fifties, I soon became confused. Lucas used a number for every wiring diagram they made, but it’s not just a sequential system: For example: XK’s are in a different group than Saloons, and also the system changed over time. 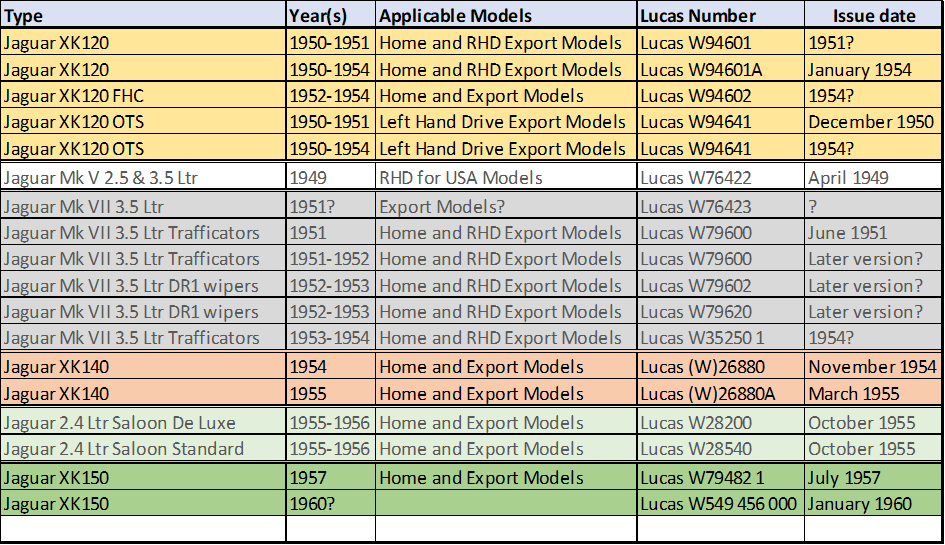 The above spreadsheet tries to map the developments in the Lucas Wiring Diagram numbering system. The Saloons (commencing in this survey with the Mk V of 1949) had a W76xxx number. The various XK 120 Diagrams received Lucas number W946xx.
But with the introduction of the XK140 the numbering changed and these now had a 268xx number whereby (possibly) the W had dropped. Are these examples much later issues or did the Lucas system change indeed? The Jaguar 2.4 Ltr Saloon received again another number W28xxx, more in line with those for the XK 140 but completely different from the numbers for the other MK VII Saloons.
The Jaguar XK150 started with W79xxx numbers in 1957 which could have been a logical continuation of the system as started with the XK 120. But why did Lucas use different numbers for the XK 140?
Towards 1960 Lucas changed the complete numbering system and as an example the later XK 150 wiring diagrams have the number W549 456 000 (9 figures).
This survey is far from complete but the importance of the Lucas Wiring Diagrams is well accepted by most of us, reason for me to present this survey now.

Final question: does anybody have a good copy of the 1954 issued Wiring Diagram W94641 and note that the 1951 issued version has the same number but may not be identical… 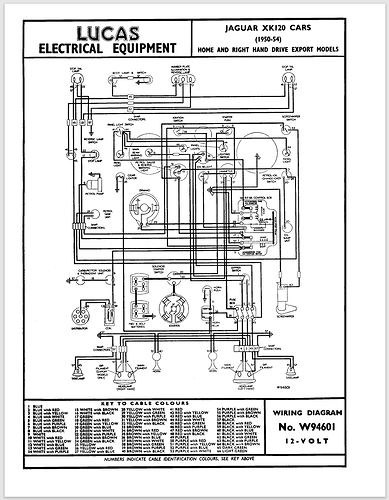 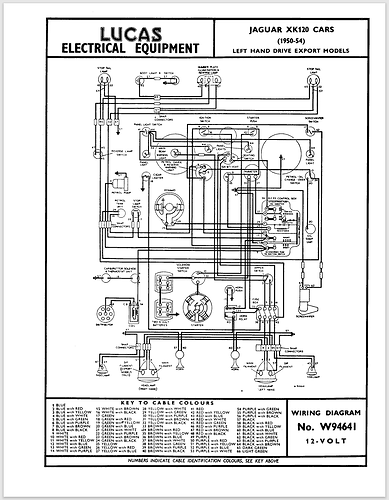 946411920×2485 489 KB
Date at the bottom Jan '54.
This last one is cut off at the bottom, apparently the printer did it to make the paper the same size as the rest of the manual.
Hmm, you’re right, no heater and no turn signals, but they do have the petrol changeover switch.
What then is the difference between LHD and RHD? Only difference I could find was the position the draftsman drew the stop lamp switch and the wiring to the horn relay. Why create a separate drawing for each? Was it to show different lengths of wire or bullet connectors going to the wiper motor?
94601A dated Jan '54 also does not show turn signals. 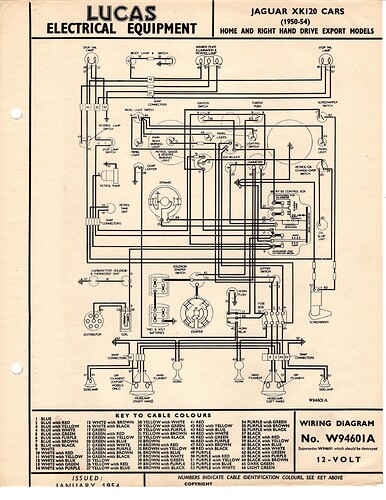 As you note, this is all somewhat complex. All original LUCAS Wiring Diagrams for XK120 are indeed identified by their W number, a brief title, and an Issued Date, and many also with a dateable printing code. These were single sheet, no holes and 8-1/2" x 11".
Then you get the reproductions as copied by Jaguar that were included in the rear of the Service Manual, with those included varying somewhat depending on issue date of Service Manual. These always have the 2 holes punched, and are trimmed to same size as SM pages 8-1/2" x 10-3/4" so chops off a 1/4in, with some variable impact depending on printing variables.
Then you had similar copied issues for inclusion in other period non-factory Service Manuals which invariably are not well titled/dated, so hard to quickly match to Lucas original…

Attached is a list of what I have… if any have any new or of interest relevance, I can get them out and check detail…

I would be surprised if I have missed anything else issued by LUCAS on XK120, although this is always possible…

I have a huge collection of other Lucas Wiring Diagrams, I think pretty comprehensive post-war, but only a few SS Jaguar ones prewar, not that I suspect many different ones ever issued. If you want a complete list of all my Jaguar (SS) Wiring Diagrams I can send you a copy of my excel spread sheet direct - as you can see from the above XK120 only list, its difficult to copy/past excel spread sheets on this site…

Thanks for these. So we conclude that Jaguar (or better Lucas) never updated the Diagram for the final years, other than changing the year indication to 1950 - 1954.
The “best” Wiring Diagram for the later LHD OTS models is therefor the Wiring Diagram of the 1952 - 1954 FHC version (Lucas W94602). This does at least show the Indicators / Turn Signals but still has the switch for the oil sump unit as used until October 1952.

As usual: a wealth of information! I will copy these into my spreadsheet.
Like I mentioned to Rob R., it looks like Jaguar never updated the W94641 Diagram (in whatever of the versions you’ve listed) regarding the Direction Indicators. Also the Petrol-Oil Changeover Switch was still shown, although used until October 1952 and correct for the years indicated (1950-1954) but it might have become a dotted line by 1953.

We keep the Lucas coding changes for a later date…

We can also note that the FHC diagram W94602 shows a switch and wire for an interior light, the wire running off the page rather than drawing two lights. Thus it can be applied to DHC. But OTS owners with turn signals will have to use the FHC diagram and ignore the interior light switch.
Still a mystery why they would make separate slightly different ones for LHD and RHD Home and Export when there really wasn’t any difference. Maybe they intended to add turn signals to the LHD diagram for USA but never got around to it.