Can anyone identify the rear bumper brackets here? The ones with the taller hook are a Mk IV match, but the shallower ones…? 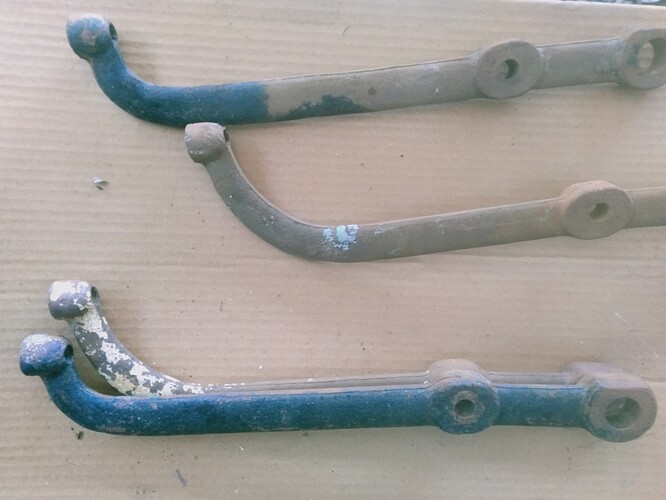 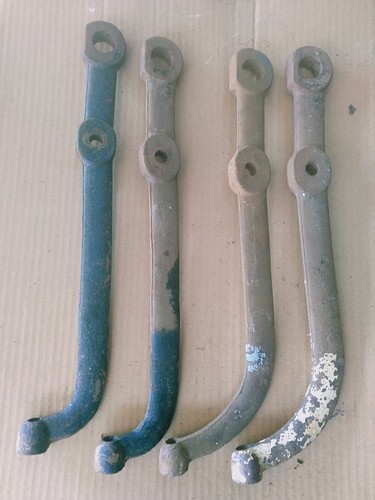 I think they came off this car after it had run over too many bumpy roads.

alternate fuel 0011753×761 405 KB
Ok seriously, it would be from a car with a lower than normal bumper.
Probably related to the difficulty of getting the spare tire out.
Not '38 models with the swing down bumper anyway, we can eliminate them.
What about a 1-1/2 Liter?
There was a different bumper for Special Equipment models.
In Skilleter’s Jaguar Saloon Cars page 116 there is a picture of a post-war car where the bumper looks pretty low to me?
Who made the bumpers, was it Wilmot Breeden? Maybe it’s for some other make of car?
Peter_Lloyd (Peter Lloyd) May 27, 2022, 11:41am #3

I agree Rob, it would solve the interference problem for spare wheel removal. If there is no definitive confirmation from any of our SS/IV readers, it would have to be assumed to be applicable to another make.

There will, no doubt, be historical discussions on this forum about the lack of clearance for spare wheel removal and the associated frustrations it creates. It may be a function of modern tyre manufacture, eg a narrower carcass with the older 2 or 4 plies versus today’s 6 plies. I wonder if it would be improved if the body was mounted as high as possible on the chassis cleats. If I were to do a body-off rebuild - which I won’t be doing - I would explore this approach.

These brackets are not used in the SS Jaguars up to the end of MY1939 but the MY1940 cars are much more alike to the MkIV so perhaps the smaller ones were used in MY1940???

That said it looks as if this MY1940 car has the MkIV brackets. 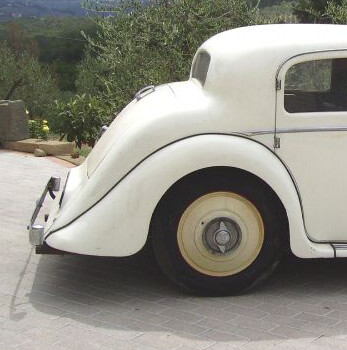 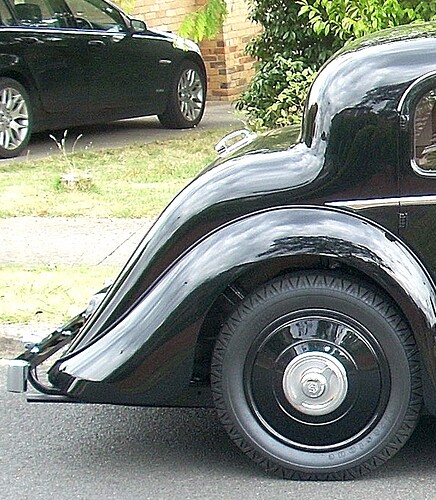 So far we haven’t been able to shed any light on the mystery brackets. I wonder, considering the ‘kissing-cousin’ relationship with the Standard Motor Company, if it suited a model of Standard, as there could have been some similar chassis details.

Bumpers and attachments like brackets would be a third-party (or is it second-party?) supplier so it could be anybody’s guess as to the application for these. I need to consider moving these on at some stage and it would help to know the interest group.

That’s why I mentioned Wilmot Breeden. I thought they might have made them for SS.
Here’s what Grace’s Guide has on them.

Early 1920s C. L. Breeden joined a small company employing 200 people[1]. This was presumably Wilmot Manufacturing Co which was at Eastern Works, Birmingham.
1927 Breeden converted the company into the Wilmot Breeden company at Eastern Works (see advert), to make metal goods, including motor accessories.
1933 Claimed to be the largest maker of bumpers in Europe; supplied a range of components to Standard Motor Co[2]
1936 Supplied chromium-plated bumpers to Standard[3]. 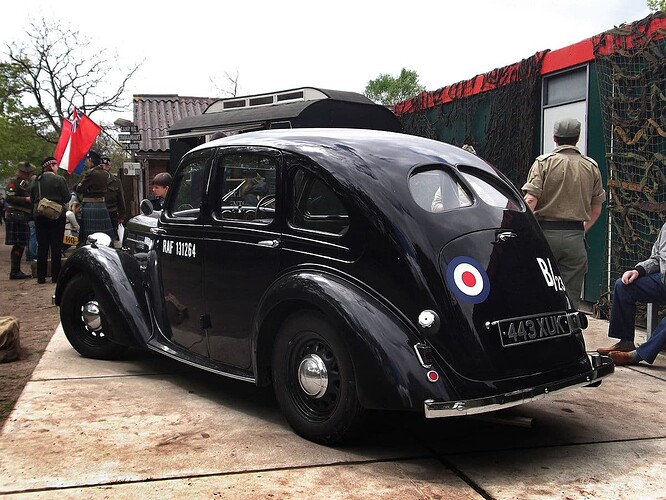 A good source of accurate period information on suppliers to SS Cars and later Jaguar Cars is within the two British weekly magazines - AUTOCAR, and MOTOR. When there is a major editorial feature, such as the next Model Year release for say SS Cars for the 1940MY range of SS Jaguar cars, as within Autocar July 28th, 1939, there is usually a major effort to approach major supplies to take out adverts…

See attached advert for Wilmot-Breeden in the July 28th, 1939 issue of Autocar… 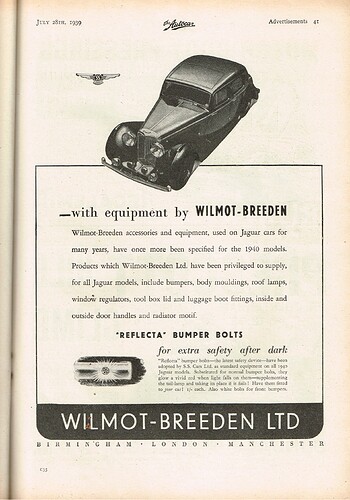 Note all the items that Wilmot-Breeden supplied SS Jaguar at this time, but conspicuously all chrome moldings, fittings and indeed BUMPERS…
But no, I don’t believe Wilmot-Breeden ever supplied the Bumper-Bar irons, certainly definately not in 1939/40, and unlikely any other time… Bumper Irons was a totally different type of manufacture, more likely made supplied by SANKEY or RUBERY OWEN at a guess…

It would be a nice finishing touch to have those ‘Reflecta’ inserts for the rear bumper bolts. Only a shilling each too! Reflectors were an optional extra in those days as they were not compulsory. I’m sure they would not be difficult for an appropriate manufacturer to replicate.

What are the ‘white bolts’ for the front bumper? They could be an easy replacement bolt for a 1.5 but the sixes would need holes drilled. They are probably intended to provide improved visibility when parked, particularly when parked on the opposite side of the road. I don’t see how they would provide better visibility than the reflectance from the chromed bumper and headlights. It could be a carry-over of the thinking about the white embellishments on cars during the war in the times of low light requirements.

We always find something new to pique our curiosity.

‘white bolts’ for the front bumper

Perhaps they “glow a vivid white when light falls on them.”

Back to the original question, I’m still inclined to think they are a Wilmot Breeden product, supplied with the chrome bumper and made to a standard bolt hole spacing, which the chassis maker would drill or punch his holes to match.
Reference the Wilmot Breeden bumpers supplied for Mark V, pg 76 of the SPC, Body Section, the assemblies have part numbers in the O.xxxx format, and all the separate bracket parts are also numbered with O.xxxx, as opposed to the BD.xxxx format of most other body parts, suggesting that WB was making the steel structural parts as well as the chrome parts.

Wilmot’s made bumpers and brackets for a number of British cars of that era, including Alvis, Bentley, Wolseley, and Jaguar. 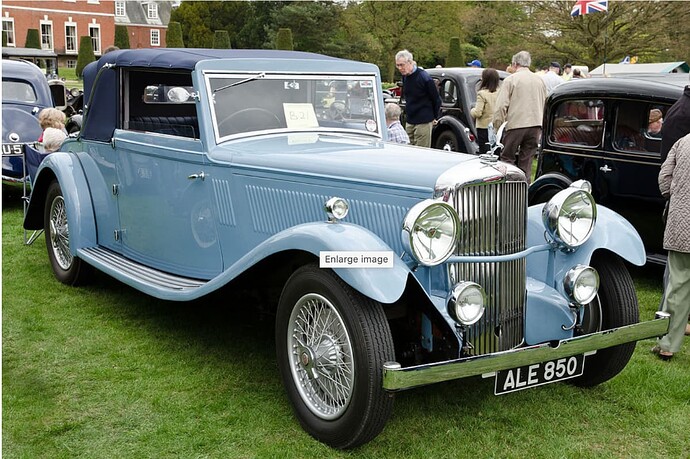 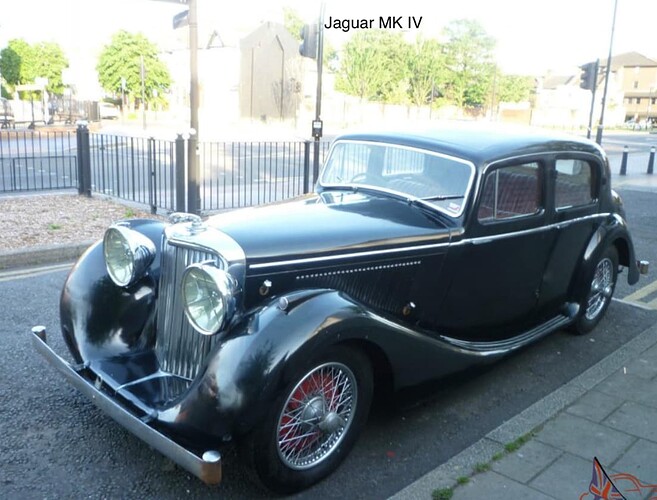 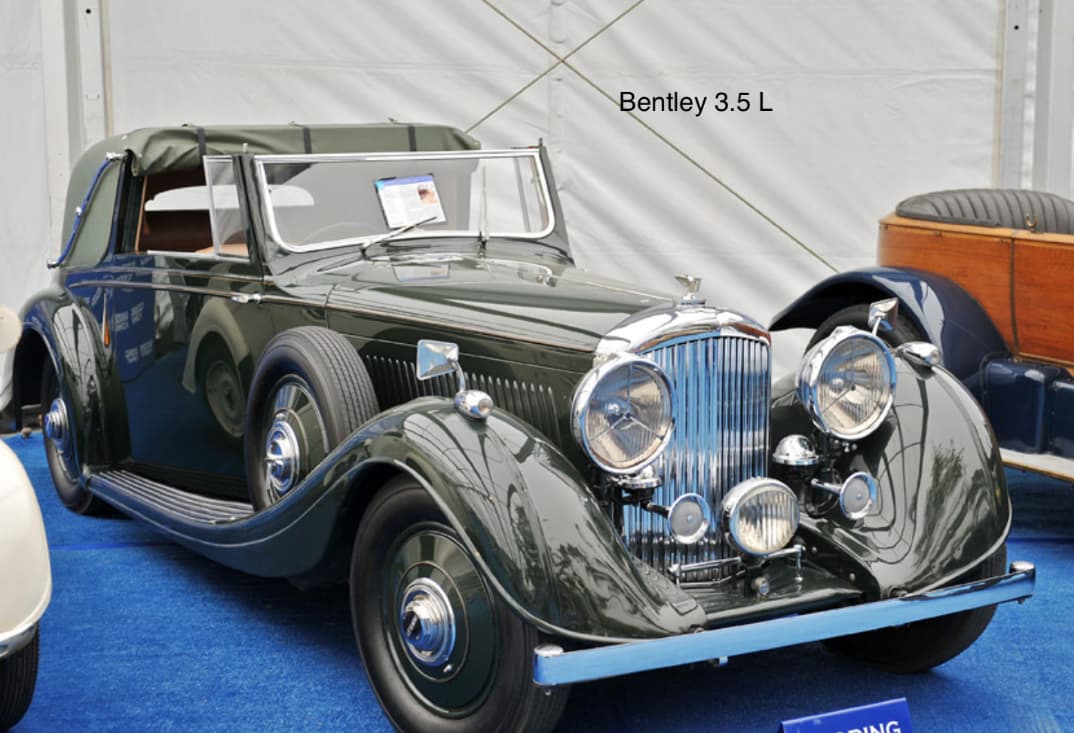 The brackets on the original post pictures are of the same shape and holes. So my thought is based on my restoration of a 1948 MK IV 1.5 litre SE - the 1.5, 2.5 and 3.5 MK IV’s look similar, but the physical body sizes are NOT the same. The 1.5 is smaller, the bumpers not as wide, the body panels different shapes, etc. So the majority of body parts are not interchangeable between the engine size models, and the bumpers and brackets are therefore different sizes (but look very similar).

My thought is the brackets could well be off the different Jaguar varients of the engine sizes, with the shorter curve bracket off the 1.5 litre.

In the all steel cars the 1.5 litre does share the same body from scuttle backwards but has a different chassis with less length in the engine compartment. It also doesn’t have the harmonic damping front bumper. 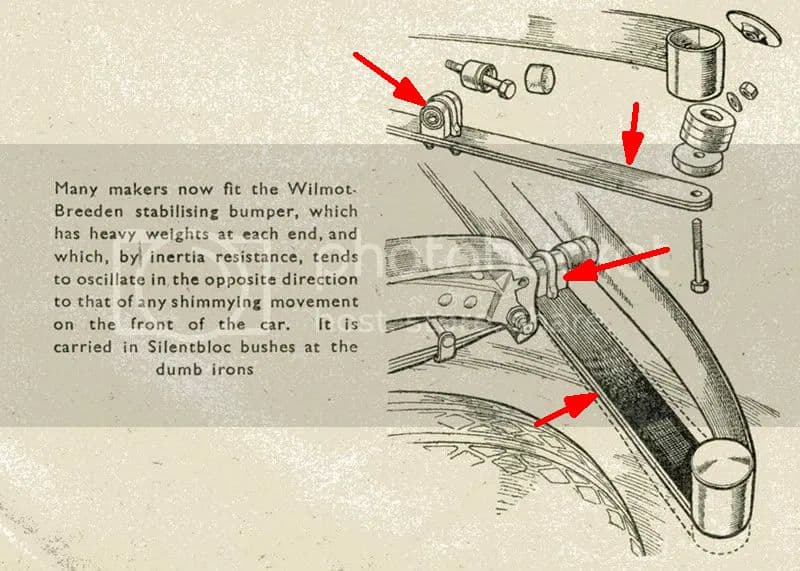 The standard 1.5 MK IV did have different bumpers (with smaller ends) as shown in the 2 pictures below: 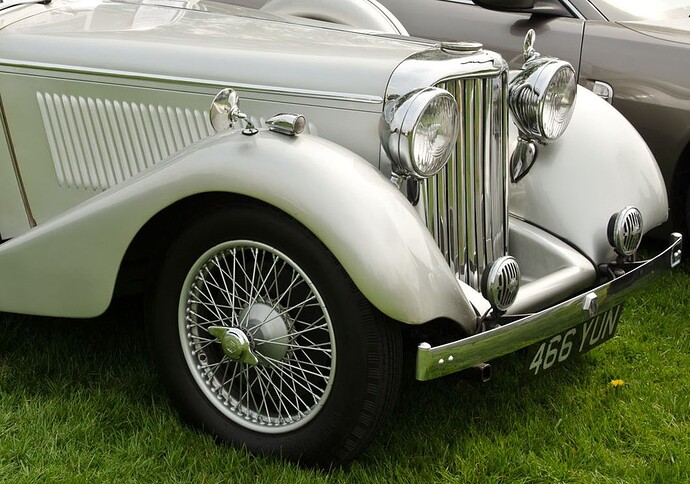 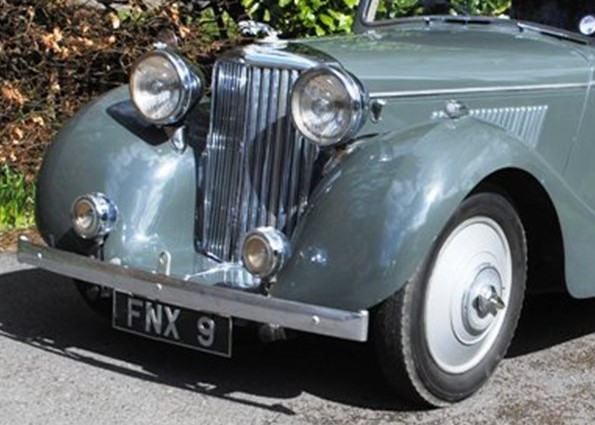 But as I understand it, the 1.5 SE (as part of the Special Equipment extras) had the upgraded bumpers, as shown in these other 2 pictures: 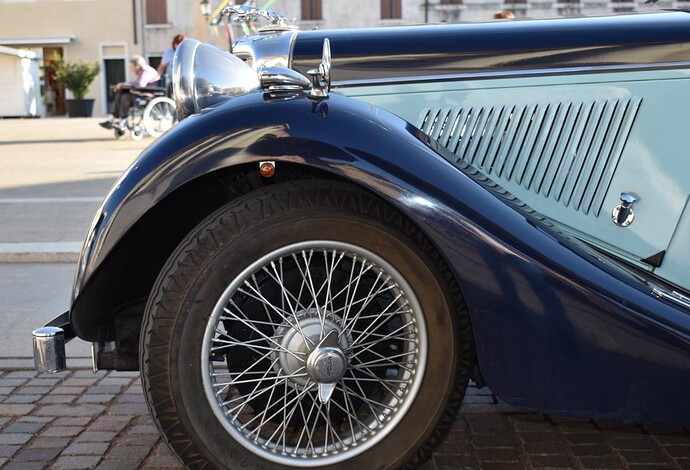 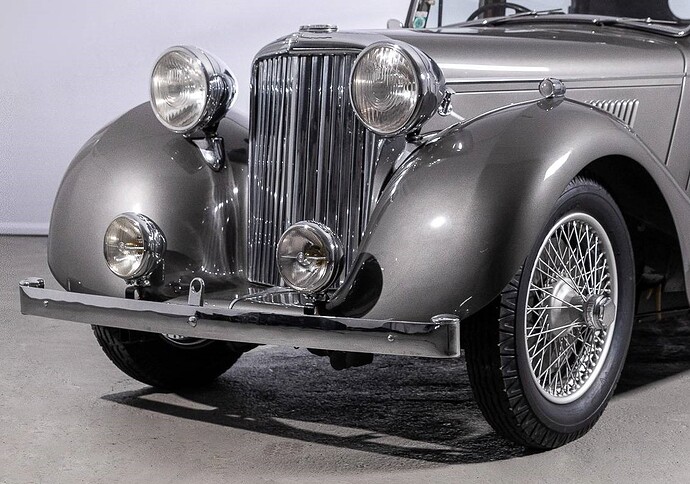 Hence the Spare Parts differences for these bumpers between the standard 1.5 and 1.5SE 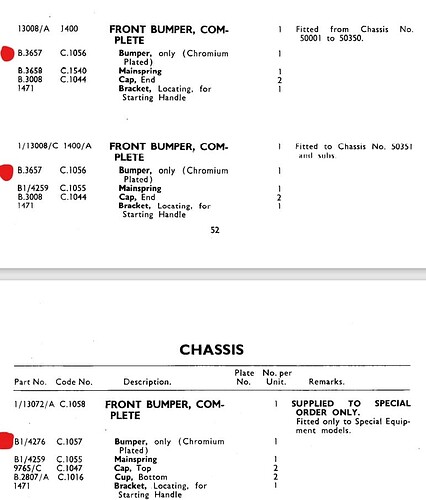 Whilst I can’t remember the actual physical differences between the 1.5, 2.5, and 3.5 I do know from the Jaguar Heritage Trust that other than the sizes in overall lengths of these cars there is definately a difference in vehicle heights and the track diamensions front and rear - which gave me the impression when I visitied them that body panels were not interchangeable between the 1.5 and its bigger brothers. I’m not sure if these size differences alone would result in a difference of bracket height - unless it was to get all bumpers positioned at the same road height ?

Perhaps a clue might be in the 2.5 or 3.5 Spare Parts Catalogue if anyone has them, to see if the bumpers are different codes to the 1.5SE (which might indicate different sizes and hence different brackets required for the different chassis types).

A big part of the raison d’etre for the all steel 1.5 litre was to increase the production numbers of the bodies of the 6 cylinder cars. The front and rear axles are different between the 1.5 and the sixes. I can’t think that there is much difference in overall height but perhaps the lower weight of the 1.5 makes it sit fractionally higher.

The Motor Trader quotes all three cars with the same height but the sixes are 6 cwt heavier.

Other way around Peter - the 1.5 is lower in overall height than the 2.5 or 3.5 (from memory about 1 inch lower) and the track width about 2 inches narrower front and back.