It appears that you already have the locking pin out - did it come out entirely or any chance it broke off? If not, the pivot pin should tap out, but I’d let it soak with penetrant first. On mine, I had the pedal box off, but there was no wear and the spring was good, so I didn’t try to remove the pivot pin.

The one issue you might have with the S1 XJ parts is that the booster actuating rod will likely be retained in the booster, unlike the original Mk10/420G booster that has a loose rod. This makes it very difficult to add the booster with the pedal box in the car unless your box has the added hole - it’s practically impossible from inside the car. It does seem that your car has this access hole in the pedal box so maybe someone else has already done that for you. Probably easier to add the booster and master cylinder to the box before you install it, but I can’t remember exactly what the most efficient order was.

Thank you Ron, its out. I was aware of screw it up, but it was really just a pin. So lubrication, heat, Hammer, piece of steel, force and patience… I need to dismantle it all as my pedal box is bit corrupted and on thread is cracked… Need to fix it somehow now… 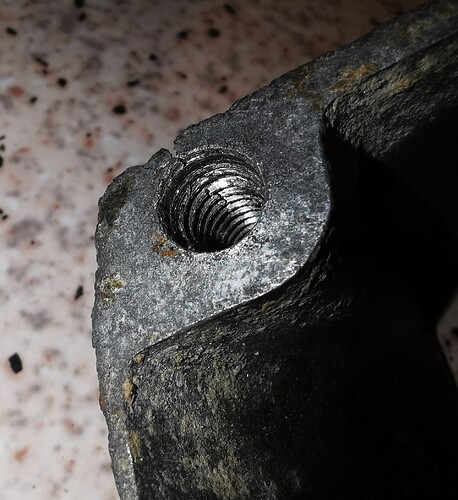 I still try to stick with original P90 and pedal box, as it was in my car. I agree box and booster need to be binded before it goes to the car…

By the way, as weve discussed booster options earlier, i recently found out this link
https://www.martinrobey.com/jensen/interceptor/interceptor-i/braking-system/brake-system-early/16001

Booster is mentioned to be for Jensen cars, but i do believe its the same booster as for our jags. I have two P90 spares and i should be able to build one functional from that parts on my own. If not, ill give it a try to contact Martin Robey…

That a good plan if you can get the kit. I think you will find the P90 parts to be unavailable. If you do find it, think about getting two for the next time.

I would think getting the box welded would be best, although you could probably get by with it. If you bond it and it fails, you make future welding more difficult. After welding, it becomes a machine job to restore the thread, so a bit of work there.

I didnt find any, but i have usefull parts to complete one booster, so hope it will last some decade… If not, MR rebuild is the possibility…

Welding is the first option, but i have to make metric thread than, UNF is not available here and is uselless to buy some tools just for this… But i also started to think about “liquid metal” , seems to me that thread could be kept if repair is done carefully. I dont have any experience with that though…

In that case, I’d just epoxy the stud in and call it good. I doubt it would ever loosen with other studs intact, but it’s not that hard to remove for a bigger repair later if it needs that.

, I’d just epoxy the stud in and call it good

Just glue it in and only do it up gently.

So, im waiting to recieve back cleaned pedal box, master cylinder and some other minor parts, already bought an epoxy glue for aluminium and ill let know the result. Meanwhile, i finally rebuilt my P90 booster and it seems it holds air correctly, so i do believe it will work properly on the car… Im so curious… 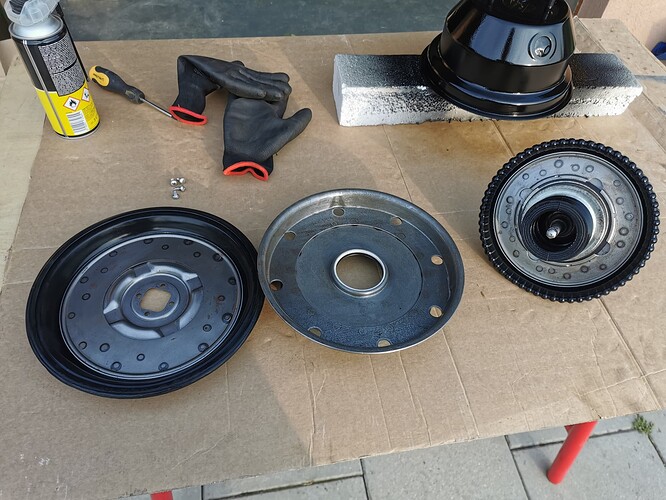 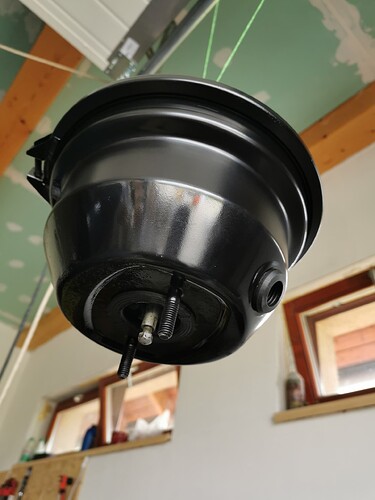 can you confirm if/where you obtained the seal kit for the P90 booster ?

As you may or may not know, the 65-67 cars also have a unique master cylinder

But there is some confusion about the seal kit, I think it is very similar to the later 420G
units, although they are different part numbers

I had no kit, I bought two P90 through the time and I was lucky enough to put together one functional from those two… But, as I wrote it somewhere here earlier, I do belive Jenses Interceptor MK2 had the same booster. And I found out, that Martin Robey could rebuilt it…he doesnt sell any seal kit officialy though. To be honest, as those inner metal plates are welded together, I wouldnt be able to change seals on my own either…
https://www.martinrobey.com/jensen/interceptor/interceptor-i/braking-system/brake-servo-unit/16001

Regarding master cylinder, I was already recommended with wrong kit by Jag dealer, even I send him picture of my master cylinder. Again, master cylinder on my car is, I do believe late 420G, early S1 (see picture few posts earlier in this thread)… Im not sure its original, but it was already in car at least in 1980s (i have some photos). And again, its the same as was in Jenses interceptor and these rebuild kits can be obtained yet… 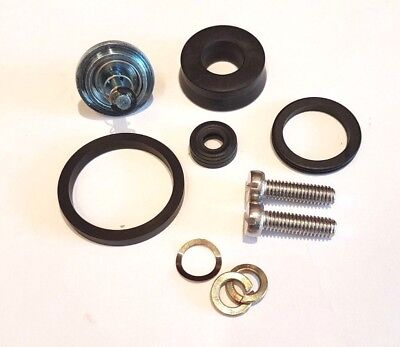 I didnt think the S1/420G master cyl is compatible with the Dunlop P90 Booster.

The later booster is known as a Girling 100 Supervac

When my 420G master cylinder was re-sleeved, I provided the correct part number 68-70 MKX-420G seal kit to the sleever, (same as a Ferrari Dino) but when it came back, no fluid could be expelled from the rear port. I sent it back and he reported the fix was to fit the 65-67 seal kit.

I have the part numbers somewhere, which are also probably available on Google/Ebay

I suspect the MC bores are the same diameter

I suggest study and measure the old seals very closely, and compare them to the new ones

Well, obviously should be, brakes were functional (without booster, due to lack of vacuum). But im pretty sure now its some kind of olden 70/80s upgrade. 1. There is some unoriginal piece between master cylinder and booster which make that MC fits to BB piston. 2. MC on my 420G has later number (even its not stamped correctly) than MC on S1 BB i bought on ebay… 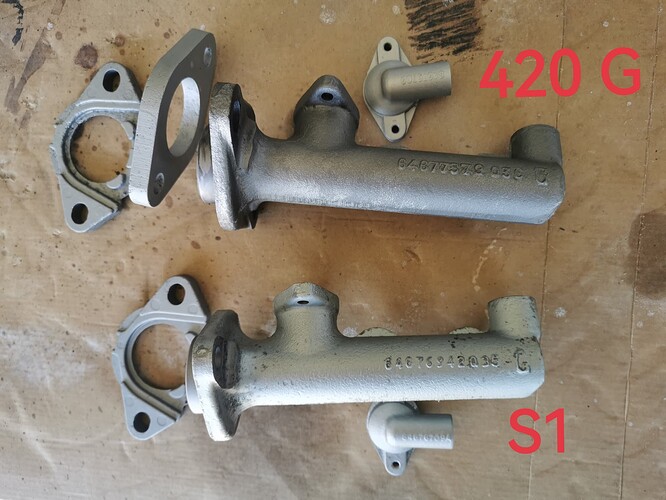 On the other side, the part of S1 MC which sticks to BB is a bit more narrow as well as the holes for screws, and the B output on MC has bigger diameter than A output (on 420G MC they are the same) so they are not exchangable for 100%. So i made it somehow together, flow on A, B parts of MC seems fine as well as vacuum hold on BB, on the other hand, im unable to press the BB even with the weight of my body, which i was able before putting MC on… Im not sure if thats the problem or pedal lever will have more power when pressed? 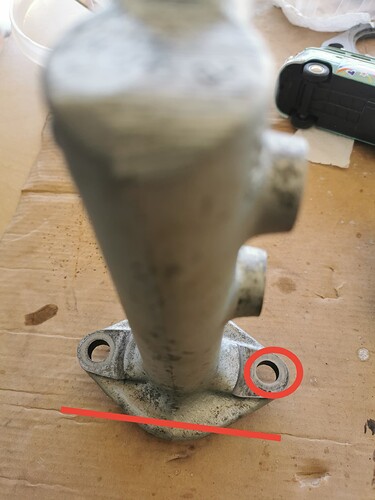 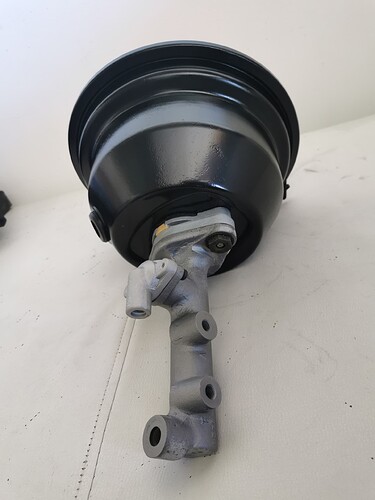 here is an excerpt from the MKX 4.2 Parts Manual, showing the piston protruding from the MC (item 26) 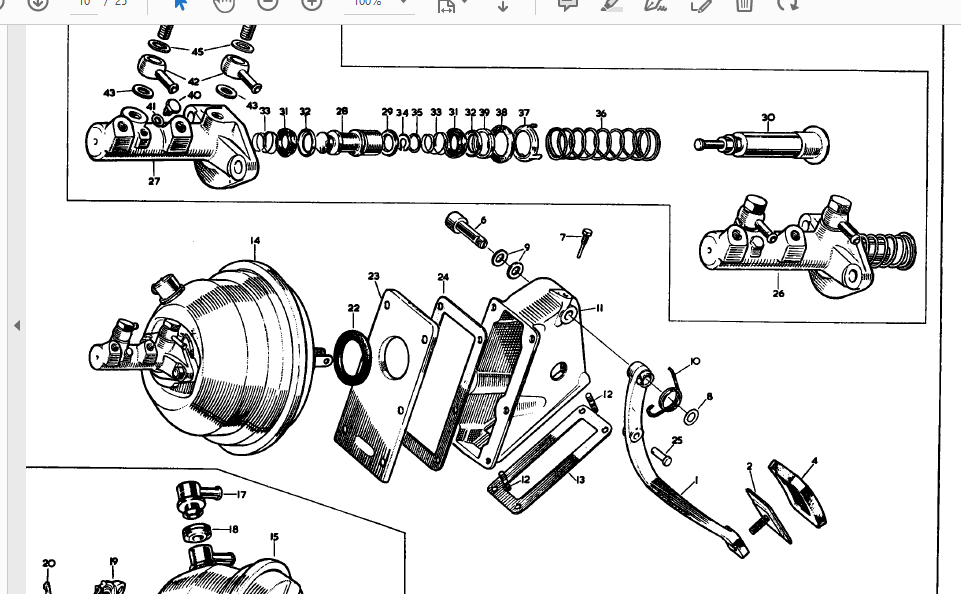 I went through this with someone once before on their 4.2 MKX, they could not get the MC and booster to actuate properly. The plates may be an attempt to make that work

does the master cylinder piston compress and expel fluid from front & rear ports ?

Its important to bench bleed the MC before fitment, and it helps prove out faults, such as the one I mentioned earlier (no fluid from rear port after rebuild)

I have pics from Octane magazine of what was described as the best quality MKX resto, and it had the same booster as yours, so I thought they must have somehow gor the parts to rebuild it

Yes, i know the manual, as i wrote, i do believe its not original MC, but its already on 80s pictures, so i also do believe this combination has to work (also i drive the car and brakes were functional, without vacuum). But I cant press the BB by hand now (I dont know if thats correct or wrong), so im not sure, if it expel fluid or not, i only blow air through and A and B part are separate tight. I didnt bench bleeded it yet as i want to redo pedal box first and do the bleeding just before returing BB back to car as a complete piece…

Sorry for a dumb question Tony, i had no time to closer examination earlier and im doing this for the first time… but i got it now! Just as simple as man has to stop and thing for a while… I made the basic mistake, exchanged inside pistons from those two MC and of course, they are the same, but not of exact diameter. The first one fitted, but very, very tight and wont move inside. So i changed the piston and now everything works perfectly. BB moves freely, when i close BB vacuum output, it holds air and wont move. Thanks for your advices and thoughts, which gives me the right direction and keeps me motivated. The only thing im not sure, that the valve inside MC input A is wiggling when piston moves. Unfortunatelly cant post a video here but it can be seen its not straight in the middle when piston is not pressed… 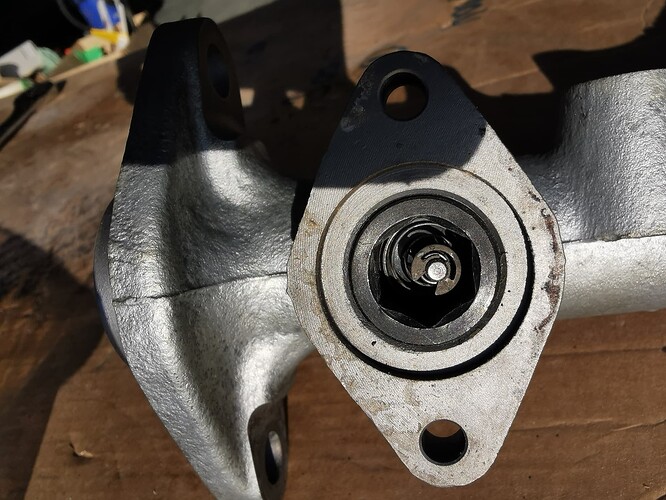 I think that valve is supposed to have some wiggle room, just be careful not to lose the tiny parts when taking things apart !

I dont have any hands on experience with the “early” MC

are you saying the you interchanged pistons from the 420G and early MKX MC ?

(but that it was too tight so you swapped them back) ?

I would certainly bench bleed the MC, as you said, probably be easier once the booster and pedal box are attached.

It can be done on the car, just attach the brake lines, but do not do them up fully, use lots of towels and plastic sheet so no fluid can get on your paintwork

I interchanged pistons from these two MCs i have, pictured above. They seems to be the same (except small difference mentioned), but each piston is probably manufactured for exact MC? Ive read this about carburetters, that their pistons are also not exchangable… Those MC pistons looks exactly the same, but theres like unseen “0,01 mm” diference in diameter which makes a huge difference when put into MC…

Ok, I read back thru the thread, which is quite long, and it seems that you never had the correct master cyl to go with the P90 booster, but someone has adapted the 420G MC to the Dunlop P90 booster before you got it ?

That was causing me confusion

Sounds like you are on your way to getting it working

Be aware the 420G/S1 MC has a stepped bore, and requires a specialist to re-sleeve in SS, which is usually required to my understanding

mine looked fine to me, but my brake expert stated it needed sleeving, which cost me about $150

I have seen the correct 65-67 MC available on Ebay occasionally, and the rebuild kit as well

also had my Girling Supervac 100 rebuilt, which cost $400, with “not Chinese crap”

but each piston is probably manufactured for exact MC? Ive read this about carburetters, that their pistons are also not exchangable… Those MC pistons looks exactly the same, but theres like unseen “0,01 mm” diference in diameter which makes a huge difference when put into MC…

The SU pistons are made to seal very tightly without any rings or seals. Metal on metal. This is why they are matched and must not be polished.

The master cylinder uses rubber seals so the machined parts don’t need a close tolerance. If they look the same they will work. The rubber does the sealing, the metal just holds the rubber in place and transfers the force. But if one is a sloppy fit you might not want to use it, only do what you’re comfortable with.